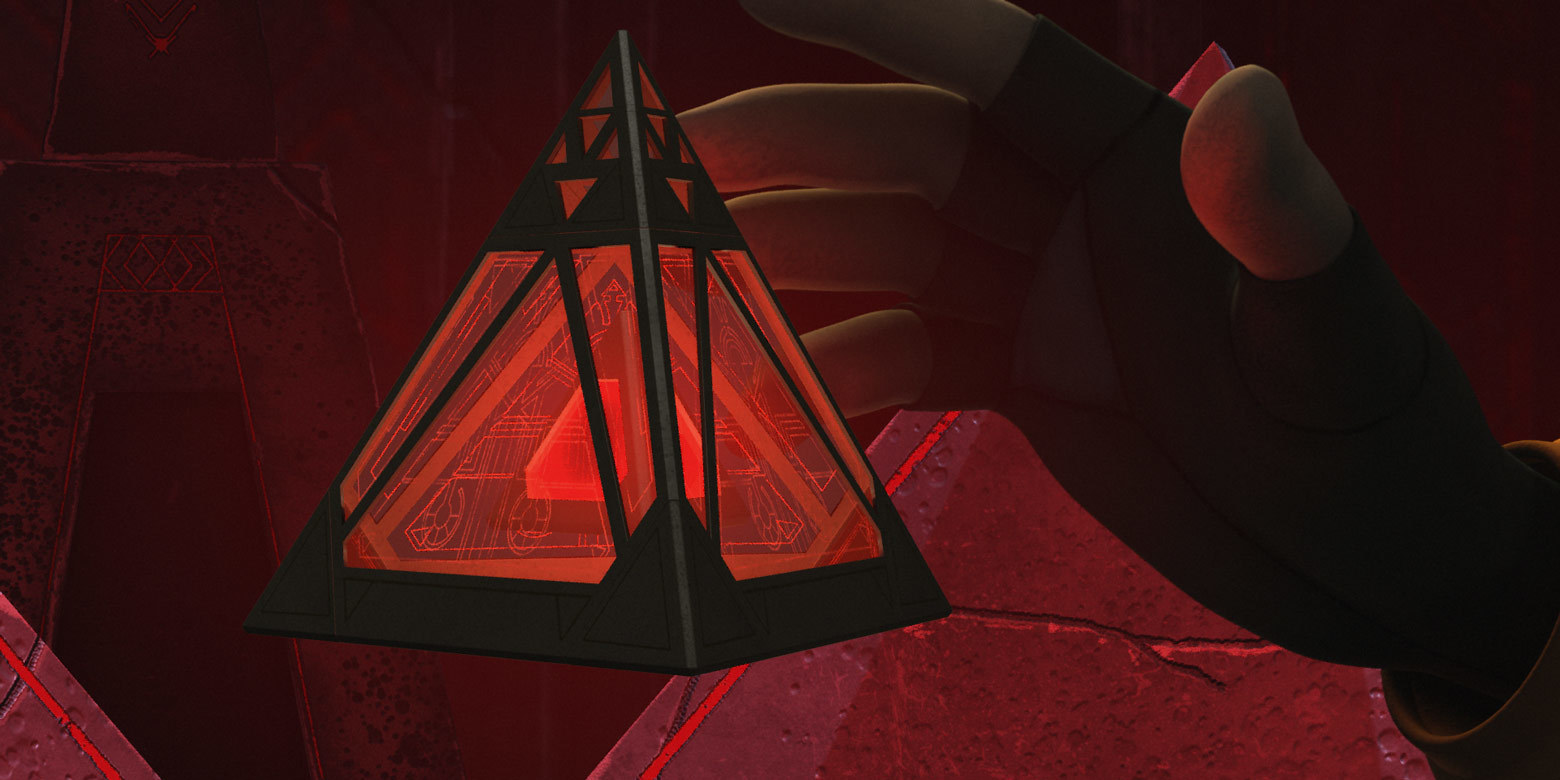 A Sith holocron, a depository of knowledge. Image: Lucasfilm

When all of our precious Expanded Universe was decanonised, how did you decide what to do with all that information on Wookieepedia?

Mike Delaney: Basically the decision was made, fairly early on, that the information wouldn't be lost, that it wouldn't be removed. Some advocated that if it was going to be decanonised, it wouldn't have a place on the wiki. That was a minority opinion. The majority of us on the site always felt that no matter what, the information should be retained in some way. It was just figuring out how that information would be displayed and kept on the site alongside the new canon information that would be brought out by Lucasfilm.

Brandon Rhea: And that was something that tracked exactly with what Lucasfilm was doing anyway. They called it "Legends" for a reason. They said these stories are still around and could still be pulled from. So Wookieepedia kind of adopted the same approach.

How is Wookieepedia run and organised? That is, when you debated what to do with Legends, how was that decision actually made?

Delaney: Wookieepedia is edited by a large community of users from all around the world. We have administrators based in England, Finland, Australia. When it comes to a decision like that, usually the more active editors and administrators will discuss it in a big forum and come up with potential ideas. And then those ideas are voted on by the community to see which one the community wants to adopt. It's very much a community-run endeavour. While the administrators are the ones who have the power in the terms of being able to delete certain pages and block malicious users, when it comes to enacting that kind of decision, it's very much a consensus-driven decision that the community is very involved in.

I have been shocked at the speed by which things start appearing on Wookieepedia once new Star Wars material comes out. Does it surprise you at all, or is it about what you'd expect from those who edit the site?

Delaney: It doesn't surprise me at all. For example, when The Force Awakens trailer came out, there were screenshots and information from the trailer literally on the site within five to 10 minutes of [it] being released at Star Wars Celebration Anaheim.

Rhea: There are people who are so into the idea of chronicling all this lore that they read the books specifically to do that. Every [Wiki] page for a novel has a giant list of appearances saying who appears in what book. There are people who will read a book and as they're going through it, take notes about what they just read so they can update as they go and create pages as they go. There's a lot of enjoyment that people get out of connecting to Star Wars in that way.

Delaney: So, obviously with the Thrawn novel, the publishing house had several excerpts from the novel published before the book was released. And we had users making articles just based off of those excerpts.

Why do you think so many people enjoy cataloguing all of this information?

Rhea: There's a term I came across at one point: Emotional continuity. It's basically that people relate to their fandom by knowing everything. And the more they know, whether it's what this character did or how this engine from a comic 30 years ago works, the more real those things are to them, the more real Star Wars is and the more they can connect to it.

Delaney: For me, I think it's more about the world-building aspect to it. Star Wars for over 40 years now has been publishing material. And the idea is that most people would never have had access to a lot of the old material, which might be old newspaper strips or RPG sourcebooks which are now out of print. And the idea is that there is so much information that one person cannot know it all. So we look to put it all together so you don't have to remember it all. But we have the information if you want.

You mentioned the idea of relating to something by knowing it. The internet brings a component of sharing information that is a whole other level.

Rhea: I think they're all bonded by the fact that they all like knowing these things and sharing is just — we're social creatures, and anything we like doing, we like doing with other people. And this is just a way to do that.

Delaney: You can come together with other like-minded people that you may not even be able to meet in real life. So the idea is that if you can meet these people online that you can kind of share stories with, you can find friendships and community you may not be able to find anywhere else.

Rhea: Fans end up bonding with the material through these things, too. Like Felicity Jones for Rogue One said she turned to Wookieepedia for research. There's an element of pride that goes into this, too.

On occasion, we've been asked by some of our sister sites if Wookieepedia is reliable and we always say yes.

Rhea: It's funny, the other day on Twitter, because Wookieepedia has interactions with other Star Wars authors and creators, and somebody kind of questioned if Wookieepedia would be an accurate source and the guy at Lucasfilm, Leland Chee, who runs their internal database, said he would caution anyone against questioning whether Wookieepedia was a legitimate source or not.

One of the things that's most interesting about Wookieepedia is that it's the best-sourced fan wiki out there because everything is cited so thoroughly and accurately. Is there a reason why Wookieepedia is so meticulous?

Delaney: It's a personal stylistic choice that was made when it was set up simply because this information is scattered over so many different sources and there had to be a way to check it to make sure that no false information was being included. Being a wiki that was open to anyone to edit, false information could be edited and sometimes could slip through. By having it sourced it can be independently fact-checked, you can mark it for deletion or tell if the source doesn't exist or doesn't cover what that kind of information. It also legitimised how accurate we are and made us a place where Star Wars fans can go and know that we are correct.

Has there been something that has caused consternation about what Wookieepedia should do with it?

Delaney: Off the top of my head, Captain Phasma's image. Captain Phasma was obviously on the front page of Vanity Fair, unmasked for a photo shoot. And that got sourced as what she looks like in the film. And someone found a tweet about something Pablo Hidalgo might have said at a convention that hinted that it might not be a true representation of who she was. And there was a lot of back and forth about what he meant by that and should we include the information or not. And whenever something like that comes up, we encourage people to talk about it and try to contact the parties involved and reach the best solution we can.

Rhea: Images in general can cause that sometimes. For Kylo Ren, do you use his face or his mask, which one do people respond to more? Should Obi-Wan be Alec Guinness or Ewan McGregor? Those kinds of things come up sometimes.

Do you have a favourite bit of Star Wars trivia?

Delaney: Actually no. Brandon, do you have any?

Delaney: You'll find that that has been dropped from the new canon, they have a new name for it now.

But then you lose one of the best jokes in Star Wars Legends!

Delaney: The refresher course. From Starfighters of Adumar, one of my favourite books.

Do you feel that getting rid of the old EU canon has made the universe smaller or larger?

Delaney: For me, it's made it smaller. For the simple fact that I don't have an interest in the new canon any more, the way I did for the Legends continuity. Basically, when the Legends stuff was coming out, I had a sense that I had to have it as soon as possible and I had to devour the text to find out what was going on in the story. I don't have that urgency any more. I still read it and watch the shows, like Rebels and the new films. But there doesn't seem to be, for me, that urgency any more. To discover where the story's going beyond the main stuff, whereas with Legends I was interested in all the side stories.

Rhea: For me, I don't think of it in terms of bigger or smaller. I was never much of an EU fan. I thought most of it was weird and didn't feel like Star Wars to me. And the reset feels more authentic, in the sense that it's consistent and there's one overall vision, rather than, "Here are the movies and here are 20 other people's interpretations of what Star Wars is." Like we kind of know tonally, stylistically what we're gonna get. And I like that, and it feels like Star Wars to me.

That is exactly the split I've seen with other fans.

Delaney: Me and Brandon, our differing views are very indicative of the views across the site. We do have contributors who are into canon, we have those who are into the Legends stuff and will work on Legends, where I work. And we have those who have come to the site since the new canon has started. Because they know they don't have to sort through 35 years of back issues of comics and magazines to complete an article.

There's no wrong way to be Star Wars fan, don't you agree?

Delaney: Absolutely. We have people on the site, for instance, who've read the books but not the comics. Or they played the games and not read the books. And it doesn't make them any less of a fan in anyone's mind. That's what they're interested in, so let them be. They're all Star Wars fans at the end of the day.

This interview has been lightly edited for length and clarity.