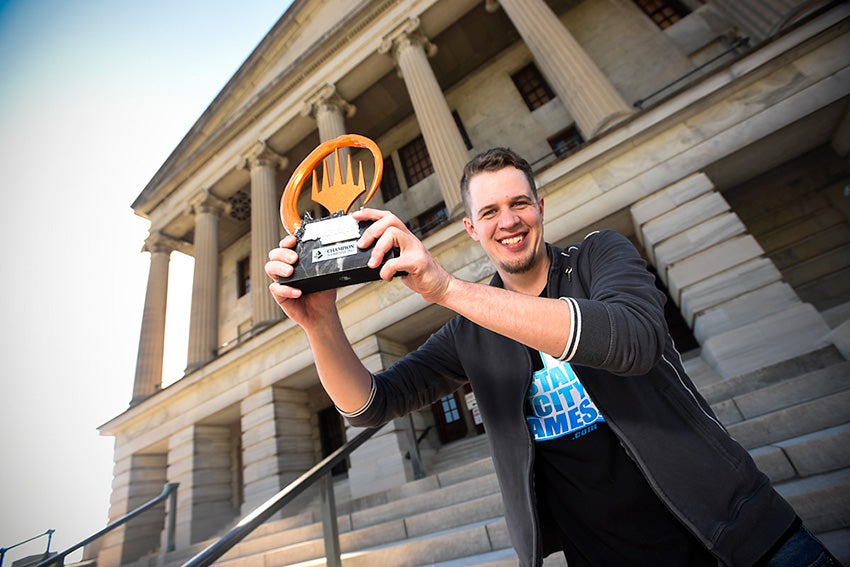 On May 14, Magic: The Gathering pro Gerry Thompson won Pro Tour Amonkhet, securing one of the most coveted trophies in competitive magic play. Five days later, he put that trophy on eBay, along with some other event swag, with all the proceeds going to benefit Planned Parenthood.

Photo: Wizards of the Coast

"I strongly believe in what they do and the care they provide," Thompson told Kotaku. "With their funding under attack, now is the time when they need help the most." The auctions raised over $US6000 ($7915) for the women's health group.

Thompson is a well-known figure in the world of Magic. Prior to Amonkhet, he'd already taken several top trophies; he's also a well-known strategy author and podcaster. He knew that his choice of charity might generate backlash, since Planned Parenthood is a political lightning rod. But that was all part of the plan, he says: "The more people are talking about it, the more it gets seen... But is the fact that this is controversial and going to alienate people a big enough reason to not do this? No, I'd rather it go to the thing that I most want it to go to."

Magic player Emma Handy said that Thompson's donation was a rare thing for the Magic community. "I hadn't seen anything like this in my time as a competitive Magic player," she said. Handy, who is trans, relies on Planned Parenthood for her hormone replacement therapy. The organisation, she says, "makes treatment available to many people, myself included, that wouldn't otherwise be able to afford the healthcare they need."

While Thompson, who began playing Magic competitively around 2002, has found the community around the collectable card game to be his "home", however he eventually realised that wasn't the case for other players around him. He'd notice that women who came to his local hobby shops once or twice to compete in tournaments often never returned.

"I can certainly imagine that if you're a woman going into a local game store where there are 30 males and they're not welcoming, why you might not go back," he said. "The game is good, but it's not that good. It's not good to suffer through while you're also trying to play."

Thompson doesn't exempt himself from that. "I feel shitty, for sure. I definitely did not used to be what I consider a good person," he said. "Like: 'I lost to a girl.' I definitely remember saying stuff like that in the early 2000's."

Today, he says, "I'm more likely to take a hardline stance against [harassment]... I go to tournaments to compete and hopefully win, but I'm also there to make sure people are having a good time."