My Search For The Best Kart In Mario Kart 8 Deluxe 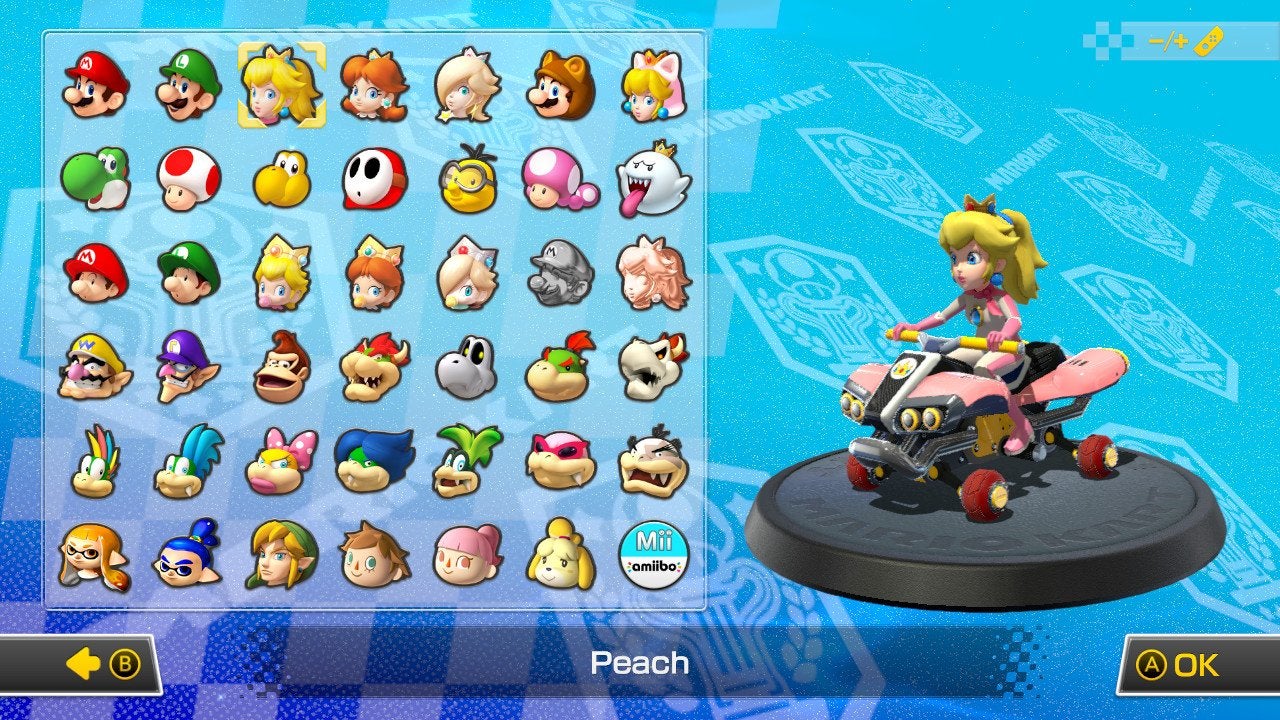 This used to be my favourite kart. Turns out it's no good in high-level play.

I wanted to find the best kart to use in Mario Kart 8 Deluxe. Easier said than done.

No one can build the best kart immediately. This game starts out by providing you with all of the racing tracks and all but one of its characters (Gold Mario, who has the same stats as Metal Mario), but many of its karts and kart parts are initially locked off. Players need to collect coins in Grand Prix races or Battle Mode to unlock all of the kart types and accessories. The more coins you collect, the better karts you unlock, of course.

Once you unlock everything, Mario Kart 8D has 40 vehicles, 21 tire varieties, and 35 gliders. There are 16 characters to choose from, each of whom has a different weight, which affects your kart's stats. That takes time.

It took me about 60 hours to unlock everything. You can probably collect 5000 coins in less time than I did if you grind in Battle Mode rather than in Grand Prix races, but that might make it feel more like a chore.

On the kart-building screen, you can click on the Switch's plus or minus button in order to see statistics for every build. It's hard to figure out the best combination on this screen. You can't compare kart parts side by side, and some kart statistics aren't shown in-game.

There's a better way: this fan-made MK8DX Builder tool, which allows players to build hypothetical karts and compare every statistic attached to each one. 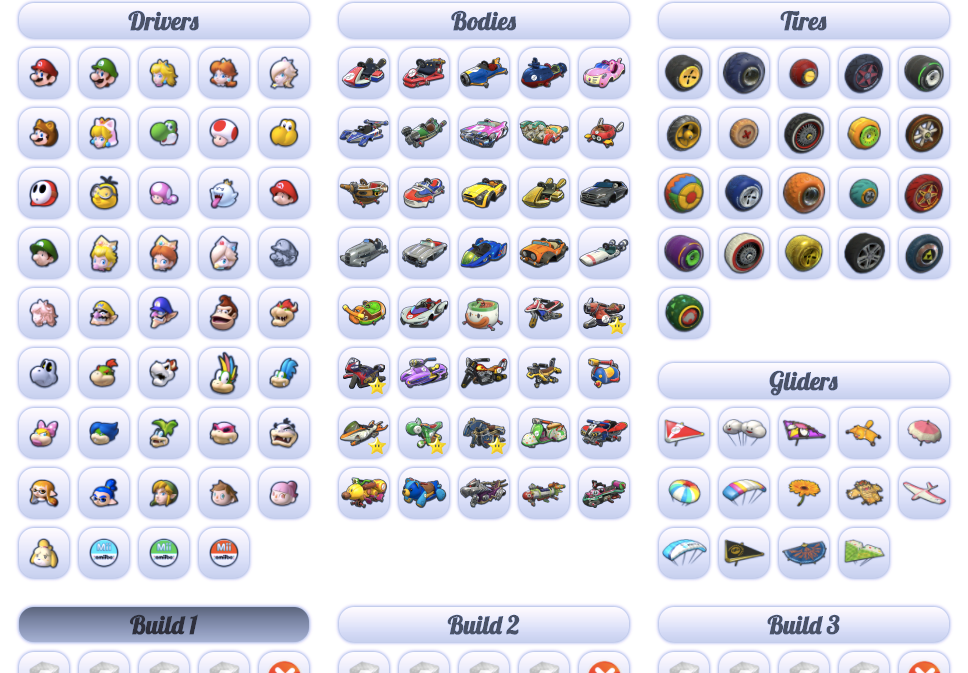 When I found that tool, I figured my search for the best kart had reached an anticlimactic ending. All I had to do was put together the best build based on these estimates, win my races, and I'd be done! Easier said than done.

When I first started out in Mario Kart 8D, I played as Princess Peach in an ATV with purple Cyber Slick wheels and a super-cute pink Plane Glider. I chose this kart combo because I wanted to play as Princess Peach and, more importantly, I wanted my build to look adorable. In selecting my kart parts, I only paid attention to the "Speed" statistic displayed at the very top of the statistics lineup. I also like Peach's racing outfit the best in the ATV. So, this kart combination got chosen because of its speed... but mostly because of how it looked. 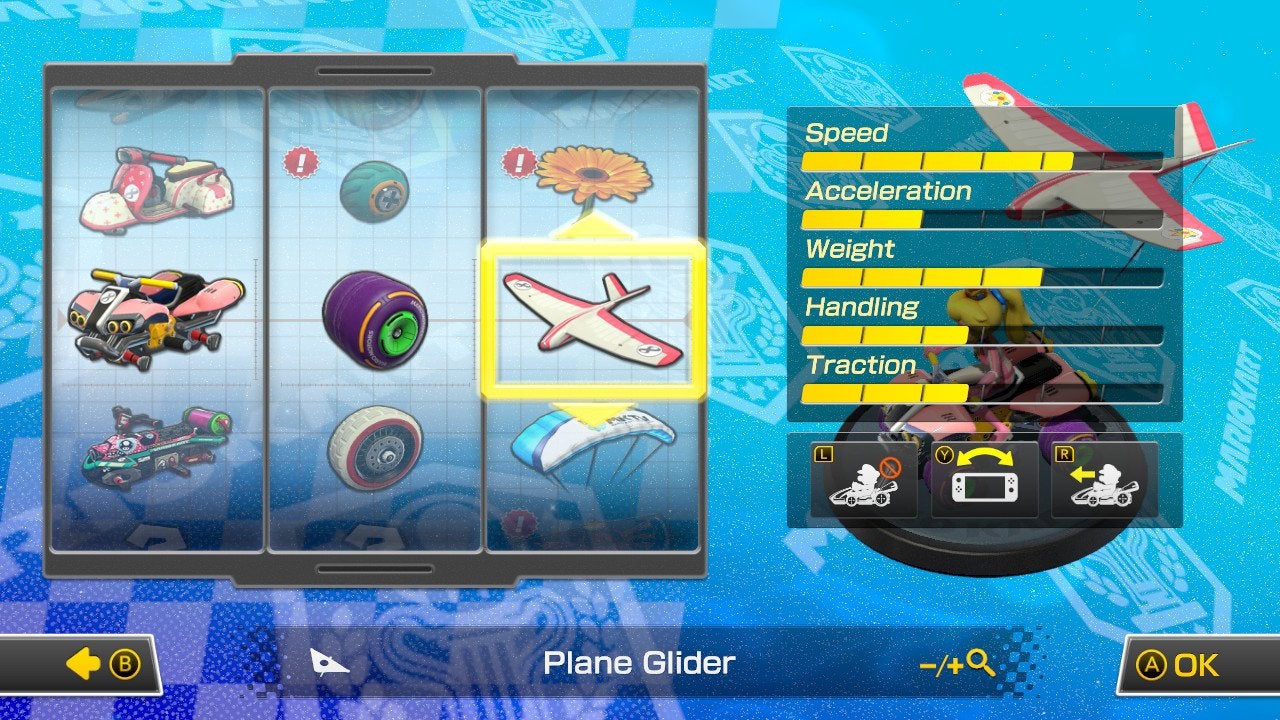 However, once you reach the 150cc-speed races and mirror races, you need a little something extra in order to keep winning. This track speed is when the Mario Kart AI becomes very difficult to beat. It's also the track speed on which most Mario Kart tournaments run, so all of the Mario Kart fandom's analysis of the "best" kart uses the 150cc courses to set parameters. 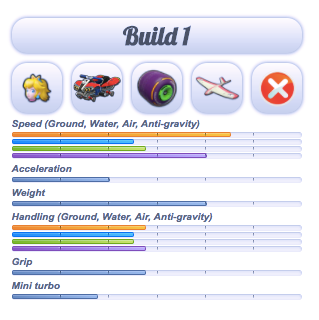 The MK8DX Builder shows a lot more statistics than Mario Kart 8D, including air speed, underwater speed, anti-gravity speed, and the "mini-turbo" stat, which refers to the speed boost you get from drifting. Here's my original build, pictured at left.

My build has a relatively high "Ground" speed, but the kart slows way down underwater and in the air. I had no idea, since the game didn't tell me that.

As for the rest of the stats here, speed and acceleration are pretty self-explanatory, but weight, handling, and the rest require further explanation. Here's the rundown: a higher-weight kart tends to have lower acceleration, but weighted karts can do more damage when bumping into lighter karts on the track.

The heavyweight kart builds usually have higher speed, presumably to offset their low acceleration rates. The "handling" stat refers to the kart's ability to make sharp turns. Grip is called "traction" in the American release of the game, and it refers to your off-road speed.

For all of these numbers, the higher the better.. It's impossible to find a kart combination with high stats in every area, but you can come close. In my fun with the MK8D Builder, I did realise that some characters are just... better than others. Peach, unfortunately, is not the best. I couldn't seem find a build for her that worked well, so I had to leave her behind.

I wanted to experience the best of the best, so I tried out this build recommendation from the MKBoards' "Competitive" forums. A user named Dused said it had fared them well in early races. It's Dry Bowser with a Streetle, Roller wheels, and the cloud glider.

This build has significantly higher weight and acceleration than the Princess Peach build I'd been racing on for so many miles. Plus, look at those grip and mini-turbo stats! I should be rocketing around the track with ease, right?

Nope. I got way worse using this build. At first, I wasn't sure why, since the statistics are so much higher. Higher means better, right?

I'm guessing I suck at this build because I've developed a playstyle that relies on a lightweight character with a relatively high "ground" speed, since that's the only statistic I cared about before. Although every other aspect of this build has more balanced statistics, the ground speed is far lower than what I'm used to. I felt slow and unwieldy. I'm not used to playing as a heavyweight character whose playstyle relies on bumping into other people. 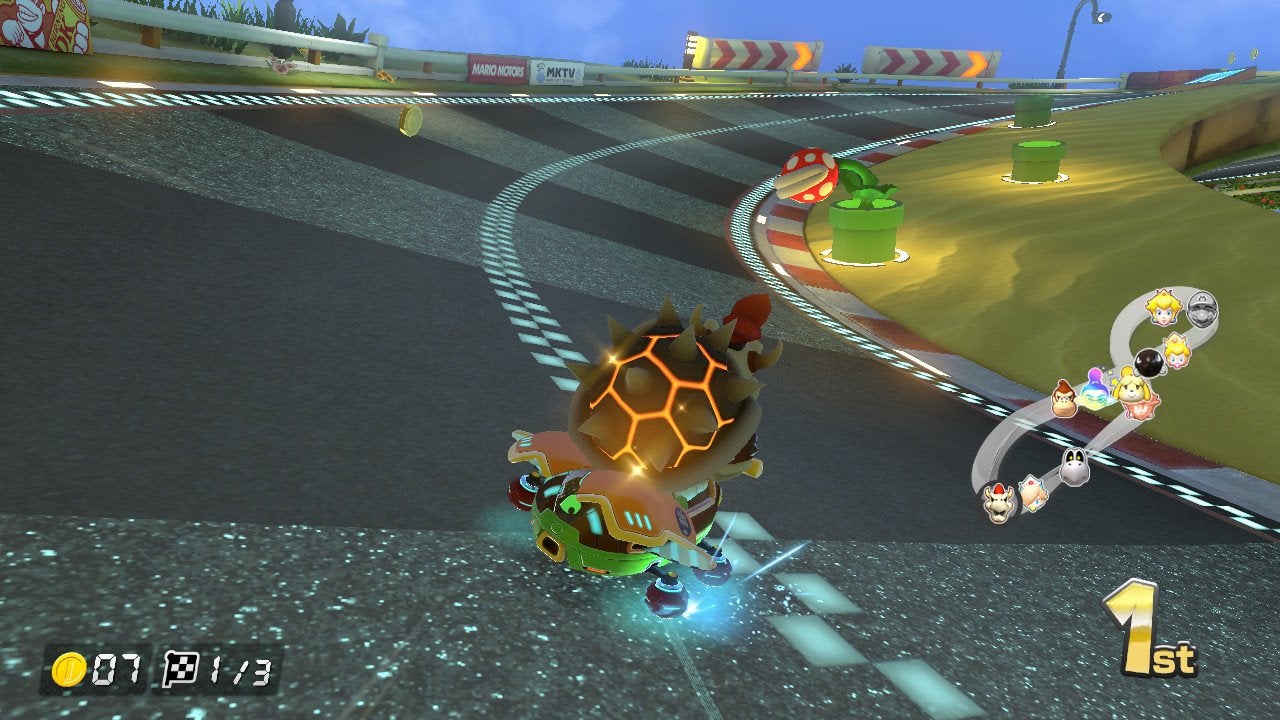 Dry Bowser on the Streetle felt like a lead balloon to me, after having played as Peach in the ATV for so long.

Heavyweight karts have historically been considered the "best" ones. In Mario Kart 8, the "best" kart combination, according to every speedy player I saw online, was Morton driving a Blue Falcon with Slick tires. That's still not a bad build in MK8D, because the ground speed is still high — but the rest of the statistics on offer aren't as good as they used to be in MK8.

In researching the "best" kart combinations, I've also realised the wealth of information available under the hood of the MK8D Builder- the type of information that makes me wish I had paid a bit more attention in maths class. MK8D Builder, which was created by Tobias Mattsson, draws its statistical information from this Google document compiled by a user who goes by Luigi_Fan2. The document does not actually include the stats from every kart, but instead focuses on the most important and viable racers in the game.

Another user who goes by MKR Bob created a Google doc based on Luigi_Fan2's data, which includes a handful of character build recommendations. The best builds as recommended by MKR Bob's document include parts that you will not unlock until the very end of your tenure with Mario Kart 8D.

Of these, Build 3 felt the best to me. It uses a W 25 Silver Arrow cart with Sponge tires and a Wario Wing glider, driven by the relatively lightweight Luigi. That said, I spent the least time overall playing these builds, since you have to play the game for a long time before you unlock all of the parts required.

So, what is the "best" kart to choose before you can unlock the actual best kart?

My ATV build for Princess Peach might be the cutest, but it's not the best. If you want more heavyweight clout to knock people around the course, pick a heavy character like Wario, Bowser, or Morton. Keep the Standard ATV and the Super Glider, since those are available early on, but choose the Roller tires since they will balance out your acceleration, traction, and handling stats.

There will be some variation in these stats depending on your character choice, even if you keep the kart the same. For example, Wario and Dry Bowser have better handling stats with this build than Morton or the "Heavy" Mii racer:

I haven't yet decided on the best kart in Mario Kart for myself, because I've learned that all of the "best" builds according to competitive analysis rely on heavyweight builds and the playstyle that goes along with that. Before I wrote this, I liked being speedy and sneaky, so having a higher speed and handling mattered most. If I get knocked back, though, it's much harder for me to recover without higher acceleration. More than that, it's easier for me to keep other players in my rearview mirror if I'm a heavyweight who knocks them down as I pass them, as opposed to speeding past without touching them.

I am not going to tell you that there isn't actually a "best" kart in Mario Kart 8D and that it's all up to you and your playstyle. That isn't true. There actually is a "best" kart, and there's also a "best" playstyle to go along with that kart, and that playstyle requires a mercenary attitude about items and player-bumping. But it's also worth noting that you will not unlock all of the parts for the "best" kart until you've played so much Mario Kart 8D that your hands feel like they're going to fall off.

Until then, that Standard ATV will serve you well. It's cute, and you can still place first consistently in all the early Grand Prix races with it. Even if you're playing as Princess Peach. If you want to get serious about this, put Dry Bowser behind the wheel and take a statistics class.