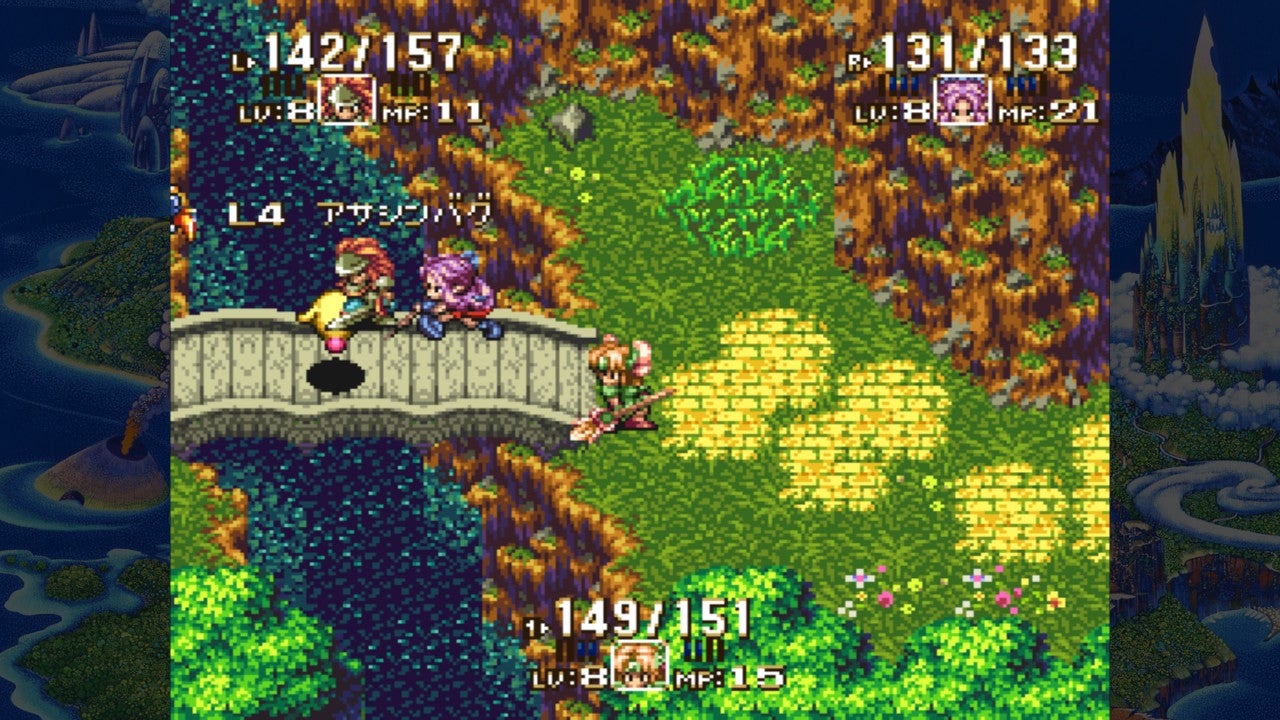 I've been playing Super Nintendo games on my Switch all week, and it is a glorious thing.

Seiken Densetsu 3. (All images in this piece are directly from the Switch's screenshot feature.)

Virtual Console might be MIA on Switch thus far, possibly due to Nintendo wanting to roll out a Netflix-type catalogue alongside its paid online service in 2018. But Square Enix ain't got time for that, and has rolled out Seiken Densetsu Collection, a bundle of the first three games in the Mana series, for Switch in Japan. (Since Switch is region-free, you can play the cartridge in any system, or make a Japanese eShop account to buy it digitally. But it won't be in English.)

The Mana series has its origins in the action RPG genre, that glorious fusing of Zelda-style sword-slashing battles with Final Fantasy-esque character progression and storylines. Ever since the first entry on Game Boy, they have also been defined by exquisite soundtracks. You can play these games just to listen to the music, and sometimes when you're struggling through a wonky, difficult, or just plain broken section, you need those tunes to mellow you out. 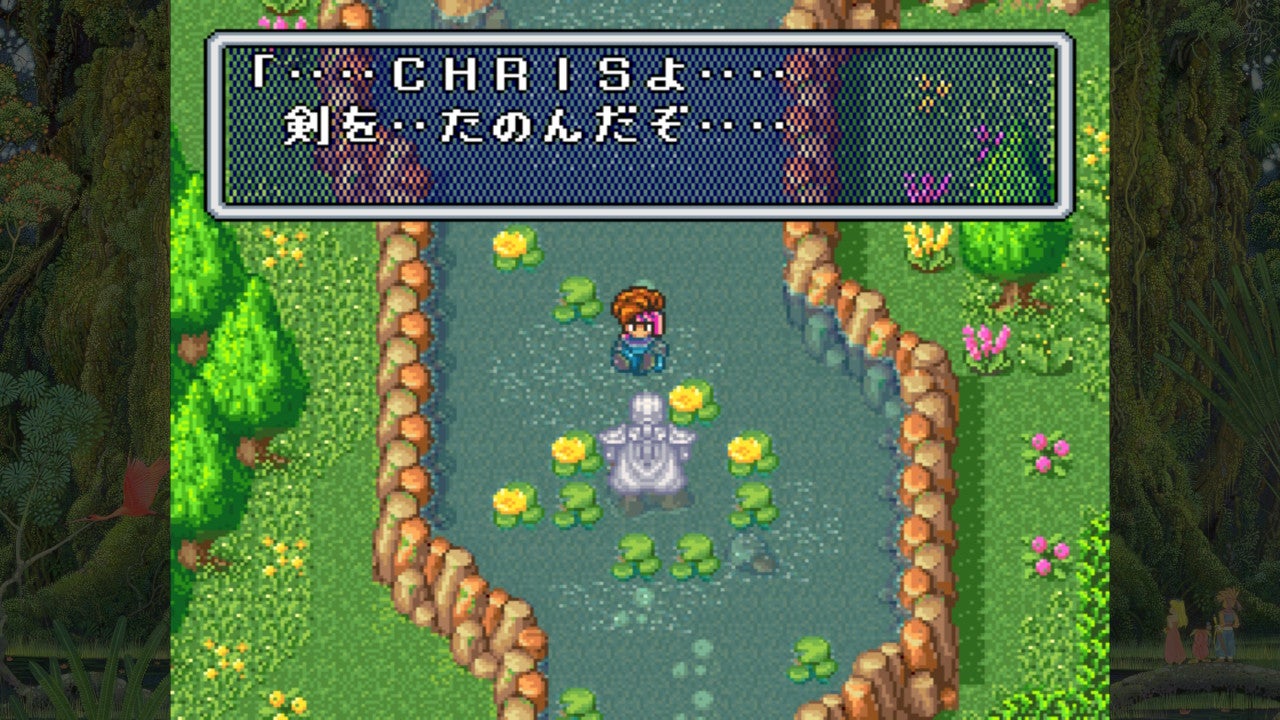 Seiken Densetsu 2, AKA Secret of Mana.

While the emulation has been handled by the masters of the craft, the Japanese studio M2, the compilation is almost entirely bereft of bonus content beyond the core games. Those are the first Seiken game on the Game Boy (released in the West as Final Fantasy Adventure) and its two sequels on the Super NES — the well-known Secret of Mana and its less-known sequel Seiken Densetsu 3. Not only was Seiken 3 never released outside Japan, this is the first time it's been re-released in any form anywhere since its debut in 1995.

The game select menu is simple: Either start one of the three games, or enter a basic "sound test" mode where you can play the audio tracks. Inside each game, you can press ZL to bring up a menu overlay, which is where you can save and load to three slots at any time (the original games only let you save at specific save points), look at the controller layout, or bring in new players. Secret of Mana supports three, but Seiken 3 is only two-player. (All controller configurations are supported, from a single Joy-Con to a Pro.)

You can also press ZR to cycle through screen sizes. The Super NES games have two size options, while the Game Boy game lets you choose between three different colour palettes (harsh black and white, muted sepia, and ugly-arse Game Boy green) as well. And those are all the bells and whistles. Don't expect to find an art gallery, or deleted scenes, or… or anything. 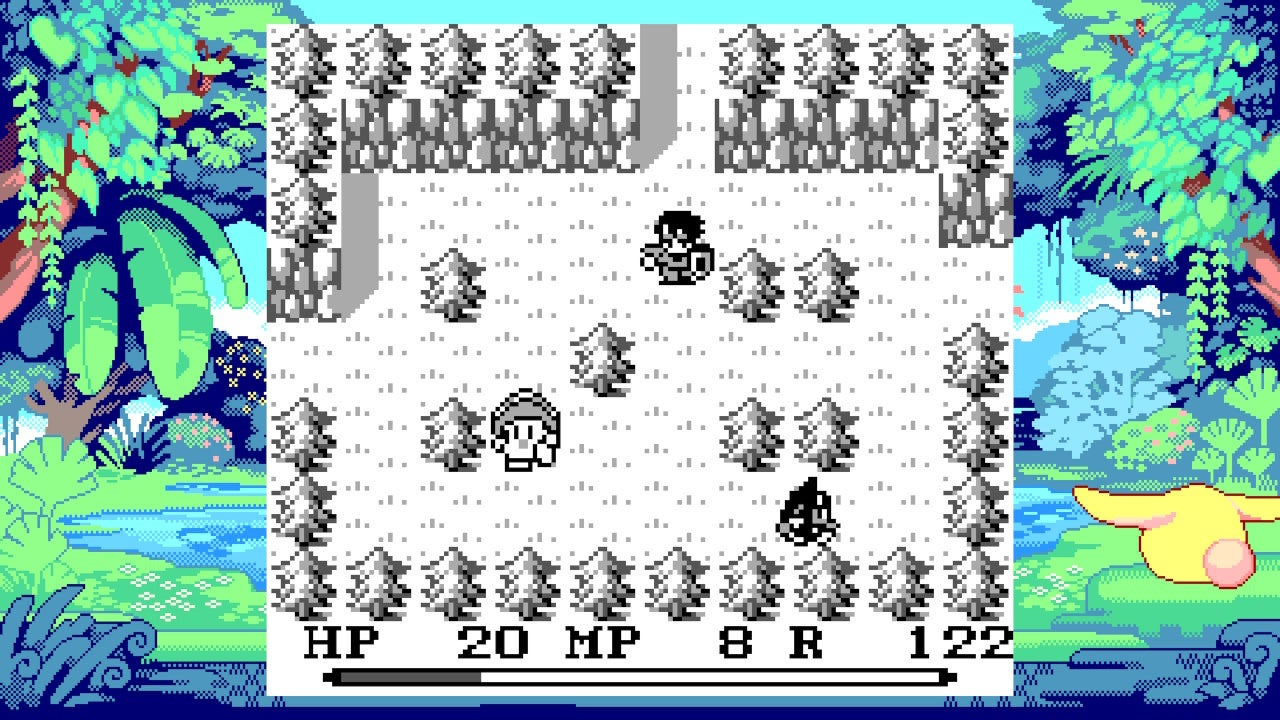 Good thing the games are so excellent! Final Fantasy Adventure is definitely rough around the edges today, but 25 years ago it was one of the biggest, most grandiose adventures to be found on Nintendo's black-and-white portable. Last year, I found myself playing it on the Game Boy again for no particular reason. Or you might have experienced the Vita remake, Adventures of Mana. It holds up better than it should, considering.

The most-loved game in this package is surely Secret of Mana, the 1993 Super NES game that took the winning formula and elevated it with gorgeous 16-bit graphics and an unforgettable musical score by Hiroki Kikuta. The fact that three players can each take control of one of the game's heroes and play it through cooperatively is its greatest strength, although it's perfectly serviceable solo as well. 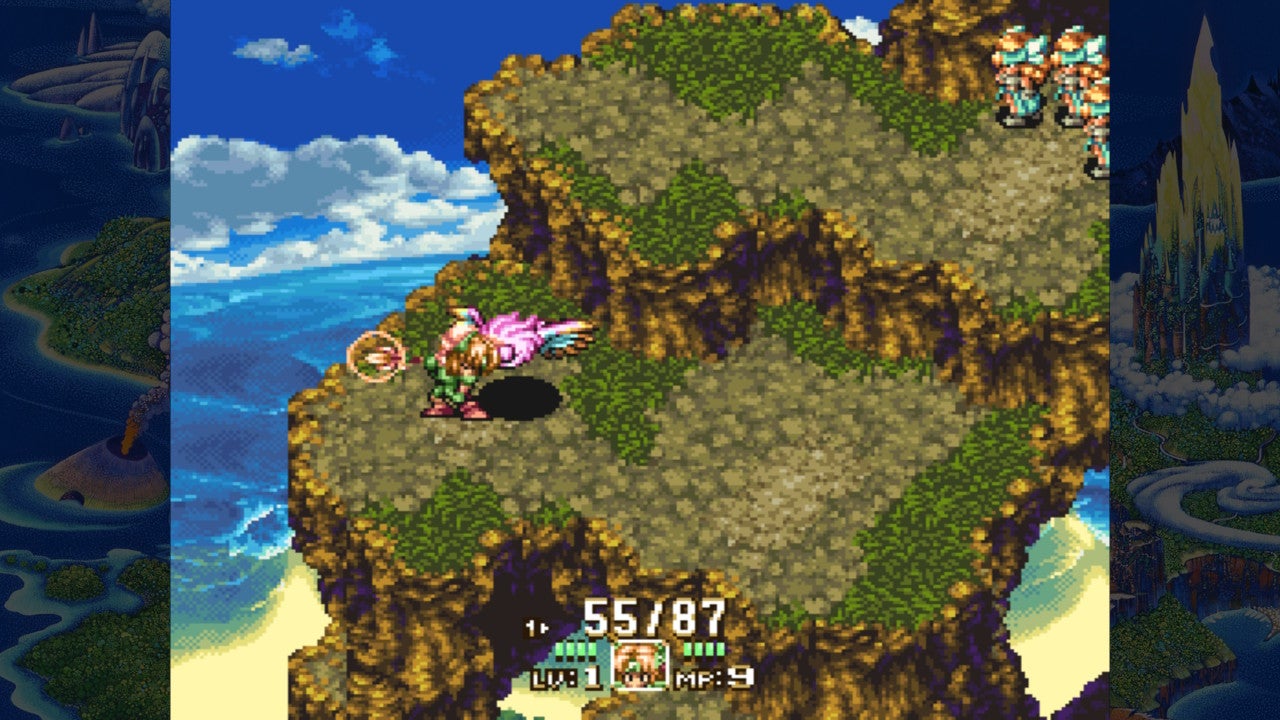 But I've played through Secret many times, and only played through its sequel once (when I imported the Super Famicom cartridge in 1997), so I've spent the most time so far exploring Seiken 3 again. In hindsight, this game is the missing link between Secret and the series' later games: It's still very much a Super NES game, with another Kikuta score in the same style, and retains many of its predecessor's gameplay elements. But this time, the character design more closely matches the distinctive elfin look of the later games' heroes. And there are weird mechanics like planting seeds in flower pots in Inns to grow random items, more foreshadowing of what the series had in store later.

Seiken 3 was an ambitious and complex game for 1995. You can choose one of six main characters, each of whom has their own opening sequence set in a different part of the game's world. You choose two others from the group to be your partners, and you'll meet them during the story, which means that many of the game's scenes will play out differently, with different lines and actions, depending on who you bring along.

Not only that, but all three characters undergo two mandatory, permanent class changes during the game, which will result in them being one of four different classes by the game's end. And while Secret of Mana only had a few different items and pieces of equipment, this game is filled with all sorts of doodads and gewgaws, and a complex menu system to manage them. 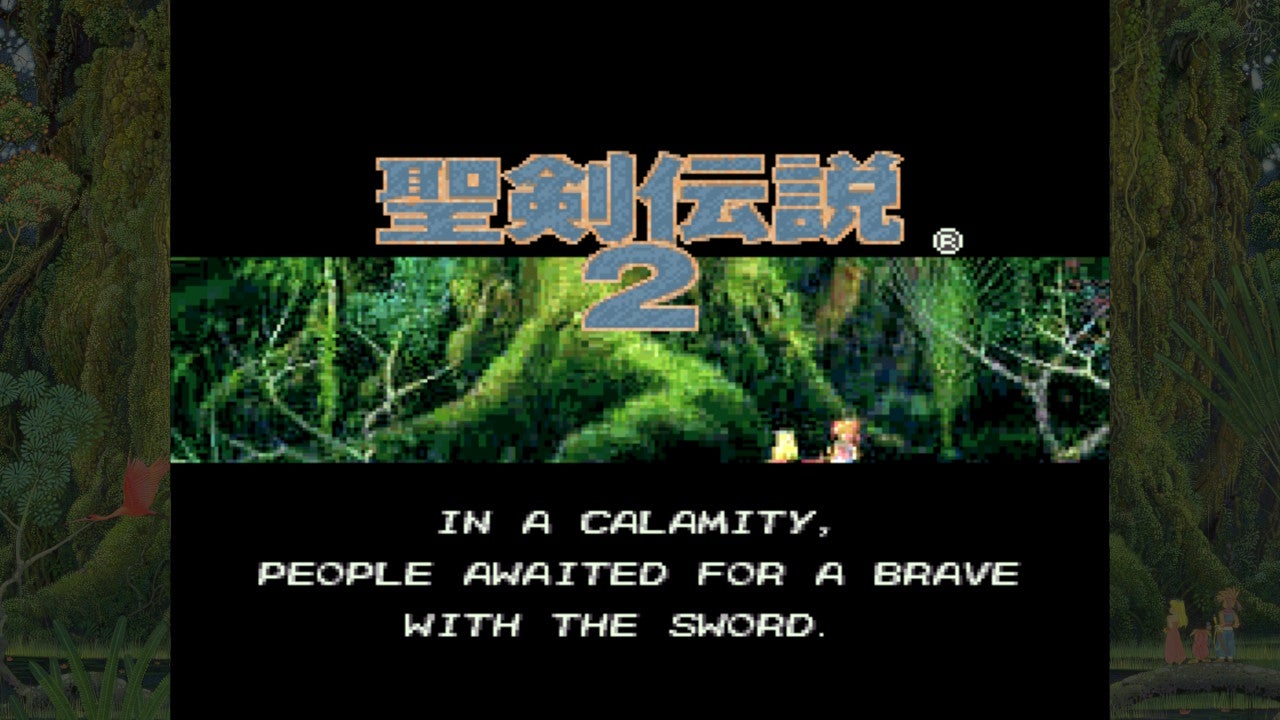 Seiken Densetsu 2. This is the only English you'll see in this collection, if you import it.

These games were designed in an era where it was assumed the player would read the manuals. Seiken 3's Super Famicom release included a 48-page manual that walked through the game's complex design in tiny typeface. None of these games explain themselves. I can understand not adding an art gallery or other bonus content, but this is a level of penny-pinching bullshit I never even thought possible. Have fun going to GameFAQs to try to find out what button swaps between characters when you're equipping armour. (It's the Minus button.) Thankfully, a digital manual has since been added.

Flawed as it is, Seiken Densetsu Collection is a great proof of concept for the hypothesis that Switch can be the ultimate retro gaming console. You can have your game any way you like it — blown up on the TV, in your lap on the tablet, on an aeroplane tray table — and it looks great in all circumstances. The Pro Controller makes for an excellent SNES pad, and even though the Joy-Cons don't have D-pads, using the four buttons on the left Joy-Con is a surprisingly decent substitute.

If you don't know Japanese, you can probably muddle through the first two games easily enough since they are fairly straightforward games and otherwise identical to their English releases. Seiken 3's complexity may stymie you, though, even with a FAQ in hand, since the game and strategy can change a lot depending on your choices.

Now that Square Enix has scraped together the five bucks it would cost to add a digital manual, I certainly hope that this collection comes to the West. The emulation is great, the Switch is a perfect platform, and the games are fantastic. Also, for us non-Japanese fans, it's a shame we're missing one of the best Mana games, and this would be a great chance to finally make up for that lapse. And with Nintendo taking its sweet-arse time releasing Virtual Console games, the field is wide open.