The Nintendo Switch Vs 40 Hours Of International Flight 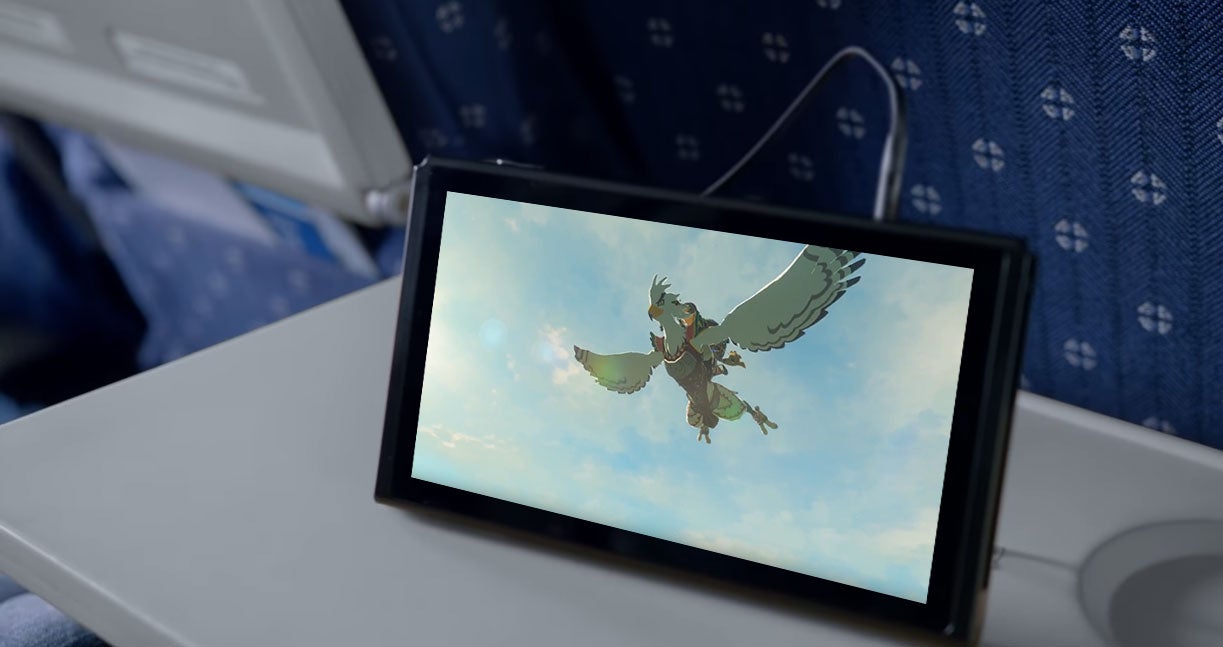 Last week, I had the pleasure of visiting the team in our New York office. The best part of that was the burgers and beers! The worst part was having to spend 40 hours on a plane going from Australia to the US and back.

Or so I thought.

Even a couple of years ago, the thought of spending that long on an aircraft would have filled me with a sense of impending dread. I'd have split my time jiggling an audio cable to maintain the busted audio in my armrest, trying and failing to sleep, and playing some janky-arse Civ on my ancient laptop, waiting seven minutes between turns.

This time things were different and I had a blast, all because I had a Nintendo Switch with me. And, to get around the device's battery limitations, I was flying both ways on a Qantas A-380, which had dedicated power outlets under each seat.

never been more excited for a 20 hour flight pic.twitter.com/N3hIAAKuSP

This is a situation where the Switch's USB 3.0 port came into its own. I have a Pixel XL phone — my phones are my other long haul mainstay, thanks to podcasts — which also has USB 3.0, which meant that instead of bringing a bunch of proprietary chargers and cables with me onto the plane, I only had to bring the one cord that I could share between devices (and which could rapidly charge both).

On the initial 14-hour flight from Sydney to LA, I had the Switch plugged in, and so could play as long as I liked. On the shorter five-hour flight from LAX to JFK, where I had moved to a 747 that didn't have power (the USB ports in the arm rests weren't powerful enough to juice the Switch), it still lasted around three hours thanks to a dimmed screen and reduced battery usage of aeroplane mode.

From a pure hardware perspective, the coming together of airline convenience and console technology, that's impressive. But what constantly struck me while playing the game on an aeroplane was that I wasn't just playing a portable video game. I've done that plenty of times, and even the best of them have concessions: They're relatively simple, or have downgraded visuals, or are re-releases of games you played on a console years ago, you know the deal.

But here I was playing one of the best console video games of 2017. It was here, in my hands, uncompromised and in all its glory. Every hour or two I'd just sit back and marvel at the wonder of it. I was sitting in a metal tube halfway across the Pacific playing Breath of the Wild and it was as perfect and gorgeous as it was on my 55-inch TV at home.

This would have been fun for a couple of hours if, like previous Nintendo handhelds, it had shipped with a weird custom power cord that I'd never have packed in my cabin bag over my more practical phone and laptop chargers. Packing something as convenient and universal as USB 3.0, though, is what I think really made the difference here. I think I played Zelda for around six to seven hours on both of the longer 14-hour legs of my trip, and two to three hours on the shorter cross-country flights, which for a game of that scale meant I wasn't just dicking around for a bit before my battery died, but could really sink my teeth in and get a lot of stuff done. 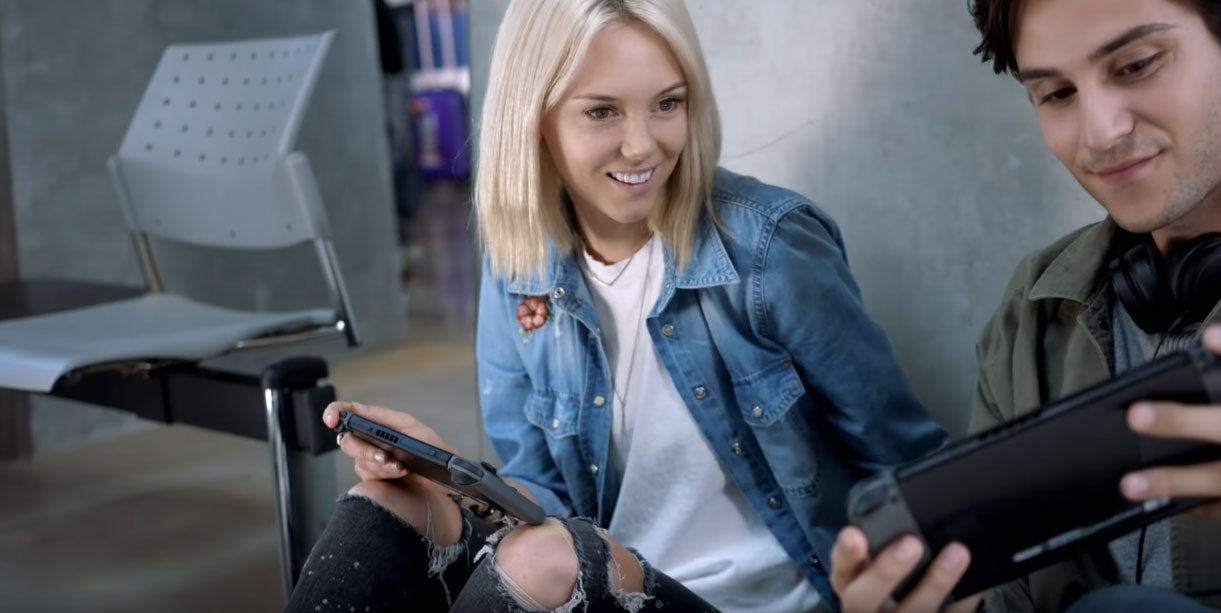 I too played my Switch sitting against a wall at an American airport. Only I was alone and exhausted, not sharing the moment with a cute stranger.

I've had a Switch since launch, but have mostly spent that time playing on my couch, because when you work from home and don't have a daily commute, that's the only place you tend to play games. So I'd never tested or appreciated the portable benefits of the console.

Going from one extreme to the other, and with my last handheld experiences being the technically weak (relative to everything else in this conversation, at least) Nintendo 3DS and the poor little PlayStation Vita, I just wasn't prepared for the leap.

It's changed my entire way of looking at the Switch. I'd previously seen its portability as a nice little bonus, something I'd use occasionally if I ever caught the train or was spending the weekend away. Now I wonder how long the 3DS has left, because it was no harder putting my Switch in a case (well, a sock) and throwing it in a bag than it was a 3DS. Only here I was playing full, proper console games.

It's also changed the way I approach long trips! Like I said up top, I usually hate travel, because in my mind I'm always obsessing over the amount of time left until my destination, which usually leaves me feeling somewhere between restless and downright irritable. With a long, proper game to sink my teeth into here, that was suddenly no longer a concern. I was 100 per cent devoted to exploring Hyrule, and where previously I'd have watched minutes tick by in agony, entire hours melted away as I explored shrines and overcame Guardians. 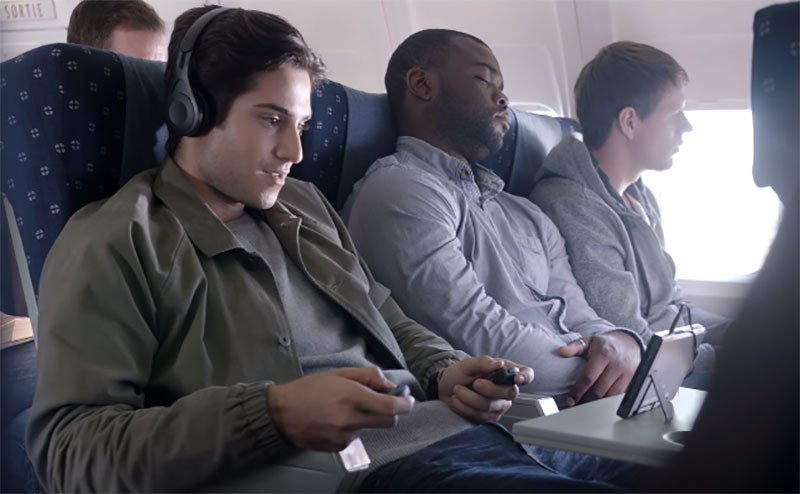 Turns out you can't actually do this.

About the only thing I didn't like about playing on a plane was that the Switch's first trailer had lied to us. It showed a man playing Skyrim on a flight with the Switch's main unit resting on his tray table while he played with detached Joy-Cons. After a couple of hours of playing Zelda with the whole Switch in my hands I wanted to try that out so I could rest my arms, but found that while the console was in aeroplane mode it was unable to communicate with detached Joy-Con, and so my only option was to play with the controllers on. Hardly a deal-breaker, I know, but still a weird thing to come across considering how important that feature had been in the initial trailer.

UPDATE: I am told you can play like this if you dig down into the settings once aeroplane mode is enabled! Carry on, Nintendo and your advertising partners.

And that was me, playing Zelda the whole time, alone. Imagine if I'd sat next to someone with a copy of Mario Kart...