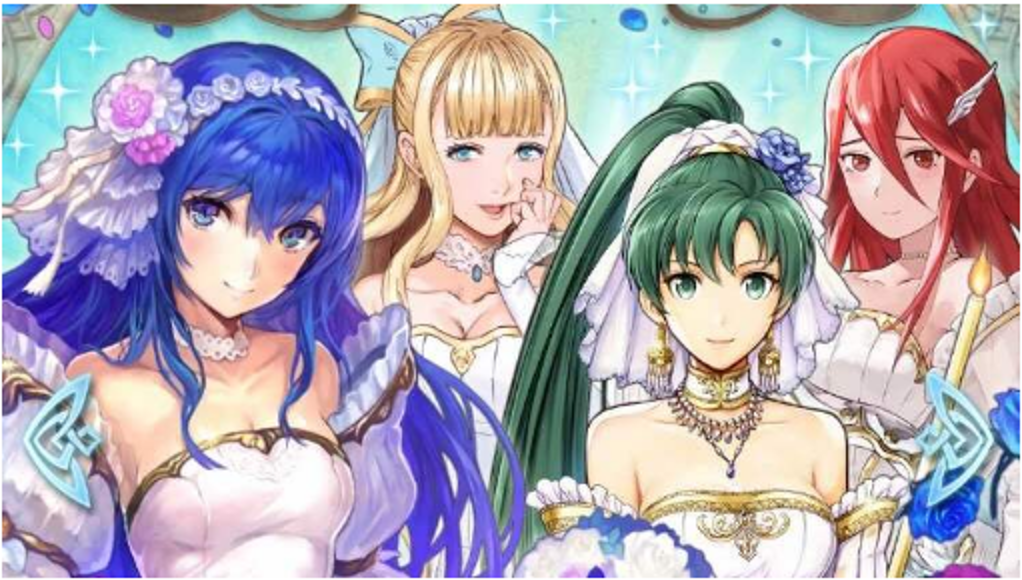 While Fire Emblem has had "Brides" for years now, their recent inclusion in a seasonal Heroes event makes the label "waifu simulator" feel less like a joke and more of a staple of the series' identity.

I've learned to love the sillier side of Fire Emblem Heroes and the franchise as a whole. A funny Spring event tossed popular characters into bunny costumes, placing the ladies into Playboy Bunny-esque costumes and arming the men with weaponised carrots. Before that, Fire Emblem Awakening introduced the mighty "Bride" class, which, despite the name, was just as powerful as other deadly classes. Awakening's DLC also introduced a beach excursion with swimsuit clad heroes and heroines. Modern Fire Emblem games have not been shy about silly fanservice. Heroes' Bride inclusion feels like a natural extension of a quirky sensibility that's been growing in the franchise for some time now.

But by combining blushing, gowned women with gacha mechanics, which encourage players to collect and claim all the special characters, Heroes strays into uncomfortable territory. Fire Emblem Heroes is a lighthearted game about building an army of powerful characters from all across the franchise, men included, but this particular event only offers four beautiful women as prized possessions.

One the one hand, I love the display of unabashed romance and femininity on display, but on the other, I find myself repelled by game mechanics that turn women into literal collectables and trophies. Flattening characters that are fleshed out in the main series has always been at the core of Fire Emblem Heroes for men and women alike, but adding the context of matrimonial imagery positions the Brides as collectable conquests. If heroes are already objects of desire, the connotation here feels even more possessive. It is only the women who are dressed up this time, paraded as prizes, subservient mistresses who whisper breathy platitudes about love softly into your ears with the tap of your screen. Of course, this is just a game and a bit of silly fun, a fact that I remind myself of constantly. I'm not distressed or upset nor would I encourage other people to be incensed. If you want blushing bride heroes, go for it. I summoned earlier this week and had a lot of fun. Check it out:

"Why not, Fire Emblem Heroes," I thought. "I'm the target audience for your brand of absurdity." pic.twitter.com/50OlQUKQI9

When I see brides in one of my favourite game franchises, my heart does a leap. I want to be that. I want to be a hero, I want to kick arse, I want to be beautiful, and I want to have my own special day in the sun. Fire Emblem has dazzled me with a wide array of characters, and this is just another manifestation of a larger thesis: Heroes exist in all forms, even if they're in bride dresses or bunny costumes.

Having awakened into my own femininity far later in life than I should have, I've always found myself struggling with gender presentation. Too little effort and I'm subject to slurs; people on the street have openly called me a freak on days when I've dressed too casually, but if I lean too much into feminine attire, I am told that I am trying too hard. All the while, I walk down New York streets full of beautiful people who get to confidently wear dresses and look like powerful and professional career women.

Fire Emblem typically gives me a way to escape that reality. When Brides are thrown into the mix, I'm caught in the paradox of empowerment and objectification. Some of these new units offer useful skills that offset the silliness; Lyn has a skill that prevents counter attacks and Charlotte has a powerful speed boost in combat if her health is at a certain threshold. On the battlefield, these brides can kick some serious butt. Off the battlefield? It's a bit more fraught.

I'm going to keep playing the game and summoning heroes, but also probably only get one bride. Enough to enjoy a pretty dress without starting a bizarre bride collection.