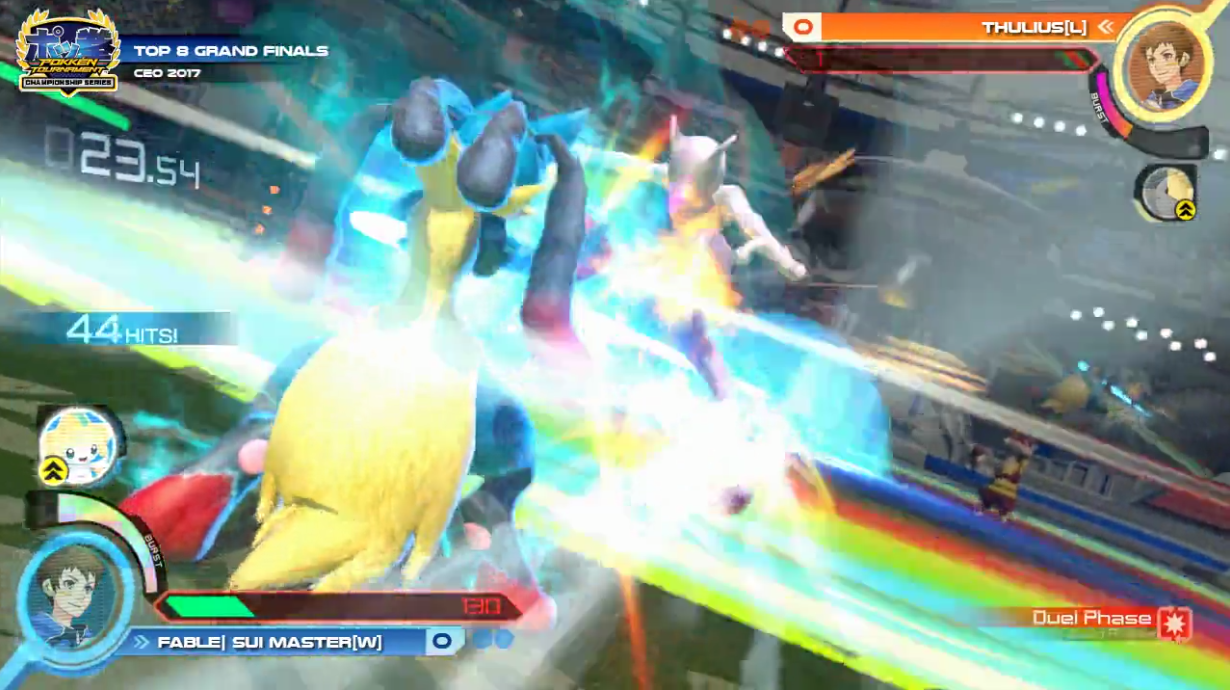 Christian "Suicune Master" Patierno earned his second straight championship belt for Pokken Tournament at this past weekend's Community Effort Orlando. You might not have known that, even if you watched the stream, because the commentators and the on-screen overlay referred to him by a slightly different name.

At CEO, he wasn't "Suicune Master". He was "Sui Master", the latest in a long line of unexplained adjustments on official Pokemon broadcasts.

Since launching in arcades in July 2015 and carrying on into March 2016 when it arrived on Wii U, Pokken Tournament has had a passionate competitive community surrounding its unique mixture of 2D and 3D gameplay. The Pokemon Company capitalised on this with last year's Pokken Tournament Championship Series, a circuit of both official and grassroots events that fed directly into the World Championships they held for their video and trading card games in August 2016.

With their backing, Pokken players threw themselves headlong into competition, happy to be recognised by their parent company.

With official support comes restrictions, and something was apparently wrong with Suicune Master's chosen name. It wasn't changed in May 2016 during the Pokken Tournament Championship Series kick-off event at DreamHack Austin, but it was truncated for last year's CEO broadcast.

Suicune Master told Compete the change was made because his nickname used an official Pokemon name. That was the justification he was given by Pokemon employees present at the event."I was first made aware of this policy right before I had to play my match on stream at CEO 2016," he said. "They told me I had to change my tag, suggesting Sui Master or my real name, so I just picked Sui Master."

Although he's since picked up Lucario in competition, Suicune Master started out as a masterful wielder of Suicune, the water-based legendary dog from Pokemon Gold and Silver who is capable of controlling the battlefield with a wide variety of projectiles and sweeping attacks.

As Pokken Tournament numbers grew, he quickly emerged as one of the best players in the United States, placing high in just about every event he entered. The new Sui Master tag was confusing, if not wholly unintelligible, but it stood out as weird that such a policy was even in place, especially with how sporadically it was enforced.

In May 2016, an official Pokken Tournament Championship Series event at DreamHack Summer saw a German player named Lion "Schiggy" Meier place third. Schiggy, the German name for Squirtle, wasn't changed. Additionally, Jacob "ThankSwalot" Waller, whose handle is a pun on the poisonous Swalot, wasn't affected at the Pokemon US National Championships in July 2016, but Suicune Master still saw his name whittled down. Furthermore, the rule wasn't enacted at the Evolution Championships Series that year, only to again rear its head at the World Championships.

Thanks to the announcement of a 2017 Pokken Tournament Championship Series and the impending arrival of a long-awaited Switch port, the community arrived in Orlando last weekend with an increased enthusiasm, hoping to perform well enough to earn a spot at Worlds later this year. Suicune Master and ThankSwalot were among the 121 entrants, and both made it to the finals.

Along the way, it became clear that Pokemon's name policy was exactly the same as it had been in 2016. As usual, Suicune Master became Sui Master, but this time around, ThankSwalot wasn't spared, becoming Thanks A Lot and ruining a great name in the process.

The oddity here comes from the fact these players are using official Pokemon names. It's not like they're waltzing into events promoting Digimon, Monster Rancher, or, god forbid, Robopon at Pokken Tournament Championship Series events. And due to The Pokemon Company's silence on the matter, no one is sure why this is even an issue.

"I actually just found out about this policy this weekend at CEO," ThankSwalot explained. "I asked [a Pokemon employee] if my name having a Pokemon in it is why it was censored, and they said that was correct."

The community has taken these changes in stride, and ThankSwalot even jokingly updated his Twitter name to reflect the policy.

"Honestly, I'm OK with it," he said. "It became sort of a running joke during CEO, so I just find it funny."

"When I found out I had to change my tag this year, in my mind, I was like, 'Oh my gosh this is a repeat of last year if I go Sui Master and win again.'" he added. "The whole name changing deal was just funny to me. I didn't mind it."

In the world of competitive gaming, most people know players by their chosen handles rather than their real names. Where some fighting game personalities have been able to move past these tags and transition to their full names (e.g. Justin "Marvellous" Wong, Alex "Calipower" Valle, Arturo "Sabin" Sanchez, etc.), crafting a sort of second identity has become a vital part of growing one's personal brand in this new age of worldwide broadcasting.

While Pokken Tournament might not be the most lucrative title on the market, players may have to start thinking about that as they compete for the Championship Series' $US25,000 ($33,029) prize pool.

ThankSwalot is dedicated to remaining who he is, saying, "I'm not changing my tag anytime soon."

Ian Walker is a fighting game expert and freelance writer. You can find him on Twitter at @iantothemax.