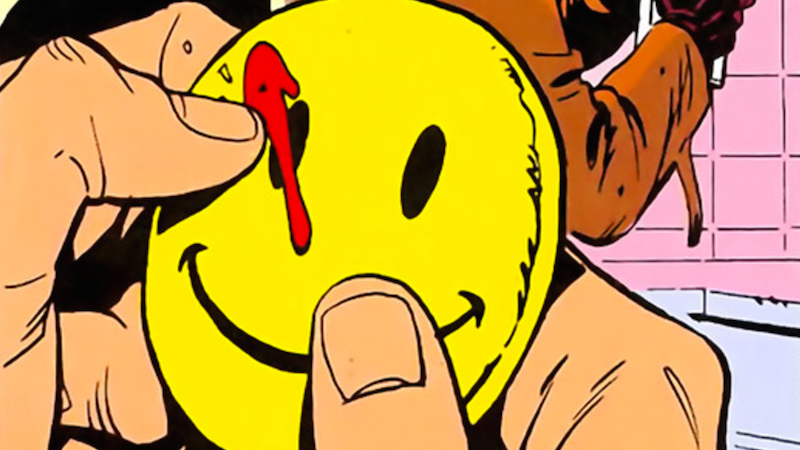 Doctor Manhattan's naked blue body aside, there are few images that scream Watchmen louder than the Comedian's bloody smiley face button. According to Watchmen artist Dave Gibbons, though, the button was a fluke that almost didn't happen.

In a new interview with Entertainment Weekly, Gibbons explains that the idea for the Comedian's button came to him after he'd finished an early design for the character that incorporated lots of camouflage to reflect his para-military background. The muted camouflage, Gibbons realised, made the Comedian fade into the background too easily, so he decided instead to dress him all in black with a pair of loud shoulder pads styled after the American flag.

This new look was definitely more striking than the first, but Gibbons also felt like it made the Comedian wee bit too dour looking. So he gave the murderous antihero a bit of flair as a joke.

"So on the sketch that I did, I drew a tiny little yellow smiley faced badge, almost as a throwaway, because I thought that's a really interesting contrast," Gibbons said. "This big hulking dark character, with this little splash of bright, silly colour."

When Gibbons showed his idea of the Comedian to Watchmen writer Alan Moore, Moore liked the idea so much that he decided to feature the button prominently in the series' opening sequence. The rest, as they say, is history.