This weekend's big Evolution Championship Series of tournaments for huge fighting games such as Street Fighter 5 and Super Smash Bros. Melee will run alongside an unofficial spin-off called AnimEvo. AnimEvo showcases competition in more obscure fighting games, and even some games that don't involve punches and kicks.

At Evo 2017, AnimEvo will feature tournaments for 16 games that weren't able to get into the official lineup for various reasons. The line-up includes fighting games such as Under Night In-Birth Exe:Late and Koihime Enbu, along with the block-climbing contest Catherine and the block-falling competition Puyo Puyo Tetris.

But according to those in the know, AnimEvo isn't a thing like Evo is a thing. "AnimEvo itself is basically nothing more than a name," co-founder and Gundam Versus organiser Brett Young told us. "It's intentionally designed with a decentralisation of power, in which we simply work as a group of individuals. AnimEvo itself represents the group of individual tournament organisers that run each game." He sees "a sense of camaraderie between niche game communities" that helps make this showcase possible.

Many of the organisers involved with AnimEvo have been running side tournaments at Evo since 2009. In 2014 a number of these figures began to refer to these side tournaments by a unifying name. The next year, an AnimEvo account was created on Twitter, and the real organisation began.

"Anime" may be a clear-cut term when used to refer to the general world of Japanese animation, but in the fighting game community, its meaning is more nebulous. While pretty much every major fighting game franchise has been influenced by the medium, only a select few are considered "anime" enough to fall under the umbrella. Some have pushed for the more ubiquitous "airdasher" to be used as a reference point, calling attention to the sub-genre's proclivity towards airborne combat. That isn't perfect due to the presence of the airdash mechanic in non-anime games such as Marvel vs. Capcom. Deciding if a game is "anime" or not often comes down to personal opinion, but it's generally accepted that franchises such as Guilty Gear, BlazBlue and Melty Blood make up the core of the sub-genre.

The "fighting game community" is really just a collection of various sub-communities, sharing space due to the commonalities of the games they love. The average Street Fighter fan won't always share the same fondness for Guilty Gear, and vice versa. As such, some games typically get the short end of the stick at tournaments due to the relative size of their player bases. It typically falls to the anime games to make concessions for larger titles. At a given weekend event, the matches for an anime fighting game might not get the big stage that is reserved for a Street Fighter contest. The finals of an anime fighting game might be mid-day; the finals of a big Capcom fighting game will go in prime evening streaming hours. That has engendered some bitterness between fans of the smaller and bigger games, leading to the formation of separate leagues that focus entirely on their specific interests.

"While the relationship between anime players and the rest of the fighting game community has been one of animosity at times, AnimEvo was formed for largely pragmatic reasons," said Cory "Coren" Mills, who is responsible for Aquapazza and Arcana Heart competition at AnimEvo 2017.

The main Evo event, Coren conceded, is enough of a "logistical nightmare" for its organisers. There's only so much they can do for the fighting game community, especially now that they are filling huge event spaces like this year's venue at the Mandalay Bay casino. AnimEvo gives fans of niche titles their opportunity to come together and compete with like-minded players. While some are simply less popular than the main Evo lineup, others such as Guilty Gear XX Accent Core Plus R have been replaced by newer iterations, which makes AnimEvo particularly important for supporters of the previous releases.

"Believe it or not, there is a very dedicated group of players who have continued to advance themselves in Guilty Gear XX Accent Core Plus R, well after Guilty Gear Xrd's release," organiser Shinobi explained. "This includes Japan, Mexico, and many other countries whose [top players'] only trip to America is for Evo. It is a very important trip to them. If they are able to play anything we run, it makes Evo even more worth the trip. Plus R was the final update to an era where Guilty Gear was one of the last strongholds of 2D sprite animation in fighting games. People appreciate and have enjoyed the journey they have taken with the game long before Xrd, so it's only appropriate to allow those players to participate in competition for it. Not to mention the players who have yet to have their favourite characters transfer over to the new series. I like to think of Plus R tournaments as part of a celebration of progress for the series, genre, and community. And honestly, it's never lost the hype."

While AnimEvo isn't as strict a governing body as the main Evo organisation, they provide the separate tournament heads under their umbrella the opportunity to get more eyes on their favourite games, both on-site and through multiple broadcasts streamed for viewers at home.

"I started doing this streaming bit for my channel because I wanted [to] show off Melty Blood and other weird games," AnimEvo broadcaster "Numakie" told me. "This is really just an extension of that, with others sharing a similar ideal. I just want to show that there are fighting games beyond the main lineup that people like to play. It all comes down to loving these games and stepping up. Each game listed in AnimEvo has an organiser who wants to run it and streamers who wish to assist in sharing it. We just do what we can." 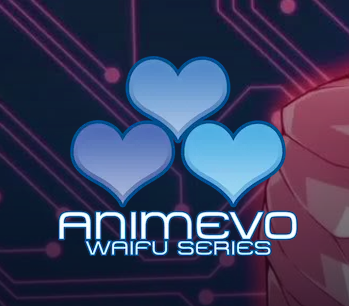 AnimEvo perfectly highlights that Evo is more than just competition. It's a celebration of the genre, including people from all walks of life. No matter what game a player counts as a favourite, there will likely be some sort of event on the show floor that's able to cater to their specific interests. As the community grows larger and more competitive titles are released, it falls to the passionate members of the community to fill the gaps major events have to pass over.

"For many anime players outside of large fighting game community hubs like California, Seattle, and New York City, Evo may be the one time out of the entire year where they can afford to travel out and play their game," co-founder Daryl "DJcream" Bunao said. "There are so many people in the collective scene nowadays. Trying to convince everyone that Gundam or Arcana Heart is a worthy game to try out at Evo just became more of a numbers game over the years. Forming AnimEvo helped bring a louder singular voice to what would have been multiple small whispers in a gigantic convention hall."

AnimEvo is scheduled for July 14-15. More details can be found through the official website.