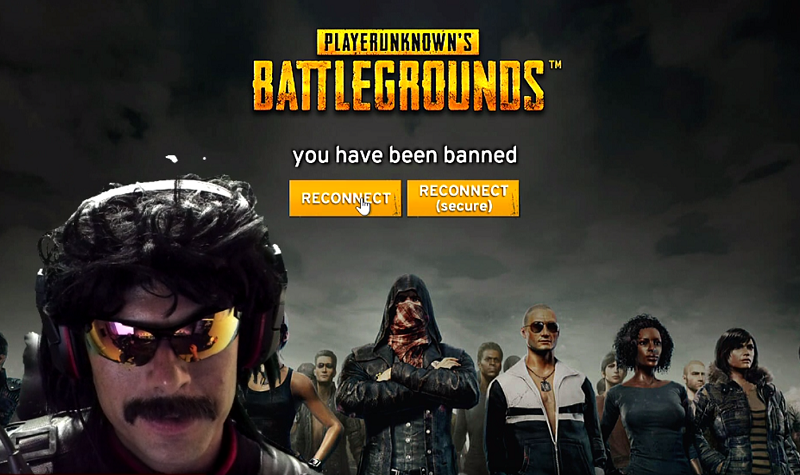 Twitch darling Dr Disrespect, perhaps Battlegrounds' most recognisable streaming personality, got suspended from the game yesterday after pulling the trigger on a squadmate, VICE Waypoint reports. And when Dr Disrespect threatened to roundhouse kick developer PlayerUnknown in the neck, PlayerUnknown spoke out about the unnecessary use of violence in his game and in real life.

Dr Disrespect is OG Twitch. On stream, he's an over-the-top sinister arsehole. His mullet, wraparound sunglasses and moustache drive home the thing. It's a comic performance and, every day, around 10 thousand viewers tune in for it. After making a name for himself as an H1Z1 streamer last year, a few months ago, Dr Disrespect moved on to Battlegrounds, a game whose culture glommed onto his villainous act and impressive reflexes.

Yesterday, Dr Disrespect pulled a very in-character, arsehole move: After finding a vehicle that only seated three, Dr Disrespect nonchalantly shot his fourth squadmate. "We're gonna go find a car, OK?" Dr Disrespect said before showering him with bullets. After the first few bullets and a pause, he shot his squadmade in the head a few more times for good measure.

It was a gag, sure, but Dr Disrespect violated Battlegrounds' mandate against "team kills" — a bannable offence. Battlegrounds' rules read, "Do not team kill: There is no excuse for non-accidental team kills. If your teammate is breaking these rules, report them to us instead." On Stream, Dr Disrespect complained: "I can't just get off in the middle of a streak!"

It's a bit unusual for developers to comment on specific bans, but PlayerUnknown had some strong opinions on what one of his game's biggest personalities did on stream. Here's a tense exchange that went down on Twitter after the banning incident:

Suggesting violence is the best way to solve a disagreement is just wrong, even if you are playing a character... https://t.co/ziQtkyyg8E

And in a longer message, PlayerUnknown explained that "even the threat of violence is not something that should be joked about... All I ask from anyone that reads this is to consider that your words, however flippant they may be, could have unintended effects on those reading them." He then divulged a story:

When I was in college, many years ago, I had a disagreement with my flat mate. Instead of talking it out like men, he decided to get aggressive and while I was backing away from him, he kicked me in the chest and put my head through a plate glass door. Thankfully, I don't suffer from any ill effects due to this experience.

The point of that story is to attempt to explain why I think even the threat of violence is not something that should be joked about. Given my experience in college, and the fact that The Doc's threat, even as a joke, synced up closely to a bad experience I endured, it could have brought up bad memories, triggered a panic attack or had other consequences The Doc might not have intended when composing the tweet.