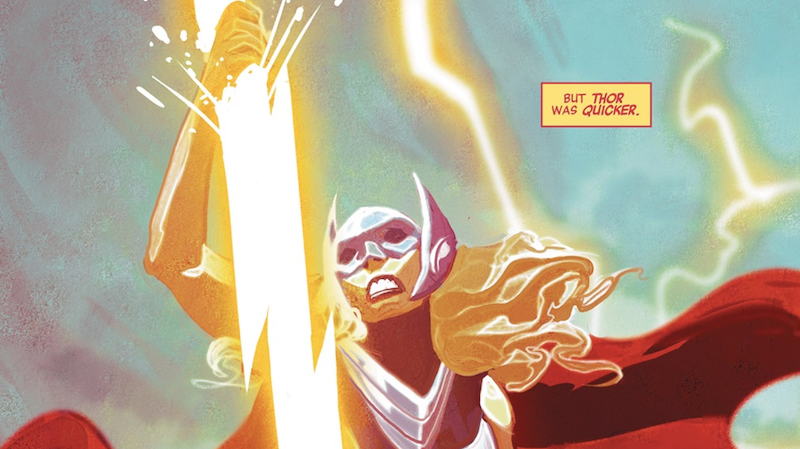 Jane Foster became the Thor when the original Thor's (Odinson) magical hammer Mjolnir deemed him unworthy and chose Jane as its new wielder. While Odinson's been slogging his way through a beer-fuelled existential crisis, Thor's spent her time living up to her new role as Asgard's goddess of thunder.

While Thor still possesses all the powers Mjolnir affords, the thing that's made her worthy has been her ability to understand when and when not to use the hammer. Thor's set herself apart from Odinson by favouring wit and strategy over blindly rushing into battle and hitting things the way her predecessor was known for.

When you zoom out a bit, the Unworthy Odinson vs. Worthy Thor binary has been an interesting exploration of how both heroes' identities are linked to the hammer's perceptions of them.

At least, it was right up until the moment that Steve Rogers, supreme leader of Hydra, was somehow able to pick Mjolnir up like it was nothing.

Even though we're deep into the thick of Secret Empire, there's yet to be a proper explanation of how Steve was able to take Mjolnir and what drove Odinson to join Hydra's ranks. This week's tie-in issue of Avengers, titled Where Is Thor?, leaves those questions unanswered, but it does prove a very important fact about Jane Foster: She doesn't need Mjolnir to be a good Thor.

Where Is Thor? opens with Thor stranded on an unknown planet, or perhaps in another dimension after being banished there by Steve at the beginning of Secret Empire. Thor awakes disoriented and stuck in a pit of viscous ooze being farmed by a group of local beings. One of them, Hecla, pulls Thor from the ooze and listens to her wild story about being a god from another world spirited away in the heat of battle. 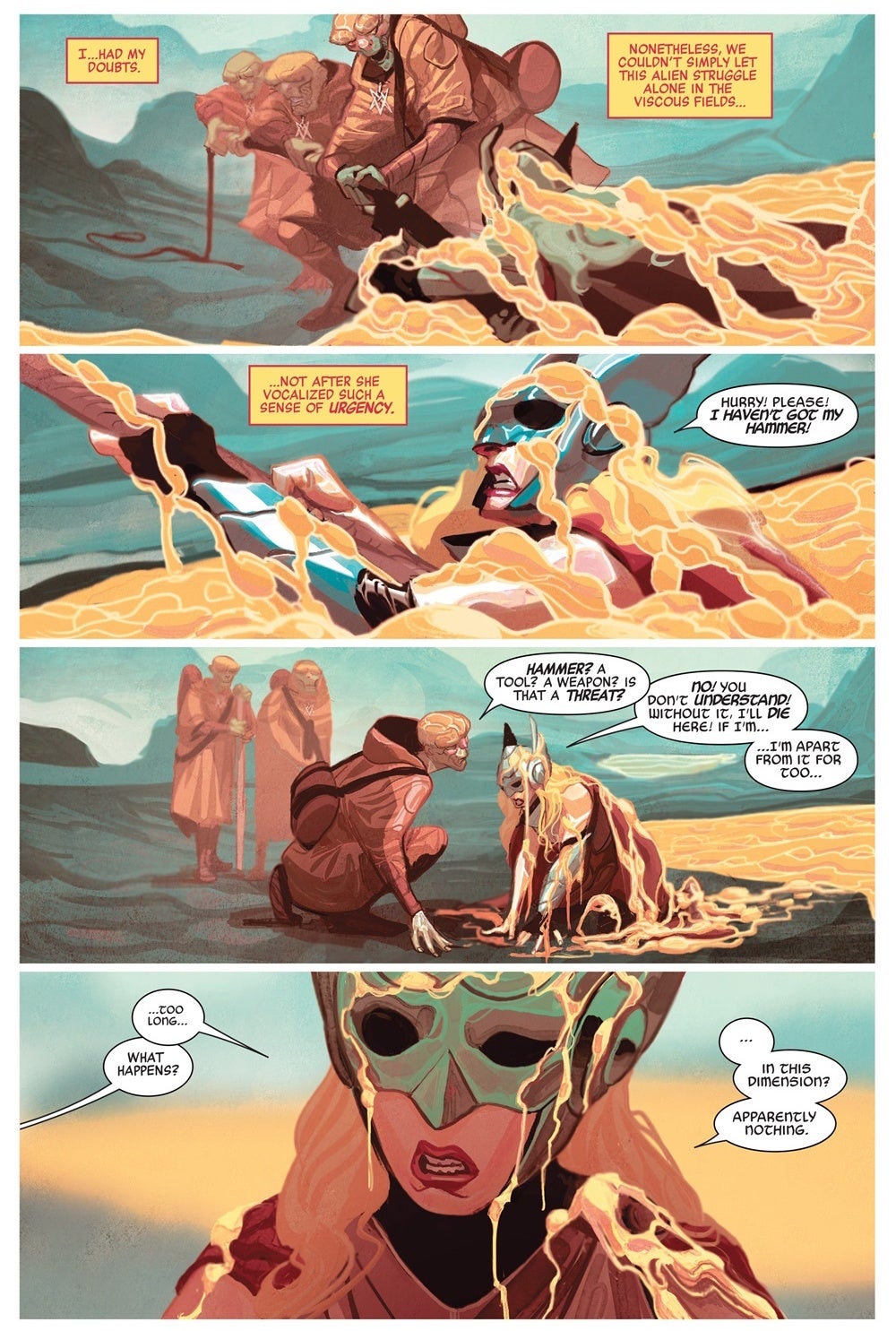 Thor panics when realises that she's lost Mjolnir and is on the verge of reverting back to her cancer-stricken human form, but she soon learns that on Hecla's planet, she's seemingly stuck in goddess form. Though Hecla has his reservations about whether what Thor's saying is true, he humours her, takes her in, and helps her try to make sense of the strange new land.

For the most part, Where Is Thor? is a slice-of-life story where Thor learns about Hecla, his people and his planet. People didn't always farm, Hecla explains, they used to smelt ore and harvest trees before Yod, a demon that breathes lightning, claimed itself to be their new leader and brought ruin to the planet. The more time Hecla spends with Thor, listening to her tell stories about the Avengers and seeing her adventurous spirit, he gradually begins to consider that she may actually be a god.

Though he can't be sure, Hecla suspects that a local legend about a portal that could transport Thor home could be true and offers to join her on a quest to find it. 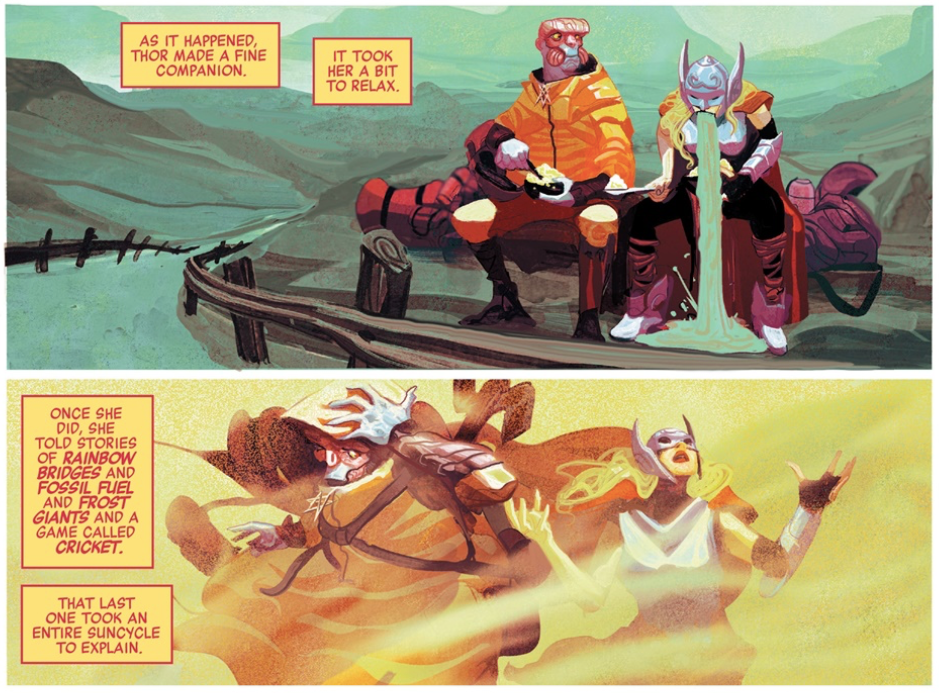 Hecla is a bad cook. (Marvel)

Where Is Thor? goes out of its way to highlight the ways in which becoming an Asgardian god has changed Jane and how much of her human self still exists beneath Thor's armour.

While she can't stomach Hecla's strange cooking, she knows in her heart of hearts that Volstagg would do it and anything Volstagg can do, she can do a thousand times better. But she also takes the time to tend to Hecla's wounds as they make their journey towards the portal, demonstrating that her medical training as a doctor on Earth has stuck with her.

When Hecla and Thor near the mythic portal that might send her home, they're intercepted by Yod, who promptly attacks the two with the intention of killing them. Though she's only armed with a wooden hammer (a gift from Hecla), Thor charges Yod head on and literally grabs the lightning streaming from its mouth as if it were a physical object and nearly beats the monster to death with it. 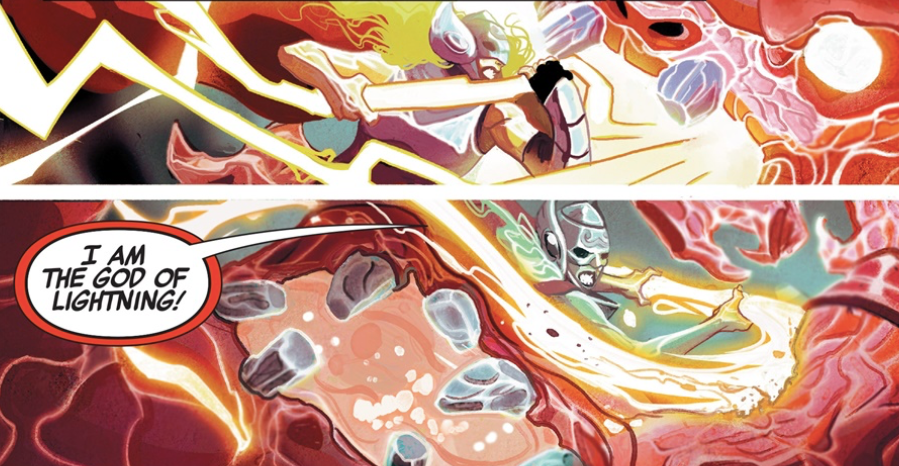 As Hecla looks on, Thor convinces him of her story with her feats of strength alone, and Thor realises in the heat of battle that magic hammer or not, the thing that makes her most worthy, ultimately, is her compassion for others.

Where Is Thor? closes having posed more questions than offering answers, but it's an issue worth remembering as we look to the horizon at Marvel's Generations anthology. Generations will pair classic heroes with their contemporary counterparts and potentially re-establish the originals as the main versions of the character in Marvel's books — meaning that new characters such as Jane could be sidelined.

Regardless of what happens to Jane Foster in the future, she'll always have the legacy of having been a damn great Thor, because she proved that even on her worst day without her hammer, she still gets the job done.