What We Mostly Loved About Spider-Man: Homecoming

Spider-Man, Spider-Man, does whatever a spider can. Apparently spiders can reboot their movie franchises twice in 15 years. The web-head made his feature debut in the Marvel cinematic universe, and it wasn’t horrible at all. Join Patricia Hernandez and me as we discuss Spider-Man: Homecoming.

Fahey: First off, let’s establish a baseline. I have seen all five of the previous Spider-Man films, so I’ve run the whole gamut of radioactive super-hero related emotions. Elation, worry, depression, sadness, and now something that might be elation again but it’s hard to tell as it’s been so long. How about you, Patricia?

Patricia: I watched the Tobey Maguire movies but somehow missed all of the Andrew Garfield ones, so it’s been a while. I’ve been reading a bit of the Miles Morales comic books in that gap, though!

Truthfully the biggest thing I remember is the infamous emo scene of the Tobey Spider-Man movies. Scarred into my brain.

Fahey: God, did you just… are you talking about the dance number from the third Maquire film?

Fahey: No no no. We do not speak of that. Unwritten rule. Now written. Shush. Garfield’s first film went a ways towards erasing that tragedy from fan memory. It was a fresh start with a charming romance. Unfortunately they fumbled it in the sequel, which may as well have been a fourth Maguire film. But that’s all in the past now. We have a new Spider-Man, a new movie and… renewed hope?

Patricia: Spider-Man is kinda one of those perennial heroes that everyone KNOWS (spider bite! Mary Jane! Aunt May! and so on), so I kinda went into this movie with low expectations — how could they possibly make a movie that’s been rebooted so many times good? Aren’t we sick of this origin story? But… they pulled it off! So yeah, I’d say renewed hope.

Fahey: You hit one of the major points right there. Yes, we are sick of his origin story. So they didn’t even bother.

Patricia: We never even saw Peter’s spider bite. Which makes sense, because he’s already Spider-Man at this point, but still.

The movie starts off with this really endearing sequence of Peter vlogging his adventure in assisting the Avengers, which is way better.

Fahey: We’re big fans of vlogging here at Kotaku. The opening is so sweet. Peter is really overeager and enthusiastic, but then I guess I would be too if they recruited me to fall down completely out of breath in front of Captain America (my only super power).

The movie gives Peter that brief moment of triumph, and then dives headlong into the Peter Parker we know from the early comics. Poor sad-sack Peter, waiting by the phone for the Avengers to call him back. 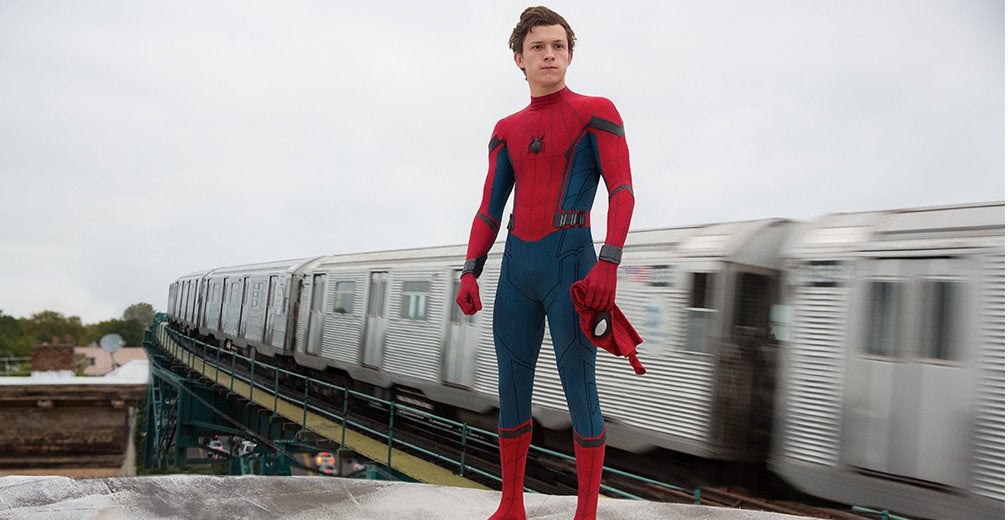 Patricia: The whole thing sets up Peter Parker really well… I remember watching The Avengers, kinda being annoyed at Spider-Man making a quip at every little thing — which I know is his shtick in the comics — but here they establish his voice better. It’s less of an annoying quirk than a showcase of just how earnest this kid is. He’s in over his head. He’s amazed. It reminds me a bit of how Kamala Khan freaks out at Wolverine in the comics when she finally meets him, because it’s like, they have been growing up with these superheroes as their idols, getting to be a part of that blows their friggin’ mind. But by that same virtue, because they’re not a big deal yet, yeah, he’s off in his own small-time world.

“Friendly neighbourhood Spider-Man” and all that.

Fahey: And he is just a kid this time around. Maguire was 30 when he played Peter Parker. Garfield was 26 or 27. Tom Holland turned 21 last month. Not quite a teenager, but much closer than ever before, and certainly more in tune with the whole teenage vibe than previous incarnations. His schoolmates all felt like they belonged in a high school. It was almost a super hero version of Degrassi High.

Patricia: Holy shit I didn’t know Maguire was that age when he played Spider-Man!

Patricia: Yeah, I’m glad they went with someone younger this time around. Really helps sell it. I loved their high school.

Fahey: Which kid did you identify with the most? 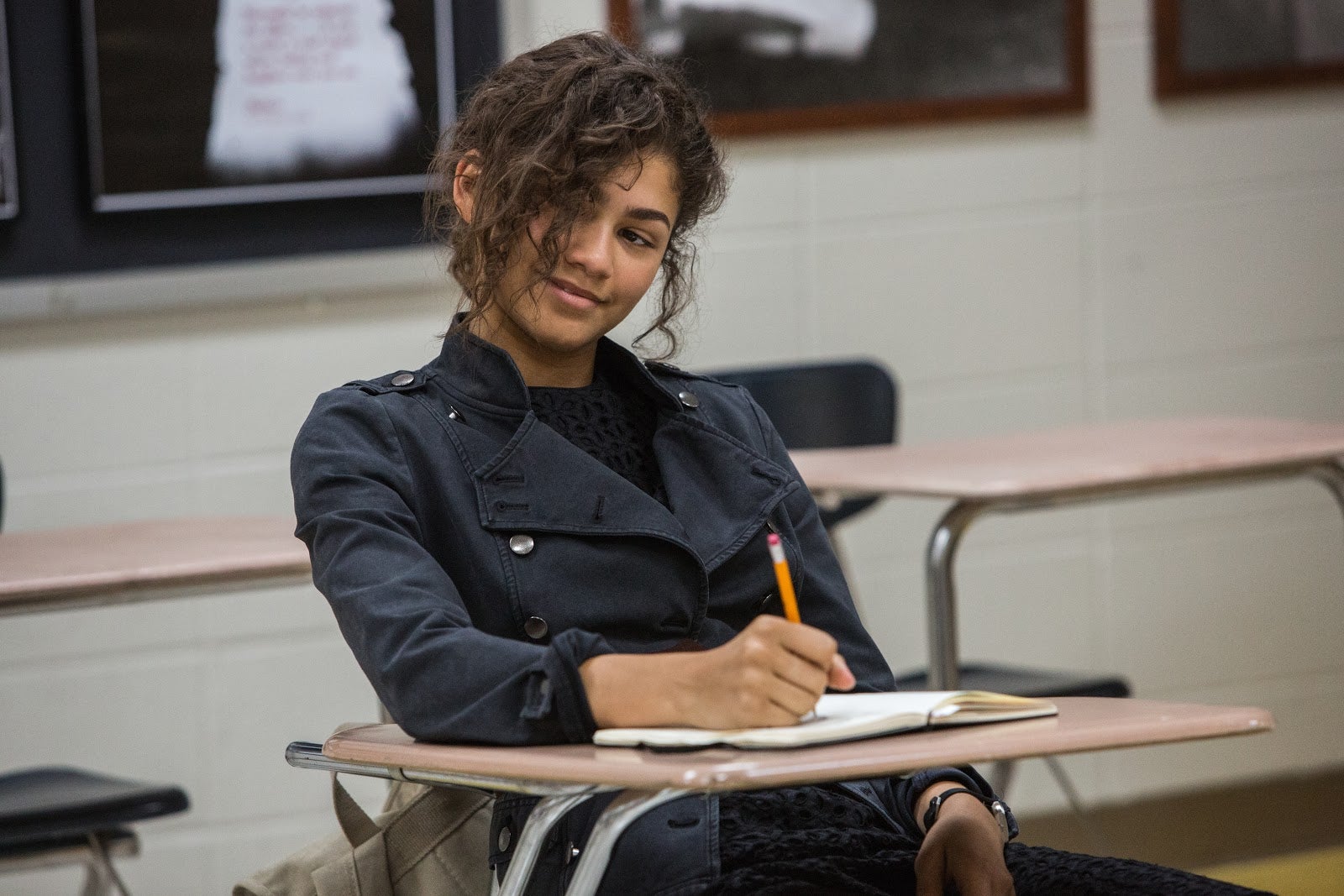 Patricia: Ahhhhh I don’t want to spoil who it is. Lets just say, the girl who gives Peter shit. You?

Fahey: I’m with Ned. Jolly, LEGO-loving, guy in the chair Ned. I knew as soon as he mentioned the LEGO Death Star (nice cross-over there, Disney) that he and I were soul mates. I was going to say the girl who gives Peter shit, but I think I ended up getting married to her and having kids. 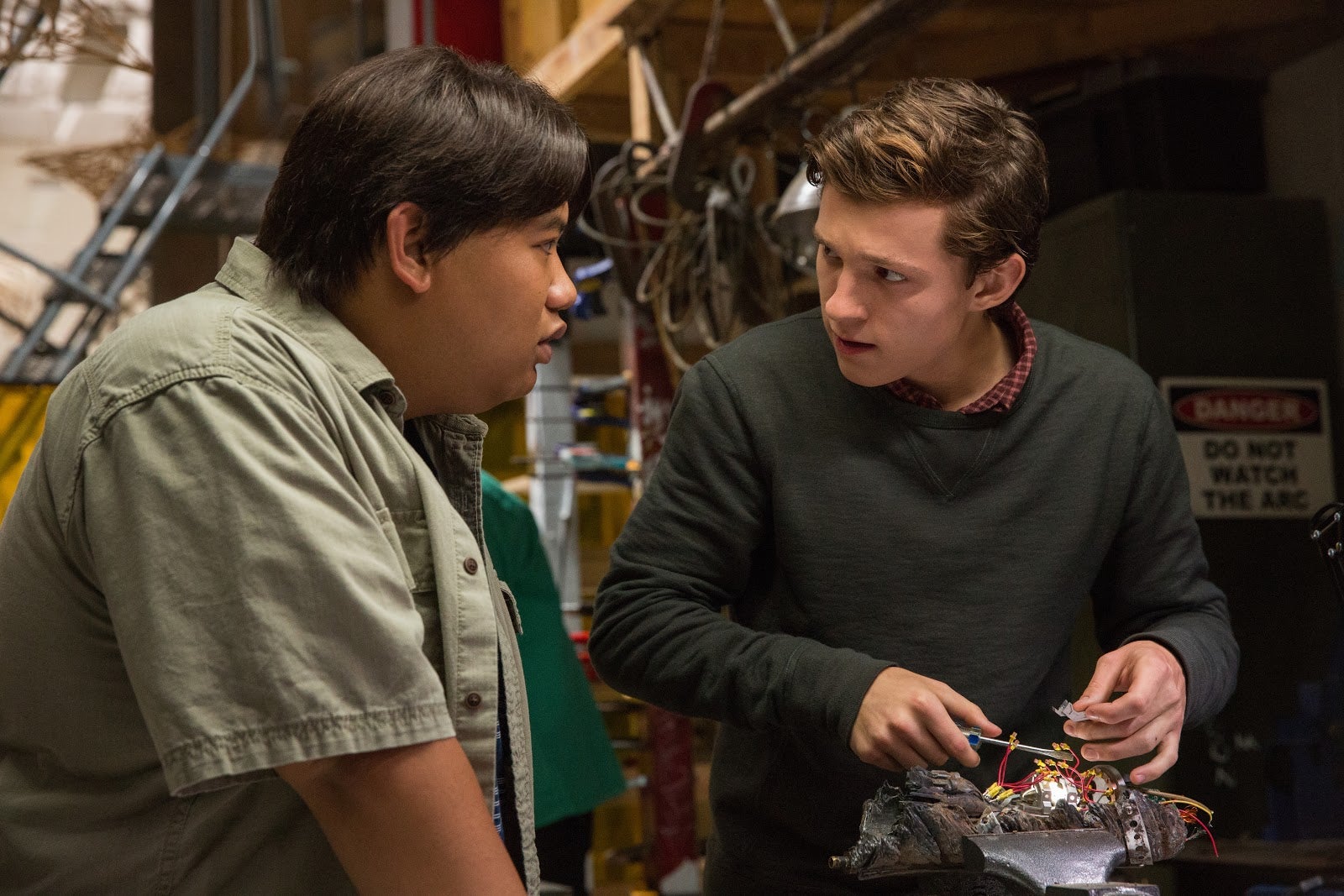 It isn’t too much of a spoiler, I think. I went into the movie without seeing the full cast list, so I’ll not ruin it for anyone, but she’s by far the coolest, most unique take on the character she plays.

Patricia: Fine, OK, lets just say it. MJ is the best character and you don’t even find out who it is until they end (if you’re like me, and didn’t read about it much, I guess). I’m really excited to see where they take her and I swear to God they better not kill her or something.

Ned is adorable! They’re all so good.

…I kinda liked Peter’s friends better than Peter himself.

Fahey: We’ll just throw a spoiler warning on up there. They did some really clever things with Peter’s classmates. Using first names similar to popular characters — Liz, Ned — without establishing them as the comic book characters. MJ is totally MJ though. Her twist is the best. She’s the nerdy girl who’s borderline obsessed with Peter in a harmless sort of way. In the comics, Peter always pined over MJ. This time around… well, hopefully it will surprise everyone.

Peter himself… yeah, he could be a bit much.

Patricia: What did you think about the villain in this movie?

Fahey: I think Michael Keaton is one of the best actors working today. He was good back in the day, but his comedy chops kept getting him cast in fluffier roles. His Adrian Toomes is far from the scenery-chewing villains of Spider-Man movies past. 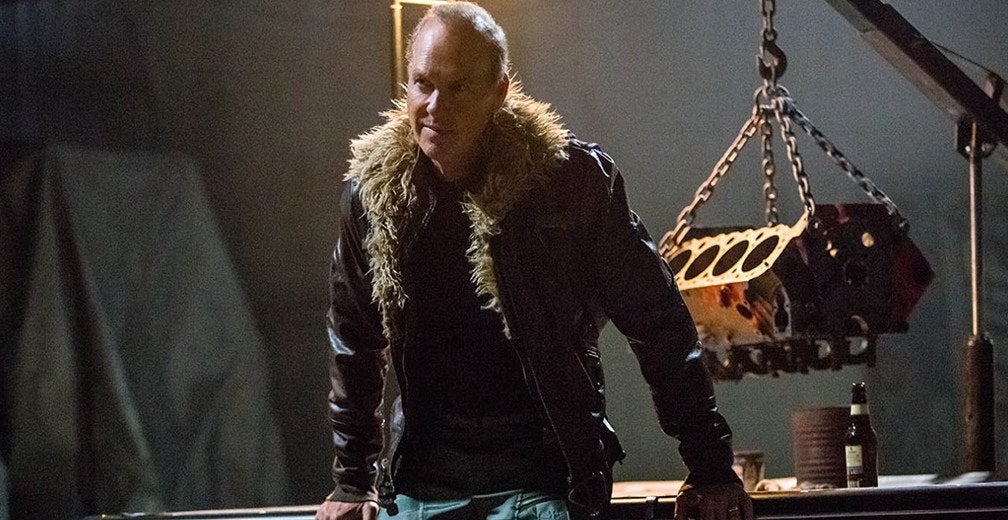 Patricia: Yeah, the casting was perfect. I like that the latest Marvel movies have been steering toward this idea of fallout — of dealing with the consequences of what happens when you’ve got these big heroes tearing the city apart, or accidentally killing people. In this case, the villain turns out to be a construction dude who gets screwed over. Like, yeah, he eventually builds this ridiculous contraption, but the stakes feel more human in a way.

Fahey: He’s coming from a real place. His stakes are to continue providing for both his work and home families. Following one of Keaton’s most masterful scenes — as he slowly realises Spider-Man’s identity — the threat he makes isn’t the ramblings of some power-hungry maniac. He’s a father protecting his wife and child.

Patricia: I watched Wonder Woman recently and I just couldn’t deal with the whole Aries thing. God-like mega villains are a hard sell, at least for me.

Fahey: There’s only so much you can do with a mega-villain. We’ll find out exactly how far that goes in the Avengers: Infinity War movies I’m sure, but for now, down-to-Earth is just lovely.

Patricia: The scenes where he figures out Peter is Spider-Man were priceless.

Fahey: Did you notice the traffic light turning green as soon as he made the leap? Cute direction there.

Fahey: Cute isn’t a word I’d use for any of the previous Marvel movies. Maybe Ant-Man. But this was a genuinely lighthearted/heartwarming movie. Between the art direction and music choices, it came dangerously close at times to a Wes Anderson Spider-Man parody.

Patricia: Was there anything in the movie you didn’t like?

Patricia: Yeah, there was more Tony Stark than I was expecting. I feel like I’m at a saturation point with him, though I understand why they did it.

Fahey: Not just his presence. He was a total arsehole. He drops Peter off after Civil War with a, “Don’t call us, we’ll call you.” He assigns Happy Hogan as Peter’s liaison, who couldn’t care less. No one answers his calls or texts. One of the major moments in the film involves Spider-Man attempting to stop a weapons deal on a ferry. The FBI shows up, Peter accidentally causes a bad guy to laser the boat in half. Iron Man shows up to save the day and then berates Peter for taking on too big a responsibility, saying something like, “I got your messages, that’s why I called the FBI!” You know what would have saved a lot of trouble? TELLING PETER THAT INSTEAD OF NOT ANSWERING HIS TEXTS.

Iron Man is the worst parent ever. 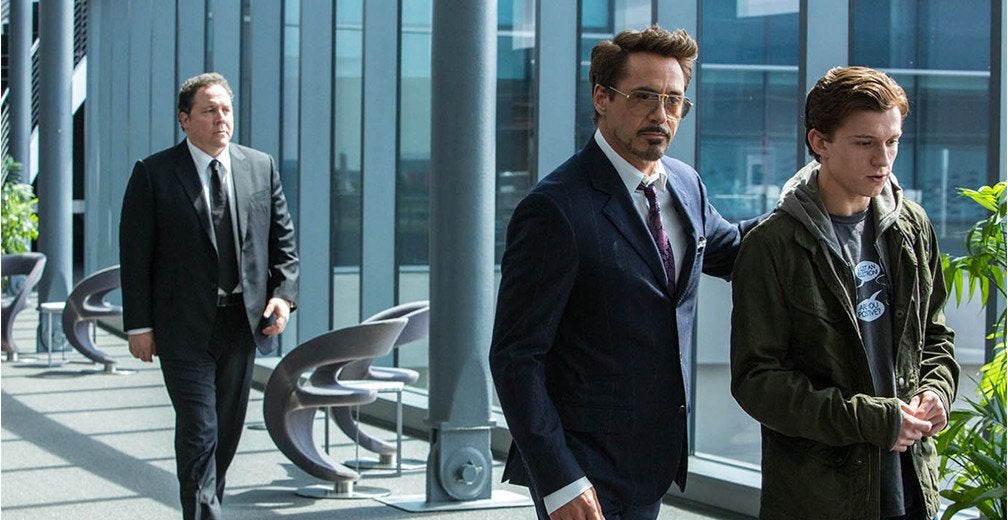 Patricia: Haha, and yet he’s trying to be a better parent!

There were some things I didn’t like but they’re all small details. Like how they kept trying to play up how hot aunt May was, and it’s just like… stop. But also I guess I was sad that after that infamous leaked email, there was no EDM in this Spider-Man movie.

Fahey: I imagine there’s a deleted scene with Pepper Potts (so good to have her back) berating Tony for being a dick and telling him to fix it.

Patricia: Yeah that kinda shocked me! I thought she was out of the movies. Lo and behold even though Gwenyth Paltrow is only in there for like five seconds she’s the second name on the credits.

Fahey: Because she’s the best. And Marisa Tomei was good casting but yeah, the “she’s so hot” thing was overdone. Other than that and Peter getting a bit too squeaky from time-to-time (hopefully he’ll be more self-confident in his next appearance), I really enjoyed Homecoming. It’s a light punk rock sort of Spider-Man. No EDM required.

Patricia: I liked it a lot. And I was thrilled that Peter didn’t join the Avengers at the end, because I really want to see what his journey is like on his own. I hope they keep it kinda small-scale like this one.

Fahey: And they will call it Spider-Man and Mary Jane.