Hellblade Is Great Because It’s Frustrating

I went into Hellblade expecting another fast, fun action romp from the folks at Ninja Theory, who previously made Enslaved and DmC: Devil May Cry. After playing for about 20 minutes, I had to put the controller down. I was so stressed out that I couldn’t take it any more.

It was the first combat sequence that did me — and main character Senua, a Celtic warrior hoping to free the soul of her dead lover from Viking Hell — in. After trudging through a forest whose trees looked like the bony fingers of Death itself, an unsettling chorus of voices chattering in Senua’s head all the while, I arrived at some ruins. Immediately, I noticed two things: one, the path I was following opened up in a way that screamed “combat arena”, and two, I was paying close attention to the game’s artifices as a means of distracting myself from all the dread.

Problem: The game hadn’t taught me how to fight.

As if on cue, an enemy appeared, an axe-wielding monstrosity assembled from dirt, twigs and sinew, striding forward with otherworldly purpose. Problem: The game hadn’t taught me how to fight. I ate a couple big hits before figuring out which buttons delivered light and heavy attacks. Each time I vanquished a foe, however, another appeared. As they chipped away at me, the screen went dark and began pulsating. The enemies turned into untouchable shadows. Senua fell, and a similar sort of darkness overtook her flesh, beginning with her hand. She screamed. 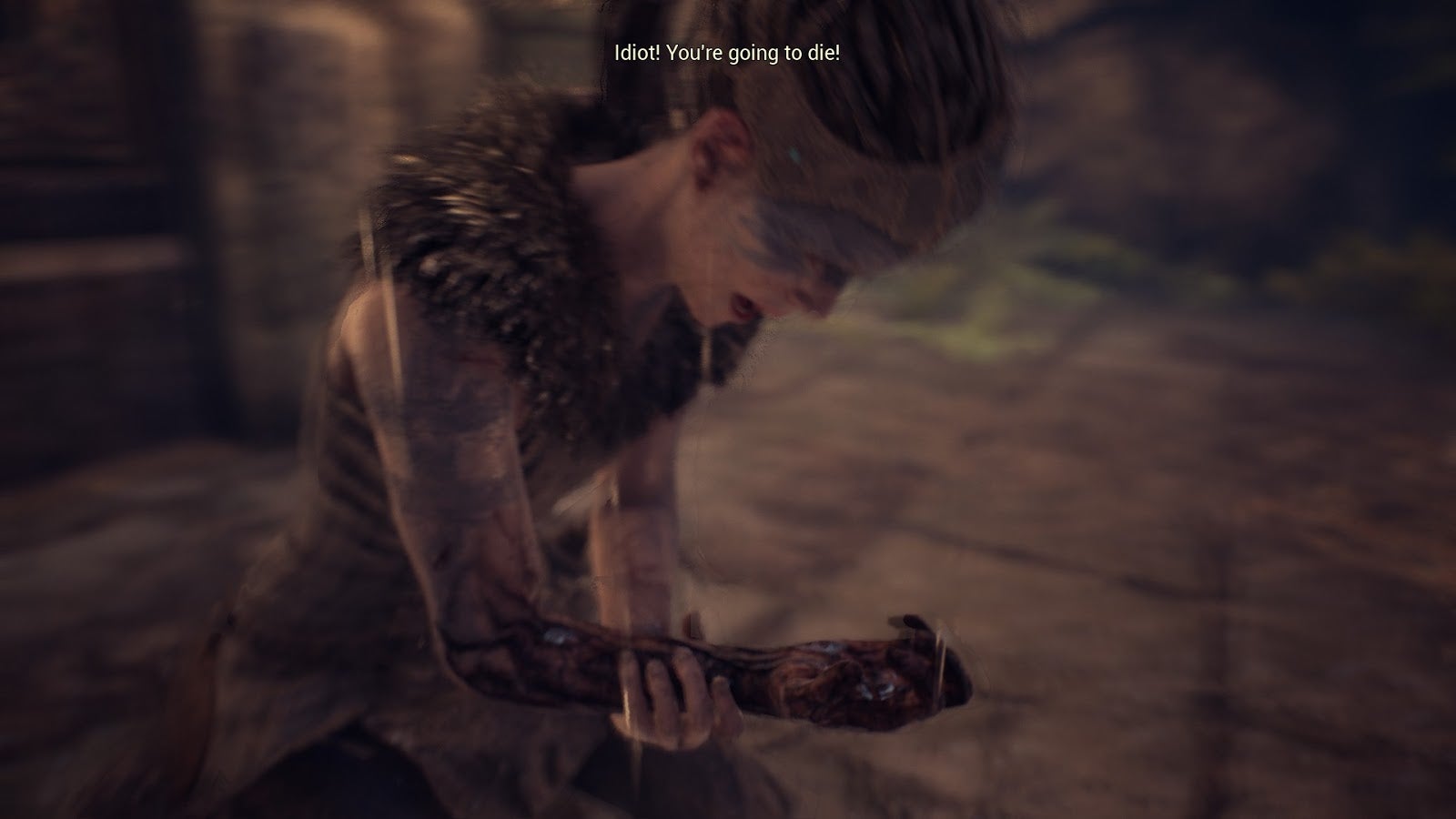 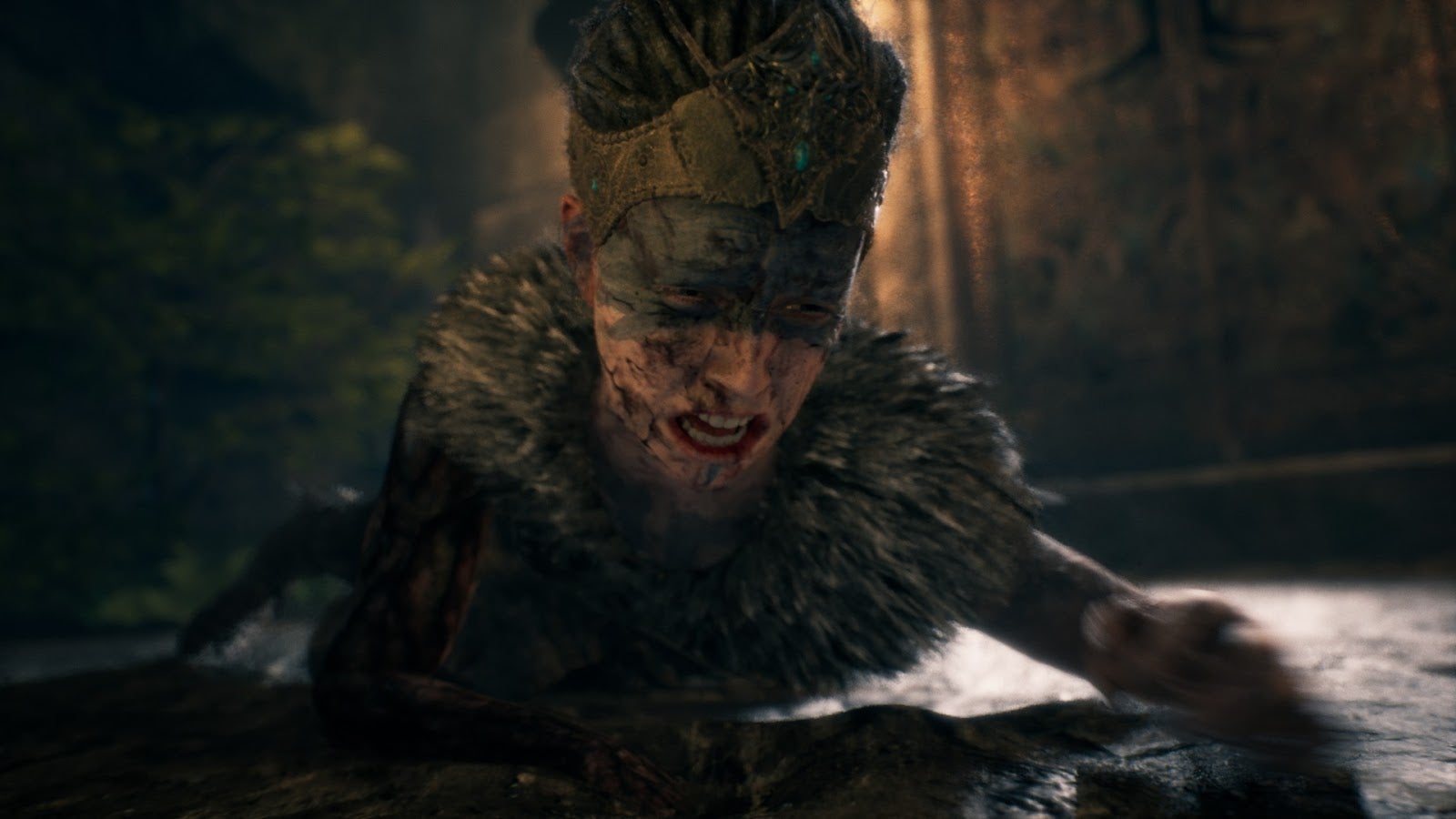 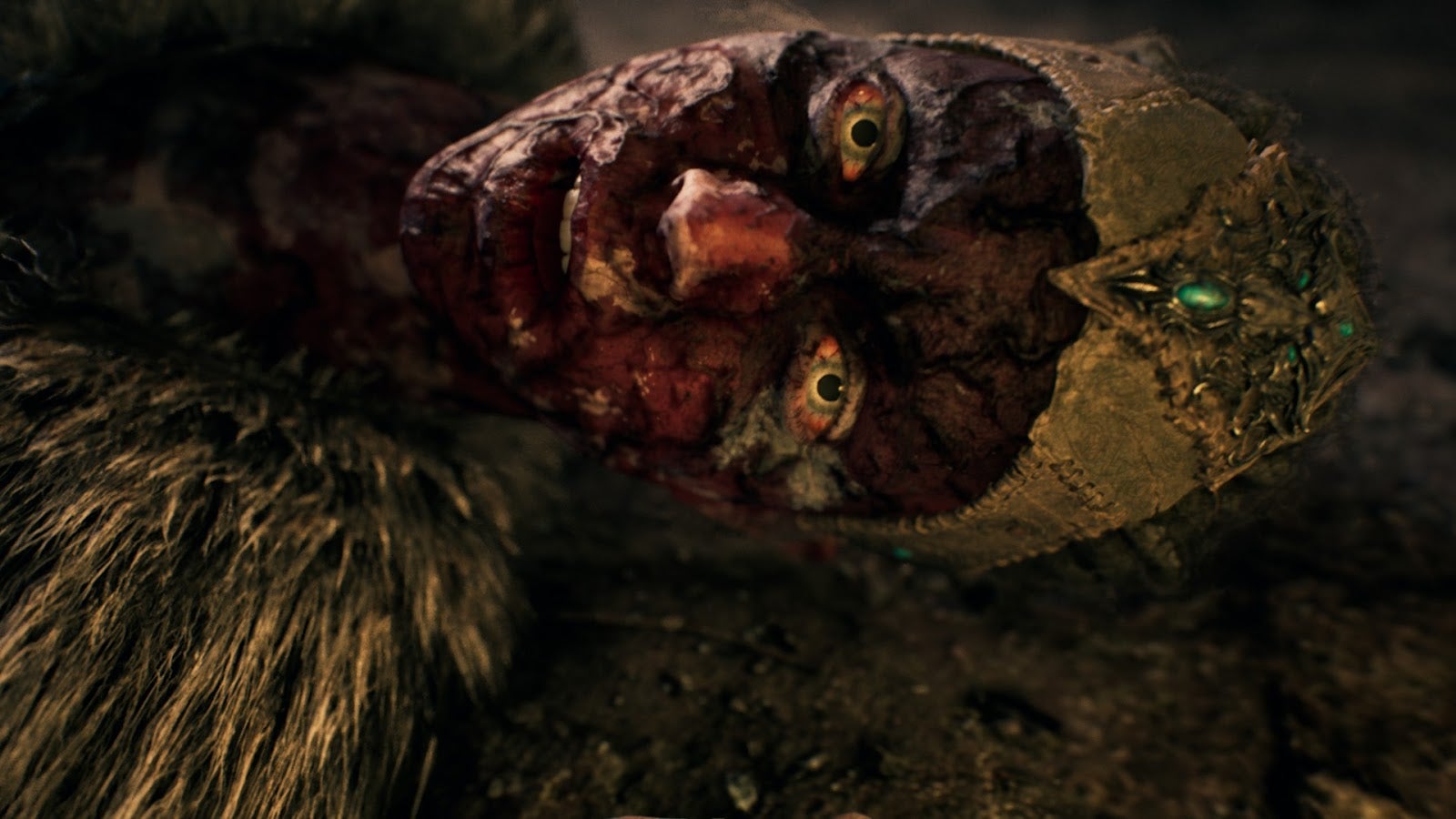 Until there was nothing left.

By this point, my heart was pounding. Depictions of utter helplessness in media really mess me up, but I’ve never had a video game send me reeling like this. As I set my controller down, the game informed me that Senua’s agonising death had only been a vision of the future, and that if I faltered enough times in combat, it would come true. It warned me that if the darkness, now a fixture on Senua’s hand, crept its way up to her head, it’d be a permanent game over.

Senua’s on the brink of a total breakdown. Her body is decaying. Her mind is home to incessant, irritating voices that never stop doubting, mocking and mourning her. What she’s seeing might not even be real.

In any other game, I probably would have been frustrated by this series of events. No combat tutorial before an encounter that sapped one of my precious few chances to mess up? Bullshit! But Hellblade had already laid its cards on the table. No health meters, no tutorials, no respite. This, I realised, is a game about a character who’s far past the point of learning the basics, or even being at the height of her powers.

Senua’s on the brink of a total breakdown. Her body is decaying. Her mind is home to incessant, irritating voices that never stop doubting, mocking and mourning her. What she’s seeing might not even be real. It’s a game that’s difficult to play not in the traditional video game sense, but because it’s actively taxing. It wants you to feel angry, afraid and exhausted. But it also wants you to persevere. 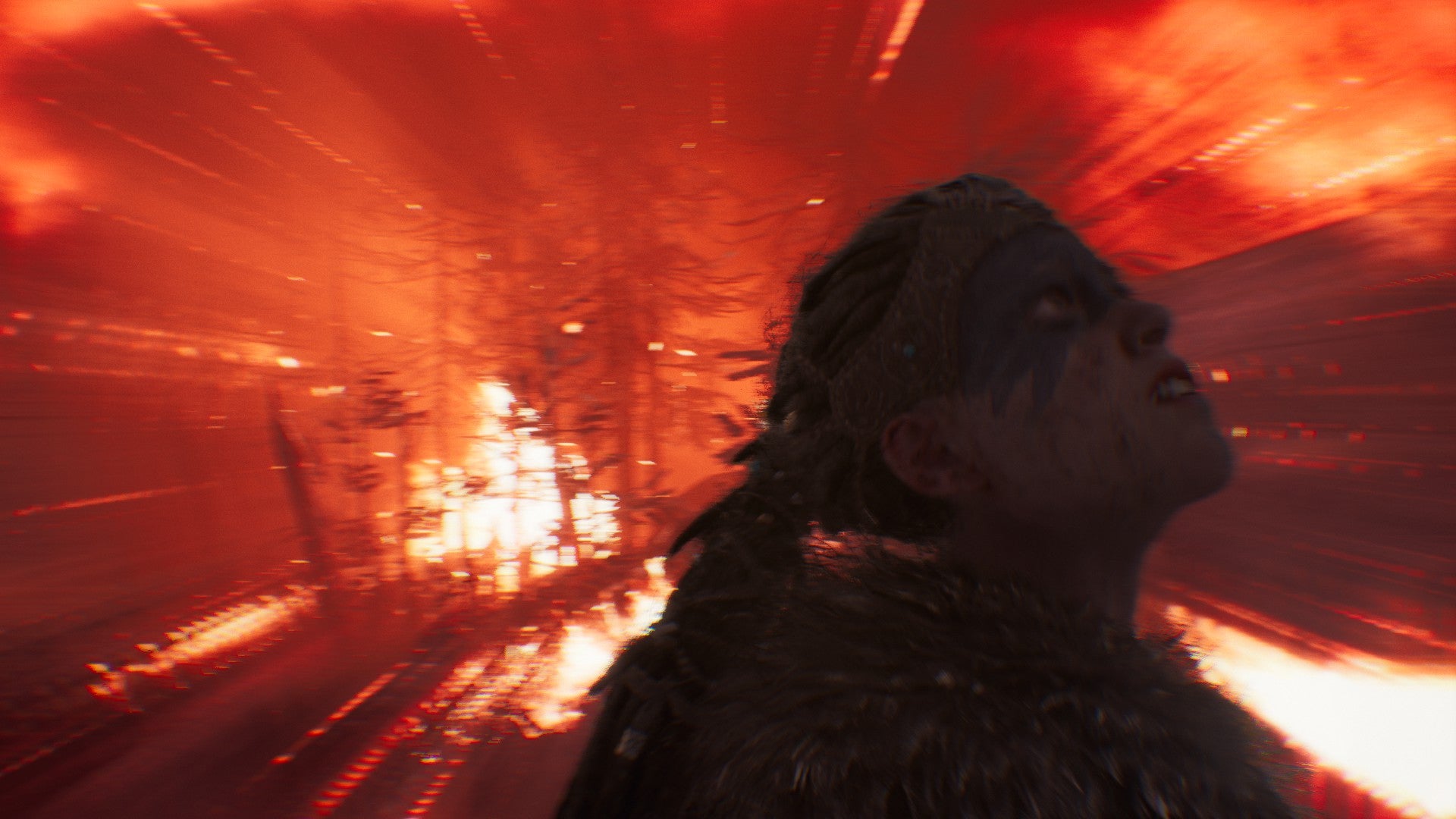 Hellblade‘s brilliance lies in the fact that it doesn’t merely represent these things through audio and visual elements. Unrelenting stress, dread, and mental exhaustion drip from the game’s mechanics. Let’s take the controversial pseudo-permadeath mechanic, for instance.

It can be mad frustrating — I’ve died three times so far, and every death has felt like it could’ve, should have been avoidable — but it means that each combat encounter comes with a heaping avalanche of anxiety. No fight is inconsequential. Even now that I’ve learned the ins and outs of combat, which is a bit too simple compared to other Ninja Theory games, I don’t feel comfortable. Instead, I’m anxious as hell. Every time Senua takes a hit, I wince in real life. There are no moments of chest-beating triumph. There’s just relief when it’s over.

I even appreciate the lack of clarity surrounding the permadeath mechanic, which does not simply count up a certain number of deaths and then declare that you’ve kicked the bucket. It resists being gamed or min/maxed, which makes it feel less like an element of a video game and more like an otherworldly force threatening to strangle you when you let your guard down.

The only times when Hellblade really falters come when the game breaks its weary yet confident stride, seemingly in fear that it’s spent too much time being unconventional. Puzzles, which often involve meandering around and aligning shapes in your field of view with objects in the environment, tend to feel out of place, and they’re never particularly interesting.

The game also has a tendency to drop you into combat encounters a little too frequently, draining fights of some of their tension and revealing combat’s repetitive nature. A clumsy camera and technical troubles compound this. For instance, I once got knocked behind an invisible barrier during a battle and died because I could no longer dodge or block enemy attacks. It sucked! The looming specter of permadeath only added to my frustration. 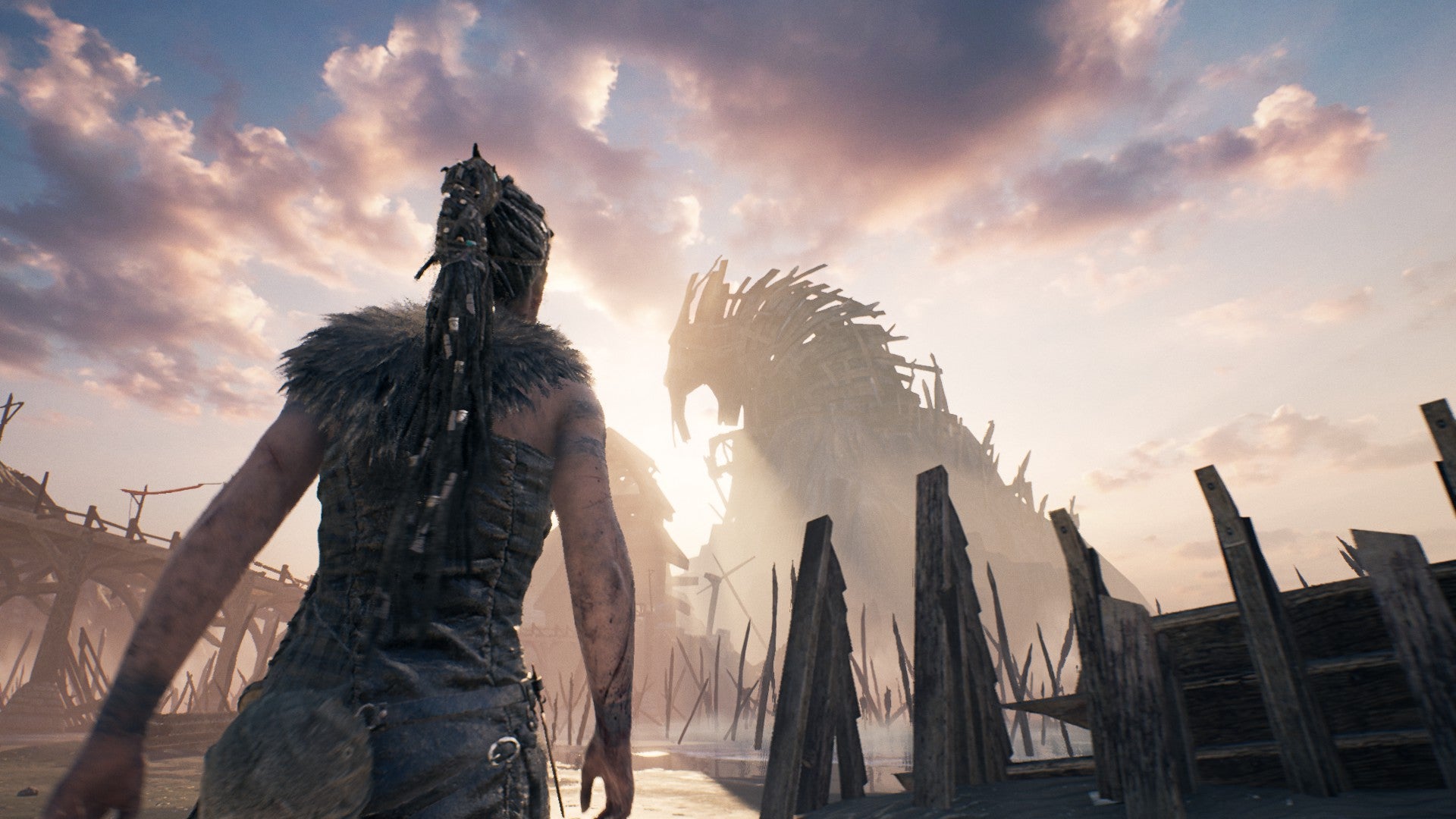 Hellblade does its best to strike a delicate balance. The game often seeks to make you feel frustrated, confused and helpless, both narratively and mechanically. In other games, those feelings are usually associated with setbacks and mistakes. Hellblade tries to re-frame them, turn them into key aspects of the experience that you eventually come to accept.

Similarly, it’s a game that has combat and puzzles that can be frustrating, but it’s not about those things in the way that notoriously frustrating games like, say, Dark Souls are — nor is it even about the same kind of frustration. It’s about a character and her struggle with mental illness. The rest of the game exists in service to that.

It’s a game that has combat and puzzles that can be frustrating, but it’s not about those things in the way that notoriously frustrating games like, say, Dark Souls are — nor is it even about the same kind of frustration.

Most of the time, it works, creating an atmosphere that’s suffocatingly stressful — one that puts you in Senua’s frail frame of mind so that you can understand just how astoundingly tough and determined she actually is each time she manages even the smallest successes. Occasionally, though, it misfires, and cultivated anxiety gives way to unintended irritation and rage.

After playing for about four hours, though, the highest praise I can give Hellblade is that I’m dreading the prospect of playing the rest of it, but I absolutely plan to. I don’t want to watch Senua helplessly writhe in agony again, nor do I want to curse in frustration as enemies slowly but surely kick her through death’s door.

I don’t want to play for 15 minutes and feel like I’ve aged an hour. I don’t want to reach the end, only to lose a few crucial fights and get a game over. I’ve accepted, however, that these things will probably happen, and I’ve decided — despite my fears and anxieties — to press on.