Switch Game Pulled From US Eshop Due To Ratings Problem

eshopesrbinfinite minigolfswitcht for teenzen studios
To sign up for our daily newsletter covering the latest news, features and reviews, head HERE. For a running feed of all our stories, follow us on Twitter HERE. Or you can bookmark the Kotaku Australia homepage to visit whenever you need a news fix.

Released on Nintendo Switch on July 24 (July 28 in the US), the mostly harmless Infinite Minigolf was pulled from the console’s US online shop on August 10 due to an unexpected change to its ESRB rating. Zen Studios says the change was due to a poster on the wall in the game’s “Giant House” level. I’m pretty sure we’ve figured out which one.

When I noticed a Reddit thread discussing the game being pulled due to the ESRB reconsidering its E for Everyone rating, I was surprised. I’ve been playing Infinite Minigolf on the PlayStation 4 for a couple of weeks and hadn’t noticed anything offensive. It’s a cute little golf game with creative courses and a ton of family-friendly user generated content.

But the PlayStation 4 and Xbox One versions are rated T for Teen, with a warning of suggestive themes. I loaded up my PS4 copy using PlayStation VR and looked around. Race cars, sports teams, spaceships… ah, there it was, tucked between the desk and the bed. If you look closely (click to enlarge) the image above, you’ll see a poster of a large, bloated demon with that seems to be several naked or barely-clad women cavorting about its groin. I never even noticed it.

Though Zen Studios has not confirmed the demon poster is the one that caused the ESRB rating issue, I didn’t spy any other posters that could be considered inappropriate. Just the hand stickers on the desk drawer, and I’m probably just reading into those. 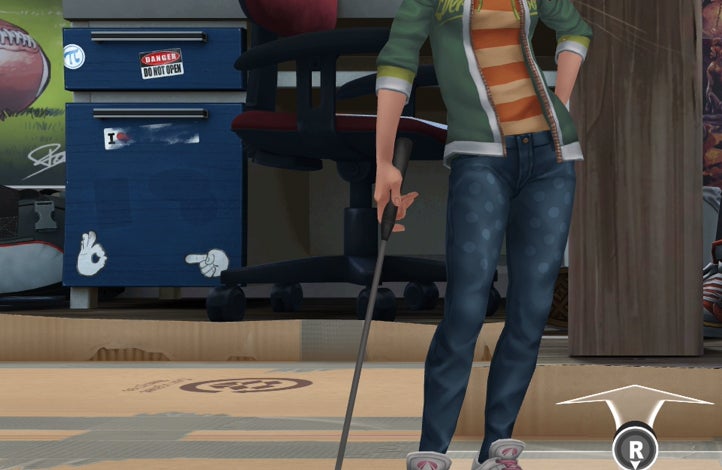