What Is A Major Comic Book Event Even Supposed To Be Any More?

Big superhero events are always marketed with promises of permanent status quo changes and shocking developments. The problem is, nobody believes that any more.

As of today, both Marvel and DC Comics are in the process of rolling out new major comic book events that, according to both publishers’ press releases about them, are designed to introduce new developments that are going to change their characters’ lives forever. (Or however long the events last.)

To be specific, Marvel’s currently in the middle-ish of its ongoing Secret Empire event and kicking off Generations, a series of books that pair up modern versions of characters such as Jean Grey and Captain Marvel with their classic counterparts. DC, meanwhile, is giving us Dark Night: Metal, a multiversal mystery involving metal, a bunch of evil Batmen from other dimensions, and an ancient, looming doom. Having spent time with books from each of these events, I can confidently say that all of them are wildly ambitious in terms of the scope of the stories that they want to tell. But for all of their ambition, not one of them has really grabbed me in a meaningful way. Shocking, strange, interesting things may happen in them, but whenever I put the books down, there’s this little voice in the back of my head asking, “What am I supposed to be getting out of this, exactly?”

It wasn’t always like that, though. There was a time when a big-arse, unwieldy event was synonymous with the idea of a huge, exciting adventure that used characters in new, imaginative ways. But, that kind of feeling has been increasingly elusive in recent years.

The thing that I most keenly remember about reading Marvel’s Secret Wars event as a child was how welcoming and inviting the story was to me, a kid who’d pretty much exclusively read the X-Men. Everything changed on that fateful day when I picked up a Secret Wars trade paperback.

Growing up in my house in the ’90s, it was understood that reading comics meant that you were reading trades plucked from the shelves of the nearest bookstore, because unlike individual issues, trades tended to include the entirety of a story’s arc for a set, relatively low cost. Being a fan of the X-Men TV series, it made sense to stick with X-Men trades that were filled with characters like Jubilee, Storm and Phoenix that I already knew and loved. But one afternoon in late 1999 (around the same time my local library started carrying comic book trades), I came across Secret Wars. And for reasons that I still don’t quite know, thought to myself, “Why not?” Those first opening pages of Secret Wars weren’t exactly what I was used to from my comics, but they were just what I needed to get into the event. Moments after being teleported away from the Earth, a group of Marvel’s most iconic heroes and villains find themselves standing in a strange platform floating in space. Rather than wasting time to ponder the specifics of how they got there, all of the gathered characters take a second to announce their identities to one another. Reading it now, the dialogue hits the ear with a thud, but to my nine-year-old self, it was incredibly helpful to have a quick rundown of Secret Wars‘ players.

In retrospect, it’s obvious what Marvel Editor-in-Chief and Secret Wars writer Jim Shooter and the entire Marvel Machine were trying to do: Get every single person reading the series ready to become emotionally invested enough in it to ensure that they’d become financially invested in it. In 2011, Shooter explained on his personal blog how Secret Wars first came to be thanks to a fateful partnership between Marvel and toy manufacturer Mattel, who were looking for a one-two punch to help them ship merchandise:

I offered an idea that was suggested by a dozen or so correspondents — usually younger ones — in the fan mail every day: one big, epic story with all (or many) of the heroes and villains in it. Everyone agreed. We went through a number of ideas for names for the toy line and series. Mattel’s focus group tests indicated that kids reacted positively to the words “wars” and “secret.” OK.

Mattel had a number of other requirements. Doctor Doom, they said, looked too medieval. His armour would have to be made more high-tech. So would Iron Man’s, because their focus groups indicated that kids reacted positively…etc. OK. They also said there had to be new fortresses, vehicles and weapons because they wanted playsets, higher price point merchandise and additional play value. OK.

Secret Wars was unabashed about its underlying capitalist motives, but as cold and lifeless as that might sound, the series’ story itself was a bright, lively adventure that not only made Marvel money hand over fist, it also changed the entire comic book publishing industry.

It’s important to note that, going back to the 1960s, DC used to have multiversal crossovers with the Justice Society from Earth-2 and the Justice League on Earth-1. But these were self-contained. Likewise, at Marvel, there had been massive, important storylines such as the Dark Phoenix Saga that had wide reaching ramifications for an individual series. Secret Wars changed the game by involving key players from across a publisher’s entire portfolio. More than that, though, the events of Secret Wars had long-lasting impacts on Marvel’s shared comic book universe, such as introducing Spider-Man’s black symbiote costume — a concept that would later be adopted by other publishers like DC when they got around to conceiving of their own large-scale events.

In the years following Secret Wars, events such as Crisis on Infinite Earths, Marvel vs DC and Civil War all tapped into that same basic idea of getting all the toys together in the sandbox in order to shake things up. But as time’s gone on, the nature of Major Comic Book Events has changed. What were once transparent cash grabs that came with the benefit of some truly fantastic comics gradually became the go-to answer to goose comics sales (toys, not so much) and renew interest in books. While there were still events such as Marvel’s House of M and DC’s New 52 that fundamentally changed their books, there were also things like Inhumans vs. X-Men and War of the Gods that were less events in the traditional sense, and more like sprawling plot lines gone wild that demanded you buy issues from various series — despite the core story only truly involving a set group of central characters.

That isn’t to say that there haven’t been rock solid events that managed to be weird, fun and fantastical in ways that actually make you want to venture outside of your comfort zone and try something new. Ironically, Marvel’s Secret Wars event from 2015 managed to be even more insane than the series it shares a title with by literally smashing Marvel’s various universes together to form a new, nonsensical Battleworld.

Where the original was simply a planet of the Beyonder’s creation, the 2015 Battleworld was an amalgam of characters and plots that introduced new teams such as the A-Force, an all-women team of Avengers led by Captain Marvel, and the Thors, a squad of hammer-wielding Thunder gods including the ever-badarse Thororo Munroe. Secret Wars was the sort of event that didn’t exactly make the most sense while you were zoomed out, but once you picked up a book and latched onto a character or an idea, the series was very good about making the larger stage it had set seem worth getting into. 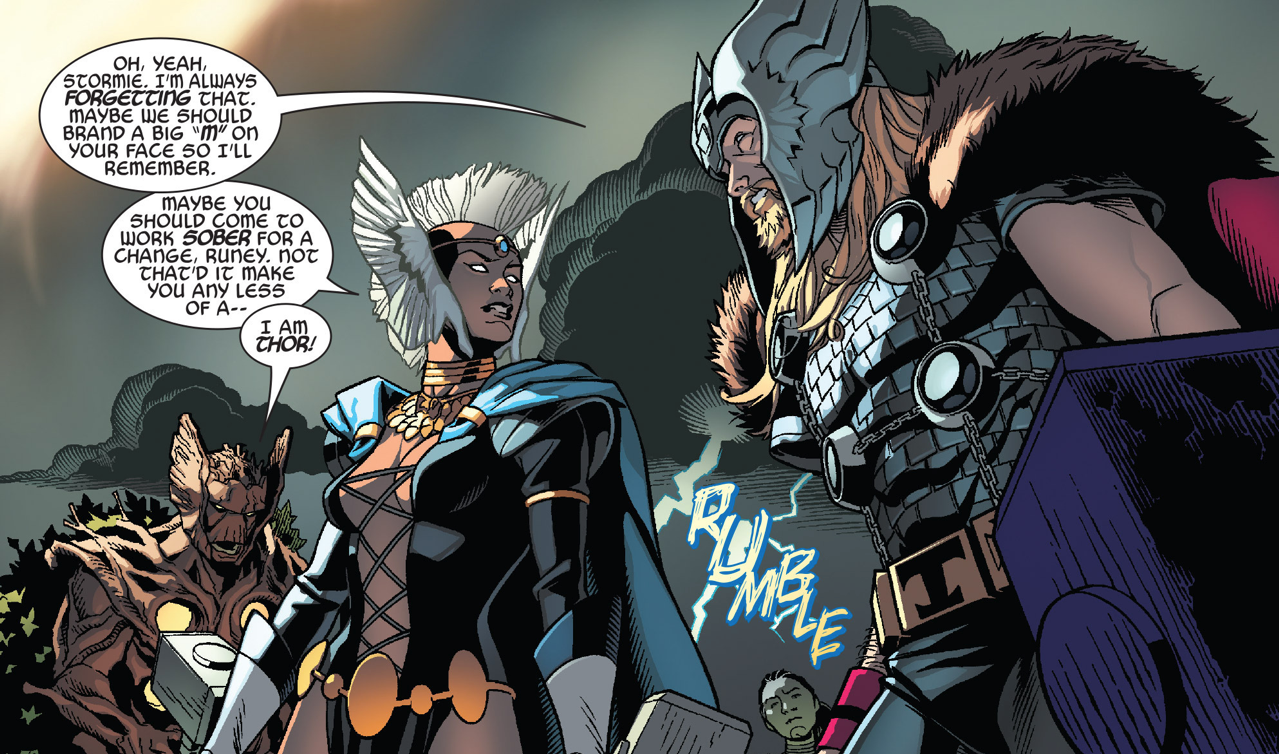 Part of the problem is that, as more and more people have become conversant in the language of comic books, publishers have understandably drifted more toward the kind of (forgive me) cinematic, but somewhat flat, scenarios that vaguely echo comics’ motion picture cousins. This has led to events like Civil War II that spend a lot of time telling you that what you’re reading is very important and impactful, but don’t always do a good job of making you feel that way.

What’s more, trying to use an event to get into a new series or character right now requires an almost Herculean effort of background research and double checking just to understand who’s who. I have read Dark Days: The Casting, Dark Days: The Forge, and the first issue of Dark Nights: Metal, and I still can’t really tell you what’s going on other than the fact that the Justice League very briefly had an ugly giant robot, and Batman’s been tinkering around with some multiversal crap that he probably shouldn’t be.

Reading subsequent issues of the core series and its plethora of tie-ins will probably (hopefully) clear up some of my questions, but there’s something a rather ho-hum about digging into a new event and walking away thinking to yourself, “What the hell did I just read and do I even want to keep reading it?”

Comic books are a wildly different medium than they were back in the ’80s, and it’d be unrealistic to expect for today’s events to be quite like their forbearers. But at the same time, I can’t quite shake the feeling that now, in this modern age when superheroes and comic books have become massive pop cultural juggernauts, big events could and should be better.

How they could be better, though? I’m not quite sure.