Zelda: The Wand Of Gamelon: The Kotaku Review

In 1993, Nintendo made the inexplicable decision to licence The Legend of Zelda to Phillips Media, creators of the CD-i. Among the resulting games is Zelda: The Wand of Gamelon. It’s known as one of the worst games ever made. Replaying it 24 years later reveals a game with interesting ideas marred by atrocious execution.

Zelda: The Wand of Gamelon is light on story. It follows Zelda as she explores the land of Gamelon after the King of Hyrule and Link go missing during a quest to stop Ganon. It’s the first game that feature Zelda as the protagonist. The Wand of Gamelon in the title is a magical relic that can defeat Ganon. The game was developed by Animation Magic, which packed the game with fully-voiced cartoon animations meant to take advantage of the CD-i’s relative power, but the results are jarring, as characters pop up on screen and yell at players with terrifying voices.

That confusing and cartoonish narrative presentation mixes with gameplay decisions that, while interesting in concept, often fail in action. 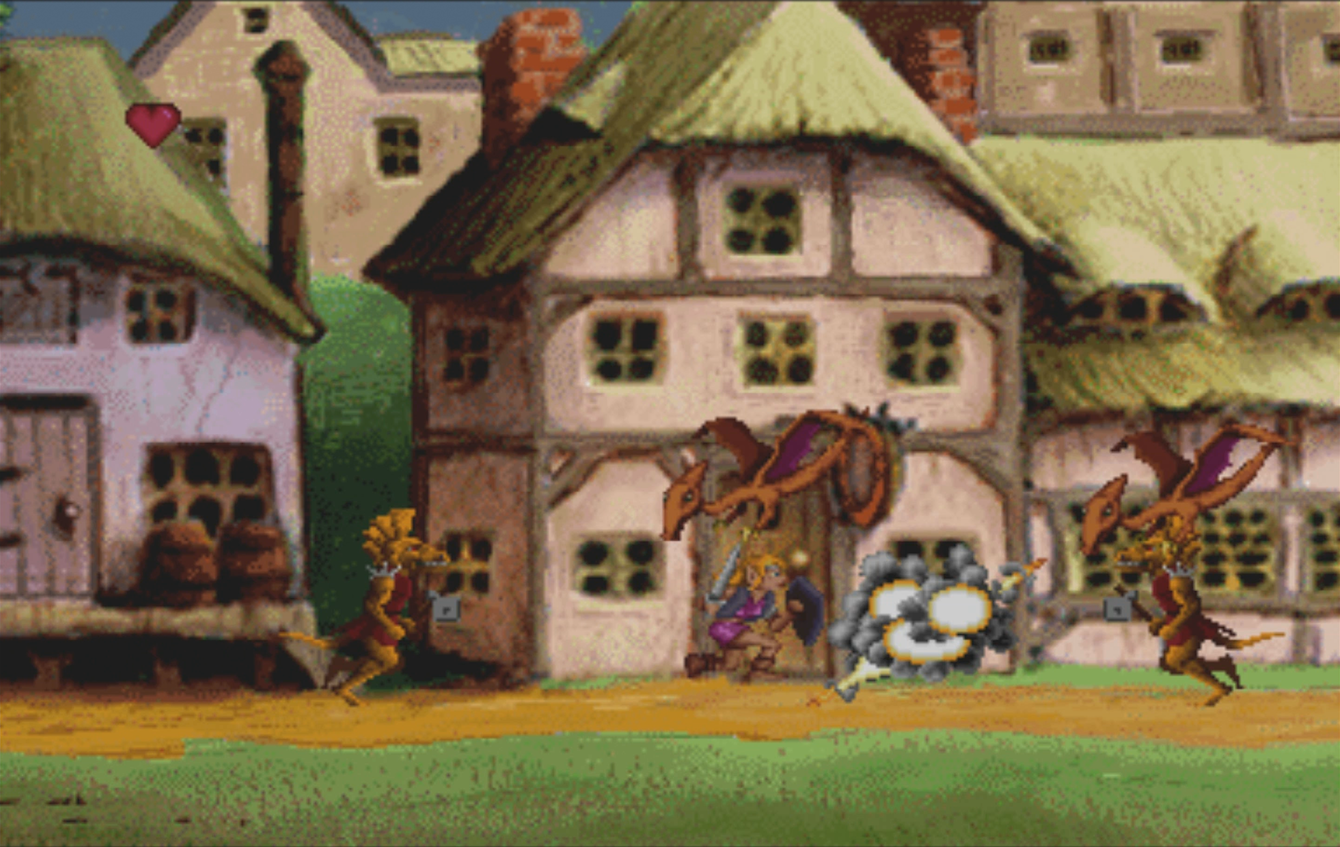 It is difficult to tell what is happening during gameplay.

The Wand of Gamelon plays a bit like Zelda 2: The Adventure of Link. It’s a side-scrolling action game where player collect special items to help them clear obstacles or defeat bosses. This is a fine format for a Zelda adventure. Players navigate new areas, fight monsters, meet townspeople, collect items, and slowly explore the world. What makes it difficult is how poorly implemented everything is.

The Wand of Gamelon is difficult for annoying reasons. Locations swarm with enemies that can hit Zelda from a variety of angles that she can’t defend. Enemies who throw things at her or fly overhead can easily exploit her avatar’s generous hitbox. There are no invincibility frames; a single enemy rushing down on Zelda can end her life in a manner of seconds. The only defence she has is a shield that can be used to block projectiles, but she can only raise it after standing still for a moment. If players are lucky, this will stop an impending blow. More often, it leaves them exposed from another angle. The only viable way to play is aggressively, which can be fun once a proper pace is found and the controls are wrangled in. Unfortunately, that is a difficult task to master as combat blurs into a mix of menu navigation, haphazard movement, and frantic sword stabs to fight off infinitely spawning enemies.

Controlling Zelda is marginally easier than sedating a wild bull. Jumping is a nonsensical enterprise with impenetrable rules. Sometimes, you will jump as high as you want. Sometimes, you will stop halfway across a pit and die. Sometimes, you will jump randomly for no reason other than the fact that The Wand of Gamelon hates you. Using items complicates this. To use a bomb or climb to a platform with a rope, players must first crouch and press the action button to open the menu and select it. Then, they need to press up and the action button to use it. This usually results in another wild jump. 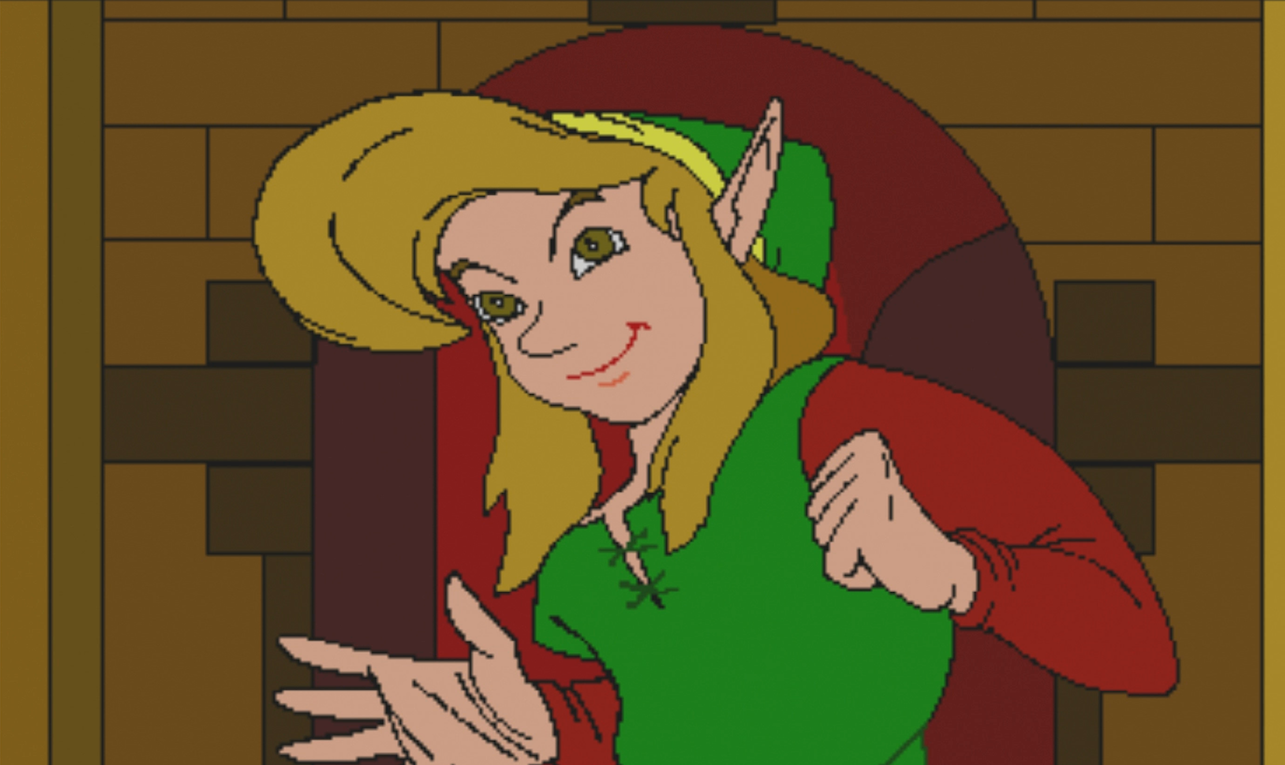 Zelda: The Wand of Gamelon

“I can’t wait to bomb some dodongos!”

Level design in The Wand of Gamelon is more terrifying than any of the game’s monsters. They’re inscrutable. The backgrounds are matte paintings with no sense of depth and no indication of what is or is not a platform. While each new town or forest looks lush and pleasant, they are nearly impossible to navigate. Branches that look like platforms have deceptive collision that often sends Zelda plummeting to her doom, and there are times when the only way to progress is through a window or gate that looks nothing like a serviceable route through a level. The nadir is a difficult swamp level unlike anything ever put into a game. Platforms are not indicated, players must ride on crocodiles that randomly submerge into the water and instantly killer passengers, and wide jumps require pinpoint platforming that the controls can’t manage.

In spite of this mountain of befuddling design choices, The Wand of Gamelon is surprisingly playable thanks to a loose structure and helpful items that eschew the traditional dungeon-focused Zelda design for a broader quest focusing on helping incidental characters and locating the right item to trick bosses into easy defeats. The Wand of Gamelon feels like a game about a clever princess and, if you manage to push through the fundamental design problems, there’s actually a fun adventure to be had.

Progression in The Wand of Gamelon is tied to the acquisition of key items. Instead of delving into intricate, puzzle-filled dungeons, Zelda journeys from village to village and navigates forests, beaches and mountains to fetch items for non-player characters. It may sound like a giant fetch quest, but it doesn’t come off that way. The adventure feels much looser. An old woman might ask for a monster egg and give you a magic flute in exchange. That flute can be used to freeze enemies to clear difficult platforming segments. A swamp hermit wants a mushroom from the forest? Get it for him and he’ll give you the power glove that helps you break rocks and explore more of the world. The Wand of Gamelon has a freewheeling mood, and while it is sometimes hard to know where to go, it is gratifying to receive items from characters and not just from random treasure chests. 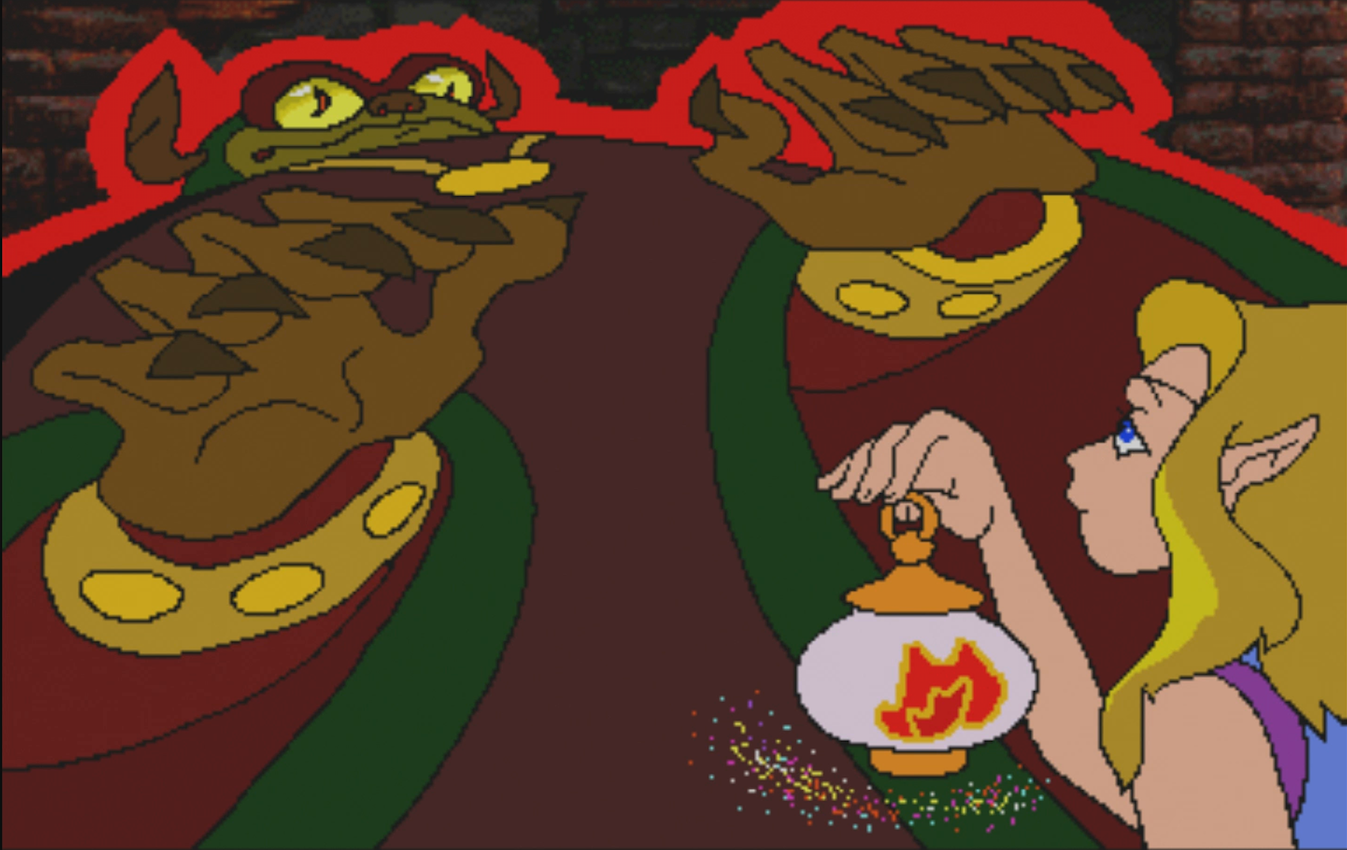 That’s Ganon. He hates lanterns in his lair.

These items are also the key to counterbalancing the game’s initially steep difficulty. An early upgrade permanently allows players to shoot beams from their sword while a magic cloak protects Zelda from damage at the cost of spending a few rupees per use. Boss battles are made simpler too. Want to defeat the mummy-like gibdo? Just toss a magical shroud on him for a one hit kill. While this does rob the game of climactic battles, it creates a sense of guile. Zelda’s adventure is less about combat than any of Link’s and better for it.

The Wand of Gamelon‘s world ends up being surprisingly whimsical. It’s full of witch sisters, an Iron Knuckle that looks more like an anime mech, and a wolf-headed beast whose head transforms into a pair of giant lips. The land of Gamelon lacks consistency but that also means that it surprises in ways that the much more familiar Hyrule never could.

There’s no easy way to revisit The Wand of Gamelon and its strange world outside of buying a CD-i or, as was my case, emulation. It is a nearly forgotten piece of Zelda history that exists far more as a punchline than anything else thanks to its hard edges. Viewed in retrospect, The Wand of Gamelon is more than a mere punchline.

The Wand of Gamelon is very rough and probably the result of someone in the ’90s wishing on a Monkey’s Paw for a new Zelda game. But in seeking out a different kind of Zelda adventure, it embarked on an interesting experiment. It mostly ended in failure but, for brief moments, it’s kind of beautiful.

If you want to watch my playthrough of Wand of Gamelon, you can view it here.