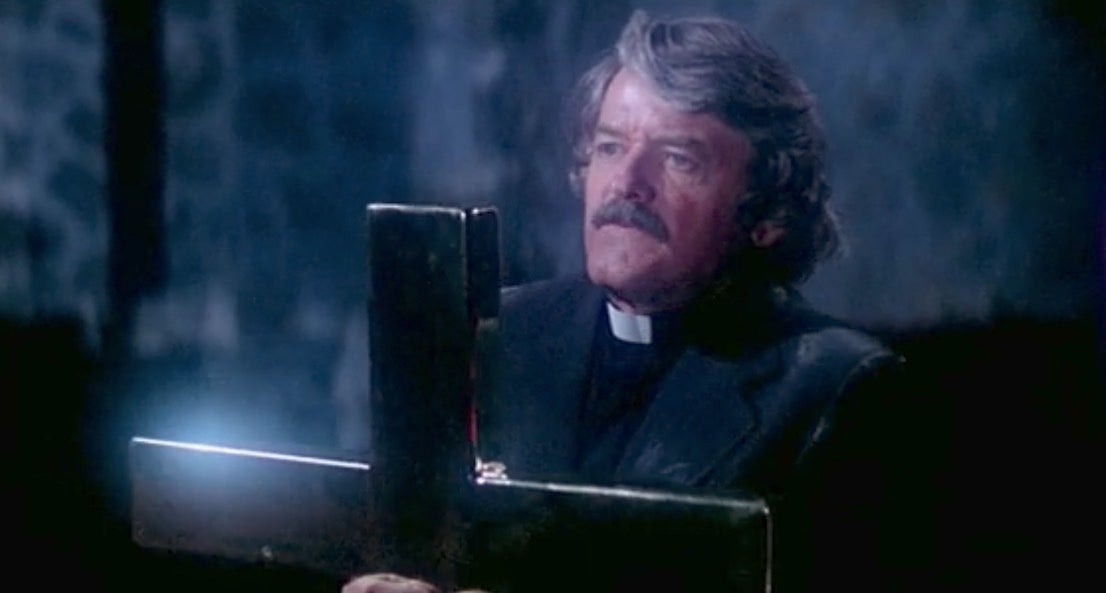 There are good actors who thrive in horror films, like Bruce Campbell and Jamie Lee Curtis. Then there are great actors who aren't at all associated with the genre — but who have at least one great (and/or ghoulishly entertaining) horror-movie appearance on their resumes. Here are our favourites.

Wolfen has an overall excellent cast (it also stars Gregory Hines, Diane Venora, Tom Noonan, and Edward James Olmos), but Finney does the most heavy lifting as a troubled NYPD cop tasked with solving a very strange series of murders.

Don't be fooled by the title; this isn't a werewolf tale, but rather an unusual story about gentrification, in which a group of Native American wolf-spirit shape-shifters use their powers to protect their turf from a hotshot developer and other interlopers.

That sounds dicey, especially for a movie made in 1981, but the Wolfen are portrayed surprisingly sympathetically — plus, Finney anchors the scares and suspense with plenty of gravitas.

I was reminded of this 1980 movie while compiling last week's list of the scariest haunted houses in movies and TV, and it inspired the subject of this current list. The house in The Changeling is indeed textbook spookylicious — a Victorian rambler, complete with a tiny ghost and a terrible secret.

But the formidable Scott (who won, but refused, a Best Actor Oscar for 1970's Patton, calling the ceremony "a meaningless, self-serving meat parade" and saying he opposed the idea of actors being in competition with each other) is the reason The Changeling remains so memorable.

He plays a man who loses his family in a terrible tragedy, and in his bid to get a fresh start, unwittingly gets embroiled in another family tragedy that isn't even his own. Things could have gotten awfully melodramatic, but Scott treats the material with the seriousness you'd expect, and that makes The Changeling's scares even scarier.

The legendary Western actor, who made dozens of films and also starred on the 1950s TV show The Rifleman, made a handful of horror flicks in the 1970s and '80s. But (plastic) head-and-shoulders above the rest is this cult-beloved tale of a disturbed man whose roadside-attraction mannequin museum is, of course, a front for murder.

Woe unto the nubile youths whose car breaks down at the worst possible moment, and soon become fodder for his latest exhibit. This 1979 movie was made at the height of slasher mania, and it is a surreal, genuinely nightmarish delight, thanks to all those mannequins and their creepy flapping jaws — and Connors, whose against-type, awesomely creepy performance deserves major props.

4) Ida Lupino, The Food of the Gods

Lupino is best-remembered as one of Hollywood's most pioneering female directors, working within a mainstream studio system that was absolutely not supportive of women behind the camera. (Still isn't, to be honest.)

She's widely recognised as the first woman to direct a film noir, 1953's The Hitch-Hiker, and she worked extensively in TV, becoming (among many other credits) the only woman to direct any original Twilight Zone episodes.

But she was also a damn good actor. The Food of the Gods — a 1976 H.G. Wells-inspired tale, lovingly shellacked in schlock by director Bert I. Gordon — may not be the best showcase for her talents, but she brings an air of dignity to this movie, even while battling a plague of giant rats.

There aren't a lot of real scares here, but this pre-CG relic is a lot of fun — and the giant-critter effects (dear God, the chickens) are somehow both cheesy and unsettling.

This versatile and much-lauded actor is famed for roles in prestigious films like All the President's Men, Into the Wild, and Lincoln, as well as his legendary Mark Twain stage show.

But Holbrook has also made some excellent forays into genre — it was hard to pick a favourite between Creepshow and The Fog, to be honest, but his turn as Father Malone in John Carpenter's 1980 tale of ghost-besieged Antonio Bay is the more pivotal of the two.

It mostly comes down to the film's last act, when Father Malone saves the entire town by returning a cursed gold cross to its rightful owner, an undead seafaring leper with an axe to grind. He also gives up his own life (and his head) in the over-the-top, one-last-scare final confrontation.

Remember when killer bees were the greatest threat the American people could possibly imagine? Simpler times, captured in this 1978 Irwin Allen disaster pic which has made so many "worst films" lists that you know it's actually amazing.

A shouty Caine gets the most screen time, but Fonda plays a heroic bee expert so desperate to develop an anti-venom that he uses himself as a test subject. It doesn't work out so well for the poor guy, but Fonda had a hell of a career behind him at this point, as well as an Oscar (for his final film, 1981's On Golden Pond) in his future. And there's no denying only a world-class talent could class up a stupidly enjoyable movie like The Swarm.

Like many of the films on this list, Robert Zemeckis' horror comedy has a stellar cast (Goldie Hawn, Bruce Willis, Isabella Rossellini), all of whom appear to be having the time of their lives. Streep can famously do anything — serious drama, wacky comedy, action movies, biopics, musicals, any foreign accent ever spoken — but she doesn't have much horror on her resume. (Remember her Wes Craven movie? Yeah, it was an inspirational tale about a music teacher.)

But the gruesome delight Death Becomes Her, in which a pair of youth-obsessed rival actresses discover the secret of immortality, is one big exception. The visual shock of this 1992 film is helped along by Oscar-winning special effects that brought body contortions to a whole new level — especially the sight of the usually elegant Streep stumbling away from a nasty fall with her head completely twisted backwards.

Curtis will be remembered for all-time classics like Some Like it Hot, The Sweet Smell of Success, and The Defiant Ones. But many genre fans have a soft spot for his role in cult oddity The Manitou — he plays a psychic, but his role is really "boyfriend looking on in escalating levels of freaked-out horror," as his girlfriend (played by Susan Strasberg) sprouts a hideous, pulsating tumour on her neck.

(Spoiler: it's really a fetus that's the reincarnation of evil Native American mystic Misquamacus, returning to life with vengeance on his mind. As you do.)

The Manitou is overwrought, weird, repulsive, culturally iffy, and yet strangely wonderful — and the fact that a show biz legend plays such a prominent role in its madness only makes it that much more recommendable.

In which a wealthy, Rome-based American diplomat agrees to switch his dead infant with a convenient orphan without a) telling his wife or b) considering the possibility that the mysterious youngster will grow up to be the Antichrist. (Atticus Finch would never.)

Peck is magnetic as a man whose perfect life shatters before his eyes as he realises too late he's unwittingly become part of a horrific conspiracy — and the film is packed full of iconic moments that are just as chilling as they were back in 1976.

10) Lillian Gish, Night of the Hunter

She began her silver screen career as a silent-film superstar, but Gish's epic career stretched into the 1980s. Maybe her most notable speaking role, however, came in the only film directed by another acting legend, Charles Laughton.

It's a fantastically grim thriller about a creepy preacher who's really a psychopathic killer (Robert Mitchum, rocking the "love" and "hate" knuckle tattoos) who woos the widow (Shelley Winters) of a recently-executed bank robber, intent on getting his mitts on the stolen money her husband left behind. Once she's been disposed of, her two kids seek shelter with Gish's Rachel Cooper, an elderly woman as kind to children as she is steady with a shotgun.

"Leaning," the sparse duet that Mitchum and Gish sing in the moments leading up to their inevitable showdown, remains one of cinema's eeriest moments.