pes 2018ps4sportsxbox one
To sign up for our daily newsletter covering the latest news, features and reviews, head HERE. For a running feed of all our stories, follow us on Twitter HERE. Or you can bookmark the Kotaku Australia homepage to visit whenever you need a news fix.

That’s about the sum of it. I’ve been doing this feature long enough — and these games have settled into such a comfortable holding pattern of strengths and weaknesses — that it’s in danger of growing repetitive, each year’s review only partially distinct from the one that came before. Which has long been my biggest criticism of not just these games themselves, but most of the media coverage of them as well. Wait, what is this?

We normally review one game at a time here at Kotaku, but when it comes to the year’s big football games, that changes. FIFA and PES are like Batman and the Joker: their strengths and weaknesses are defined by the competition, so it only makes sense to look at them together.

So while it’s tempting to spend pages here banging on about the specific ways in which PES 2018’s mastery of the actual sport of football (as it’s played) is unmatched, or just what it is about FIFA that makes it irresistible every year in spite of its glaring flaws, I’m just going to cut to the chase.

PES 2018 is the better game this year because it plays a better game of football. Sorry if that sounds predictable, since that’s been the case for the last few years, but it’s the case again in 2017. If you want my tl’dr verdict, that’s it.

Continual improvements to the series’ player animation, coupled with a nice sedate pace and almost perfect ball physics mean that a session with PES 2018 is as close as you can get to lacing up your boots and spending 90 minutes on an actual pitch without actually doing it.

All the things I love about football — its artistry, its capacity for individual expression, the fluidity with which top-level stars can play the game — can all be found in PES 2018. And they’re just better than they were last year. It plays so smoothly and so responsively that the quality of PES’ onfield action is enough to outweigh its serious shortcomings elsewhere, and just enough to put it past FIFA in my books.

FIFA 18, despite some improvements to its own animation (players respond to inputs a bit faster, still lags behind. It’s football as a Premier League executive wants you to experience it, all blood and thunder and sprints into the box and cracking top-corner finishes, which is fine, I just don’t have as much fun playing it because there’s not as much room for unique moments, that sensation that every goal you score is different. It also still feels a little too much like you’re controlling 11 wacky waving inflatable arm flailing tube men instead of human footballers.

I know die-hard FIFA fans will always buy FIFA, and PES fans will likewise buy PES regardless of what people like me say, but if you asked me to recommend one game to someone on the fence — or say I could only choose from one of them for myself — I’d recommend PES, because for all its problems (and we’ll get those in a minute if you feel like reading in more detail) it’s mastery of the actual sport puts it past FIFA’s mastery in terms of stuff like licenses and commentary. 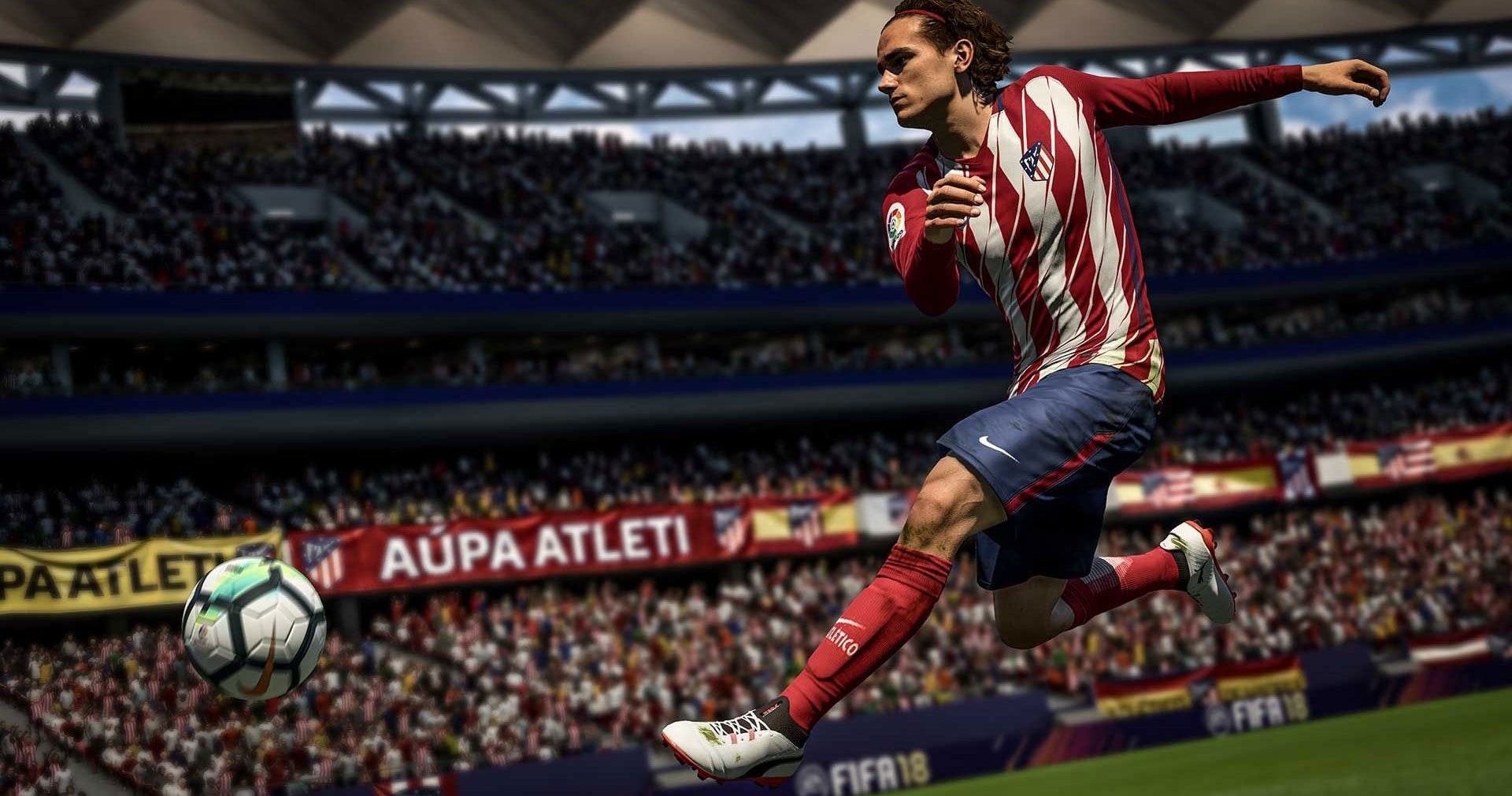 With that out of the way, there are still two things I want to talk about, one from PES, one from FIFA. They might influence which of the two games you prefer this year, but they will definitely make a difference in the future if 2017’s games are anything to go by. 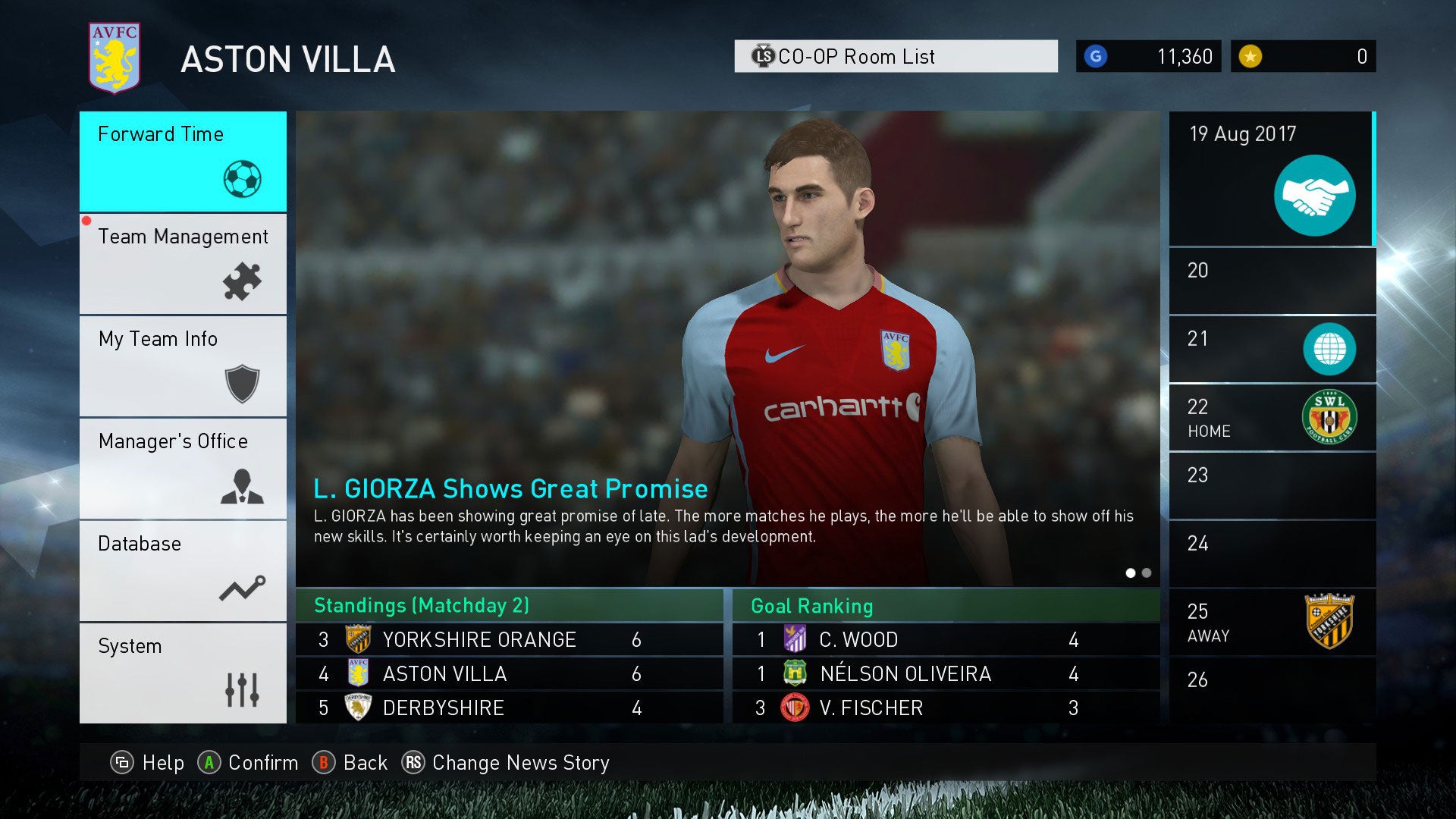 You could wake up from a ten-year coma and find your way around PES’ Master League.

It’s been true since the dawn of the rivalry between these two series that FIFA was always the prettier game. But as the years have dragged on, and EA has spent more time, effort and money on improving the presentation of their series, PES’ has barely moved in a decade.

Jumping between FIFA, with its lavish match intros, graphics and replay rendering, and landing in PES, with its lifeless characters and drab menus, feels like stepping back in time. Its on-field visuals are amazing, of that there’s no doubt, but serious players spend as much time off the pitch as they do on it, and to do so with PES2018 is to spend 10 minutes (on the field) on the PS4 followed by 10 minutes (in menus) on the PS2.

The gulf between the two games extends into the audio as well. FIFA’s duo of Martin Tyler and Alan Smith may recycle a few lines here and there, but for the most part they do a wonderful job of replicating the TV broadcast experience.

With PES, I’ve turned the commentary off. It’s abysmal. Silence is perferable to Peter Drury and Jim Beglin, whose charmless chatter is not only repetitive, but often wildly inaccurate as well. If PES makes one change next year, it needs to be either completely re-recording their lines, or going and finding someone else.

Things are so bad with PES that it makes recommending the series over FIFA to the average punter an increasingly tough sell for me. As someone who plays both games every year I’m in a position to indulge in the luxury of saying “well, PES plays better”, but if you’re a more casual football fan who only wants to have fun online and follow their favourite team/league (PES’ licensing is still a black hole), then I can understand why people might admit that FIFA is the worse game of football but still prefer it.

Konami aren’t just failing against FIFA, PES’ presentation is embarrassing by any standards for a sports game released in 2017. It needs to change.

THE JOURNEY IS INCREDIBLE

Alex Hunter’s singleplayer campaign last year had a showed a lot of promise in terms of structure, but its corny and predictable turns left me a little cold. So I came into FIFA 18 expecting much of the same. I ended up having my socks (and shinpads) blown clean off.

FIFA 18’s The Journey isn’t just a big improvement over last year’s effort, it’s now (partly thanks to NBA 2K’s own goal) the best singleplayer campaign in all of sports video games.

Without spoiling too much, it starts you out in England picking up where you left off after FIFA 17, only for events to soon transpire that have you whisked away overseas, where you run into some heavy personal shit (that’s handled in a surprisingly deft way) and play for a couple of new clubs along the way.

FIFA 18’s Journey is much brighter and chippier than FIFA 17’s subdued affair, with more frequent, smaller cutscenes that breathe life into the characters. It also finds a sweet spot between sitting the player down for some story and letting them get on with the game, something many of its competitors struggle with (2K interrupts you too often, while Madden’s Longshot didn’t have enough actual sports gameplay).

While you still play almost every game of the season — meaning this takes quite a while to work your way through — the changes in scenery, constant story updates and challenges the plot throws at you mean that it rarely feels like a grind.

The parts I most enjoyed, though, are when the story twice throws a big development at you, and instead of just playing it out via cinematics, actually drops you onto the pitch for unexpected and challenging scenarios.

Oh, and you also unlock everything, from skills to wardrobe changes, through playing the game, not by buying stuff, which is nice.

Alex Hunter is a likeable kid surrounded by a solid cast of characters who are right for the setting and tone, and the way The Journey played out this year has me more excited to see where he goes next than I am more fanciful and established video game stories.

I’d go so far as to say that even if you’re not that into these games, but enjoy sports and a good singleplayer video game, that FIFA 18 is worth it just to work your way through The Journey.

And that’s it for the 2017 instalment of FIFA v PES. PES wins again by a whisker thanks to its onfield supremacy, like it often does, but if it can’t improve things off the pitch — and if The Journey can keep improving like it has — then its days might not just be numbered in 2018, but in the years past that as well.