Physical contact has always been fairly limited in video games. In many games, your character can hit others with their hands, feet, or arm that’s also a sword, if you have one of those. In some, your character can flirt or have sex with other characters. In a handful, you can hold hands. I can hardly think of any, however, that treat touch as a means of support. I’ve been replaying Divinity: Original Sin 2 lately — I will probably just play this one game for the rest of my life, at this rate — in order to appreciate more of its little details. One thing that’s really stood out to me this time around is just how often the game hits me with dialogue prompts that involve light physical contact with other characters.

Sometimes, they’re overtly flirty, but a lot of the time it’s just about acknowledgement or, in what I think are the most subtly affecting moments, emotional support. 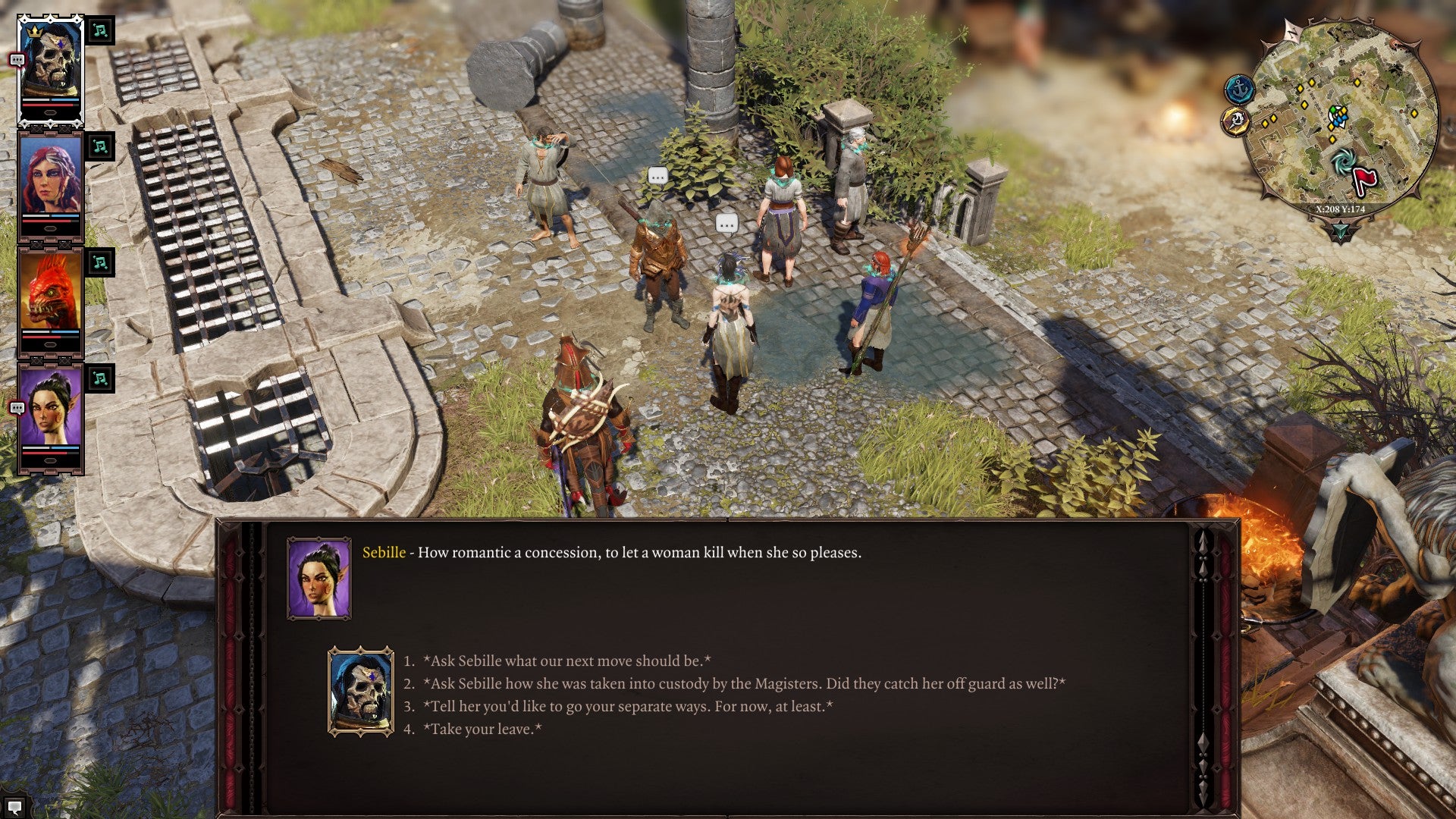 For example, if you have elven assassin Sebille in your party, you can end up learning that her memories of her true identity as the future backbone of elven society were stolen from her as a child.

Other elves make her relive those memories in order to regain them, and it’s a pretty traumatic experience. While she’s reliving them, you can try to halt the proceedings, do nothing, or put your hands on her shoulders to brace her for what’s coming.

The first time around I didn’t interfere, because Sebille can be kind of distant and prone to disemboweling people who piss her off. On this playthrough, I decided to support her by touching her.

In response, she offered uncharacteristically heartfelt gratitude. I was rewarded with a bunch of “attitude points,” which are, admittedly, an Extremely Video Games way of demonstrating an emotional bond. Still, it was a really nice moment that made me feel legitimately close to this character I’d previously found to be aloof and intimidating.

It makes the relationship between these characters feel less transactional and more like a legitimate, growing bond.

In another scene, a posh-bordering-on-pretentious party member named The Red Prince finally meets the love of his life. He’s seen her in magical dreams for literally his whole life, and then has her torn away from him in an instant after sort of also being betrayed by her.

After a big battle, I got to talk the situation through with him and, upon noting that he’s clearly been through a lot, was presented with the option to give him a big hug.

I didn’t have to hug him. Heck, I could’ve told him he was kind of a dumbass for jumping into the arms of somebody he’d never actually met. But if you do give him a hug, the game says that he embraces you too tightly and for a little too long. Despite a typical demeanour of regal cool, The Red Prince obviously needed that hug.

It’s a moment that reveals a softer side of The Red Prince’s character and underscores the journey you’ve been on so far. It makes the relationship between these characters feel less transactional and more like a legitimate, growing bond. 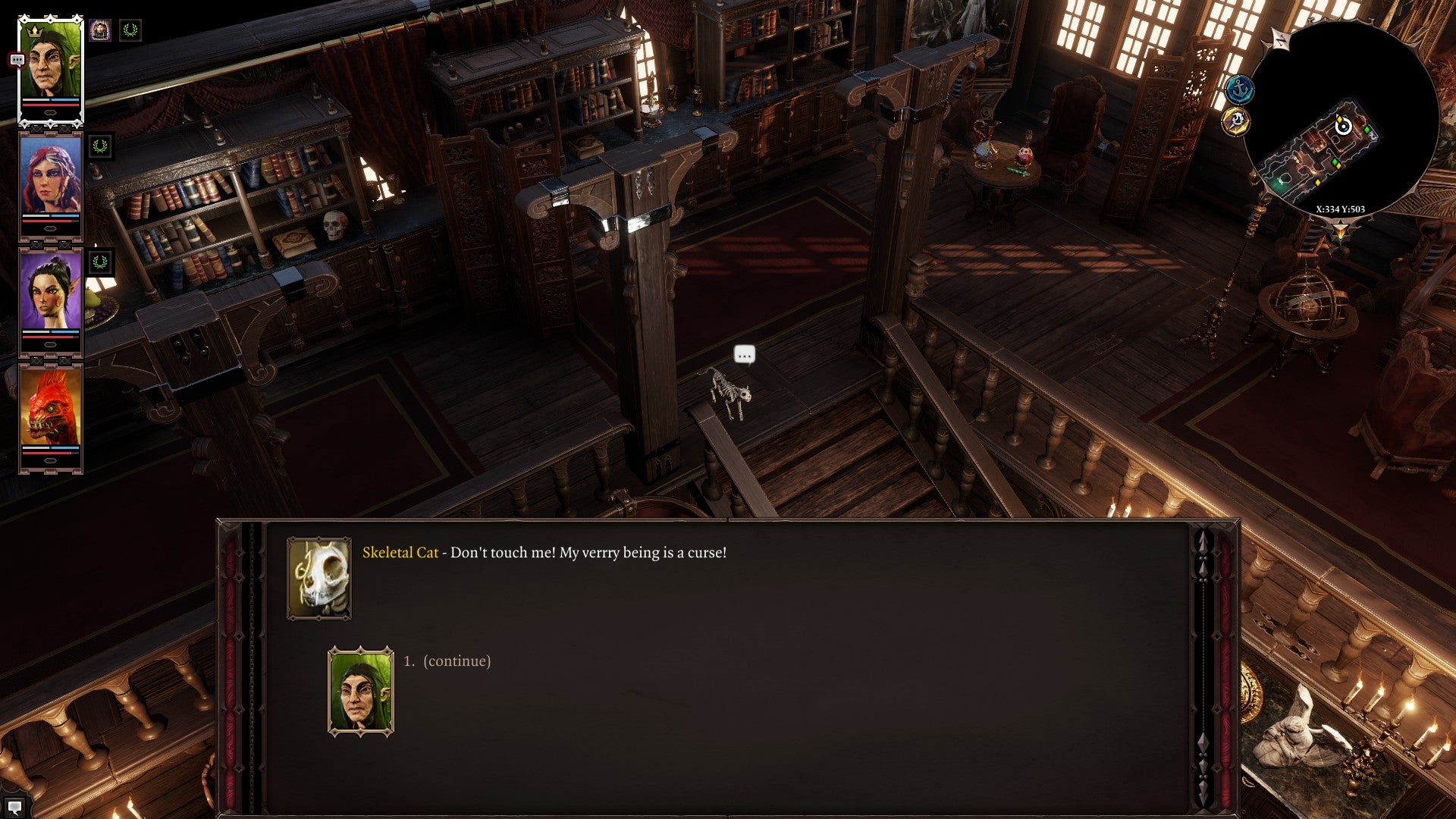 Unlike in games like The Witcher 3 or Mass Effect, where characters make physical contact in cut scenes, or Ico, where holding hands is a full-blown mechanic, Original Sin 2 turns it into a consideration that the player has agency over in many dialogues.

It’s an additional dimension of communication, something you have to think about and deploy when it feels appropriate to you. It reveals things about other characters and gives the character you’re role-playing more depth as well.

I’d wager that part of the reason you don’t see these sorts of interactions in many other games is that preventing people from clipping into each other is a problem that only god has solved thus far. Original Sin 2, on the other hand, has the advantage of being able to just describe physical interactions with words.

Still, I do hope other games start prioritising this form of touch in addition to the kind that involves punching/kicking/sword-arming people in the head.

In Original Sin 2, touching characters isn’t always a good idea. I gently put my hand on the cheek of an NPC who seemed to be hurting, and they slapped it away. I tried to pet a dog once, and it bit me. I also tried to pet a reanimated skeleton kitty, and it howled in shame of its bony body.

In hindsight, I should have read their cues better. In Original Sin 2, as in the real world, physical contact can be a scary prospect, and you have to learn when it’s appropriate.

But sorting through this stuff, especially as somebody who struggles to navigate it in my own life, is a process, and I appreciate that Original Sin 2 turns it into a key element of communication and lets me experiment with it.