Intel’s Coffee Lake Core i7 CPUs: A Fast Mix Of Old And New

Intel has launched the latest series of its 8th generation Core processors. The CPUs, designed for use in desktop PCs, are fast and relatively affordable — and they’re probably going to leave you very confused.

That’s because Intel’s 8th Generation is a confusing Frankenstein-like monster. Normally the entire generation of a new family of processors is based on a single microarchitecture. Which means improvements in performance tend to be universal — but not Intel’s 8th generation!

So even as AMD wows with their super fast, super cheap Ryzen processors, Intel is slowly rolling out an 8th Gen that’s a mix of microarchitectures both old and new.

The mobile version of the 8th Gen is called Kaby Lake R, and is a refinement of last year’s Kaby Lake processor.

Future 8th Gen processors are rumoured to be based on Cannonlake, a microarchitecture that was expected back in 2016 and delayed until early next year at the earliest.

Yet the processors launching now (and available in pre-built desktops later this month) enjoy big speed improvements because they’re based on Coffee Lake, a microarchitecture that was originally supposed to exist between Kaby Lake and Cannonlake, not alongside them.

For those who like to count cores and clock speeds, here’s how this new hardware measures up with the older stuff: The speed improvements in this new 14nm CPU microarchitecture come courtesy of the two additional cores it manages to pack inside.

How Fast Are They?

When you start counting cores like that clock speeds start to matter a little less. Clock speeds maxed out nearly a decade ago, forcing processor makers to focus on adding more cores for better performance.

Two 2.4GHz cores doing computational calculations will accomplish them faster than a single 3GHz core. Now what matters are the results. To that end I pitted the i7-8700K and i5-8600K against their 7th Generation counterparts, and because I had a comparably priced 8-core AMD Ryzen 7 1800X laying around I tested it, too.

Same hard drives, same video cards, and same RAM. The only big difference was the processor and the motherboards. The Ryzen was tested on an mobo with a Ryzen socket, while the 7th Generation Intel processors were tested on a 270 chipset introduced back in January, and the 8th Generation was tested on the new 370 required to take advantage of the speed churned out by those additional cores.

In the majority of tests the 8th Gen processors smoked everything else. But don’t take my word for it. Let’s look at some sweet, sweet graphs.

First up is WebXPRT, a synthetic benchmark that tests traditional browser functions, like crunching numbers in online spreadsheets and resizing photos. Here the additional two cores clearly gave the 8th Generation processors a leg up and everything that’s come earlier this year, by accomplishing every task WebXPRT threw at them faster than anything else. 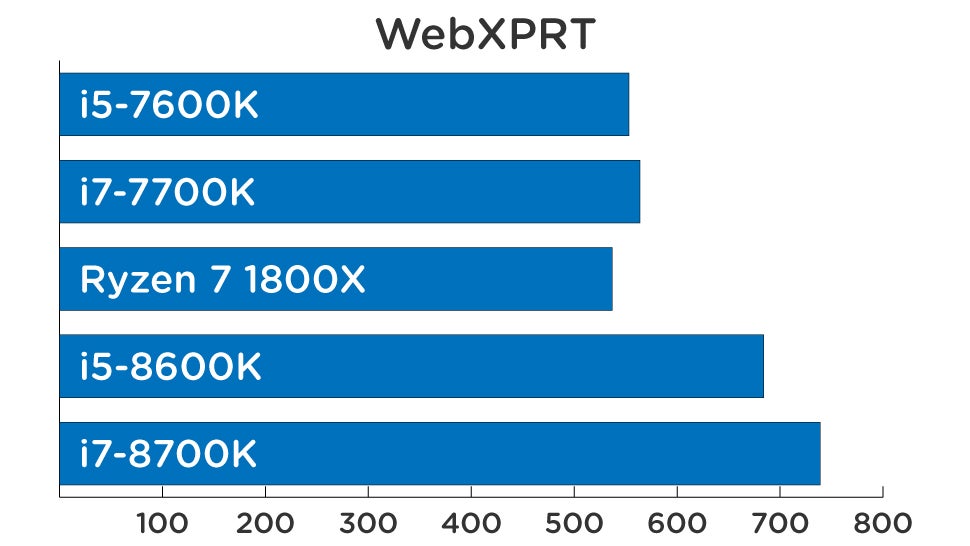 The higher the WebXPRT score, the better.

The 8th Generation processors also did really well in the other synthetic benchmark I used, Geekbench 4. Synthetic benchmarks don’t always replciate real world results, but they’re great if you want to have pissing contests about numbers, and Geekbench, which works on nearly every operating system except Chrome OS, does a fine job of crunching numbers to give a number that might represent the performance of a processor. 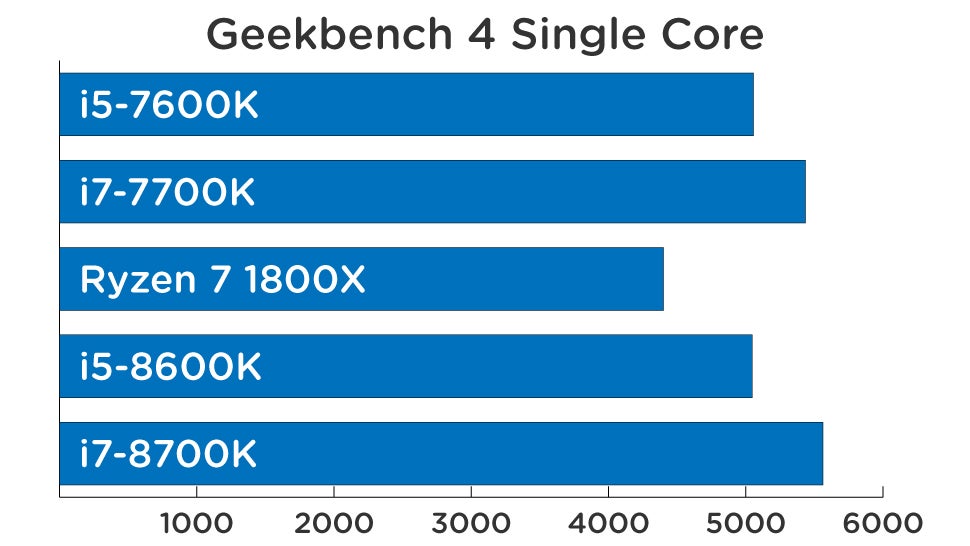 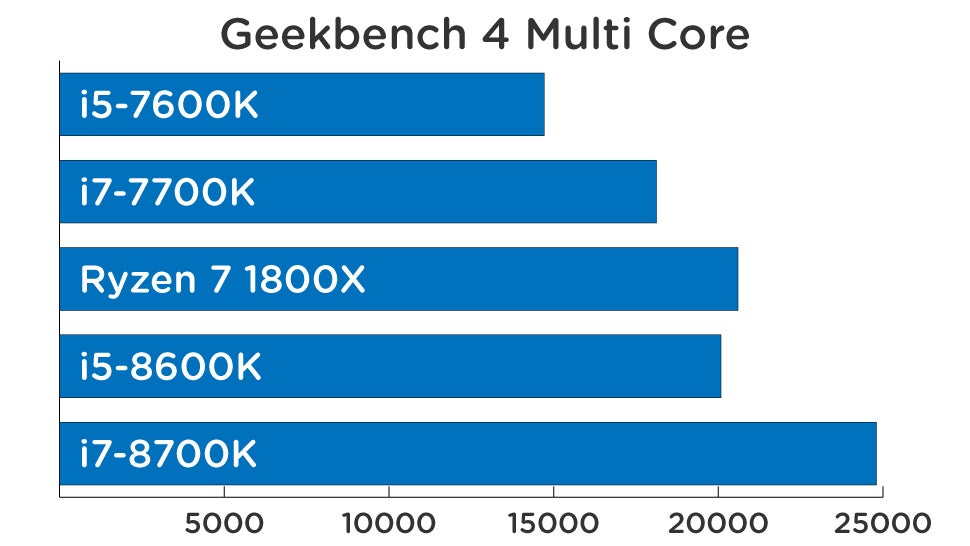 Where these 8th Generation processors really shine isn’t in synthetic benchmarks, but in real world ones — like Photoshop. Many of us use Photoshop, or a comparable photo editor, at some point in our lives. To test each CPU I processed a big batch of RAW files, resizing and saving them to the hard drive.

Here the improvements were just in seconds, and scant seconds at that, but if you process a lot of images, saving a few seconds could add up to hours of time. 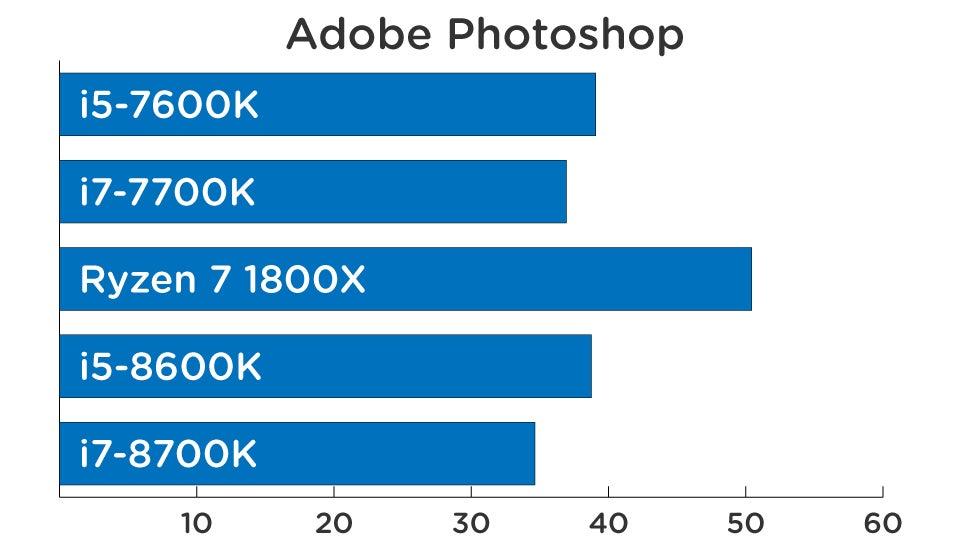 In the Civilisation VI AI test, which times how long the game’s AI takes to process a turn, the 8th Generation i5 and i7 were the first consumer-grade processors that accomplished the turn in under 20 seconds. The i5-8600K did it in 18.32 seconds and the i7-8700K did it in 17.18 seconds. 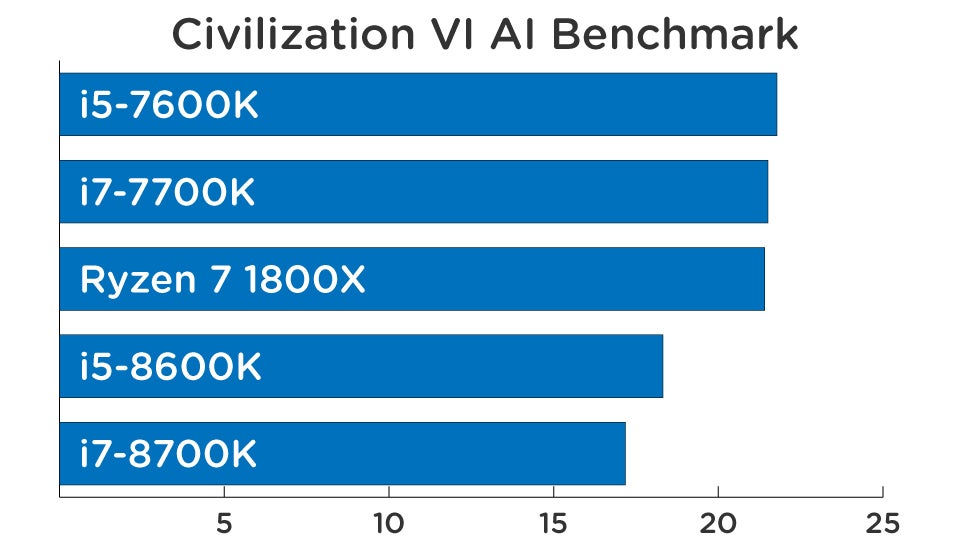 The Civ VI AI benchmark measures how long a turn takes in seconds. Faster is better.

The 8th Generation processors didn’t fare quite as well when testing Rise of the Tomb Raider in 4K resolution. That’s to be expected though, as GPU tends to matter more than CPU, but there were still marginal improvements compared to the 7th Generation, with the 8th Gen processors squeezing out 3 whole more frames per second.

Yet if you’re an Intel fan you’ll be disappointed, the Ryzen 7 still managed twice the frames per second of every Intel processor. 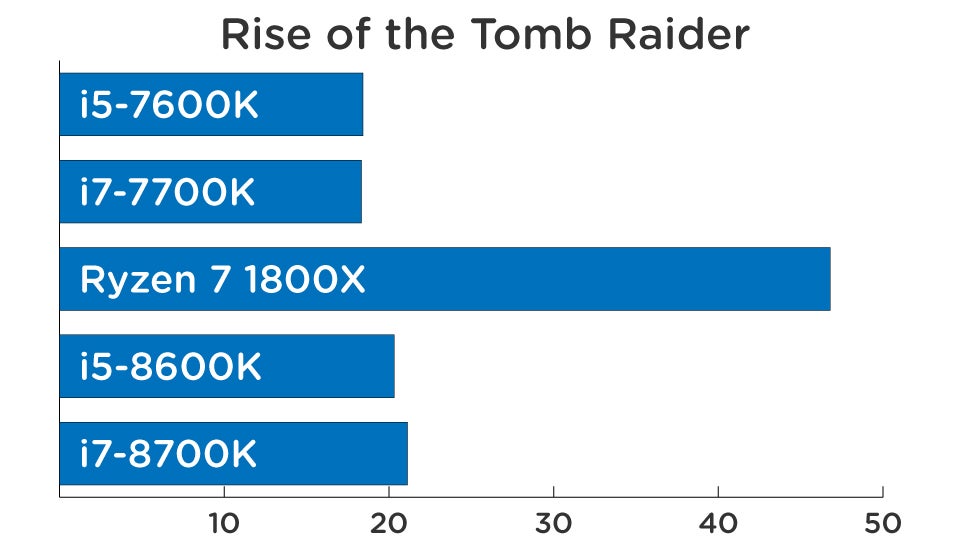 The Ryzen processor, with its two additional cores, also continues to be the champ when rendering 3D images in Blender or re-encoding video files in Handbrake. In both cases it was leagues faster than anything Intel could do. But the Ryzen 7 1800X is meant to be a workhorse processor comparable to Intel’s $US1,000-plus “high end desktop” CPUs that go into big workstations at professional graphics and editing houses. 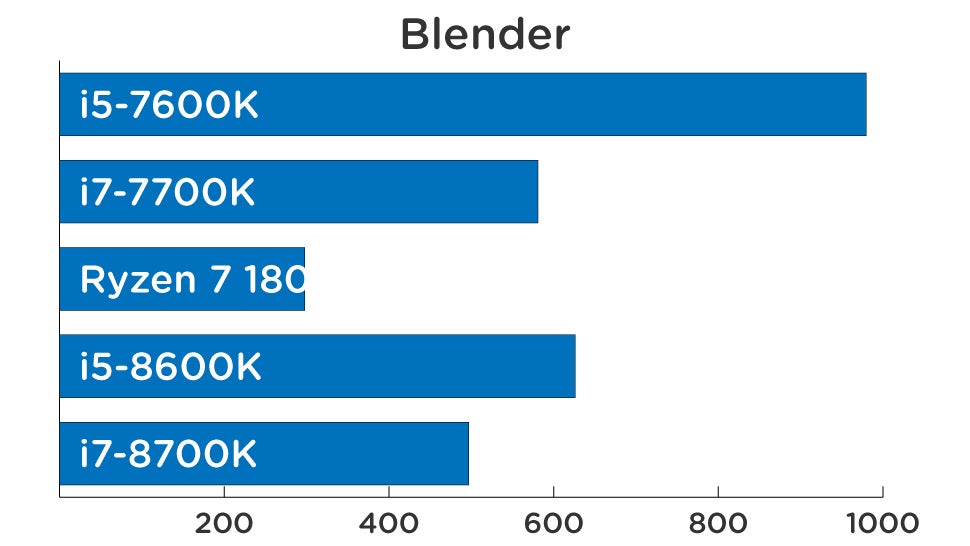 What’s impressive is how much the gap is closing. Look at this graph for how quickly a 4K video file was converted in Handbrake and note how close the i7-8700K is getting to the Ryzen CPU. They’re practically neck and neck! 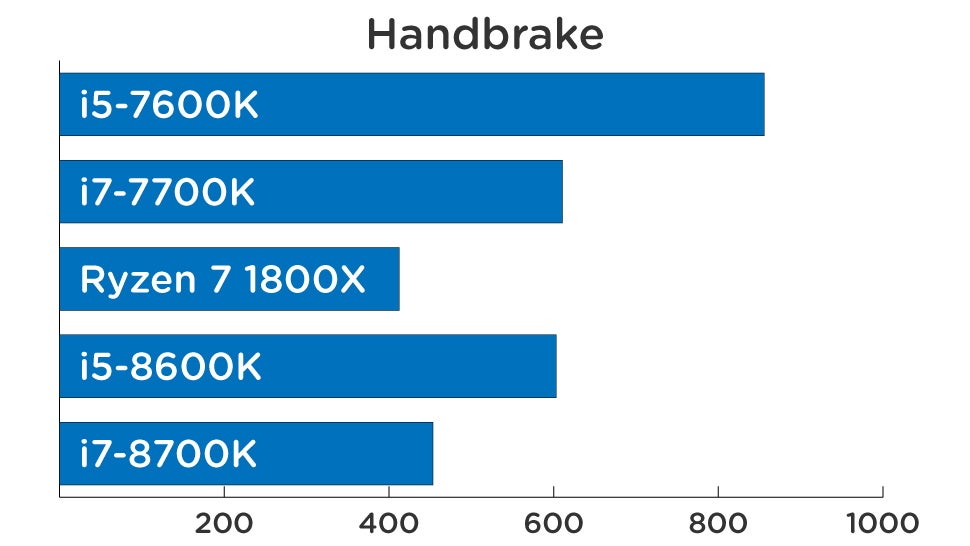 How quickly a video file is converted in Handbrake. Faster is better.

So there remains one big honking question.

Are They Worth It?

This is a question I keep mulling over. If you’re building a brand new PC and investing in a new motherboard then the 8th Generation Intel Coffee Lake processors are worth a look. Particularly if you game or spend a lot of time in an app like Photoshop. These processors give a healthy boost of speed.

But if you just upgraded than you’re going to be very very disappointed. Remember how I mentioned these processors were tested on a 370 chipset while the 7th Generation Intel processors were tested on a motherboard with a 270 chipset? That’s because even though these two generations were released just eight months apart, the new generation requires a whole new chipset in order to take advantage of its speed. That’s a painful proposition if you’re like me and just built a computer based on the 270 chipset back in January.

It’s also a departure from Intel’s traditional timeframe. The predecessor of the 270 and 370, the 170, was launched way back in the summer of 2015! We went from nearly two years between new motherboards to less than one year. And if you’re going to have to buy a whole new motherboard just to appreciate your new Intel processor than why should you go Intel at all?

AMD’s Ryzen 7 processor needs a whole new motherboard, too and it’s way faster than what Intel’s offering when it comes to professional processes like video editing.

In Intel’s bid to beat AMD, it’s ended up cannibalising itself, and the cannibalisation will continue as this 8th Generation, based on a chimera of microarchitectures, continues to launch over the next six months. Why buy now when I can just wait. Intel is right to focus on speed as a way of outdoing AMD, but escalating the release time table is not. Sometimes a lot of processor is too much processor.