Wolfenstein 2: The New Colossus opens with a nightmare. This deep descent into BJ Blazkowicz’ personal hell highlights the personal costs of violence in the home and shows how oppression and hate repeat themselves.

At the end of Wolfenstein: The New Order, protagonist BJ Blazkowicz is at the brink of death. The sequel picks this moment back up, opening with BJ bleeding out and slipping towards oblivion.

His mind drifts towards a past that is just as monstrous as the Nazi-conquered present. But Blazkowicz doesn’t find Heaven waiting for him; he finds evil.

“Oh no, Mother, I’m going to Hell,” he intones as the world turns dark.

BJ Blazkowicz’ idea of Hell has very little to do with Nazis, instead focusing on the domestic violence he and his mother suffered before the war began.

BJ’s father discovers that his son has a crush on a black girl and storms into his son’s room, launching into a racist tirade.

BJ hides in his closet, peeking through the slitted door as his mother tries to protect him. His mother, a Jewish woman, stands against his father’s anti-Semitic rantings before she is struck. The player, as Blazkowicz, is chased around the room and choked.

The player can delay this by tosses objects but they will be caught eventually. In the next scene, his father ties him up, places a shotgun in his hand, and orders him to shoot the family dog. If the player intentionally misses, BJ’s father does the deed himself.

This act of intense violence stands side by side with a scene from the first game in which BJ must decide which of his two squadmates the evil Nazi doctor Deathshead will torture and kill for his experiments.

The juxtaposition is clear. BJ’s domestic abuse and the depravity of Nazi violence are manifestations of the same insidious ideologies.

Racism and bigotry can create broken homes as well as battlefields. It’s important that we witness this violence in detail, although The New Colossus‘ depiction might come off as shock value as much as a thematic exploration.

The cruelty BJ suffered at the hands of his father is reflected in General Engel’s emotional abuse of her daughter Sigrun. 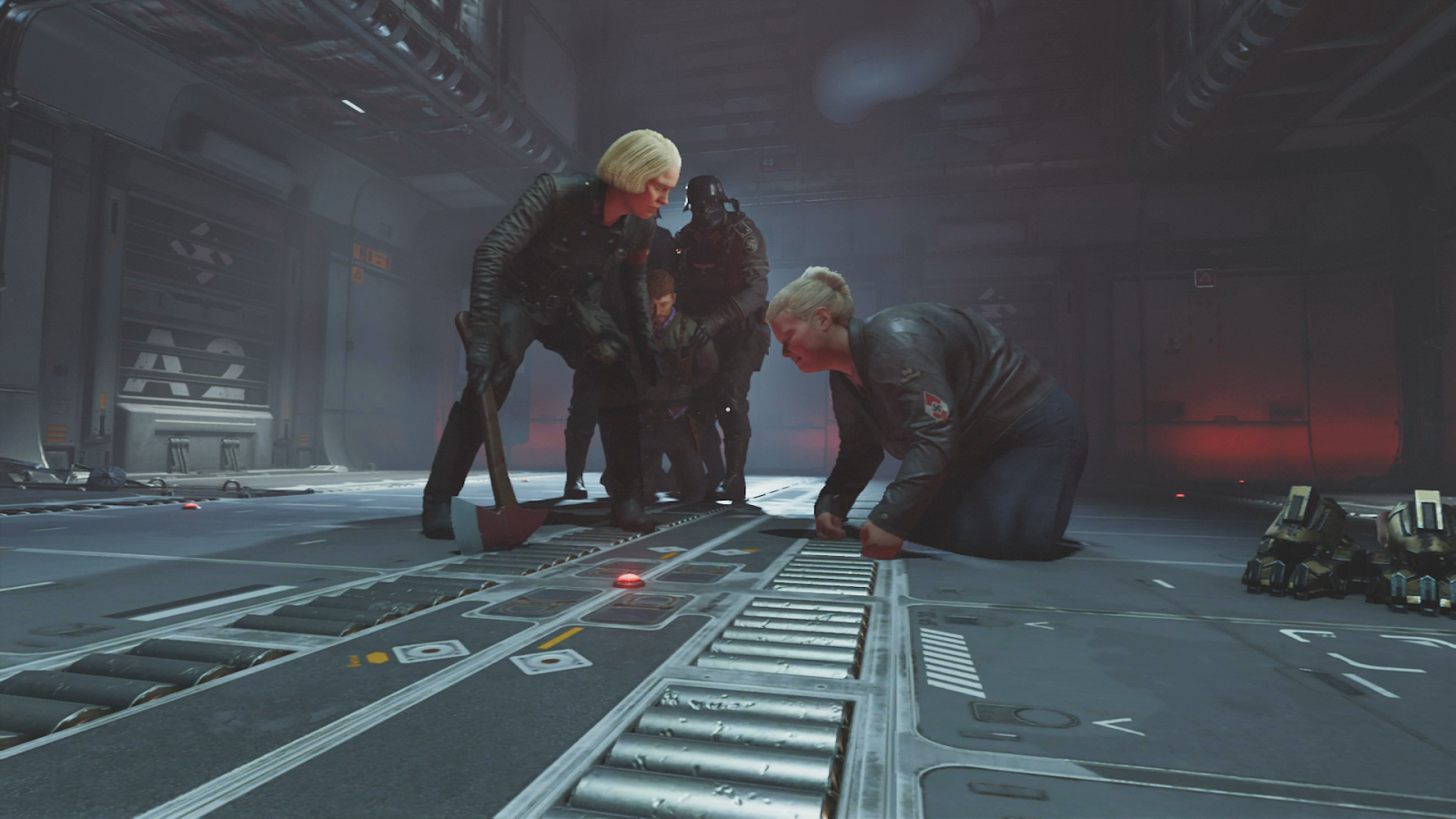 At the end of the first level, BJ is captured alongside resistance leader Caroline Becker. Just as his father put a shotgun in his hands, Engel forces Sigrun to take up an axe and insists her daughter kill Becker.

For Engel, Becker is no better than a dog. Engel mocks Sigrun’s weight and threatens to report her for things she’s written in her diary.

It’s the same pattern of abuse that snaked into the Blazkowicz household. Sigrun cannot kill Caroline just as players might have avoided shooting BJ’s dog. Engel does the deed instead. The cycle of violence repeats.

The New Colossus reveals an underlying tension in these moments. It wants to show violence as personal while also allowing the player to blast down Nazis and hack them to pieces with a hatchet.

BJ stalks around with his own axe, slicing off limbs and putting down his own animals. This might seem hypocritical, as the game both condemns violence and revels in allowing the player to slaughter enemies.

But by presenting violence as a lasting force that can manifest anywhere, The New Colossus highlights the necessity of disrupting that violence through any means. The brutality demands response. 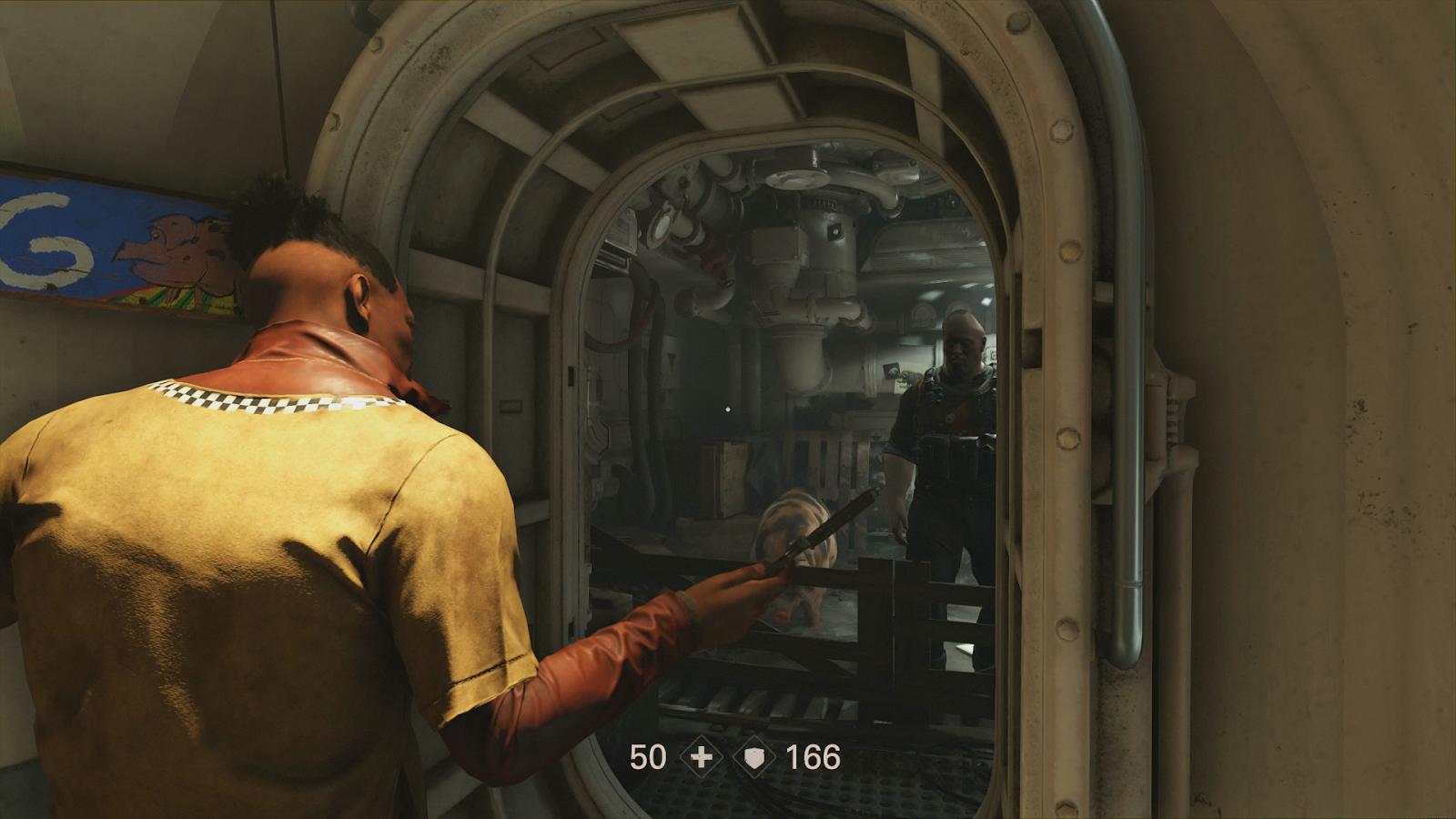 Later on, The New Colossus shows a different path. As the resistance’s supplies dwindle, players encounter a scene between Bombate and Max Haas.

Max suffered brain damage as a child; he is a kind soul with a childlike disposition. Bombate asks him to kill a pig for food. He attempts to reason with Max but stops when Max grows upset about the task.

Unlike BJ’s father or General Engel, he does not force Max to participate in violence. There is no bloodshed. The New Colossus might focus on cruelty, but its world is not completely defined by it.

Compassion can win, even if those victories come in small moments.

I will have a full review of The New Colossus early this week.