What We Liked (And Didn't Like) About Stranger Things Season Two

Stranger Things came back last week with a second season. Gita sat down with Compete's Maddy Myers and Kotaku social media manager Alex Bedder to chat about Ghostbuster Halloween costumes, punk rockers and the perfection that is Joyce Byers.

Gita Jackson: This weekend heralded the return of Netflix's hit show Stranger Things. I thought maybe I'd watch an episode or two and then dole it out, but no, I watched it all. Were either of you any better?

Maddy Myers: I, too, did not plan to watch the entire thing in one weekend. And yet... here we are.

Alex Bedder: I started it on Friday evening thinking I would indulge in a healthy, productive way ... that didn't happen. On Saturday night I was up until 5 am, because I finished episode six, and then there was that bottle episode ... and then you're on the the second to last one so WHY NOT.

Gita: Honestly I think this season was better — and more bingeable — than the last. So much shit happens! All our protagonists are mad at each other! Samwise Gamgee is there!

Alex: Oh. Poor Bob. It was WILD to see Rudy and Veronica dating. Or maybe Mikey and Lydia is more appropriate.

Gita: It fucked me up. As much as this show is a pastiche of shit from the 80s I didn't think it was gonna be that deep. That said, this season seemed way less like a checklist of things you remember from the 80s and more of an attempt to actually engage with the themes in new ways.

Alex: Definitely. I feel like this season had a lot more to say about trauma and how we deal with it.

Maddy: Yeah. It definitely reminded me of how much media in the 80s was about the newly-invented term "PTSD," society's reaction to Vietnam, and the ongoing conversations about trauma and how we talk about it and process it.

That might also be because I just coincidentally watched The Thing last week, so I had that on my mind a lot. Dogs with exploding heads! And post-Vietnam PTSD themes!

Sidebar, Dustin leaning hard on the "demo-dogs" joke is probably the only comedic moment in Stranger Things that didn't work for me. But he made it up to me with that adorable hairstyle at the end.

Gita: I have so many thoughts about Dustin. For instance: when did he start being such an absolute moron?

Maddy: Yeah, I had a lot of trouble relating to the plotline where Dustin suddenly didn't trust his friends. Which I guess also brings me to Max's existence, which also didn't wow me.

I swear I actually did like this season, but there were some moments when the tension in the "party" felt manufactured by narrative cliches that are, well, classic for '80s media, right? Like Dustin having his Gremlins-esque plotline with Dart, and also, the entire group of boys losing their minds over the idea of having another girl in their immediate vicinity.

Alex: I thought it was to shake up the dynamics. Season one Lucas was kind of the wet blanket of the group in terms of his reaction to Eleven, so it was nice to see him forge this relationship with Max and have Dustin instead be a point of contention.

Maddy: Yeah, it was cool to see more of Lucas' personality this season, although as a result, I ended up liking him a lot more than Dustin. I don't know if that was supposed to happen. I think maybe I was supposed to be rooting for both of them?

Gita: Yeah, Alex, I agree. Max as a character is too much of a "gamer girl" cliche for me to ever really like, but I did like how it gave Lucas something to do. And we finally got to see his family, too!

Alex: HIS SISTER IS AN ICON.

Alex: There's another show here just about the sisters. I was bummed that the youngest Wheeler got zero screen time.

Maddy: Those Ghostbusters photo shoots — that entire montage was so wonderful. It was total pandering, and I grinned through all of it. Erica saying "nerd" to the camera is also addressing me, personally, for grinning at those scenes so much

Alex: There was a ton of meta commentary about criticisms of the show! When Lucas fills Max in on everything, I believe she calls it derivative?

Maddy: Yeah. I've seen a lot of fans talking about how they don't understand why Max and Billy were added to the cast, but I think that's precisely why. We needed a couple of outsiders to show up and be judgmental and force the main cast out of their insular bubble.

Speaking of which, we need to talk about Billy, the racist bully, who also appears to be wearing lipstick and mascara in most of his scenes? There's so much going on with Billy. We could have a whole talk about just the intense reactions the world has had to Billy.

Alex: I wasn't really feeling Billy until the last few episodes, when we got the scene with his dad that establishes the cycle of abuse in the house as well as him hitting on Mrs. Wheeler. Which was unfortunately the only thing Cara Buono got to do all season.

Gita: That scene with Mrs. Wheeler is so much. 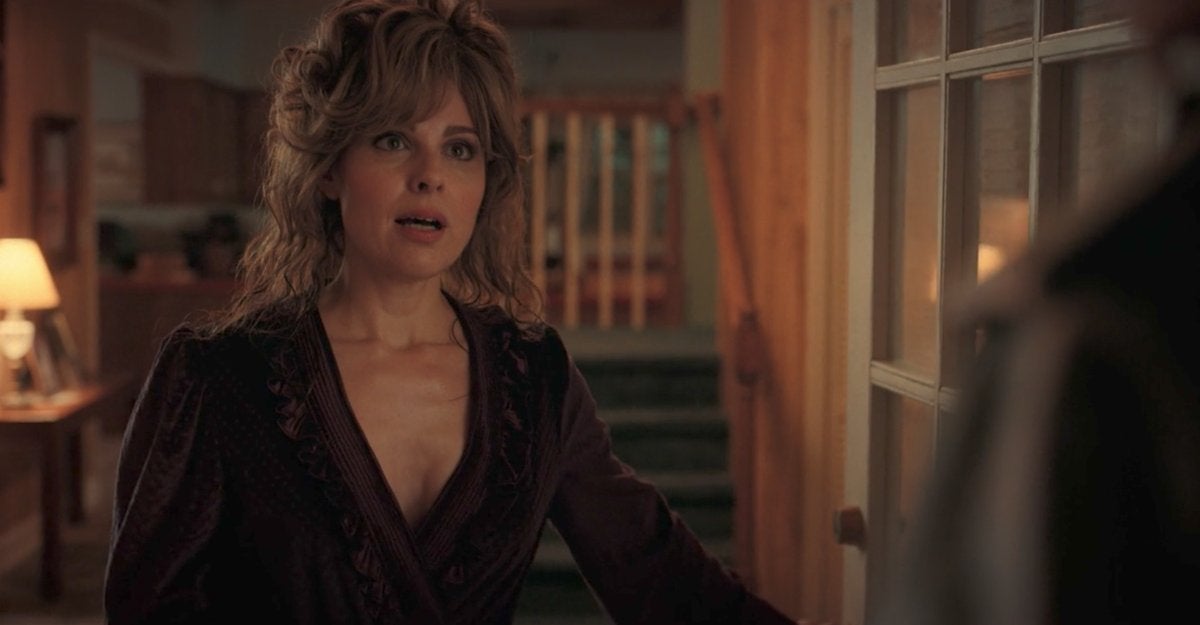 Alex: I was very down for that Riverdale moment. Or Teen Wolf. Whichever teen, gothic horror-adjacent show with homosexual undertones.

Maddy: By the way, according to Netflix's social media manager, Billy/Steve is an accepted ship. This season got real friggin' heterosexual, also. It was like, Parks and Rec season finale levels of ensuring every character had a straight mate by the last episode.

Alex: Right?! You know what would be a stranger thing? Some queer characters.

Maddy: Billy and Steve's tension undercuts some of that, and yeah, I ship it, but it's still an undeniable "flamboyant villain" / predatory closeted gay guy type of trope. And, these days... I don't know. It wasn't super fun to think that one through. Also, again, Billy is racist because there's just no other way to read those scenes with Lucas. At least not that I can find.

Alex: Also, I still read Will as gay. I know that was a throwaway plot point in season one with his dad commenting on him being sensitive.

Gita: Oh I am right there with you.

Gita: I have to say that I did absolutely want Jonathan and Nancy to finally fuck and I'm glad they did. But otherwise: yeah, it was a very hetero season.

Maddy: That scene when the journalist dresses them both down at the dinner table was very satisfying!

Gita: "You got the real shit: shared trauma."

Maddy: I feel like Stranger Things wants to navigate the idea of white male nerds getting their masculinity policed at school, and bullying and being "different," but it always seems to shy away from going there?

And it's like, come on. It's not actually the 80s anymore. You can just say the thing. I've seen a lot of queer reads of Eleven, too. It was pretty fun to see her take on a punk rock androgynous vibe this time around. Those outfits on Kali's gang!

Alex: OK, Kali's gang. I have to say, I did not love episode seven, and I think it kind of doesn't work as a bottle episode.

Maddy: Fun fact: Kali's character name was originally "Roman," and it was a casting call for any gender/ethnicity. So they probably changed it after casting, which... shrug emoji.

Alex: But, her gang was the quintessential 80s collection of punk outcasts. Like right out of Return of the Living Dead.

Gita: I loved her look, and Kali's actress was doing a lot with a little. But that episode was the most Stranger Things season one thing in the whole season. Cramming a lot of references in without a lot of cohesion.

Alex: It felt like a weird backdoor pilot. But I am excited by the prospect of learning more about numbers One to Ten. Maybe even a Scanners psychics hunting psychics plot in the future. Like, wouldn't it be awesome if a few of them still work for the shadowy government agency and are at odds with Eleven and Eight?

Maddy: Yeah. The only read I have on their presence in the season isn't that ideal, either, which is that the show introduces us to these homeless, wayward, diverse teens and then tells us that they're "too violent" for the sweet young ingenue.

It's like, El gets to experiment with being part of this gang, but ultimately she gets to return to the small town and go to the school dance and have her Pretty In Pink ending. She doesn't stay on the other side of the tracks.

I do like that the idea of a third season (or more) doesn't feel forced to me. It does actually feel like there's more story here to explore. I mean, I obviously have some complaints, but they're more about the narrative devices and tropes in play, not the overall concept of the show, which I still clearly enjoy enough to mainline the entire second series in two days.

Gita: Yeah, although there wasn't an obvious sequel hook, I do think there are places for this story to go for another season. Obviously, the prospect of El living a normal life in Hawkins will give us some cool fish out of water comedy moments.

Alex: A town without Eggos.

Maddy: Before we wrap up, I just want to say that I love Joyce so much on this show. She's like the perfect emotional center. Her role really makes the show work. I've felt that way about both seasons so far.

Maddy: It's pretty cool to see a show that is just unabashedly about a mum.

Alex: I love how Joyce doubled down in all the best ways this season. I need a GIF of her saying "I WANT to kill it." She went from Ripley in Alien to Ripley in Aliens with those space heaters.

I just wanted to say that I really, really got a kick out of Paul Riser watching soldiers via shaky camera footage and on radar getting killed by a bunch of creatures we only saw ONE of in season one. You fully expect Stranger Things to do the whole THIS IS A REFERENCE bit, but it's still so fun to be like, oh they are doing Aliens WITH Paul Reiser. Very cute.

Gita: I felt so bad about Bob dying because I'm not convinced that Hopper is actually what she needs in her life. Like, Bob was doing pretty great.

Alex: Yeah, not into Joyce and Hopper and never have been. I was really into Bob, but I knew that was donzo from the moment he volunteered to play hero.

Maddy: I don't want to see Joyce and Hopper dating. I like them as sort of a Max/Furiosa platonic parental partnership at the end of the world. I loved Bob, but I felt like he was marked for death the entire time. This isn't a show where people get to be happy for very long.

Gita: I guess that's why everyone has PTSD.