featuremafiaresistanceResistance: Avalontabletoptabletop gamingThe Resistancewerewolf
Image: Playwerewolf.co
To sign up for our daily newsletter covering the latest news, features and reviews, head HERE. For a running feed of all our stories, follow us on Twitter HERE. Or you can bookmark the Kotaku Australia homepage to visit whenever you need a news fix.

This story originally appeared in March 2017.

Gaming in large groups is hard. Most sensible board games are best with 3-5 players. But sometimes you want to invite more than three people over for games. Then you look around the room at your 6+ friends, and think, should we play one big game, or split into two? And then someone’s partner volunteers, “well, maybe I can just watch.” And you’re tempted, but because you’ve played D&D, you know that splitting the party is always a bad idea.

This is the point in the evening where a certain friend–you know the one–invariably suggests playing Werewolf. (Or Werewolf‘s older, also-fatally-flawed brother, Mafia.)

Y’know the game. A few people are secretly elected to be werewolves (or mafioso) and at night, they’ll kill innocent villagers. The village then “wakes up”, argue furiously, “lynch” someone who may or may not be a werewolf. and then go back to sleep. The next morning they await to find another dead werewolf victim. Rinse and repeat until one side is dead.

At the beginning of the night, it always sounds like a good idea. At the end of the night, I remember why I hate Mafia. And Werewolf. Which is when I resolve: I’m never playing this damn game again.

Let’s start with the positives. Hidden identity games are fun. Really fun. Sometimes when I play board games, I love the brain-burning, puzzle-solving aspect of a game. But I always love the psychological aspect of playing against other players. Subtlety and mind-games, feints and misdirection, bluffing and blustering and convincing. Untangling the web of trust and lies and confusion.

There’s even something to the feeling of helplessness when you see the situation falling apart and you can’t do anything to stop it. It’s like watching one of those beautifully-shot, depressingly-sad French movies where the beautiful, buxom, but tragically flawed heroine meets her inevitable and inexorable doom. If it was real life, it would be tragic, but in a game, it’s captivating. 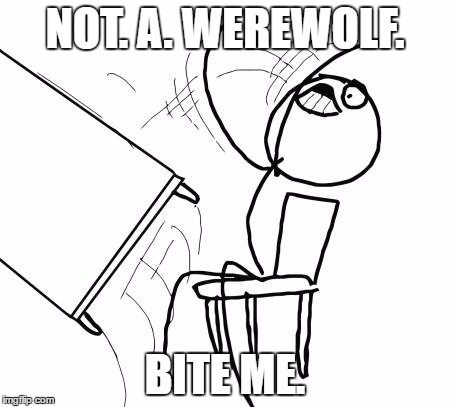 We’ve talked about player elimination before. I’ll grant that dying and watching people argue about their lycanthropy (or lack thereof) is moderately more amusing than watching people roll dice and move top hats around the board, but personally, I’d always prefer to be playing than sitting on the sidelines. Indeed, by design, the game forbids you from giving clues to the living, thus preventing the snide commentary and undead in-jokes that might otherwise keep the poor, hapless victims entertained. In the modern era, no player need sit on the sidelines for fifty-five minutes of an hour-long game. Player elimination is still a pox on the gaming world.

My friends, The Resistance. Resistance fighters need guns to go on missions, of course.

In a clasically dystopian future, we are a cell of resistance fighters, trying to take down an evil and corrupt government. If we can carry out three successful missions, the resistance wins. (Viva la revolucion!) The catch: there are spies hidden amongst us. If they go on missions, they are able to sabotage the mission. So each turn we vote for a team to go on the mission, trying not to send spies. Inevitably time runs out and we need to send an unknown team into the void, into a mission that will succeed or fail. Three failed missions will mean the inevitable destruction of the resistance, and victory for the spies. Boo!

Designed by Don Eskridge, Resistance keeps all the juicy subterfuge, deduction and betrayal of Werewolf. However it removes the player-elimination, because every player continues to be a voting member of our resistance cell. In addition, no-one’s identity is ever disclosed. I’ve played games where I’ve known that the person on my right is a spy, only to realise on the fifth and final turn that I had made a wrong deduction the entire game, and he was actually a loyal resistance member.

Adding missions (and voting for missions) also gives you an entire other set of data from which to draw your (often incorrect) conclusions. But this then becomes another way that a clever spy can misdirect and double-bluff you! One Fail means an unsuccessful mission 🙁

The Resistance: Avalon re-themes the game into Arthurian legend. The mission are quests for the Holy Grail, and the spies become minions of Mordred. In terms of game mechanics, instead of using special cards, players gain secret identities. The resistance (i.e. Arthur) gains Merlin, who through his magic knows the identity of the spies. But the spies gain The Assassin, and an alternate path to victory: they get to assassinate one player at the end of the game, and they win if they successfully assassinate Merlin. To make things easier for the Resistance, you might add Percival, who knows the identity of Merlin and can act as a bodyguard.

To make things harder for the Resistance, you might add Morgana, who, to Percival, looks like Merlin (so he sees two magic users, and must decide who he trusts). To add more chaos, you might add Oberon (a “deep spy”, who is unknown to the other spies), or Lancelot (who can switch sides). For many fans, Resistance: Avalon is the ideal version of the game. Eventually, loving the mechanics but disliking the theme, Avalon was re-themed into The Resistance: Hidden Agenda (pictured). Resistance: Hostile Intent was released in 2014 and adds a different set of mechanics that makes the game more adversarial. Both resistance and spies have a Chief and a Seeker. In order to successfully win, either side must win three missions AND successfully identify the other side’s chief. If they do so unsuccessfully, the result of the last mission is reversed, and the game continues.

I road tested this on Friday night. After work, we played a couple of party games. We played a game of Werewolf, because, y’know, sometimes you need to take the hits for the team. Then we played the Resistance. For those new to the Resistance, all of them could clearly see that it was a better game than Werewolf.

It’s a game that stands up to lots of replay. I was part of a large gaming group that met almost every Tuesday night. After playing our hardcore game for the night, we would then sit down and play 2-3 games of Resistance (normally Avalon) every night. Over the course of two years, many of us easily racked up 100+ plays. And it still kept us coming back. The only thing that stopped it was a change of venues that booted us out at a respectable time of night.