When I first reviewed Crusader Kings II in 2012, I called it “one of the most challenging, entertaining and rewarding strategy games [I’ve] ever played.” Five years later, it turns out that was only the beginning of my long journey with the game.

Crusader Kings II is a grand strategy game from Paradox Interactive. The “grand” part of that label is well-deserved; like its labelmates Europa Universalis and Hearts of Iron, CKII is a game whose complexity is matched only by the number of buttons and menus it’s packing to accommodate it.

This story has been updated since it was originally published in 2016.

Starting in the 8th century, players are asked to look across the medieval world and select a single ruler, from the mightiest Emperor to the lowliest local official. You’re then in charge of that person’s affairs (and by extension those of their lands) until the day they die.

And when they do, provided you’ve managed to secure a successor, you start playing as them, and so on and so on until you run out of heirs or the 15th century draws to a close.

At face value, CKII is a traditional strategy game. It’s asking you to do what every other strategy game does: play cerebral whack-a-mole, balancing a number of variables and threats in whatever way seems most prudent to you, the ruler. There’s an economy, and fighting, and diplomacy, and everything else you’d expect.

Only what you expect and what you get with this game are two very different things. CKII doesn’t ask you to worry about how much timber you’ve got in a warehouse, or how many catapults you’ve built. This isn’t a game where you have to care about juggling complex trade routes, or build individual infantrymen.

It’s a game about people.

See, you don’t play CKII as some distant, God-like observer. You’re in the boots of one of the guys (or gals!) living through the game, and so the options available to you at any moment are limited to the very human ones a ruler could directly order.

You can disown a dwarf son, adopt a mysterious bastard, arrange a Papal vote, host a feast, go hunting or even just invite someone over for dinner.

This stuff isn’t window dressing, either, it matters. The core of this game is a vast network of interpersonal relationships, the game constantly calculating how everyone is feeling about everyone else. How you get along with someone, influence a decision or have something done to you is almost entirely dependent on what other characters think about you, which in turn is determined by how you were raised and what your personality is like.

So decisions and challenges in CKII aren’t “I need more wood so I’ll chop more wood”, they’re more like “I need to declare war but my council is against this so how can I persuade them without resorting to murder and oh fuck it I’ll just murder someone”.

This extends all the way through to national diplomacy. For example, there’s no abstract value weighing how much England likes France. That’s reliant on the personal opinions of each King/Queen, and is influenced by everything from where they were born to who’s on their council to who they’re married to.

They may be best friends in 1150, but a few dead Kings later and they will be at each other’s throats. So CKII isn’t an economic or military strategy game (though those elements do feature), it’s essentially a political simulator. And a very good one at that. 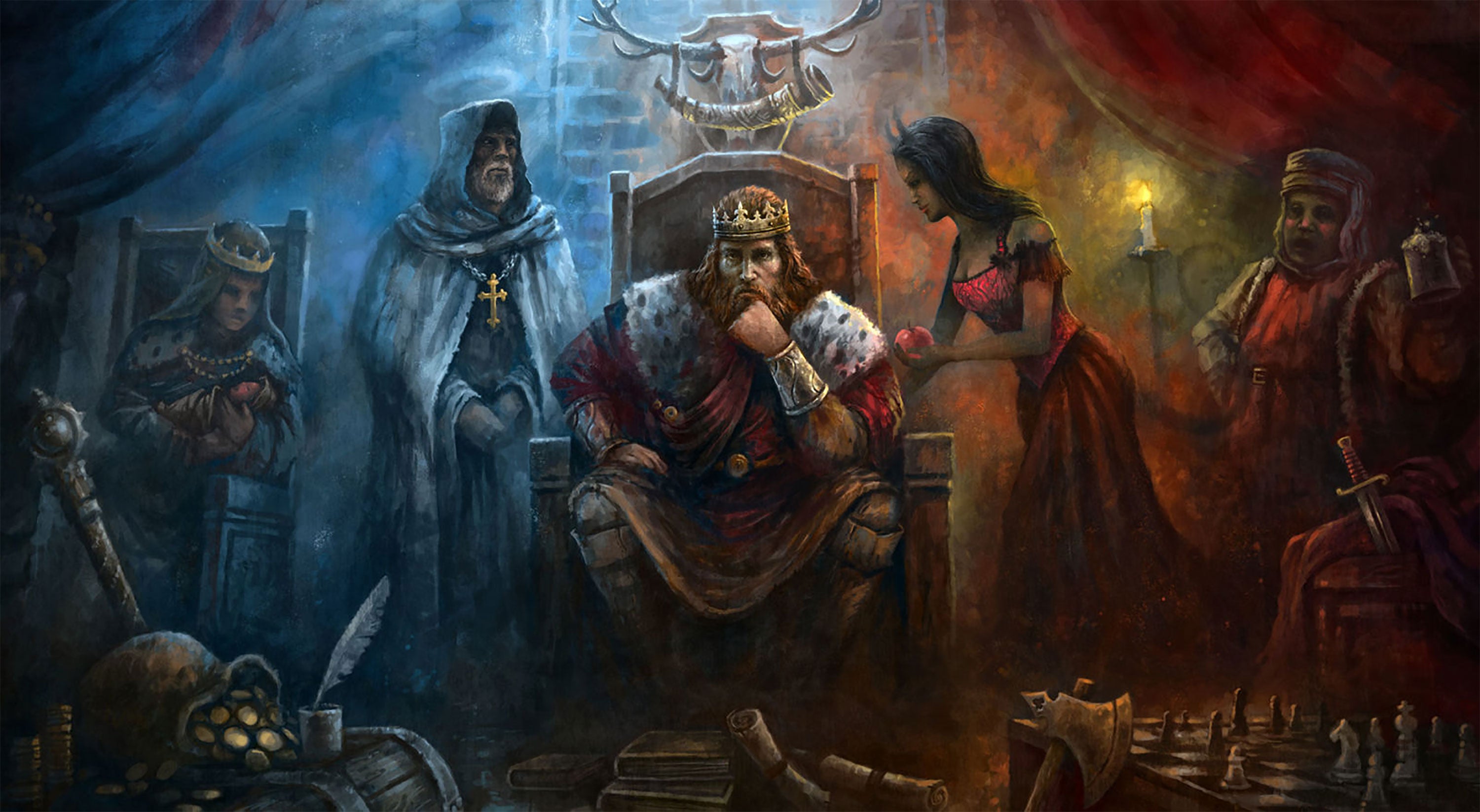 What this dependence on character does is turn each game into a gripping story. Strategy games have long leaned on narrative to dress up their box-ticking, from Civilisation’s personalities making AI seem human to Total War’s historical plots, but they have got nothing on Crusader Kings II.

Everything that happens to you in CKII feels like a personal affront or triumph because that’s exactly how the game works. Whether you’re torturing a foe, fending off a challenge on your title or having an affair, every click of your mouse is telling a human story with complex human beings.

Denmark didn’t invade, their arsehole King did. You didn’t secure power by harvesting minerals, you killed a few people and bribed a few others. Every day that passes, you’re writing your own bloody, historical version of Game of Thrones, only with the Crusades replacing dragons.

All of which is terrific stuff, but then, I said a lot of this before when I reviewed the game the first time. What’s happened since is nothing short of remarkable.

Five years of constant updates, expansions and patches have turned a game that was already vast into something almost unmanageable, a world so full of possibilities that even so many hundreds of hours into my life with the game I feel like I’ve barely explored the fringes.

Here’s just some of the stuff that has been added to CKII since launch:

Like I said, it’s now a game of mind-boggling scope. Some expansions have passed me by, while the updates present in others, like a more intricate Papacy and trade rules, are things I’d rather not pick at.

But what an extraordinary game this is that I have that luxury. To be able to pass up entire new systems and ways of playing, and still drown in the possibilities available to me. 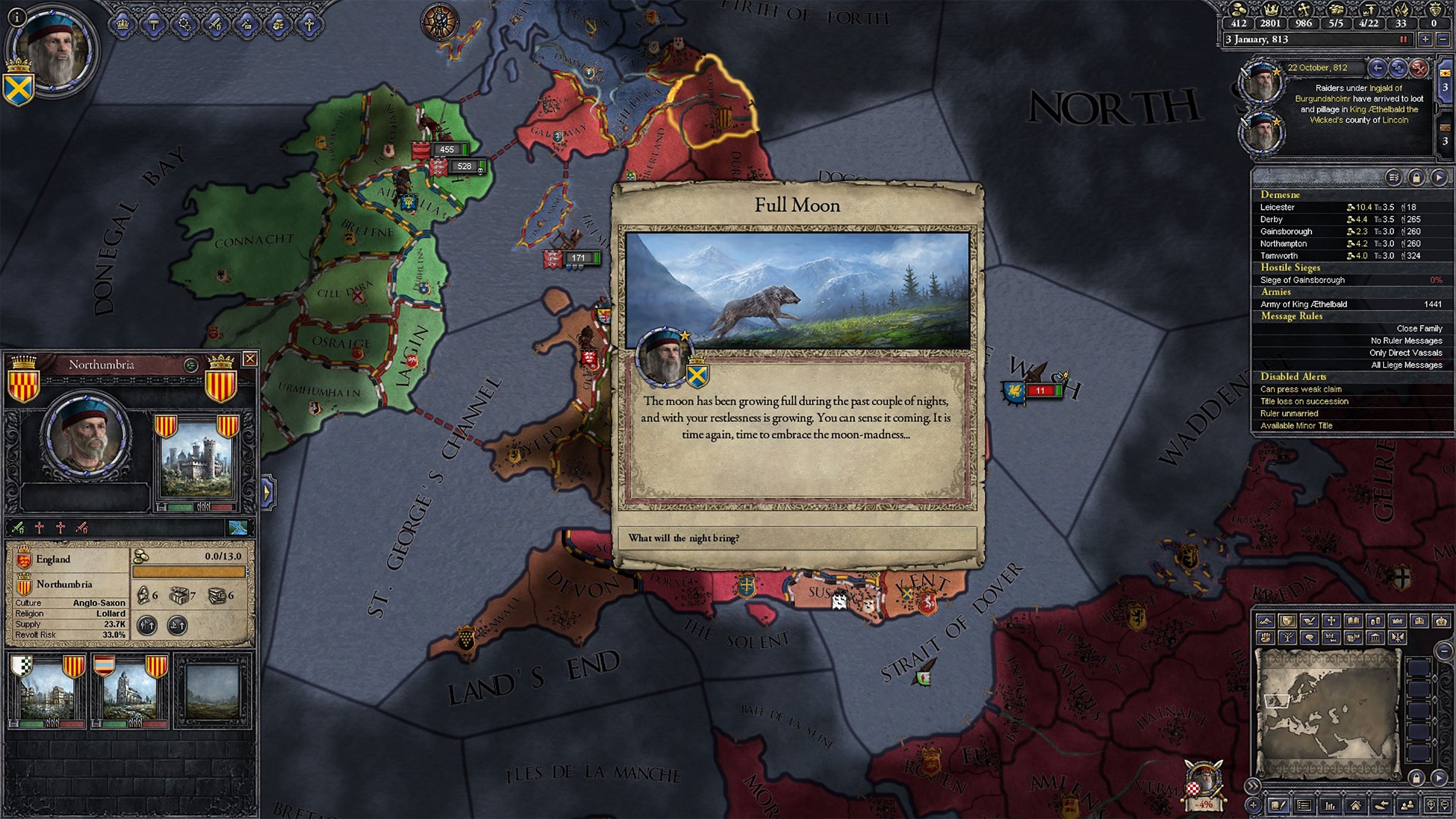 A Mercian Werewolf In London

Late last year, having not played for a few months, I fired it up and after a few hours found out that my King was secretly a werewolf, who would sneak out at night and eat cows.

Which … OK, cool, not only did someone involved with a deeply complex and historical strategy game think that up, but they went and put it in the game. Awesome.

And just this month, again having spent quite some time away from the game, I’ve revisited to find that the Chinese are now present in Crusader Kings II. You can’t play as China, and they only feature on a small part of the map (China itself isn’t there, since adding that much geography would break the game), but they’re still available to make deals with, go to war against and invite to your court.

That’s an astounding thing to come back to. Here’s a game already overflowing with races, peoples and faiths, so many that few players will ever truly come to terms with them. And half a decade later, where you’d forgive Paradox for either giving up or phoning it in, have only gone and added the world’s largest and most advanced empire for the time, and everything that could entail for your own holdings.

Simply adding more and more stuff sounds like a cheap way to improve the game, but the thing about CKII is that everything that’s been added has been woven into the game’s systems. Because it’s a game that’s about the stories you create, and not necessarily the score you rack up, there’s no need to worry about new content being for a certain type of user, or for the player to have somehow “completed” CKII before they can enjoy it.

Few pieces of new content jut out, or are clearly bolted-on; rather they merge with everything to simply create a game that’s bigger, bolder and better than what was already there at launch.

Sadly, as amazing as everything I’ve said above was and has become, I’m still a bit sad that the vanilla game’s main failing is still very much in effect, if not worse: it’s too damn much.

A game with a lot of options and commands, by necessity, needs a lot of menus and buttons. And I’m not a UI designer, so I’m not going to tell Paradox how they can a better job.

But I know that, somehow, a better job needs to be done. Even as a seasoned strategy game player it took me a long time to get my head around how this game works, a fact helped by the fact I was into the history and had the motivation — namely, this is my job — to learn. 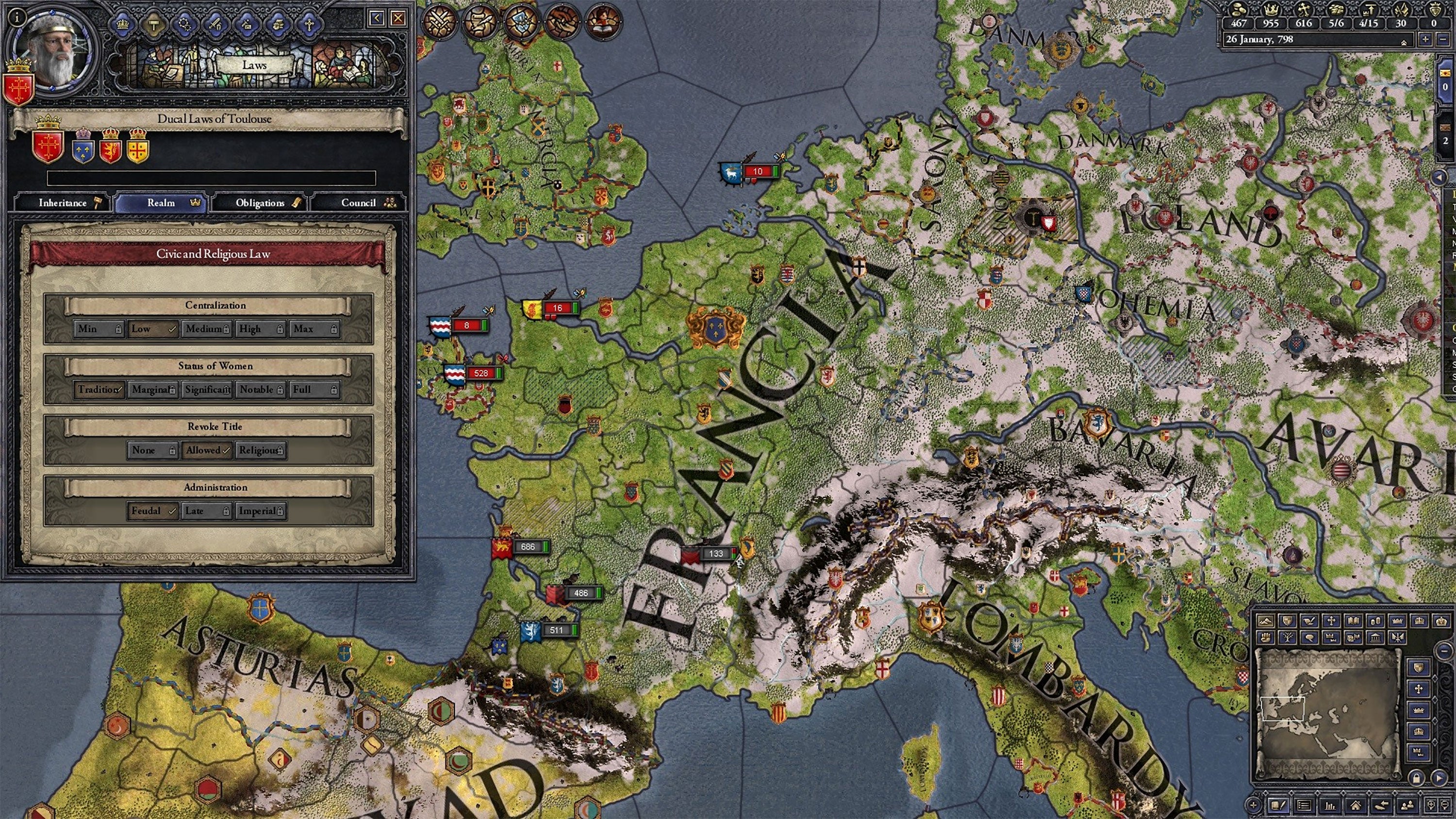 Buttons atop buttons within menus beneath menus.
For others, learning how to play this game and tame its massive interface can be too much to ask. This isn’t helped by the fact that the game’s tutorials are sorely lacking, leaving prospective players to alt-tab into YouTube every time they want to learn even the basics.

It’s been a shame breaking such a fantastic game down like this for years, selling it to friends and colleagues on the strength of its political and human heart, only to find most of them giving up because its learning curve is just too steep.

CKII’s AI is also still a bit wonky. Its people act and react to you with terrific skill, but more traditional strategy game AI manoeuvres, like moving armies and ships around, remain frustratingly busted.

The most common and obvious example of this is the way the remnants of AI armies will constantly run away from you once you defeat them; you’ll spend more time chasing them across the map than you will fighting them, which is distracting as it keeps you from more important matters.

If I’m going to shower praise on the game’s official expansions, I can’t re-review CKII without also mentioning the impact mods have had on the experience. Users have created everything from new maps to new art assets to new tech trees, some of it to enhance the game’s historical authenticity, others because…well, because they’re PC mods. 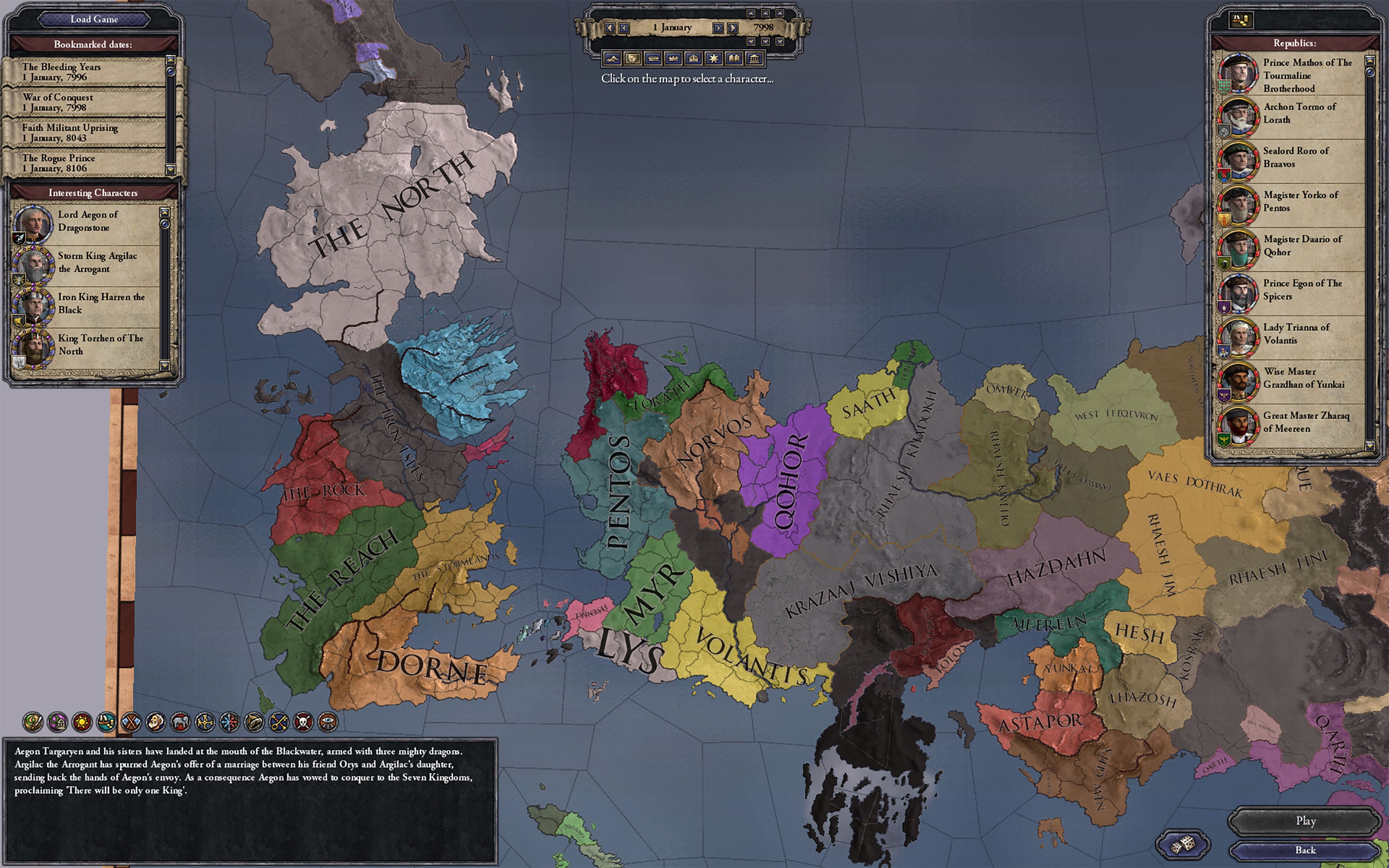 The Seven Kingdoms, and then some.

One mod stands out above all others though, and that’s the Game of Thrones conversion (download it here), which turns the game into a terrifyingly complete simulation of the show/books, letting you indulge in the the same kind of political shenanigans and moral abandonment you first enjoyed in Europe, only now in the even-more appropriate setting of Westeros.

The Struggle To Cram Game Of Thrones Inside A Video Game

Game of Thrones is a cultural wrecking ball, but despite being around for seven years now (or 21 counting the books), it hasn't left much of a mark on video games. There might be a very good reason for that.

I cannot understate how good this thing is. If it had been a standalone Game Of Thrones tie-in it would have made millions.

Five years ago I said Crusader Kings II was a very good video game. So good, in fact, that it was a contender for 2012’s Game of the Year. It didn’t win, but unlike most of its competition that year, it hasn’t faded from public consciousness or been replaced by a prettier sequel. 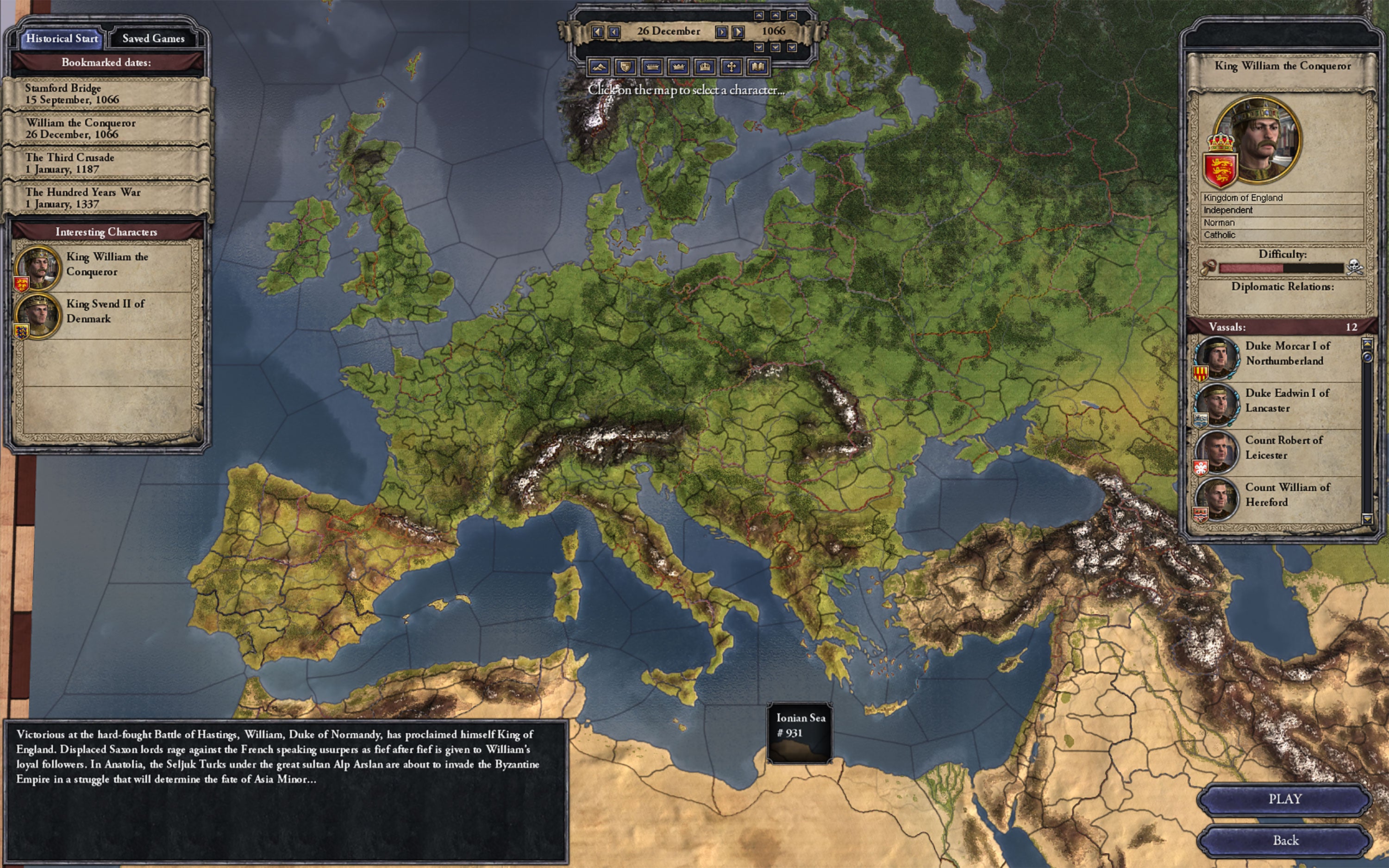 Instead, it’s quietly but consistently expanded and improved itself, gestating with a kind of confidence in its core systems and hardcore appeal that in this fleeting and skittish industry is downright admirable.

I can’t think of many 2012 games that would only crack our list of The Best PC Games in 2017, five years after they were first released, but if anything is testament to Crusader Kings II’s strength and consistent brilliance, it’s that.