Inside The Brothels Of Final Fantasy XIV 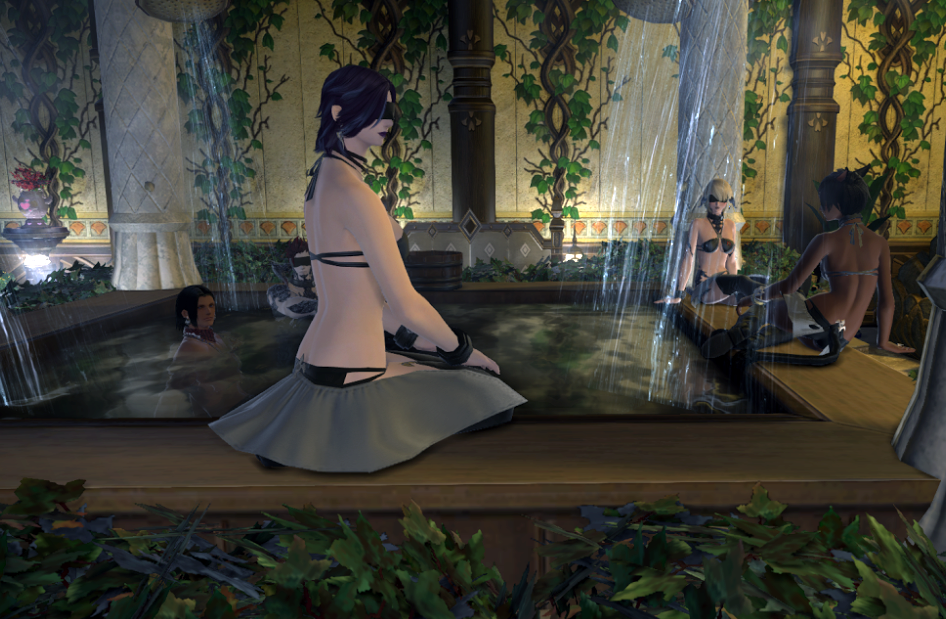 The madam Queen Tepe met me near a bustling harbour in Final Fantasy XIV. "Will you be coming to the mansion?" she asked me. "I'd appreciate an escort," I responded. Moments later, I'd meet five of them.

In private rooms, cat girls sprawl out on beds with elves, humans, blue-skinned giants and other fantastical races playing out fantasies ranging from lighter bondage fare to all things tentacles. Anything is possible in text chat, and what can't be conveyed in words is conveyed through emotes like /hug and /doze.

Tepe and I rode to her brothel, Tepe's Treasures, on the back of a feathered, white bird. Dressed in sunglasses and a red and black patched military-style jacket, Tepe looks more the part of a general than a madam.

On our way, she told me that the idea to run a literal cathouse in-game started as a joke, a sort of what-if scenario that she laughingly made manifest three years ago. Tepe's old guild accommodated the best it could, charging a meager 15,000 gil for intimate play. The front quickly attracted a serious following.

"I never half-arse anything," she said. 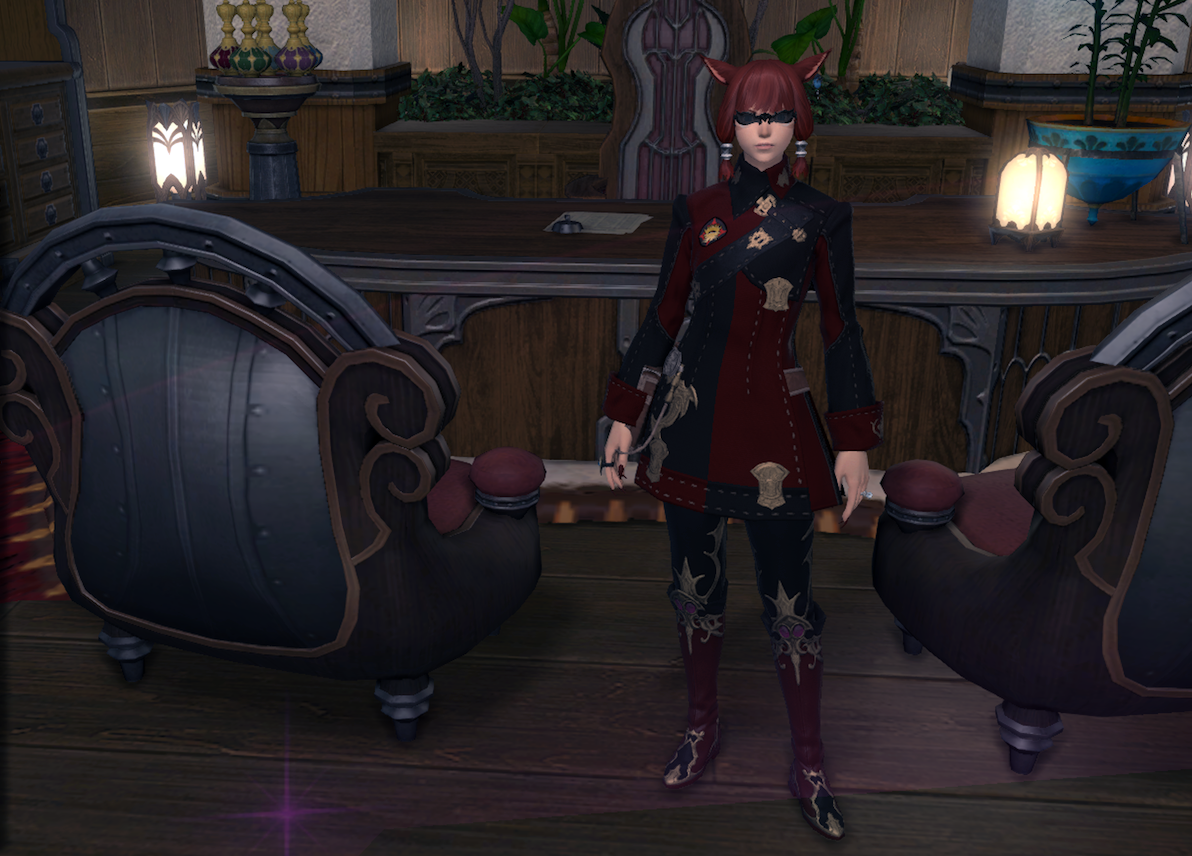 Tepe led me into the mansion and as the doors opened, five courtesans perched on a table slowly revealed themselves, each wearing uniforms matching Tepe's. "How may we help you?" one said. The brothel was in service.

In that two-hour window, Tepe explained, "people can come in with scarcely a waiting period" to visit whichever of Tepe's 40 courtesans were online. Clients staying for thirty minutes would pay half the 100,000 gil fee upfront. Downstairs, dozens of private rooms designed by those same courtesans, in the style of a wooded hot tub enclave or a luxury hotel room, were available for intimate affairs.

Dorothy Haze, a courtesan who dutifully followed us on our tour of the mansion, had only two weeks working for Tepe under her belt, but said she'd made 4.4 million gil in clients — granted, that's only about $US12 ($16) if purchased from a gil-farming site, but a large in-game sum by many players' standards.

Players who aren't available to actively ERP will undress their avatars and program them to dance on stage for a couple of hours while they're away from their computers, receiving as much as 10,000 gil an hour for it. The money these courtesans make, many told me, goes right back into decorating their rooms or is transformed into gifts, like weapons or clothes, for their online friends. Tepe is upfront about what she does with her cut of the take. 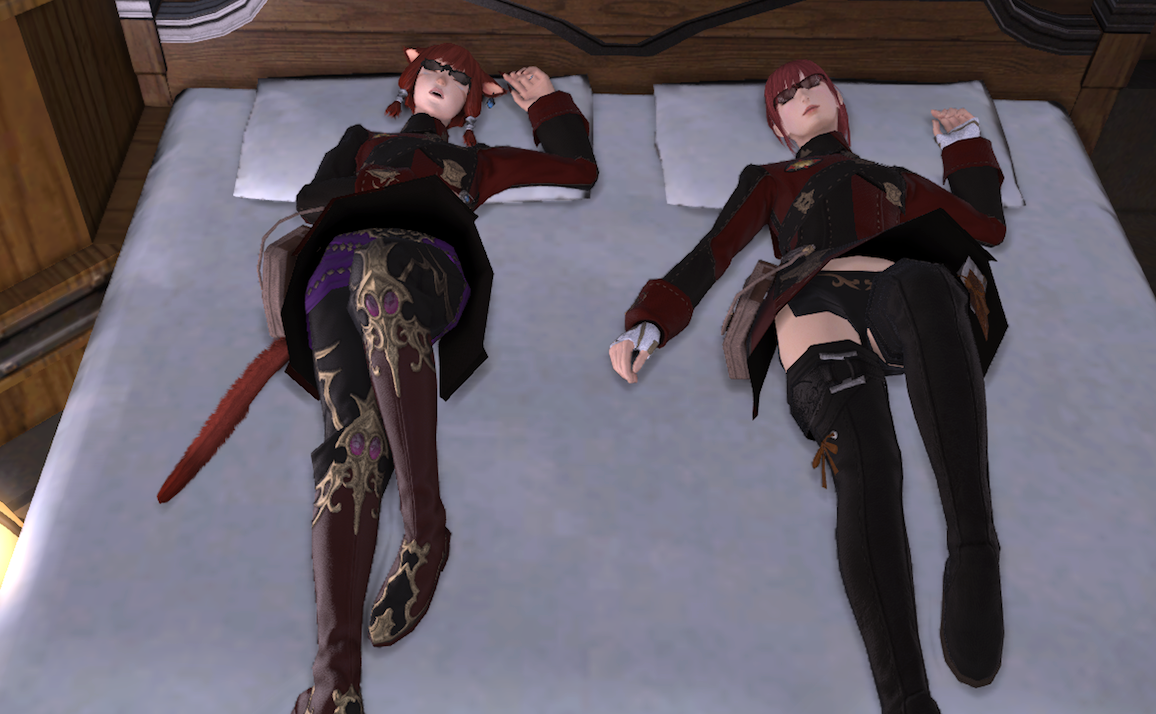 I asked two FFXIV courtesans on another server to show me how a for-money ERP session would typically begin. Here's what they wrote.

He would slowly turn his gaze toward Vel, a soft smile forming across his lips. His arm nearest her would slowly rise up to run his palm along the center of her back as he eased in closer to place a small kiss upon her cheek. Mr. M

Her ears fold back gently as she tries to hid the blush forming on her cheeks, tail swishing slowly behind her as she leans her head to him, a small smirk growing on her glossed lips. Ms. k

Despite appearances, FFXIV courtesans don't turn tricks on wordplay alone. Never had I met an avatar as expressive as Tepe. Her mastery of the game's emote system was clear. There were no noticeable pauses between her avatar's brash, confident writing and motions of "struts like a songbird," "beams with delight," or "does the Ranger Red pose."

Moment-to-moment, her avatar felt more like a live-action anime character, as opposed to anything that had ever gone on a quest or leveled up. 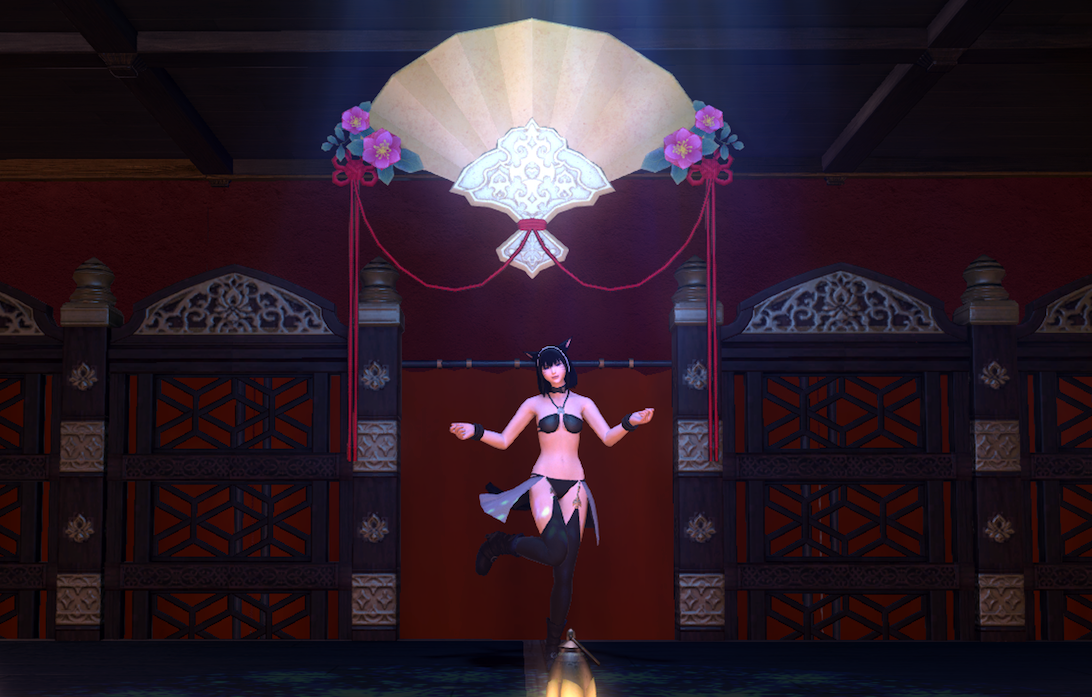 I was awed by the lengths to which these online courtesans had gone to create this illusion. My only lingering question was: Who does this?

When I asked around, the courtesan Johbi'ya Jhosre said he got into for-money ERP through his IRL partner of ten years. Jhorse's partner, he told me, plays "a female courtesan that is married to the female miqo'te over there," she said, gesturing to a player portraying one of the game's cat-like race of avatars. "We've always maintained that in-game is not IRL," he said. 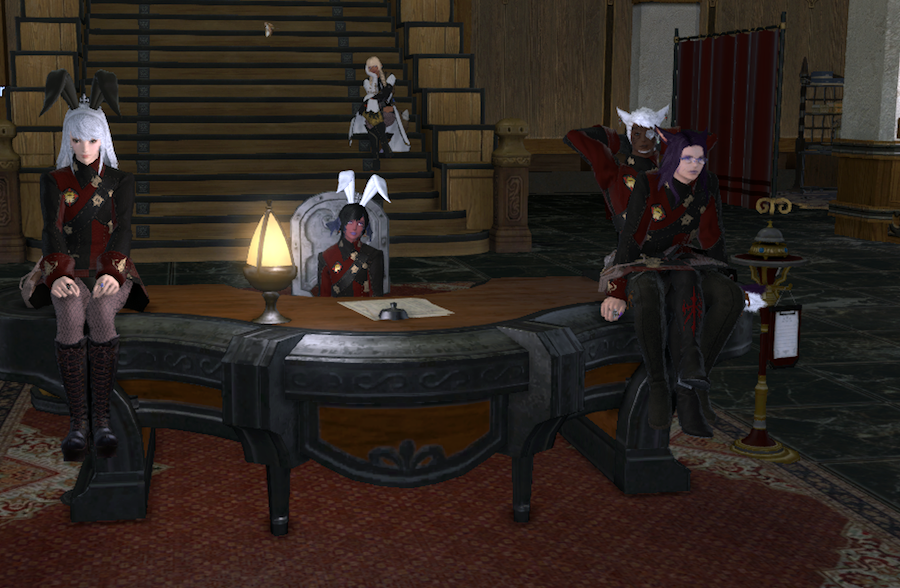 On the Leviathan server, a blond madam in a red coat with tails by the name of Mistress led me on a tour of her brothel's library, showroom and private chambers. The mansion had a burgundy hue, embellished with gold and furs. In most rooms, sparkling cakes and treats were laid out. She referred to her courtesans as "the entertainment." Up front, johns approach Mistress's call girls and boys with specific requests and fetishes. The madam accommodates, matching customers to courtesans who might share their interests.

The brothel is the flip side of the Leviathan server's mafia, a group of players who role-play gangsters. Behind the basement stage, where a dancing cat girl in a black bikini churned through her routine, was the mafia's "sweatshop."

There, players crafted "bootleg" items that, because it's a game, actually work. When I was introduced to the brothel's godfather, he sat alone in an oxblood-coloured room, contemplating a fire. I asked whether I could talk to him about the sex industry in FFXIV. All he said was, "We just provide entertainment." 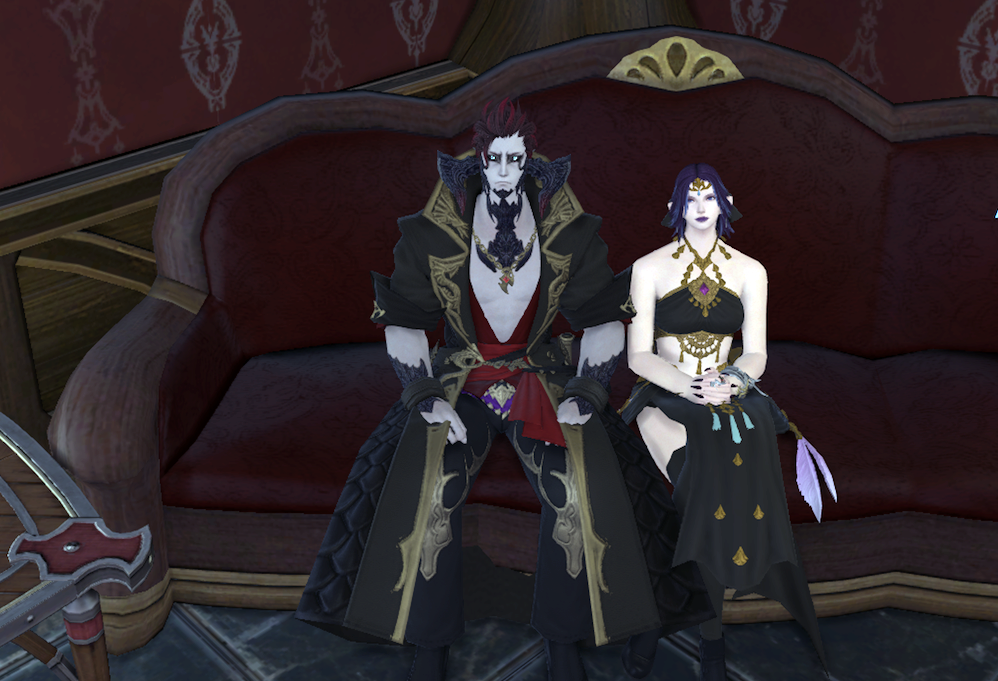 The courtesans don't disclose their real-life genders, even when asked. "If you're a guy playing a female character, that's your character. It shouldn't matter to the client what your actual gender is," Mistress explained.

"That's our main rule." Mistress, who said she is a stay-at-home mum with a 14-month old, said she had "no reservations" about starting the brothel and spends her days kicking back with a glass of wine and enjoying her empire.

Sex workers on FFXIV tend to be open about what's off the table for them. It isn't much: often, dismemberment, mutilation, necrophilia and what's referred to as "age-play," or sex between avatars of wildly different ages. Would-be customers playing as the FFXIV race Lalafell, who resemble toddlers, are rarely serviced.

That's not to say it doesn't happen. Ms. K said that, once, when somebody asked for an age-play session, "I looked at the screen, I smirked and I played straight through it." 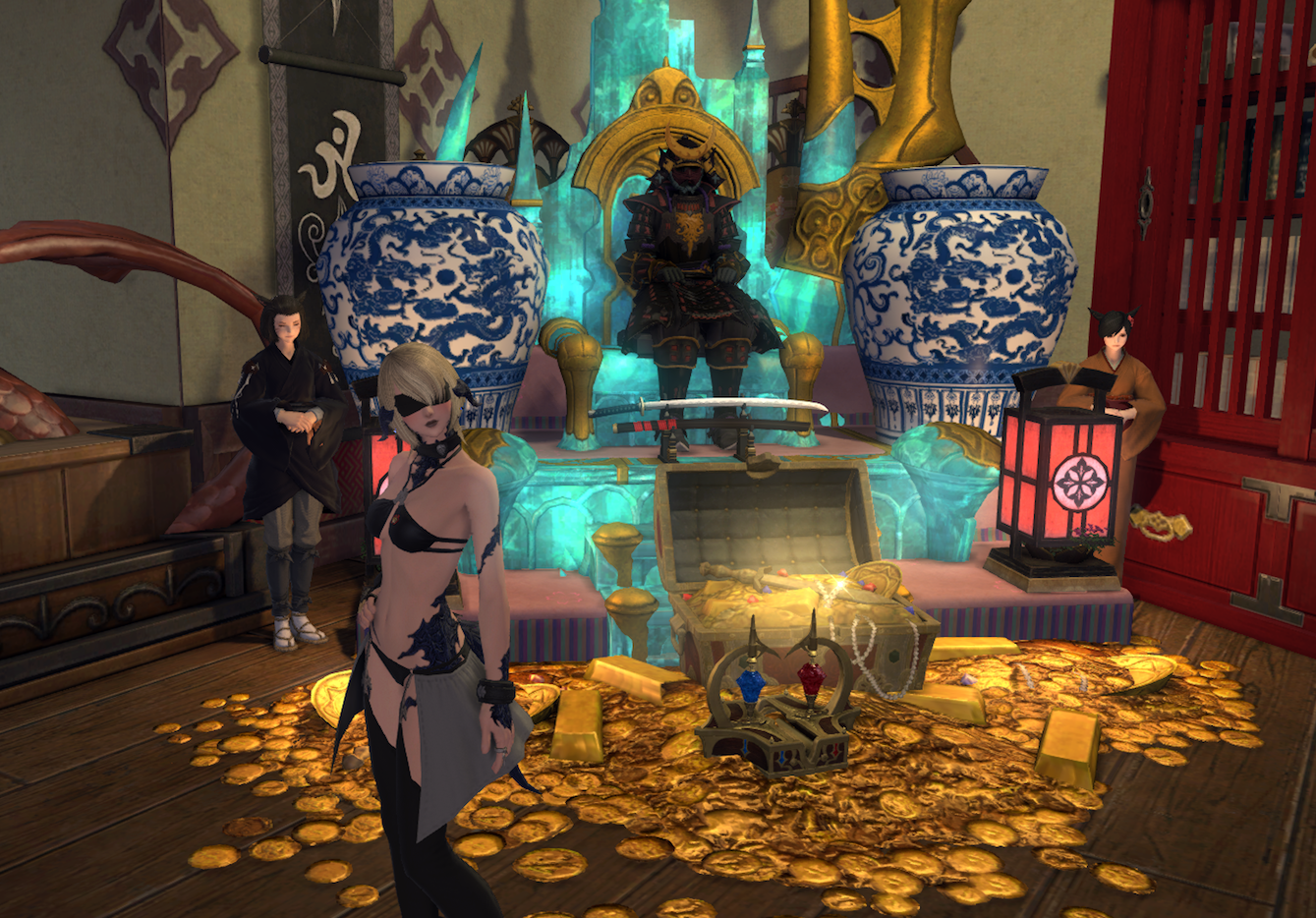 At the end my tour of Tepe's Treasures on Hyperion, Tepe confided that she had never had an interest in ERP before she'd started the brothel.

"I used to think this was just 'Smut for losers who can't get a real girl,' like most people," she said. Now, she said, she gets it. It's not about getting off, at least not entirely. It's an expert mode challenge not entirely unlike finishing a high-level raid, though in this case, it's solving a writing puzzle that the game empowers even if it doesn't explicitly endorse.

"Half the times a client comes in here, I have no sexual interest in their fetishes," she said. "I do it anyways, I learn their fetishes, figure out what makes them tick, and try to write it so well that nobody would know it wasn't my fetish."