iOS 11 Is Killing Me

OK, look. I’m not the first person to say this, and I certainly won’t be the last. But iOS 11 is bad. The new operating system has turned my phone into a bug-infested carcass of its former self, and the frustration of trying to use it sometimes makes me want to die, too. All images: Adam Clark Estes / Gizmodo

Plenty of people have qualms with the design. A couple of months ago, my former co-worker Jesus Diaz wrote a spirited and well-argued piece in Fast Company under the unapologetic headline, “iOS 11 Sucks“.

His gripes are gripes I’d heard many times when Jesus was still at Gizmodo: the text alignment is off, the UI conventions are dumb, Apple doesn’t pay attention to detail any more, and so on.

He isn’t wrong about any of these things.

My gripe is different. It’s been two full months since Apple released iOS 11 to millions and millions of devices worldwide, and the software is still just buggy as hell.

Some of the glitches are ugly or just unexpected from a company that has built a reputation for flawless software. Shame on me for always expecting perfection from an imperfect company, I guess.

But there are some really bad bugs, so bad that I can’t use the most basic features on my phone. They popped up when I upgraded on release day. They’re still around after two months and multiple updates to iOS. Shame on Apple for ignoring this crap.

Now, let me show you my bugs. The worst one also happens to be the one I encounter most frequently. Sometimes, when I get a text, I’ll go to reply in the Messages app but won’t be able to see the latest message because the keyboard is covering it up. I also can’t scroll up to see it, because the thread is anchored to the bottom of the page.

The wackiest thing is that sometimes I get the little reply box, and sometimes I don’t. The only way I’m able to text like normal is to tap the back arrow to take me to all my messages and then go back into the message through the front door. 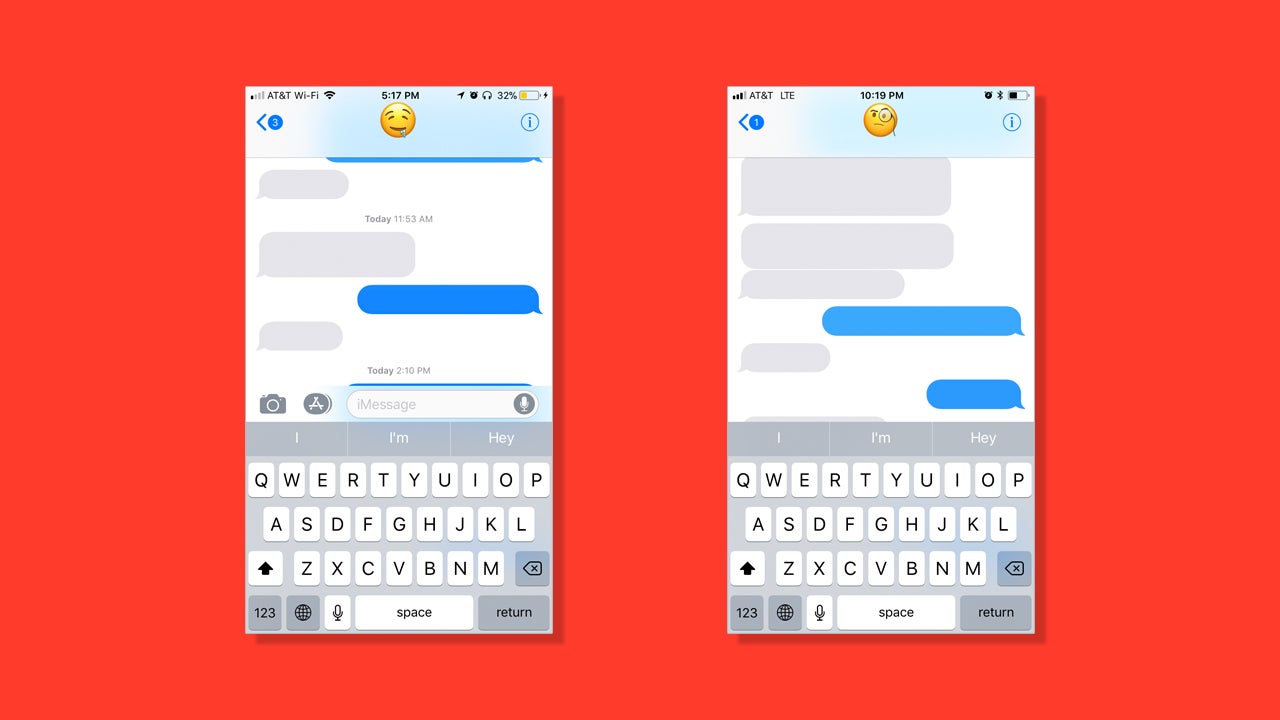 I removed the text from my messages because it’s none of your business.

This isn’t supposed to happen. Normally, tapping the compose field to reply to a text pulls out the keyboard and pushes the latest message above where the keyboard is displayed. And normally, if you’re looking at the keyboard, you’re also looking at a reply field. Otherwise, where are your words going to go? That way you can read what you’re replying to.

Not so in iOS 11. This bug screws me up on a daily basis.

I’m not a developer, but I think that this bug is related to the lock screen. The keyboard bug seems to happen most frequently when I swipe a text message alert to compose a reply.

I’ve also encountered some other lock screen bugs related to the Messages app. Some of these happened when I wasn’t paying attention, so I wasn’t able to figure out what was triggering it or how to fix it. One time, however, it felt like I was watching iOS meltdown right before my eyes.

This bug was possibly related to the keyboard bug above, as there are some similarities. When I tried to reply to a text without unlocking the phone – this 3D Touch trick is the only time I ever use 3D Touch – the phone showed that my friend was typing with that animation that makes me incredibly anxious.

And then I got a message from her while she was still typing. And then I got two more of the typing animations that then moved around as I actually received additional messages from the same friend. 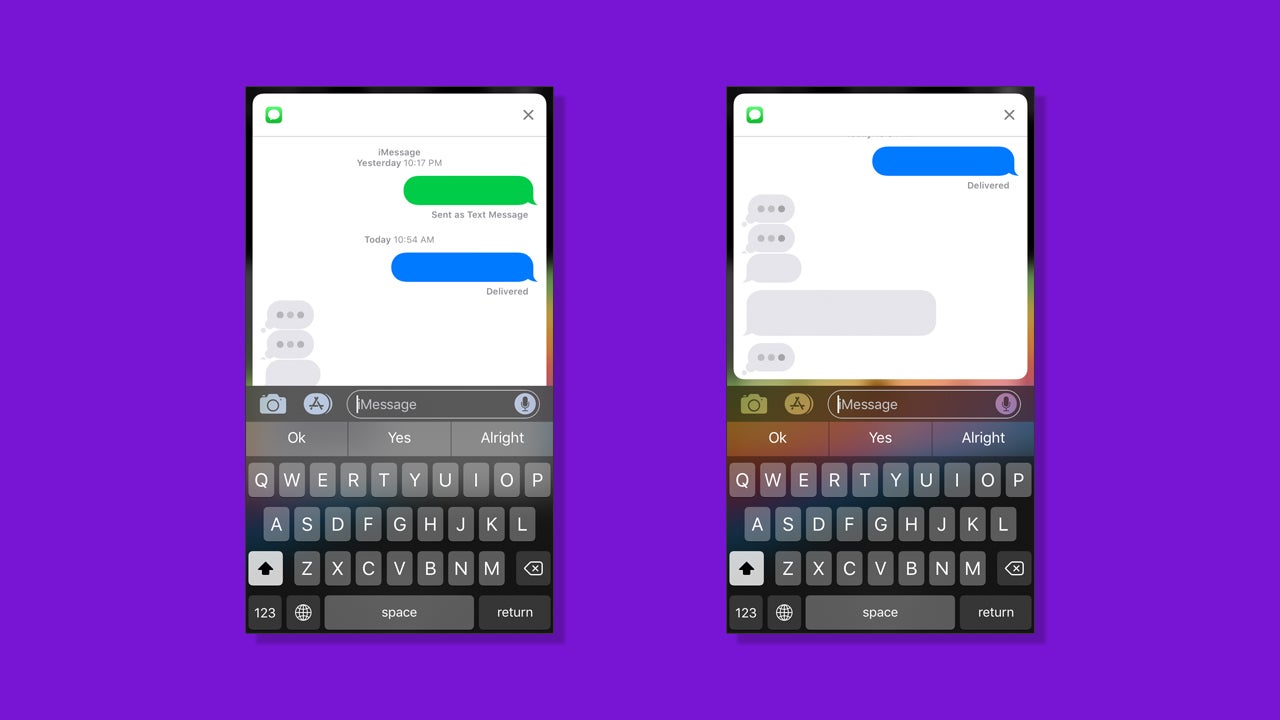 I left the dots in the thought but removed the text. You’ll also notice that one of the thought bubbles is weirdly cropped on the bottom left.

Apple has even been forced to admit that the app contained some glitches, when it pushed out an update that fixed the bug where you’d type “i” and get “a” plus a weird Unicode symbol.

But other native iOS 11 apps have bugs, too. Until a recent update, my iPhone screen would become unresponsive, which is a problem because touching the screen is almost the only way to use the device. The Phone app also has a cool bug, where I can only access my voicemail periodically.

Sometimes when I make phone calls the person I’m talking to sounds like a monster. These could be carrier issues, but still, the glitches shatters the image that Apple builds flawless products. The company doesn’t. One could argue that Apple products were never perfect, but I’d say they’re less perfect now than ever before.

I’m not trying to make an exhaustive list of everything Apple’s done wrong lately. I don’t even want to detail every single bug or design flaw in iOS 11, because that would be both whiny and boring.

Suffice it to say, the operating system is still glitchy two months after release, and bit by bit, Apple seems to be fixing the problem. Does the newly buggy iOS make me want to switch to Android? Not exactly.

Does it make me feel wistful for the days when you could count on an overpriced Apple product to just work? Absolutely.

Then again, back when the iPhone 4 came out and it felt like Apple could do no wrong, smartphones were a lot simpler. The cameras were joyfully crappy. The screens were small. The number of apps we could download and things we could connect to was paltry compared to today. Augmented reality existed almost exclusively as a theoretical thing that the future might bring us.

Fast forward seven years, and smartphones can power virtual reality headsets. So far, it looks like Apple has finally brought AR to the masses – for free.

We should expect some bugs, I guess. More complex pieces of technology contain more points of failure, and I’m oversimplifying the issue. I’m not apologising for Apple’s sloppiness.

However, I am trying to understand exactly how my life with computers veered so dramatically from the days of Windows 95 when nothing worked right, to the golden age of the iPhone 4 when everything seemed perfect, to now when just a handful of iOS bugs make me feel like the world is falling apart.

Maybe the world is falling apart. Maybe the bugs are the first assaults in Siri’s inevitable war against her makers. Maybe I’m the annoying thing, the whiny one who’s upset that nothing seems perfect any more. Or maybe Apple is slipping, and we were wrong to trust it all along.