bethesdakotaku coremachinegamesplaystation 4wolfensteinwolfenstein 2 the new colossusxbox one
To sign up for our daily newsletter covering the latest news, features and reviews, head HERE. For a running feed of all our stories, follow us on Twitter HERE. Or you can bookmark the Kotaku Australia homepage to visit whenever you need a news fix.

Wolfenstein‘s BJ Blazkowicz is one of the original first person shooter protagonists. He is a muscle bound action hero, the all-American army man. Through examining BJ’s body, Wolfenstein 2: The New Colossus paints a thin line between power fantasy and Aryan ideals. After his injury at the start of The New Order, BJ recovers in a Polish asylum. The assumption is that a burly, blond soldier can’t be anything but a Nazi war veteran. The fascination with BJ’s body persists throughout the game, most notably in a sequence with Frau Engel on a train to Berlin.

Walking through the dining car, Engel stops BJ to admire his figure. It is an Aryan figure, she says, her tone dripping with sexual lust. In this moment, BJ is an embodiment of an ideal: powerful, handsome, and superior. He looks like the ideal Nazi, as well as the model of an ideal video game protagonist.

The New Colossus picks up this fascination with BJ’s body. Throughout the game, he wears numerous suits and bodies that express different ideas of power. At the start of the game, BJ is wracked by injuries sustained at the end of The New Order.

To compensate for his physical deficiencies, he dons a suit of power armour used by resistance leader Caroline Becker. The suit was created by the mysterious Jewish organisation Da’at Yichud. It is a powerful shell that keeps BJ on his feet as his real body fails him.

BJ is the son of a Polish Jew, quietly religious in his internal monologues. To face off against the Nazis, he is dependent on the Da’at Yichud armour. It is a manifestation of faith, a feat of Jewish ingenuity that wards off damage and allows BJ to confidently face his enemies.

He is buoyed by a relic of his faith, protected by a shell of Jewish design meant to weather the anti-semitic hordes. But even this newfound armour can be broken and beaten. Faith, at least in The New Colossus, cannot last forever in the face of unspeakable oppression.

Halfway through the game, BJ is captured by General Engel and tried for terrorism. An elaborate escape sequence plays out in which BJ kills his captors and encounters his mother. It is a dream — instead, he is executed publicly in front of a cheering crowd gathered at the Lincoln Memorial Reflecting Pool.

Engel cuts his head off and casts it into a furnace. It’s a shocking moment that gives way to pulp science as BJ’s comrades manage to recover his head before it can be burned, keeping his brain alive in a jar.

They attach his head to a “biologically enhanced supersoldier body” stolen from the Nazis. 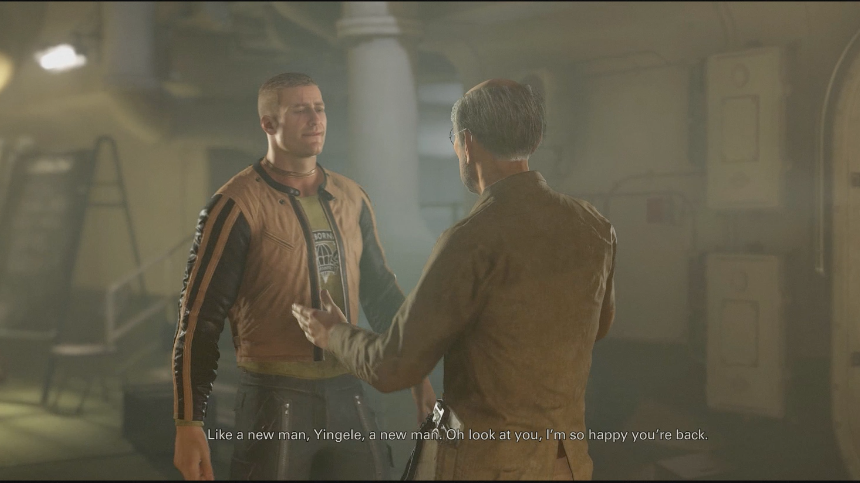 BJ’s reconstruction is both silly and significant. It is telling that BJ’s head, with its rugged features, fits so well onto a Nazi-crafted model of physical perfection. He doesn’t look much different now than he did in his original body.

BJ might be a Texas-born Army Ranger, but he was never far off from the Nazi ideal. The New Colossus is heavily concerned with the construction of bodies and the shape and form of oppressors. It is significant that BJ, as a finely-honed killing machine, physically dovetails with the Aryan ideal.

If his body is not so far removed from a Nazi body, what makes him different than his foes? It is ultimately a matter of belief.

BJ’s body might be the Aryan ideal, but his mind is what separates him from his enemies. The New Colossus firmly argues that violent resistance is a necessary act. It cares about the direction violence flows. BJ’s violence is not directed towards the oppressed or marginalised; it is focused on destroying systems and agents of oppression.

Criticising the construction of BJ’s body also poses questions about video game protagonists and power fantasies. Early shooters, particularly in the 1990s, were a cavalcade of burly men, the apex being the chiselled, blond Duke Nukem. All that mattered were the muscles.

The New Colossus looks back at this. Physically, BJ embodies the same power fantasy as he did back in 1992. 24 years later, he’s still shooting Nazis, but with more introspection.

In changing BJ’s armour and body, The New Colossus examines the construction of heroes and villains and determines that while there are superficial similarities to be found in their bodies, there is a massive difference in their hearts.