A Game About Cooking Eggs And Dealing With The Devil

Hell is a game about cooking eggs. Drop an egg into the pan and watch it sizzle before cracking another egg. But be careful: One wrong move will send you down a road full of demons, pirated DVDs, a Ruger pistol and the devil himself. It’s bizarre.

Hell is a game by Babylon Brooks created for the “A Game By Its Cover” game jam, a recent game jam where participants created games based on fictional video game cartridges. It starts off pretty simple, with a frying pan and an egg. The player’s job is to place eggs into the pan. The big changes come from dropping the egg on the floor, which sets off a bloody and bizarre chain of events.

The results are cute at first. Dropping an egg leads it to hatch, and the gameplay shifts to controlling a small chick as they hunt down worms and food. Get enough food and you’ll turn into a chicken. If you eat even more, you’ll lay an egg with a new chick to control. This cycle can go on for as long as you want. When I played the game, I was content to hatch a small army of chickens. It wasn’t until I realised the chickens could stand on each other that things turned dark. I built a ladder of chickens and climbed to the kitchen countertop. There, I fried eggs in a glitched-up remix of the first part of the game before dropping one on the ground and being sent to Hell itself. 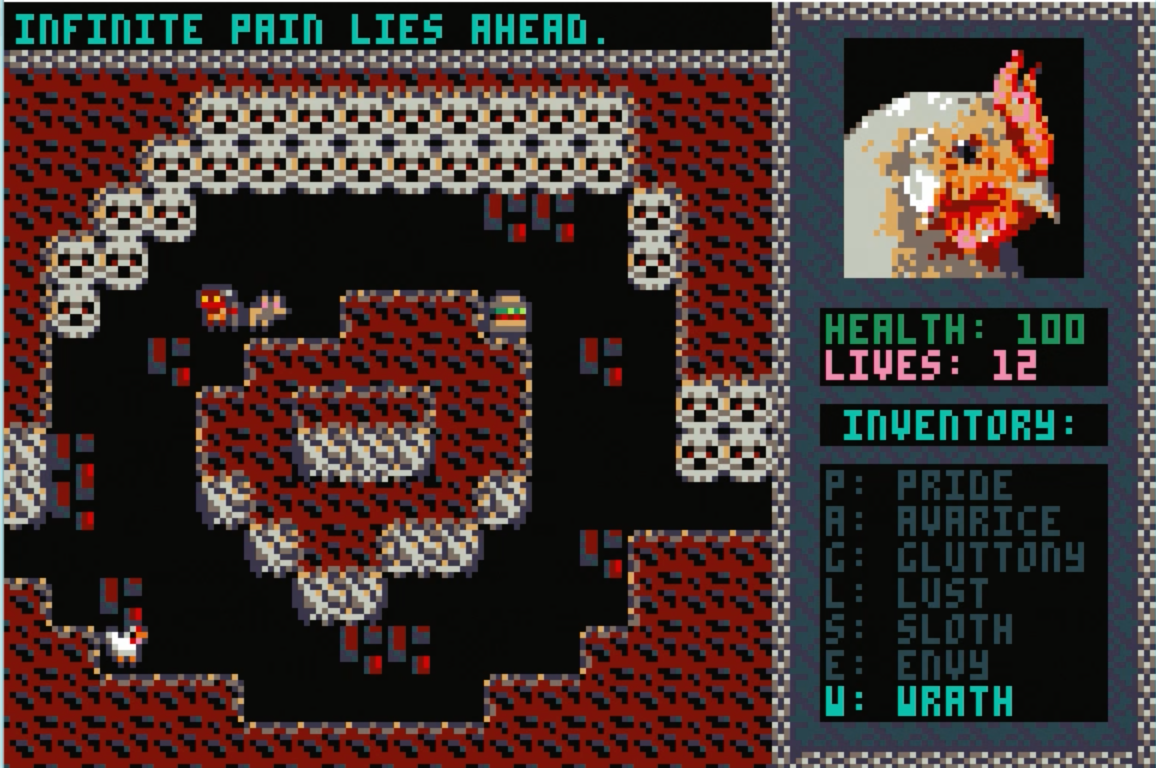 Arriving in Hell changes the game into a tile-based dungeon crawler all about collecting items, dealing with demons, and learning all of the seven deadly sins so you can light a group of ritual altars. It’s absurd. You pick up a pistol and act out the sin of wrath by blasting everything in sight. You envy a lecherous man’s dubious DVDs to learn the sin of lust. You gobble down dozen of hamburgers to become an embodiment of gluttony. I won’t spoil what happens if you learn all the sins.

Hell is an exercise in mischief and debauchery. The innocent beginnings hold a wonderfully whimsical feeling that give way to glitched nightmares and demonic ruins. Playing Hell feels like being the star of a creepypasta or schoolyard myth. It’s strange, and I highly recommend diving down the rabbit hole and straight into the fiery pits. You can play Hell on Windows PC and Mac.