I Completely Missed The Best Part Of Yakuza 0 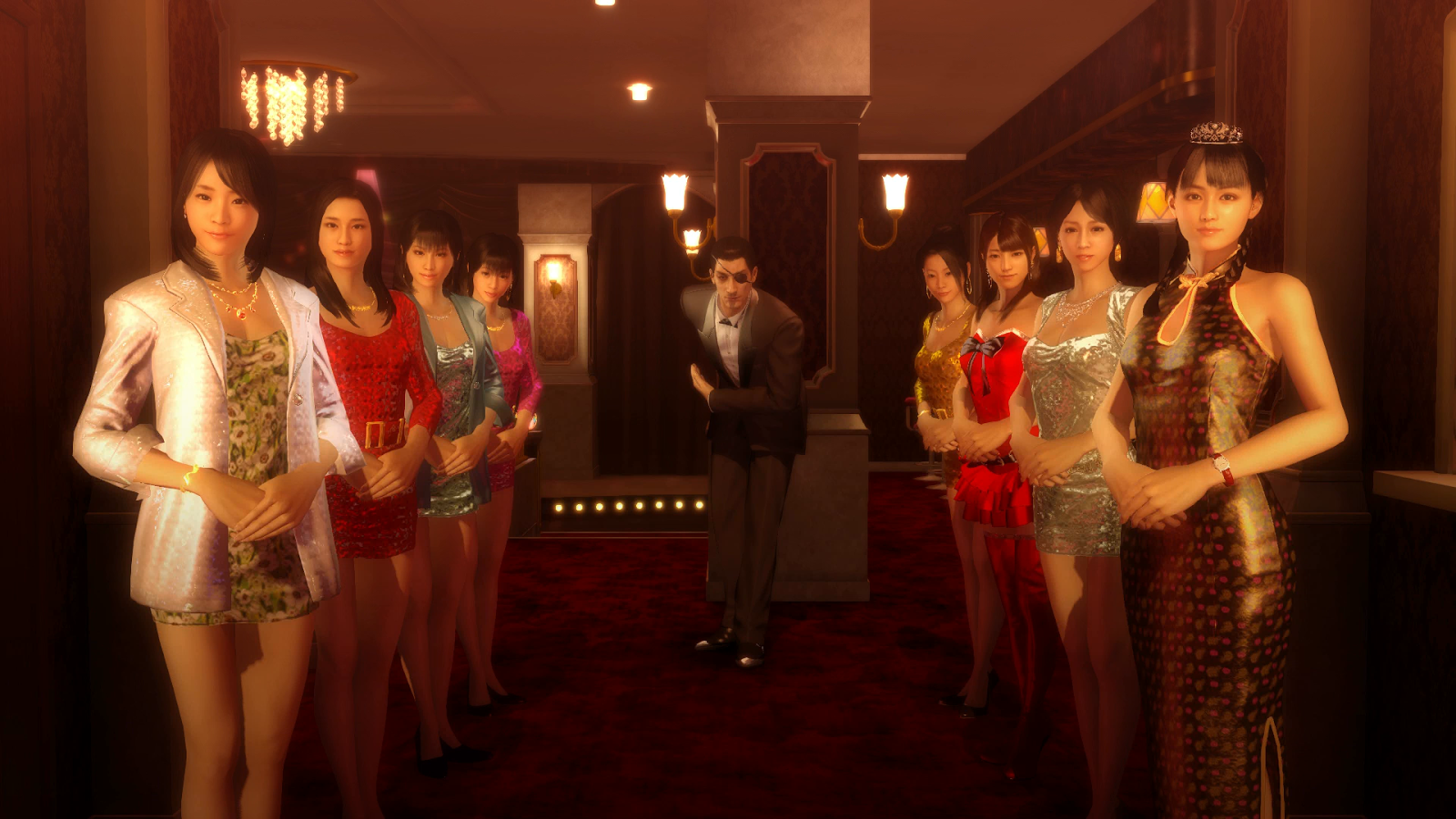 Yakuza 0 is one of 2017's sleeper hits, a prequel to the popular crime drama that brought it to a wider audience. While most of the game is about criminal intrigue and martial arts brawls, a surprisingly robust club management mini-game is one of its most entertaining activities.

Yakuza 0 follows two protagonists as they get caught up in a plot between warring crime families. One of these protagonists is Goro Majima. After betraying his boss' order to let his sworn brother and best friend attempt a dangerous assassination by himself, Majima is outcast from the Yakuza and forced to work for them as the manager at a massive nightclub in Sotenbori, a fictional take on Osaka's metropolitan districts.

He must maintain the club while protecting a young woman marked for assassination. To help with the former task, he learns more about cabaret clubs, hostess clubs that capture the feeling of larger nightclubs on a small scale. After looking into the rundown Sunshine Cabaret Club, Majima takes over as its manager.

In order to effectively run the club, players must manage a small roster of hostesses. Every hostess has a series of attributes measuring their style and personality. You can have a hostess with a high beauty level who loves to party or a funny hostess whose high talk stat makes them a natural conversationalist.

Players can select who is working on any given shift and then open the club for a Diner Dash style mini-game where hostesses must be matched with the right customer while Majima reacts to various hand signals to refill drinks or replace ashtrays. Earn enough money and you can engage in a Limit Break-esque "Sunshine Fever" mode where customers spend wild amounts of cash.

At first, the concept seems shallow. Collecting a team of women to entertain male guests creates a strange dynamic. The gender politics of assembling a hostess team and changing their clothing and fashion can feel lopsided in isolation. But as players spend more time with the activity, the cast begins to shine as a group of independent women. 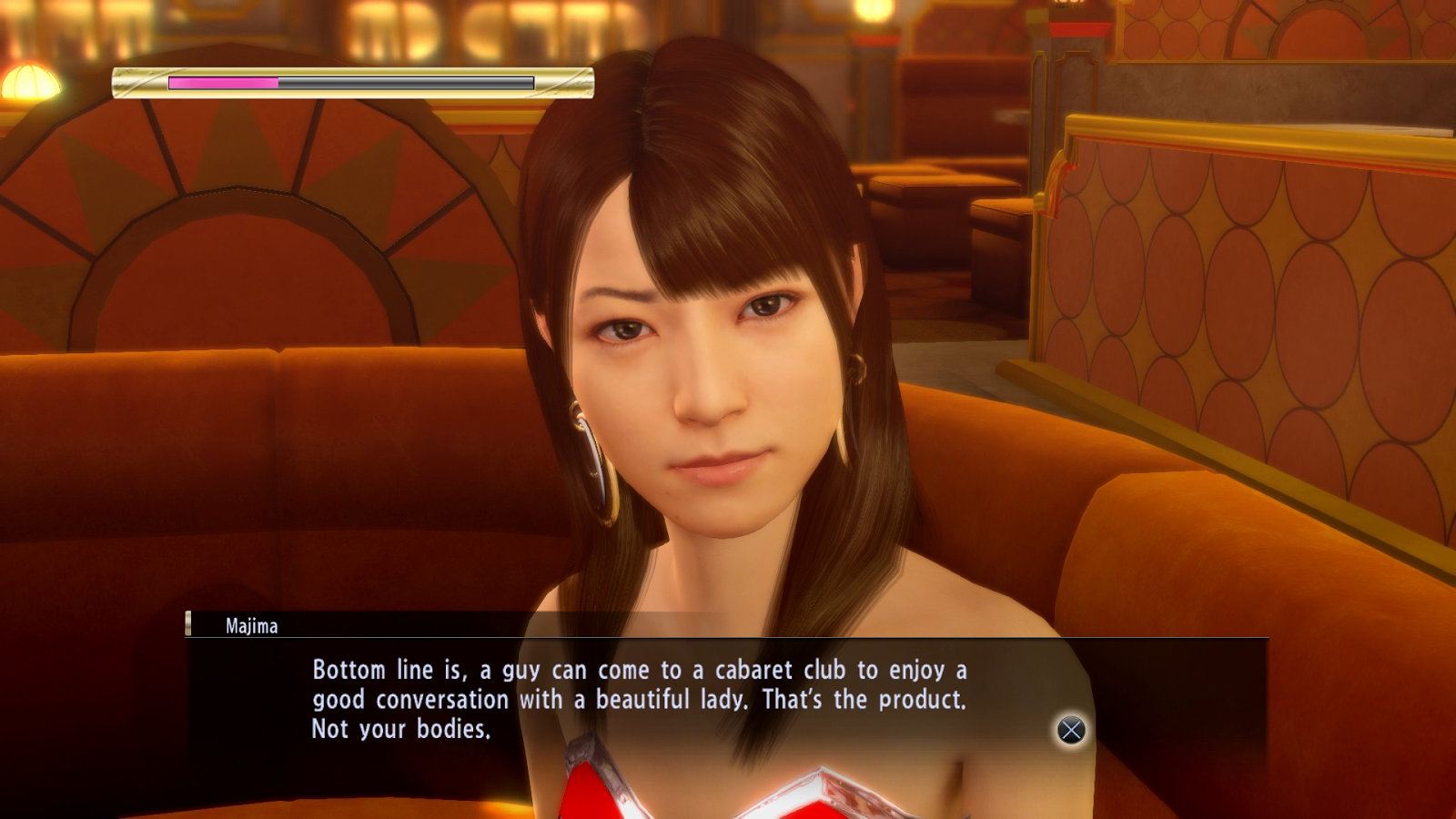 One way to increase a hostess' level and statistics is to sit and have conversations with them. These conversations are casual, and Majima treats each hostess as an intellectual equal. While some of the conversation focuses on how to serve guests, they often take on a life of their own.

You get to learn about each hostess' aspirations and personal life. Yuki, the first hostess you start with, simultaneously works to overcome her shyness while dreaming of a professional office job that can support her recently widowed father. Hibiki spends time learning how to draw manga.

These hostesses are not just random characters you collect; they are individuals with hopes and dreams working towards self-actualisation, and Majima has a zero tolerance policy for any customer who would dare treat them as anything less.

Earning enough fans will lead to rival battles against one of the Five Stars. In these competitions, the two clubs face off to see who will raise more money in a single evening. They are frenzied battles where swift and effective management is essential. Rival owners have various powers that can throw your team for a loop; they might steal some of your customers or lower your hostess' stats and make it harder for them to impress customers.

Reacting to these new disadvantages requires keen insight into what customers want and who on your staff is best for each assignment. Victories often come down to a small difference in total revenue. Eeking out a win over a crafty opponent feels amazing.

Each victory reveals more about your opponents, spinning a cautionary tale about the corrupting power of money and the lengths will go to in order to personally profit off the back of underappreciated laborers.

We learn how Club Mercury's owner Mizumura resorted to increasingly cruel practices out of desperation to keep his club alive as a promise made to his dying wife. We see how Club Jupiter's rough-and-tumble boss Kizuka found it easier and easier to fall into a spiral of criminal behaviour as long as the cash kept flowing.

It's not the most subtle story of worker exploitation, but the broad delivery fits in with Yakuza 0's soap-opera style.

Cabaret management in Yakuza 0 is a microcosm of everything that makes the game great. It combines the high stakes and strong character writing of the main story with a bright and compelling arcade game. On my first playthrough, I completely ignored cabaret club management. It was a huge mistake. Leaping into it on my second playthrough revealed a great side activity that made one of my favourite games of the year even better.