When an explosion at the Astral Academy scatters nine magical parchments to the four winds, a group of irresponsible students sets off on an adventure to retrieve the lost magic for their own mischievous use. At least it should be a group.

Action RPG Nine Parchments can be played alone, but where’s the fun in that?

It was nice of Finnish development studio Frozenbyte to include a single-player mode in their new game, but they really shouldn’t have.

When played alone, as I did in my first few hours with the game, Nine Parchments is a pretty basic spellcasting action RPG. You advance through a series of gorgeous fantasy environments, blasting enemies with various elemental magic attacks.

There’s some strategy to figuring out which spells work best against which enemies, but once that’s worked out combat becomes rote. Levels are a series of encounters, interrupted by the odd boss fight or arena-style battle.

Playing Nine Parchments by yourself isn’t very exciting. In a pinch it’s a good way to collect power-enhancing hats and staves (the game’s got a bunch of them) or unlock additional characters (only two of eight are available at the start of the game).

It’s easy to appreciate the game’s beauty when playing alone – it’s quite pretty, and the music is delightful. But mostly I consider single-player mode to be training for multiplayer, the main event. 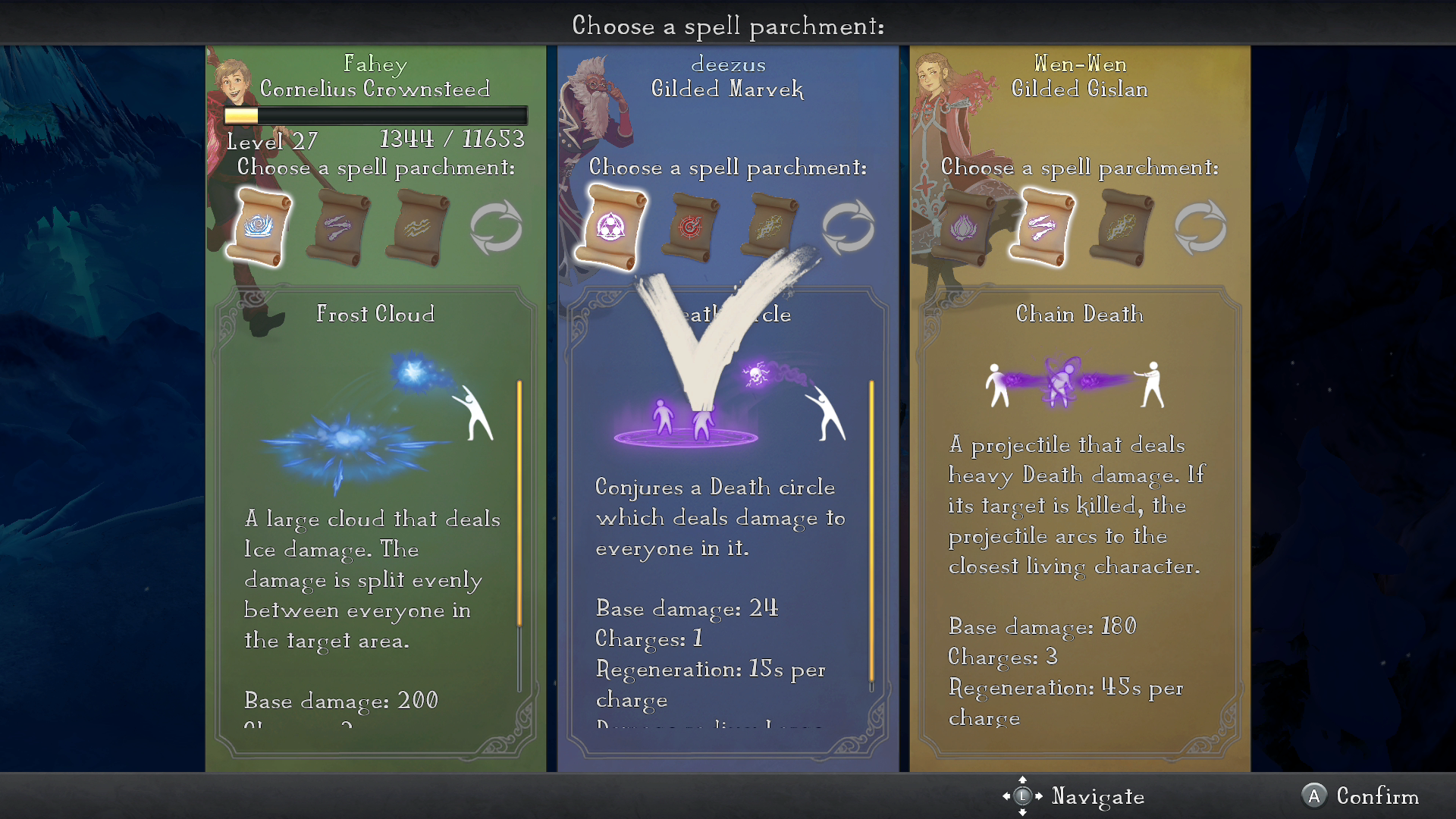 The are 49 different spells in the game. Players begin with three. When a parchment is found, each player gets to choose one of three randomly selected spells to add to their spell wheel. The chances of finishing any two games with the exact same spellbook are very slim.

Playing Nine Parchments with other people is a blast, often literally.

Trekking across fantasy landscapes is much more exciting when you’ve got several robed companions casting spells at your side. When two to four players are casting powerful destructive spells in a confined area, some “friendly fire” is bound to occur.

Also, depending on who you’re playing with, “unfriendly fire” is a real possibility.

From the first multiplayer match, it’s clear that Nine Parchments was designed to be played with a group.

It’s in the way two players can angle their beam-style spells together, creating a more powerful attack. It’s in the ability of players to resurrect each other in combat, as opposed to the single resurrection granted in single-player mode. And it’s in the way that an otherwise routine combat encounter becomes a massive cluster-fuck as four players let loose with beams, bolts, clouds of deadly poison and whirling, fire-spouting totems.

Watch ’til the end to see who got the most ally kills. Hint: whoops.

It’s not always perfect. An early boss battle that I easily cleared solo became a deadly comedy of errors as four players attempted to dodge gouts of flames and raining poison easily avoided by a single person. But I had a lot more fun dying with friends than I did triumphing by my lonesome.

Other people make the game unpredictable and invigorating. Just when you think you have your fellow players pegged, along comes one of those titular parchments, allowing players to add a random new spell to their shoulder button-controlled selection wheel, multiplying the chaos. “Phew, Johnny finally figured out how to stop freezing us. Oh, now he’s setting us on fire.”

Adding more spells to the wheel can be a little confusing. I spent the first 15 minutes after getting my first healing spell accidentally not-killing people. The mayhem really helps tie the game’s story together. Set in the same world as Frozenbyte’s Trine series, Nine Parchments is a game about a group of wizard students deemed unworthy to wield high-level spells taking their higher learning into their own hands.

These eight characters are supposed to be ill-prepared and untested. The pandemonium caused by multiple players firing off spells all at once really drives that narrative home. Played through a quarter of the campaign by myself, quite bored. Switched to multiplayer for the rest and had a much better time. Played about 12 hours, unlocked the cat guy. Hooray for cat guy.

That’s not to say there’s no room for teamwork. Late last night I joined a game with a single stranger, and we played for hours.

The going was rough at first, but eventually we established a rapport. When we died in a tough spot, we’d cycle through available spells, using their icons to communicate rudimentary strategy.

The session culminated with a character-unlocking side quest that required a player be sacrificed in three different locations. I hit my partner with a couple of flame bolts to get his attention, then used my own spells to kill myself in one of the locations. He resurrected me, and then helpfully murdered me in the other two spots, completing the quest to unlock the death magic wielding cat, Rudolfus the Strange. It was a magical moment. 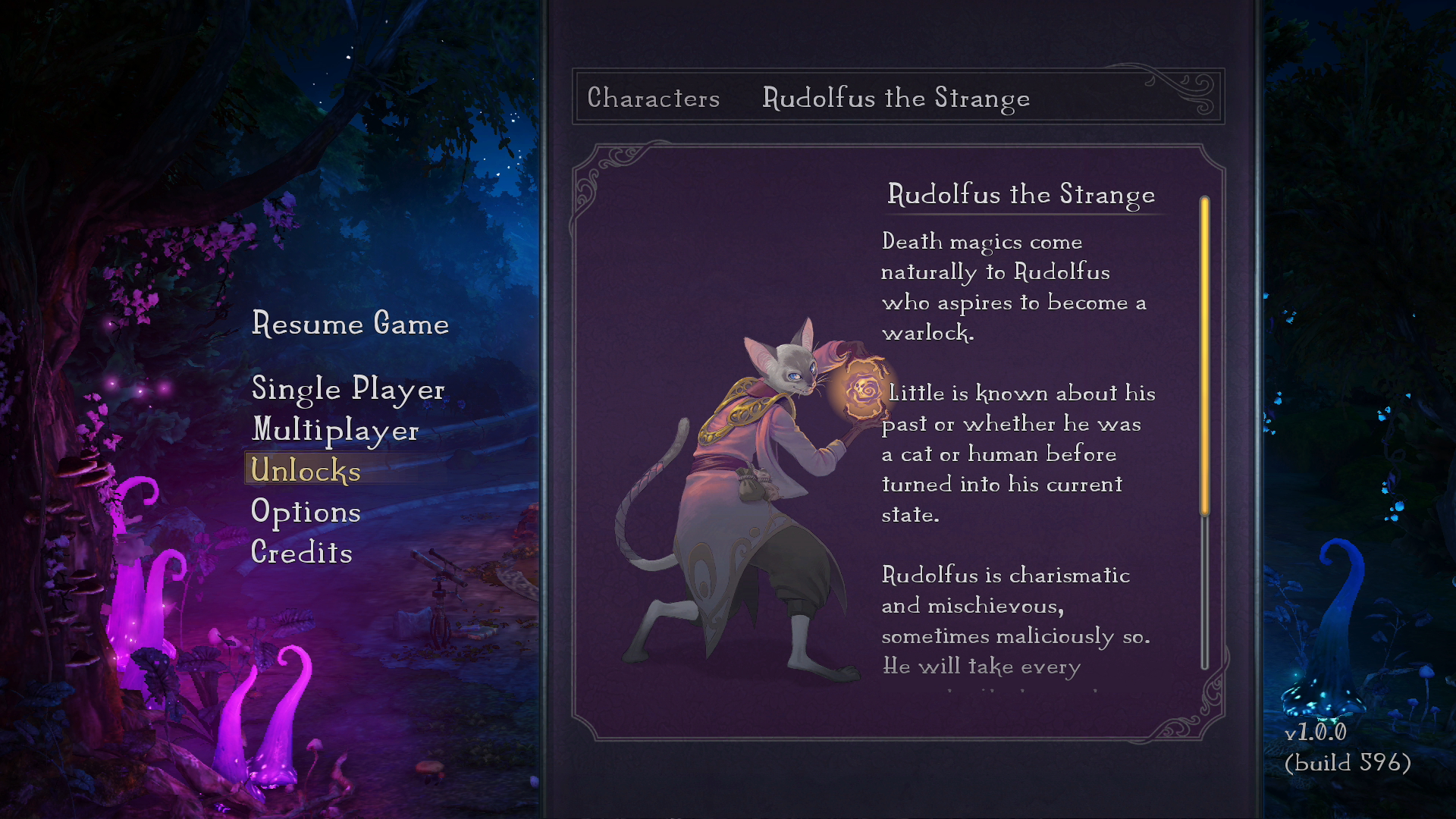 He’s a death cat. I had to unlock him, if no one else.

Teammates also help draw attention away from some of the game’s odd design choices, like having a campaign consisting of 32 levels that can only be tackled in order. Despite player character levels being carried over from game to game and quests to unlock additional characters scattered throughout the campaign, there is no level select.

The workaround to this is joining a public game, where the level currently being played is displayed, but it’s far from ideal. There’s no way to continue a private game once it’s interrupted – resuming a multiplayer game after stopping turns it into a public game.

Fortunately a fix for my biggest issue with Nine Parchments is on the way. Currently you can only have one game in progress, solo or multiplayer, and switching game modes resets campaign progress. You’ll still have your levels and equipment, but your character will start on the first level with their three starting spells. Frozenbyte has a fix in the works, and soon players will be able to access a list of in-progress games, picking up where they left off. 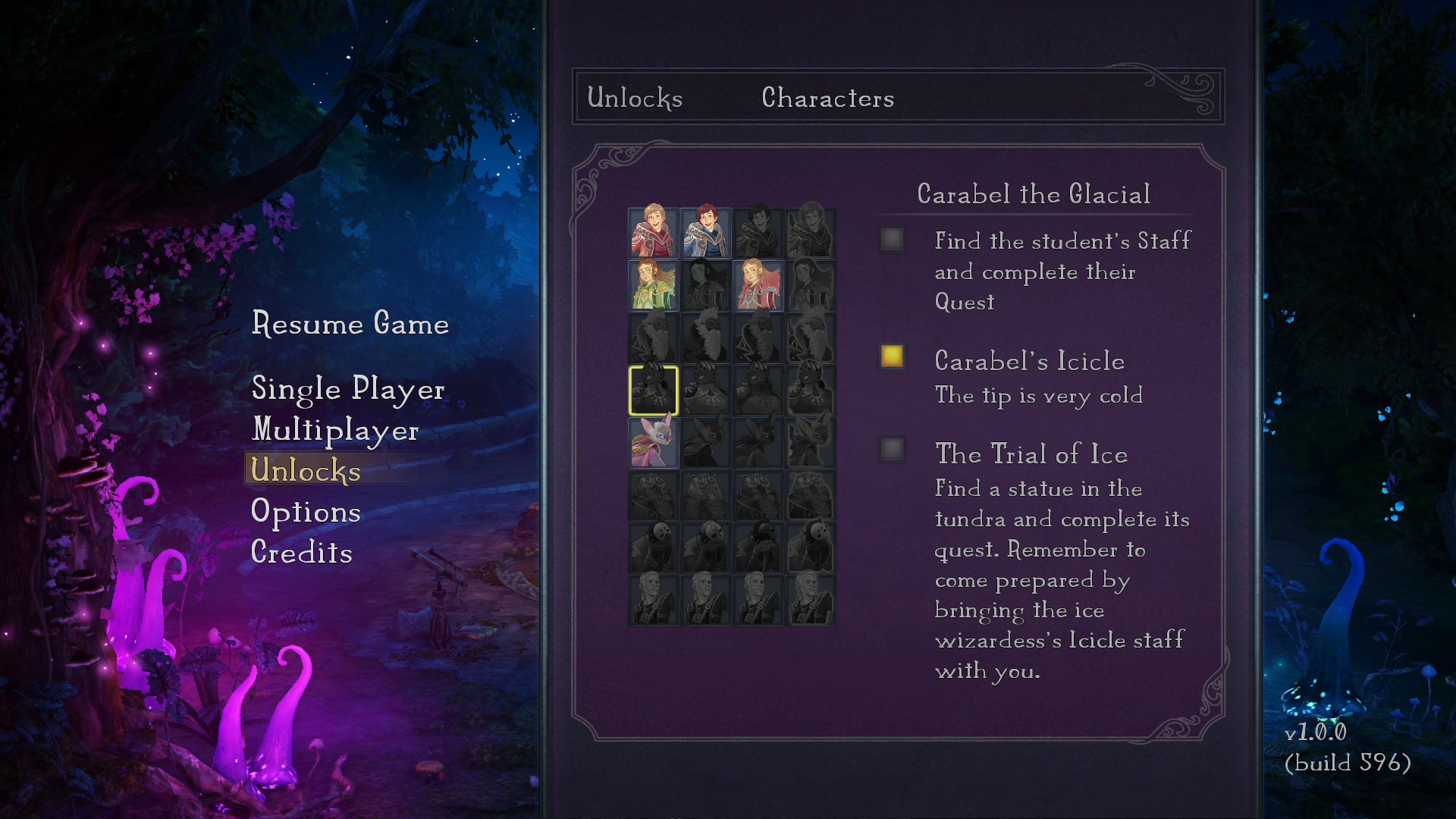 There are eight characters to unlock in all, each with four different variation with different starting spells.

It doesn’t have the humour that defines Paradox’s series, and there’s not a lot of personality beyond some some basic narration and random bits of character dialogue. But the magic focus, the “accidental” player killing and the spell-combining mechanics are all there.

I’ve seen people go so far as calling Nine Parchments a Magicka clone. I can see where they’re coming from, and that’s fine – the world could use a little more Magicka.

If you’re planning to venture into the magical world of Nine Parchments, heed my words: It’s tedious to go it alone. Take friends. Maybe wear some fireproof gloves. Special thanks to PlayCritic for an outstanding two-player session.