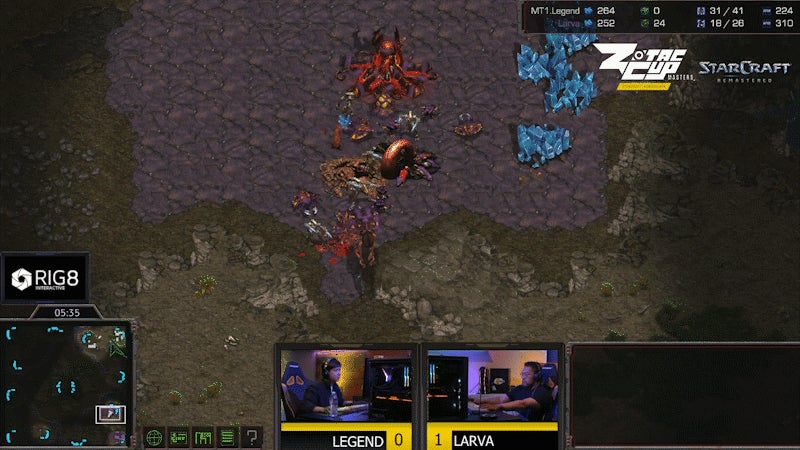 Lim "Larva" Hong Gyu proved last night that he can win a StarCraft: Remastered match with his foot. During the finals of the Zotac Cup Masters Showmatch, Larva made quick work of his opponent's base, and in the game's final moments, he lifted his bare left foot onto the keyboard to tap in a few final button presses.

Larva's right hand stayed on his mouse the whole time, and by the time he lifted his foot to the table, his opponent had no way of catching up to him. Larva was just showing off. And this was far from the only taunting that Larva dished out over the course of the finals.

The taunting started during Larva's first match with his unwitting opponent. Larva pulled one of his worker units away from his base and made it dance by clicking in quick circles around the unit. That's like playing StarCraft with one hand tied behind your back - it's like saying, I don't even need all my worker units to beat you.

During the break before the second match, longtime StarCraft commentator Sean "Day9" Plott noted Larva's reputation: "Larva's a showman, and historically, in Brood War, some people are showy but they can literally never back it up... Larva is spectacularly good, and that game was a great demonstration of it. That was just so much bravado!"

Far more bravado was yet to come, though. In the second match, Larva pulled out the foot move:

During the third and final match of the finals, Larva pulled out his grand finale of dickishness: Taking a nap during the match. The act began with Larva flattening himself into a lazy, reclined position in his chair, his hands stretched far out in front of him. Then, right after destroying one of his opponent's bases and sending his units on to the next one, Larva took his hands from his keyboard and mouse and pretended to doze off for a few seconds.

Over the course of the past year, Larva has become one of the best Zerg players of the StarCraft: Remastered scene. His meteoric rise feels deserved, given that he's been clawing his way up the ranks since 2010. Back then, he served as a second-stringer and practice partner for pro teams, but never made it onto a roster himself. By 2012, the Brood War competitive scene had all but died, while Larva kept plugging away at what few tournaments remained.

Larva's problem? He couldn't win under pressure. He could perform well in low-stakes matches on his Twitch channel, but high-level tournaments made him choke. When StarCraft: Remastered came out this year and reignited the scene for Larva's game of choice, he decided to make a big change: ham it up and play the part of an arsehole.

Last September, Larva dyed his hair and beard red and pretended to be his "role model," UFC champ Conor McGregor. Larva played better than ever that day, his usual nerves nowhere in sight.

Larva's not dyeing his hair anymore. But he's still pretending to be a cocky piece of shit, and it's working. Larva only dropped one game over the course of the Zotac Cup Masters Showmatch yesterday, and he ended up taking home the $US10,000 ($13,165) top prize.

Pretending to be an arsehole in order to shake off nerves doesn't seem so different from actually being an arsehole, though, so Larva might want to watch his back.