What It's Like To Watch Overwatch At A Bar 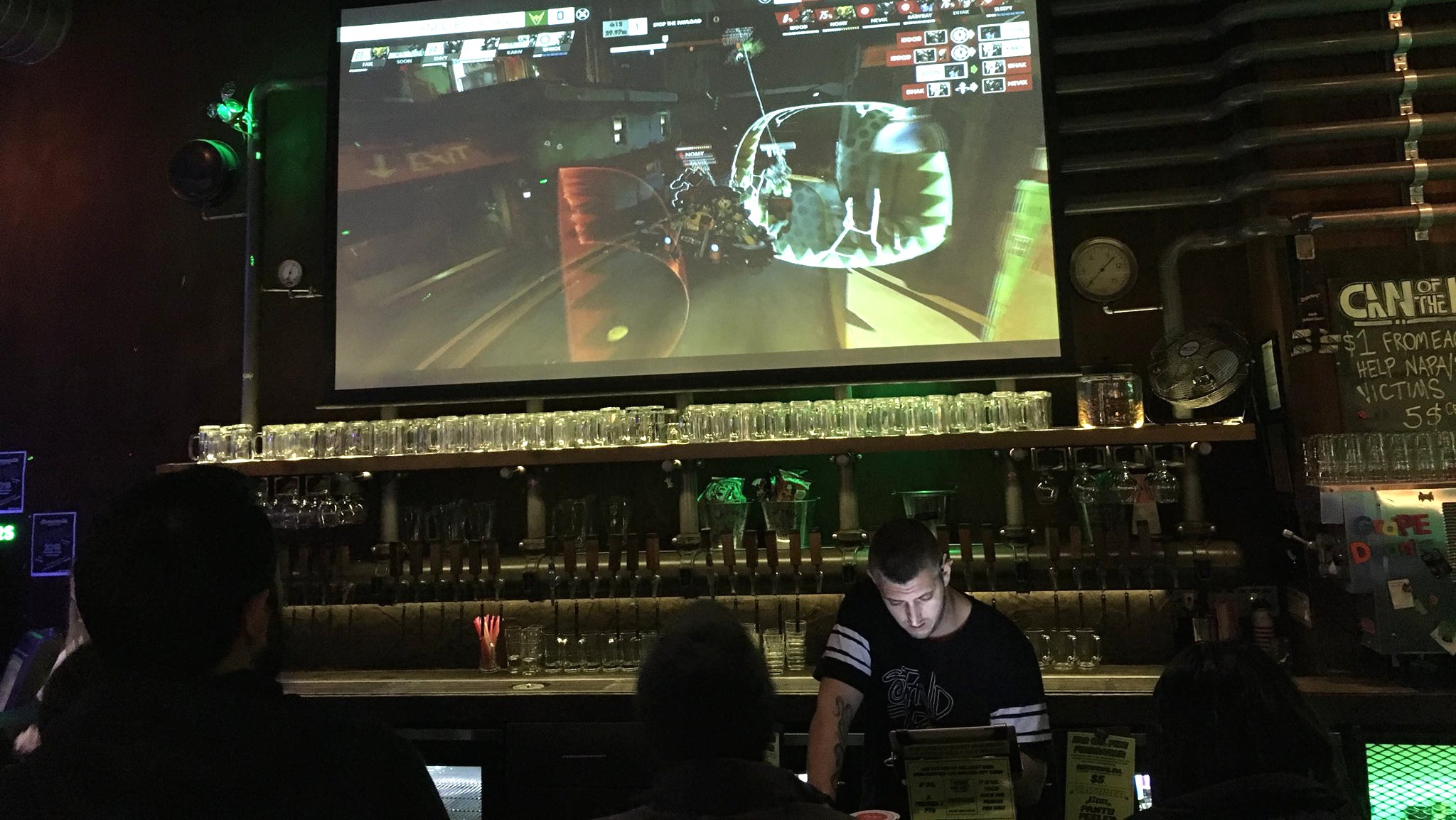 Self-described Deadspin "doofus" Patrick Redford and I ventured there to see how the experience stacked up against watching The Big Game at a sports bar. We survived, but at what cost?

Nathan Grayson: Patrick! We watched a couple of Overwatch League preseason games in a bar. Or a "brewcade", as somebody who probably didn't have many friends decided to call it. Despite Overwatch League's newness and the lack of much info on teams outside diehard fan circles, did things feel sufficiently Hype to you?

Patrick Redford: Despite the apparent bafflement of the barkeeps and some unfamiliarity from most everyone on what exactly the San Francisco Shock are, the Hype was palpable. I spent too many of my formative years watching basketball and other "tsports" in bars, and I was pleasantly shocked at the energy of a live Overwatch League watch party. 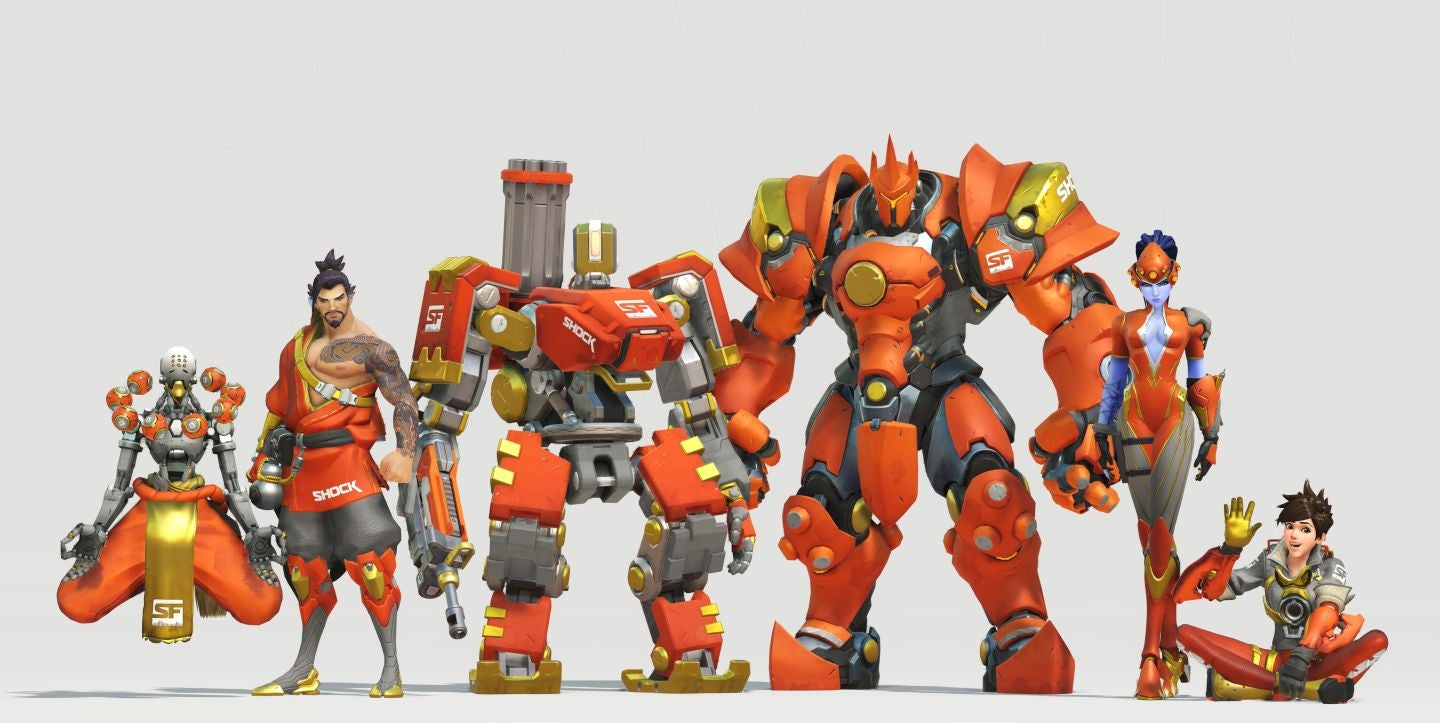 Nathan: Yeah! Bar folk cheered and even chanted mean things about the Los Angeles team. Back when Overwatch League was first announced, people were extremely sceptical of the idea of adding a city-based structure to esports, which have traditionally been focused on endemic organisations rather than particular locations, but this seems to be doing it for people. The fastest way to make somebody care about something is to make it about them, and this seems to fit that bill.

The question is, will it be enough to make people who aren't already super into Overwatch give a shit, and will it keep them around beyond first-blush curiosity? Will they follow the sport? I noticed, for example, that The Hype crashed into the side of a mountain as soon as SF Shock got done playing. Nobody really cheered or paid a ton of attention during the Seoul vs. Shanghai match, even though Seoul is probably the best team in the whole OWL.

Patrick: It's acutely interesting to watch OWL try to find its wings, since it represents the first real stab an esport has taken at Making It Big, an eventuality that it seems the press has predicted for a decade. The broadcast was slick and the commentators were on top of any strategic moves or shifts in the battle, though it's clear that they still need to work some kinks out. The primary difference between OWL and, say, football is that people already have a baseline physical vocabulary for the building blocks of football. We know what is it to throw a ball or jump.

In contrast, OWL is probably inscrutable if you haven't played Overwatch. The learning curve is so much steeper, and that limited audience pool is the largest impediment to this thing going mainstream. The watchability improvements, such as making team colours more distinct, are helpful, though being able to distinguish a Los Angeles hero from a San Francisco one is still far easier than considering a team's ultimate stacking. But, like you mentioned, I find sports much more engaging when I feel I have something at stake, and while high-level Overwatch (such as the Seoul team's masterclass) is fascinating, having a home team is much more enthralling. There was even a "BEAT LA" chant! 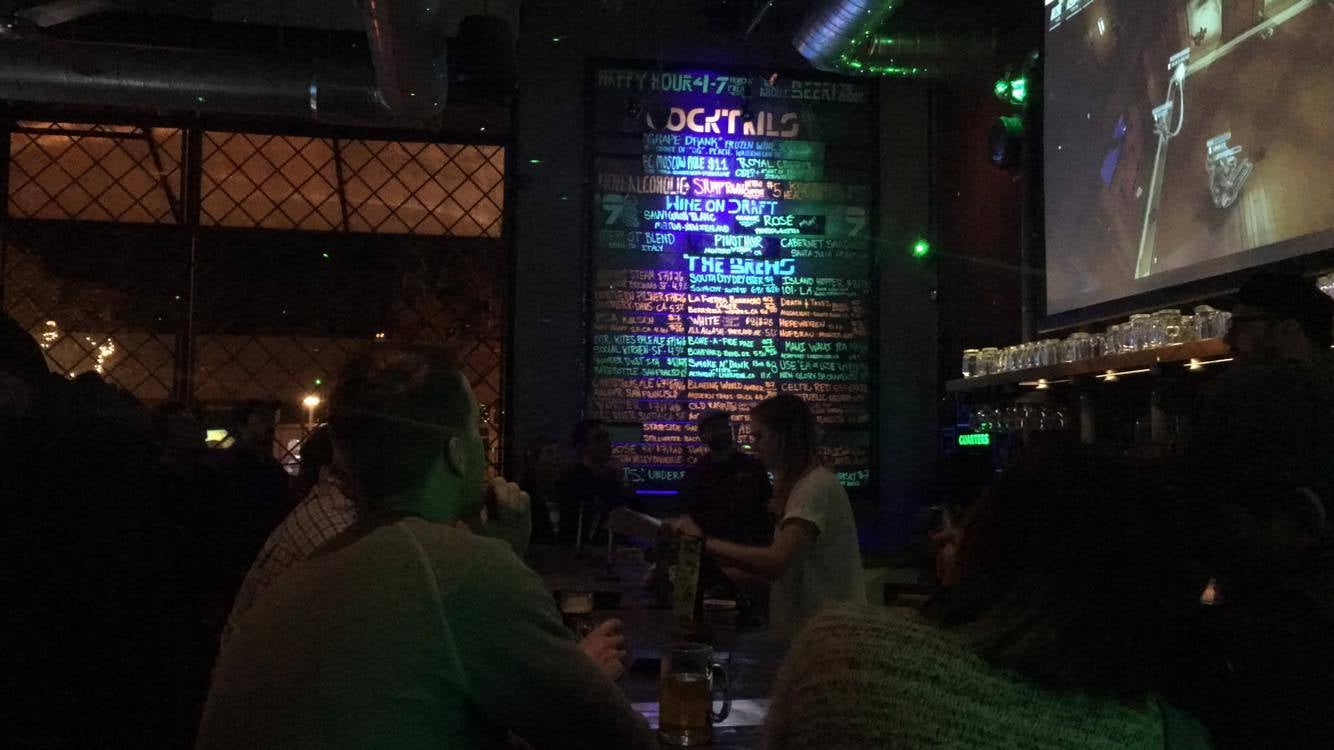 Nathan: For sure. Another thing to consider is that it's harder to really enjoy high-level play in a bar. I don't know about you, but I had trouble hearing the commentary at times, and you need commentary while watching pro Overwatch. There's a lot the commentators catch that viewers just can't, and replays with analysis are pretty essential to the overall narrative of a match. Even as somebody who knows the game well and has followed the pro scene for a while, being in a loud, crowded bar made following along a little more difficult than I was expecting.

It's a trade-off, though, I suppose. You get the fun of a bar crowd, but you can't appreciate the finer details quite as much. I've experienced a similar thing while watching UFC fights at bars, though it's much easier to understand the ramifications of a punch to the face than those of a switch from Zenyatta to Moira.

Patrick: Yeah, there was that one time when a pair of dovetailed D.Va and Tracer ultimates took out four heroes and the broadcast was... elsewhere.

Nathan: I got the impression, though, that people were broadly able to recognise big moments, even if they didn't know exactly what they were seeing. The energy of the broadcast and the room would pick up, and you could see everybody kinda snap to attention and start cheering. 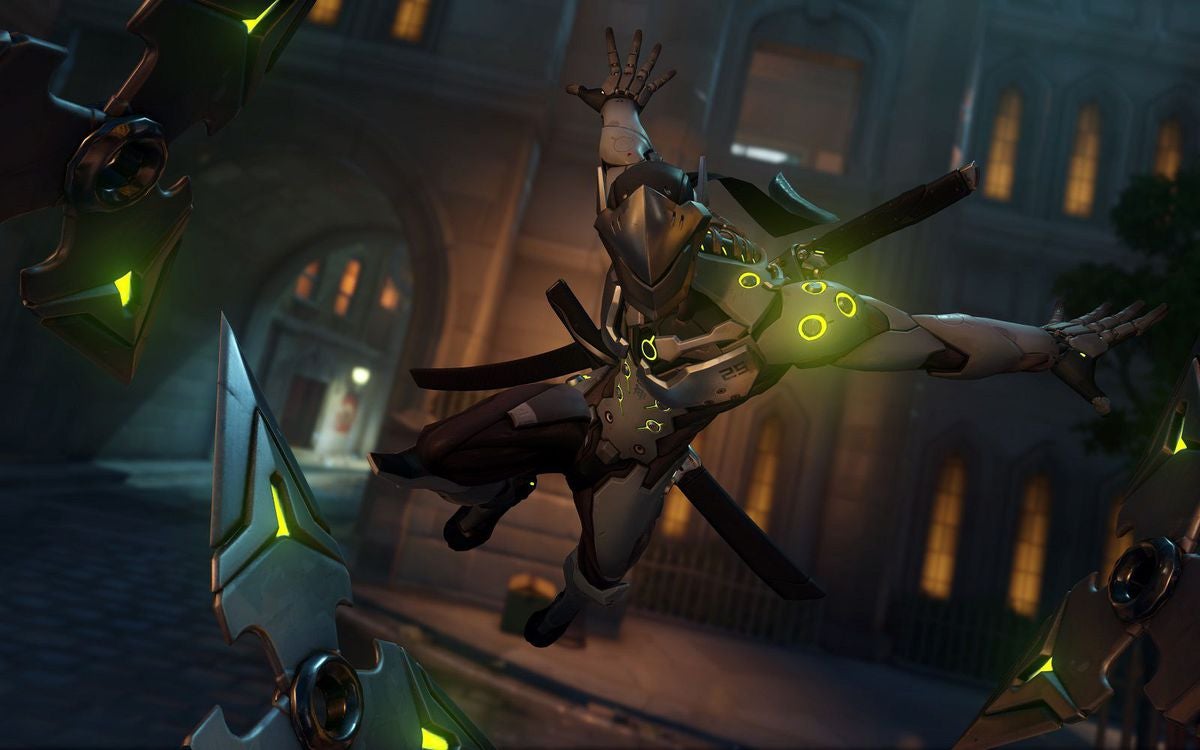 Patrick: It was legitimately exciting to watch Overwatch on a big screen and feel the rumble of a speaker as teams buffeted each other with attacks. At the ends of matches, when overtime seemed to stretch or a payload needed to budge less than a meter, the atmosphere in the bar felt akin to the end of any close game in any sport. There was a moment when a Los Angeles Genji sliced through half the San Francisco team and nullified a big push, and when half the bar groaned, it was like watching your favourite soccer team's striker whiff a penalty. People got way into it.

Nathan: Man yeah, that was brutal. Poor SF! If only they'd had their teens!

Patrick: The absence of San Francisco's best two players, who can't play yet because they're both 17, was something the event's organiser noted when I was talking to him. Even though the team wasn't quite at full strength, I didn't mind, and even found it an endorsement of the OWL's potential. The on-screen product isn't terribly diminished without an elite DPS teen in the way that an NBA game would be if, say, LeBron James was out with an injury.

Nathan: Yeah, Shaquille O'Neal, who partially owns the team, did a good job when he personally handpicked all the players for his Overwatch team, SF Shaq. Props to him (or, you know, whoever actually picked the players).

One thing we haven't fully addressed, though, was the location. This was a video game bar, and so even if not all the viewers were necessarily Overwatch players, the level of general video game literacy was higher than it would probably be in a normal bar. I imagine that helped a lot of people get into the game. I doubt that it would have fared as well in, say, a regular ol' sports bar. That said, I did watch EVO, the big fighting game tournament, in a more traditional bar one year, and that shit was hype as fuck. But again: Punches to the face are easier to understand than crucial off-meta picks and the brief return of your dearly departed son, Lucio. 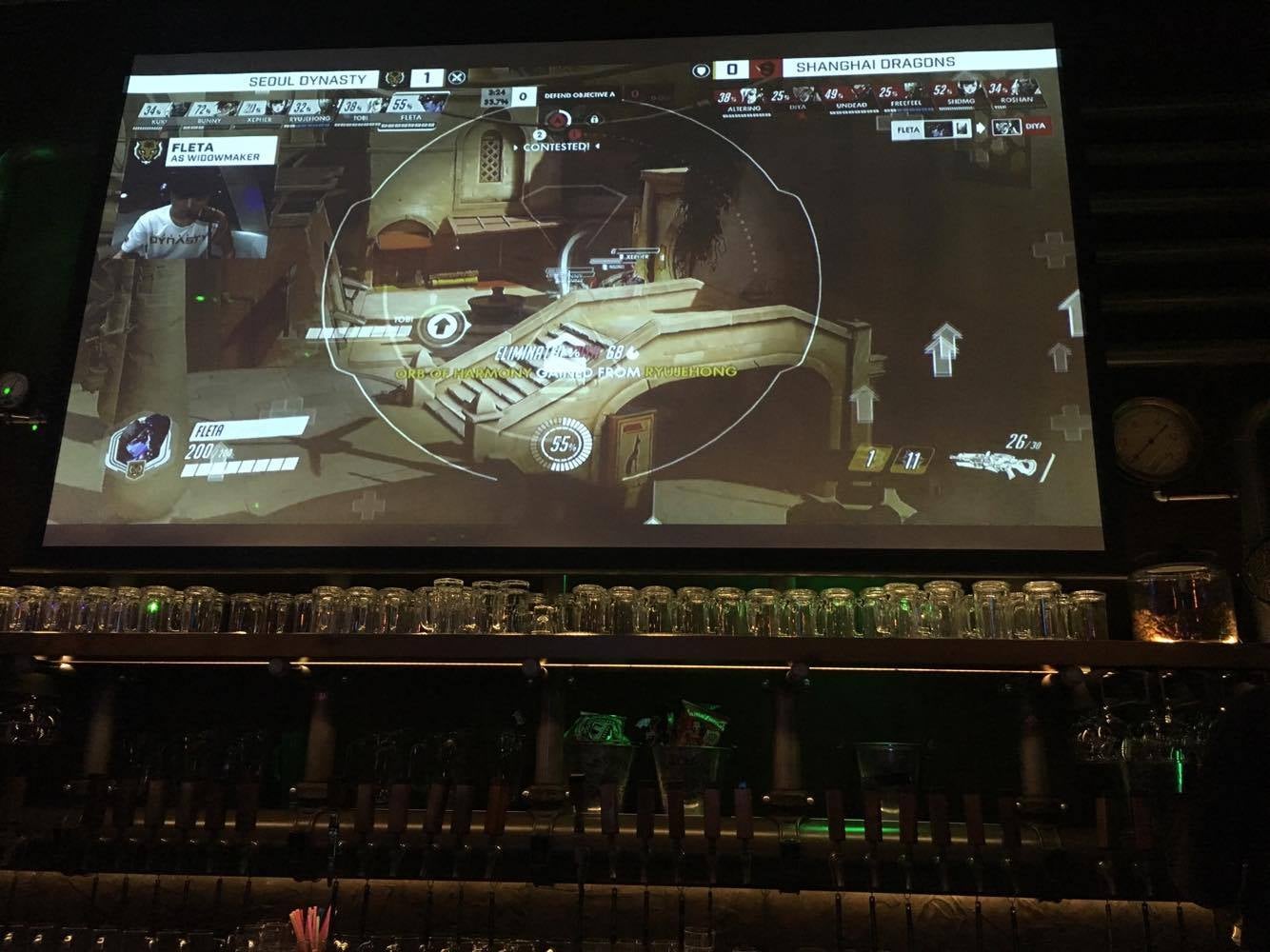 Patrick: "OK so he's a DJ, but he also shoots sound bullets out of his speaker gun."

Nathan: "And she's a time travelling ex-jet pilot who's tethered to our reality by a chrono device made by an ape from the moon. Also, she's British. Easy enough, right?"

Patrick: For all the strangeness about going to an actual bar to drink actual beers to watch virtual cartoon people (and a few robots plus one monkey) shoot each other with scrap guns and energy orbs, it fit in surprisingly well. I'll go back when the real season starts.

Nathan: Me too! I've been to a handful of esports events in actual arenas, and this captured a lot of the energy of that, but without all the hassle, expense and travel. Also, it's a bar, so you can just chill and talk with people about the game during half-time or whatever. It all felt momentous, but also intimate and homey. I'm beginning to think that Overwatch will always be a bit intrinsically confusing to watch, but I'm glad the bar we went to is gonna make a regular thing of this. I'm excited to go back and yell about how LA is bad and should lose some more.