There are moments in Bayonetta 2 that are such a visual feast, I wished I could slow everything down with Witch Time. Fighting an onslaught of demons and angels with hundreds of explosions assaulting the screen, I loved how Bayonetta always keeps her cool.

What I didn’t expect was that the convoluted story, with some admittedly absurd plot twists, actually had some very interesting ideas on morality and religion. 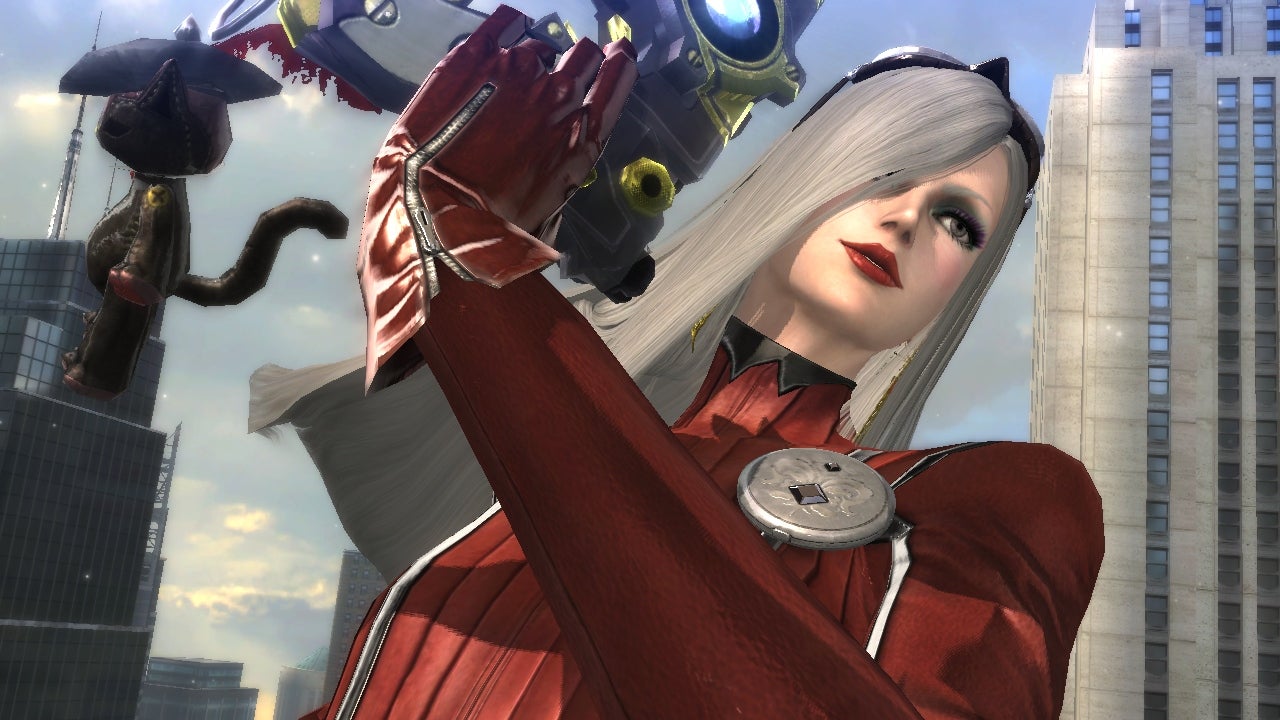 The first Bayonetta‘s principal story is about identity, how the amnesiac witch tries to find out her true origins after she’s lost her memories. In the sequel, the journey begins as a modern take on Orpheus, only with huge guns instead of lyrical harps. Bayonetta’s best friend, Jeanne (who’s also the former heiress of the Umbra Witches), has her soul captured by demons. This means Bayonetta has to go down into the Inferno and rescue her.

Bayonetta expresses herself through bullets and blades, eviscerating demons with torture devices and massive bombardments of hair. A big part of Bayonetta’s charm is that nothing fazes her and she always has a witty quip to throw back at her ridiculously massive enemies. This would be a survival horror game if it wasn’t so funny and Bayonetta wasn’t revelling in her wickedly powerful Umbran Climaxes.

“Fan service” aside, the animation is superb. I’m a character technical director in my day job, so I’m always looking at 3D characters from the perspective of their models and rigging. The rigging is top notch as she hits poses that I know are really difficult to achieve through regular animation controls and skin clusters.

Violence has never been so eloquent, with strange monsters that take up half the screen presaged by literary tomes describing the damned. There’s also the awkward, but hilariously timed, entrances from Luka, whose presence is totally unnecessary, though humorously welcome. 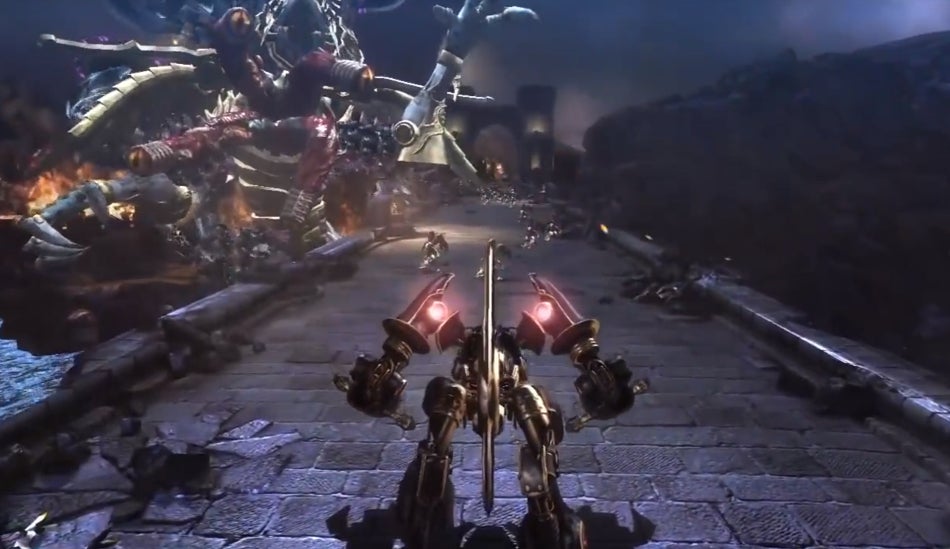 Luka aside, every scene feels like it were a set piece. The action is analogous to a roller coaster if it had rockets and was doing corkscrews with every revolution, hundreds of bullets, of course, firing your way. Those who know my writing know I love mechas. That’s why one of my favourite sections was chapter XIV where Bayonetta uses Umbran Armor – essentially witch mechas – to take down the angelic invasion force who’ve begun their Witch Hunt (it was super cool to learn that the mechas paid homage to both the armour suits from Mega Man X and the Magitech Armor from Final Fantasy 6).

What surprised me was that the story quickly evolves from a journey into Hell to an arc in which Bayonetta comes to terms with her father’s evil. Balder, the Masked Lumen and Bayonetta’s father, was the main villain in the first game. He tried to to resurrect the god Jubileus so that he could remake Paradiso in his own vision. In Bayonetta 2, we learn he was driven mad after the death of his wife at the hands of the God of Chaos, Aesir.

Bayonetta meets a younger Balder who’s been brought to the present via time travel. At first, they clash in intense combat and their fights are some of the best in the game. It turns out he’s in pursuit of a young boy named Loki. Loki, who gets his name from the Norse god, is a brash kid who seems to be getting in trouble every other scene. Bayonetta, ever the guardian angel despite her witch past, decides to protect him from the sage.

A leap to the actual past via the Remembrances of Time causes Bayonetta to meet her mother, Rosa. They fight together as the Witch Hunts break out. It’s a touching moment as the two team up and Bayonetta’s mother kicks some serious arse. Their combined power proves too much for most of the angelic hordes. Unfortunately, the angels win by sheer volume. It’s devastating to watch the massacre of the witches that resulted in the permanent divide that still mars the world hundreds of years later. When her mother is killed by someone who appears to be Loki and neither Bayonetta nor Balder are able to stop it, we experience one of the most painful moments in both their lives.

But Loki isn’t the culprit. As we learn, Loki is actually only one half of the god of Chaos, Aesir. Many aeons ago, Aesir believed that the best way to create balance in the chaos of the universe was to split both his power and his soul. His strength was channelled into the Eyes of the World, the Left Eye held by the witches and Bayonetta, and the Right Eye by the sages and Balder, so that they could always offset each other. Likewise, he split his personality with the good side in Loki and the darker half in Loptr, who’s the one who actually killed Rosa. 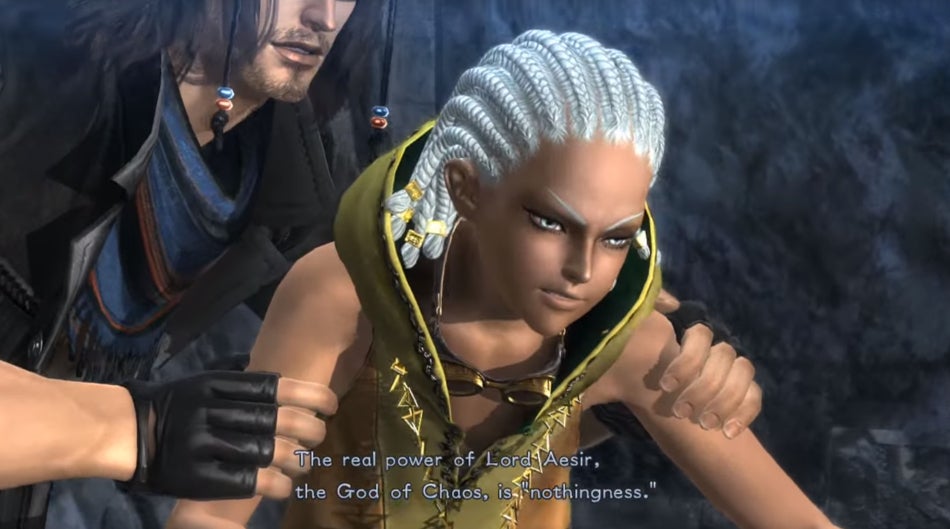 When Loptr overpowers both Bayonetta and Balder and absorbs the power of the Eyes into his own, all seems lost. That’s when Loki reveals Aesir’s true power, “nothingness”. He destroys both Eyes, releasing all of that power back to the world which will prevent it from being controlled by any single being. At a deeper level, it’s also about the binary divisions of “good” and “evil” that bind humanity. Only in their destruction can free will actually take place. There are no simple guides where the angels are monstrous or the witches and their demons fight for justice. Those divisions have to be annihilated from existence so people can make their own choices without the noose of a hypocritical morality to constrain them. As Loki realises, we often associate chaos with something negative when it’s something we shouldn’t necessarily fear. Nothingness isn’t a bad thing.

The game’s ending made me question what a world without religion would look like. It’s interesting to note that Balder’s descent into the the fanatic authoritarianism of the Ithavoll Group from the first Bayonetta began in tragedy and a desperate attempt at finding resolution/vengeance. Human suffering is at the core of many religions, and the attempt to find some kind of answer, no matter how illogical it might be, will always draw people towards creeds that attempt to fill that void. 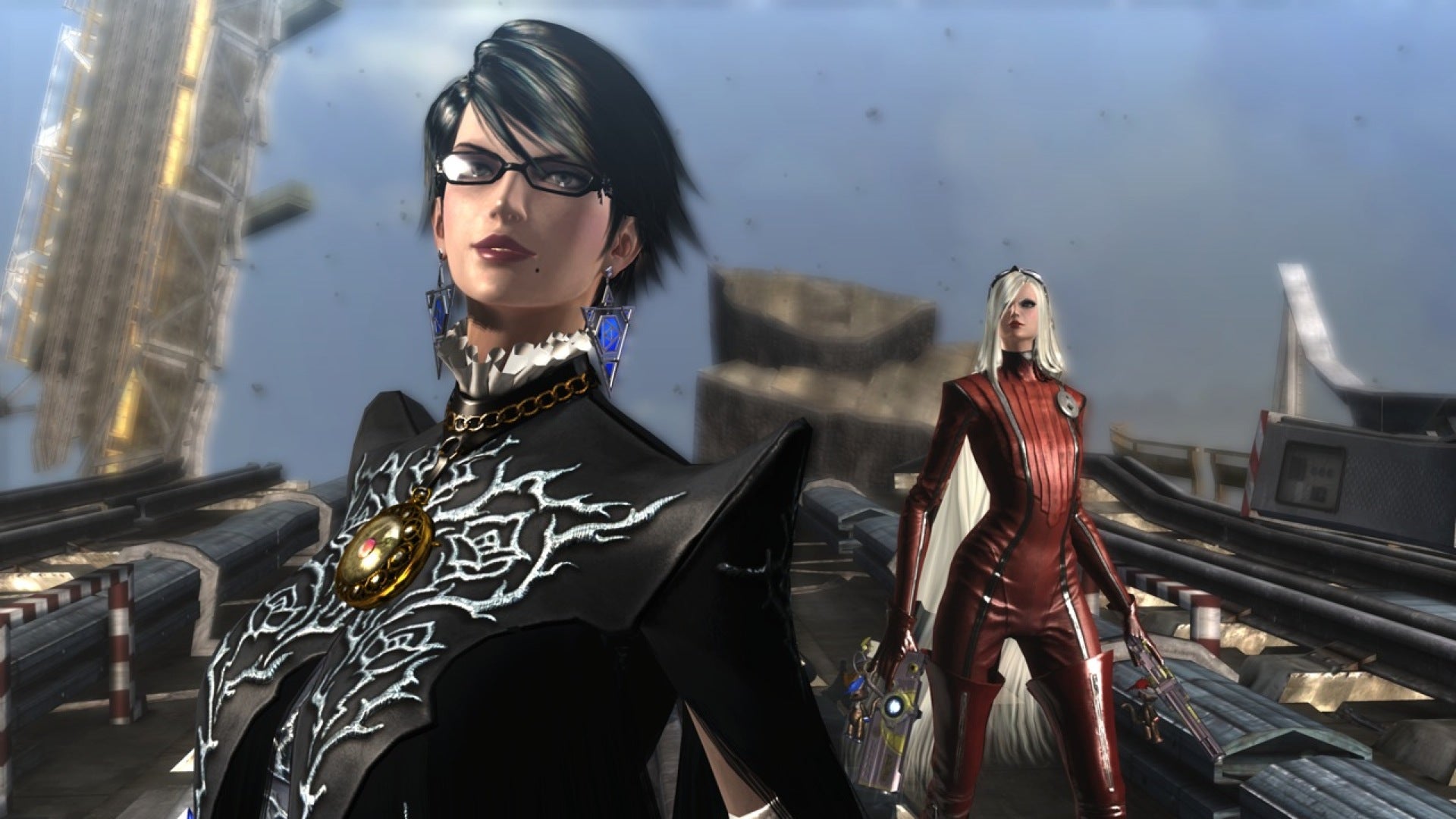 This is why Bayonetta stands out even more. She’s suffered innumerable tragedies, but remains true to herself through it all. She doesn’t find easy crutches, but relies on herself (and her guns). Her confidence and self-assuredness mark a powerful contrast to everyone around her. When a terrible tragedy strikes in the death of her friend, she doesn’t mourn her or get consumed by sorrow. She immediately launches herself into the pits of Hell to rescue her.

With the game re-releasing on Switch and a sequel coming soon, I hope many more gamers can experience Bayonetta‘s adventures, not just for the awesome action sequences, but the surprisingly compelling story as well.