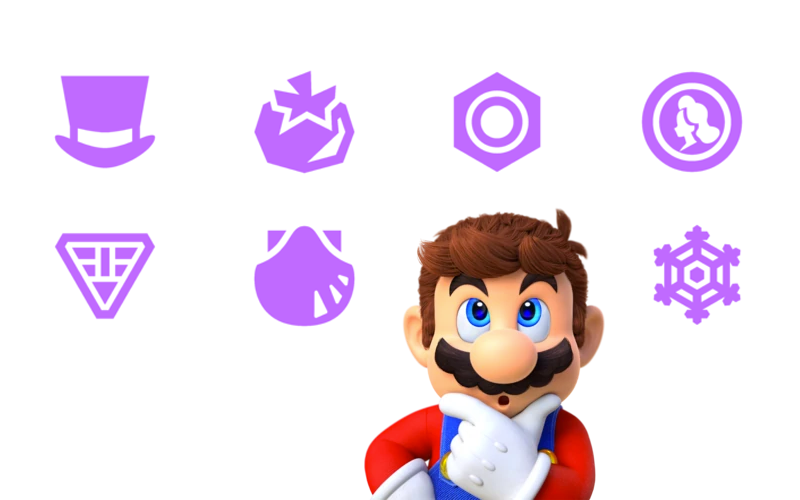 There are plenty of classic gaming icons associated with everyone's favourite pudgy plumber. Mushrooms, stars, turtle shells, and more come to mind when picturing Mario and the magical world he inhabits. And though many different Mario items and collectibles have been featured throughout his critically acclaimed adventures, there is only one that has officially made an appearance in every single game - coins.

From his original Mushroom Kingdom outing on the Famicom to his most recent trip around the globe, Mario titles have always provided players with plenty of shiny currency to collect. While they initially provided bonus points and extra lives, the coins in Mario have evolved into a rainbow of hues, shapes, and uses over the years.

Many aspects of Mario's newest journey in Odyssey stray from the established norm, and that goes for coins as well. Unlike every main series Mario game of the past 30 years, Odyssey doesn't have lives for Mario to gain or lose. Death not longer has a limit, but a price. Players lose ten precious gold coins every time they kick the bucket. Coins can also (finally) be used to purchase extra outfits that become available as players advance throughout the game's many kingdoms. This new incentive to scoop up coins is a welcome change, one that breathes new life into a classic aspect of the Mario franchise. 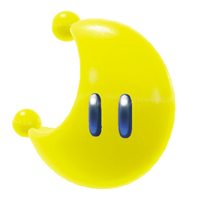 On the other side of the collectible spectrum we have Power Moons, the essential fuel for Mario's hat-shaped flying machine. Obviously the most important item for progression of the game, Power Moons open up new kingdoms and help players further the on-going story.

There's also a ridiculous amount of them.

While games in the past gave Mario just over 100 stars and shines to collect, Odyssey has 880 Power Moons (999 if you want to buy some extra) scattered throughout its many worlds. It's an overwhelming number of seemingly crucial items, and the games does a bizarre job of hiding them in each environment.

It's certainly satisfying to find a Power Moon, but it can be equally as aggravating to decipher its whereabouts. Some moons can be spotted sitting atop tall buildings or dangling below out of reach ledges, giving players a concrete goal, while others are unlocked by seemly arbitrary actions like... sitting on a park bench. It's wonderful that the game has so much content in this regard, but it's almost too much. 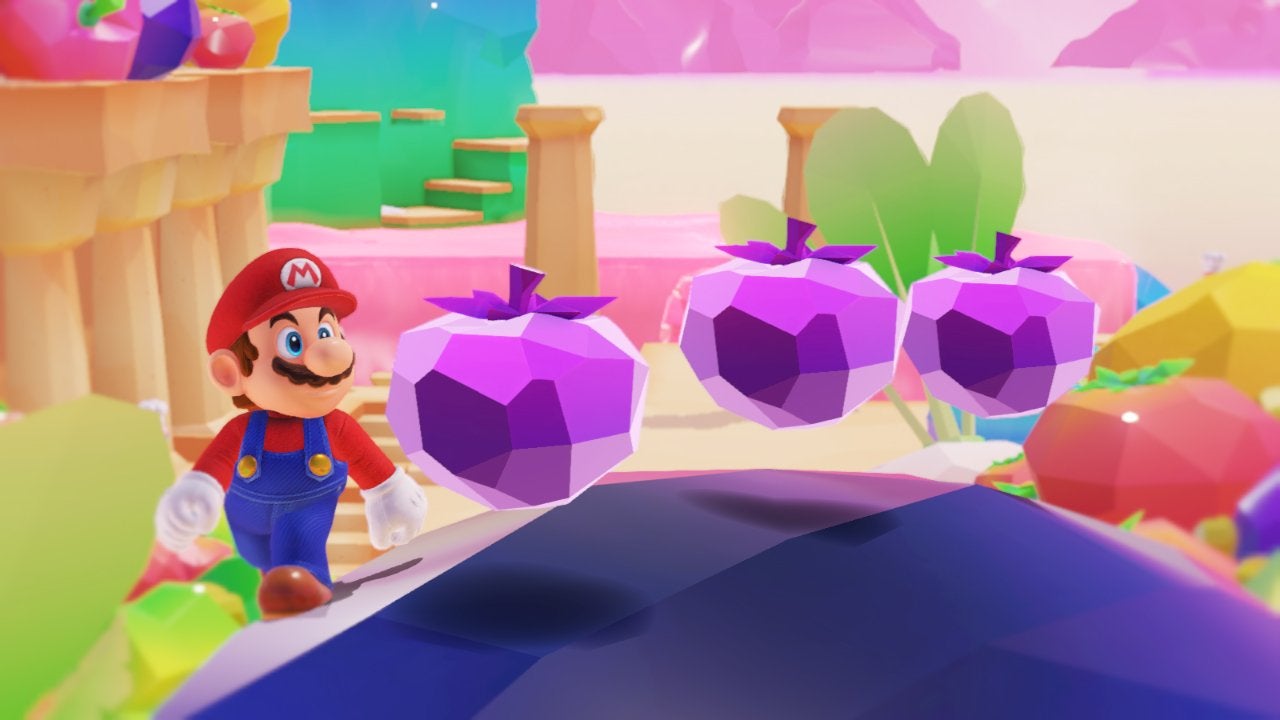 In between run-of-the-mill gold coins and Power Moons we find regional coins, which most players simply refer to as "purple coins." Each kingdom (bar a few of the smaller ones) features either 50 or 100 of these unique curios. Nintendo's decision to give each world its own currency is nothing short of brilliant. From an aesthetic perspective it adds so much more personality and beauty than simply using one overarching design for every single coin.

Not only do Odyssey's purple coins add to each kingdom's personal atmosphere, they also act as legitimate currency for the local Crazy Cap shop. One side of each shop is solely dedicated to purple coins of the current region, with exclusive souvenirs, stickers, and outfits available for purchase. For some, these kinds of in-game trophies are the most enticing, and if players want them all they need to find every purple coin within the kingdom. Nothing offered in the Crazy Cap store is essential for moving forward in the game (aside from a handful of outfit-related Power Moons), so there's not much pressure to hunt them all down immediately. 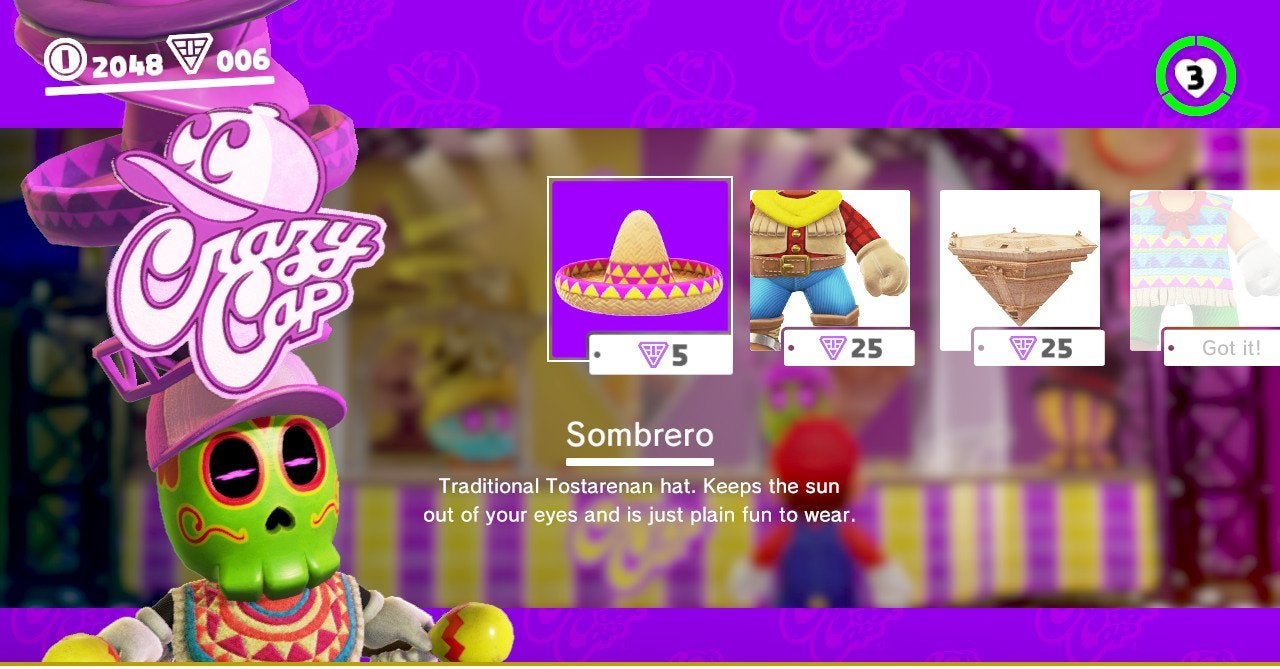 When it does come time to locate purple coins they're always nicely clustered in groups of three. If a player spots one, there's a good chance others are close by, waiting to be discovered. Unlike many of the obscure Power Moons, hidden underground or behind some inane task, purple coins are never too difficult to find. Players may have to snoop around in 8-bit areas or peek behind a waterfall to gather them all, but their placement in the game's strikingly large settings is well thought out. More often than not players will stumble upon a trio of these spinning purple beauties while simply surveying a new locale.

Super Mario Odyssey's purple coins land right in the sweet spot between the never ending stacks of classic gold coins and the occasionally-aggravating glimmer of Power Moons. They are a collectible that is visually distinctive, enjoyable to track down, and virtually nonessential to the games progression. It may not seem like something to rave about, but from a gameplay perspective these oddly-shaped trinkets are an anomaly that no past Mario adventure has been able to provide.

With the recent uptick in 3D platformers, let's hope other developers are paying attention to details like these that can make a seemingly subtle aspect of a game so significantly effective.