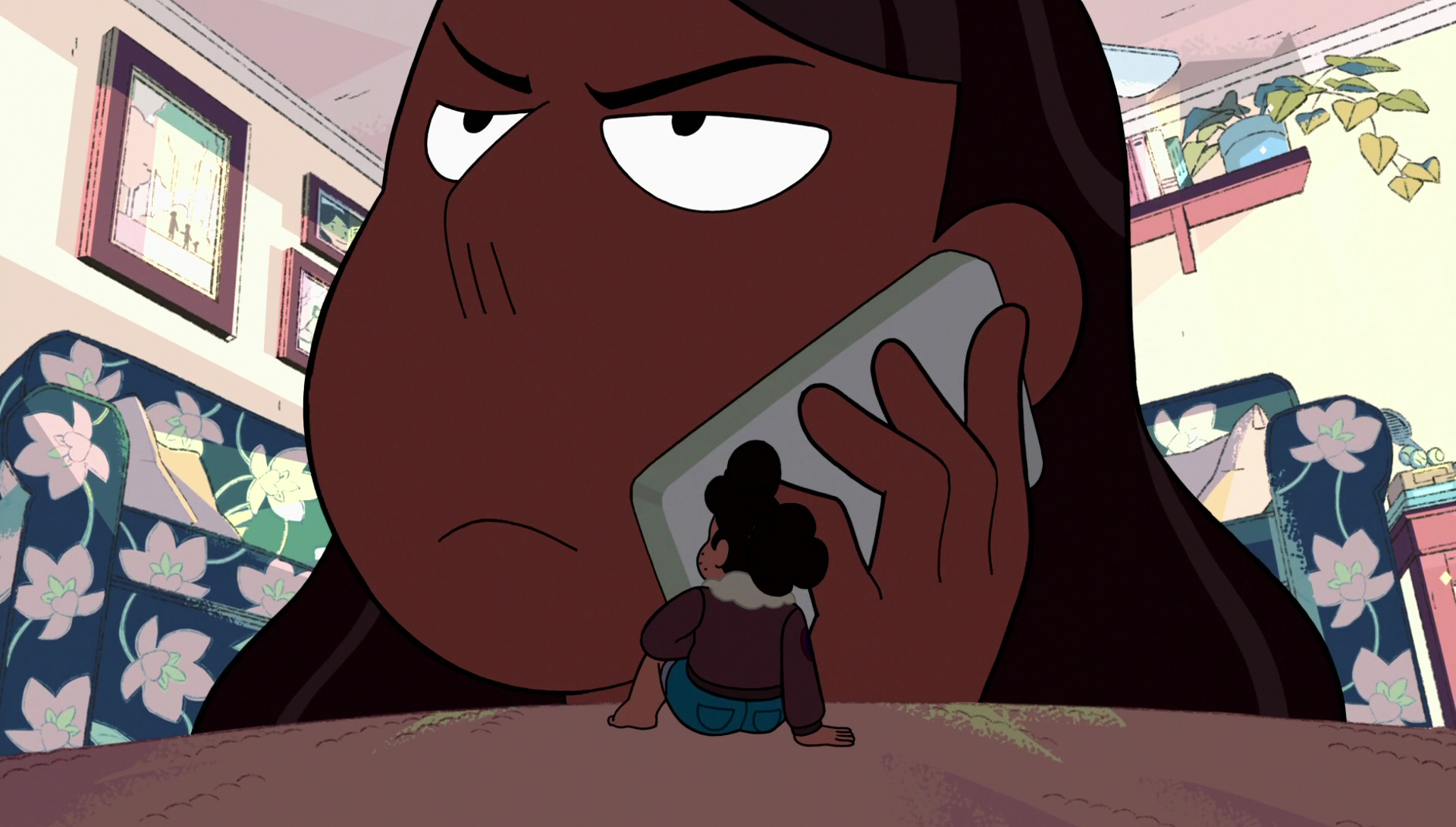 As Steven has gotten older over the past five seasons of Steven Universe, he's come into his powers in ways no one expected - not even the Crystal Gems. In last weekend's surprise drop of two new episodes, Steven's mysterious dream abilities take the centre stage to reveal the Diamond he (and his mother) supposedly murdered.

After returning to Earth from the Gem Homeworld through an interdimensional portal in Lars' head, Steven has recently spent time trying to heal his frayed relationship with Connie, who was still shaken by Steven's decision to give himself up to the Diamonds without considering her feelings. But with their bond now on the mend, Steven and Connie reason that it's high time they paid Lars a visit to see how he and the Off-Color Gems have been faring since last we saw them, hiding on Homeworld.

In "Lars of the Stars", Steven and Connie tumble through Lars' hair portal only to find that the undead teen has become a cocky space pirate and the runaway gems his ragtag crew. The human teens' reunion is cut short by a message from newcomer villain Emerald (voiced by RuPaul's Drag Race alum Jinkx Monsoon), who informs the team over video-link that she's coming to kill them all. As Lars nonchalantly takes his place in the captain's chair, his crew springs into action, and it becomes really clear just how much Lars has grown as a character since he was first introduced. 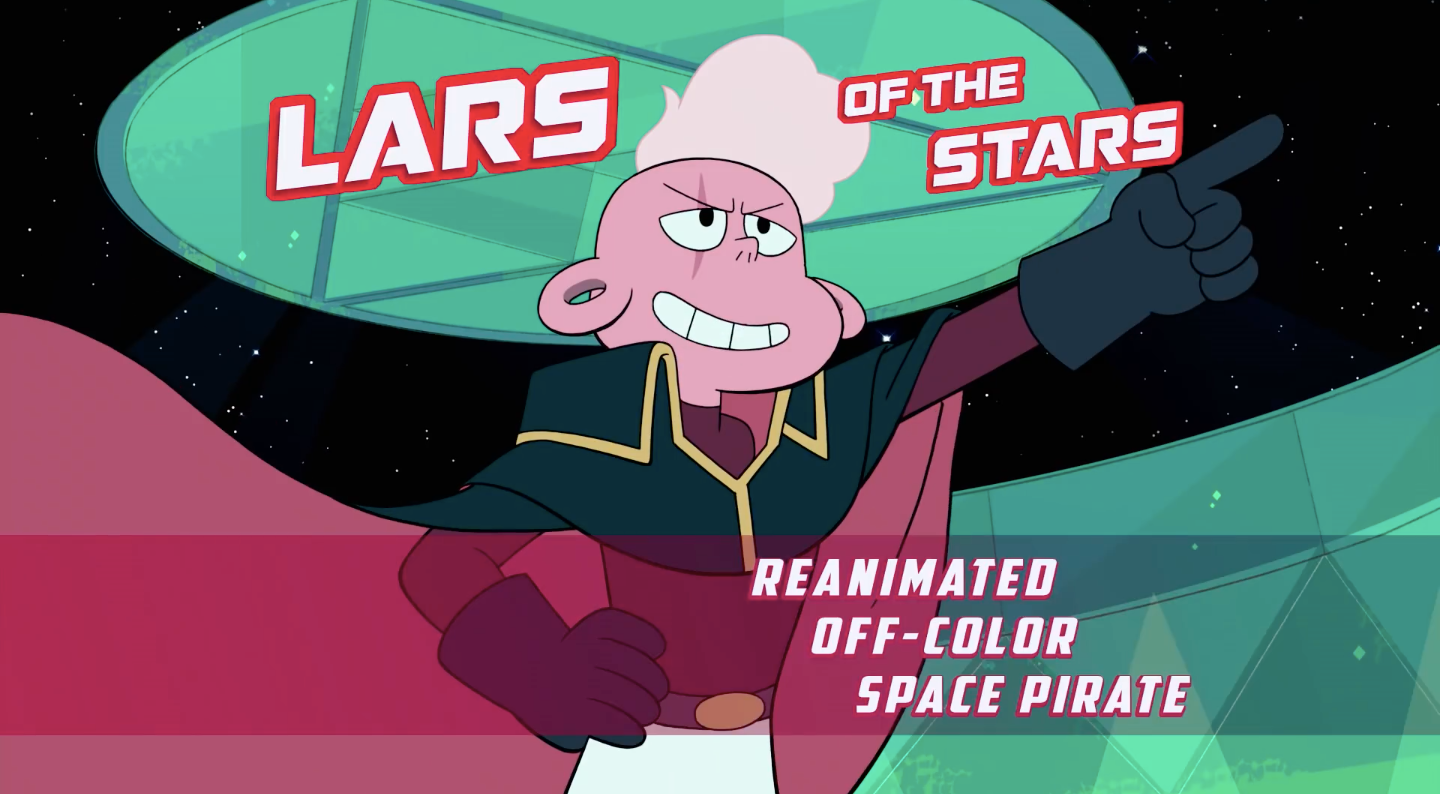 This confident, self-assured version of Lars is a far cry from the petty, insecure doughnut shop worker he was first introduced as way back in the Steven Universe pilot. Between being snatched away from his planet, murdered by gems, and brought back to life, the newly-christened Captain Lars™ has clearly grown from his Steven-related adventures and become a better person for it. It's something that Steven and Connie immediately recognise in their friend and feel he'll recognise in Sadie, who's been moving on and living her life back on Earth.

But seeing that Sadie's managed to begin piecing her life back together proves to be almost too much for Lars, and we see that for all of his personal growth, Lars is still just a scared teenager trying to figure things out - and rightfully so. Lars' maturity is false as much as it is deeply rooted in escapism rather than any sort of real closure. Being confronted with Sadie and seeing that she's dealt with the pain of losing Lars - and made peace with his absence - forces him to recognise that he's still deeply mourning the loss of his life, and the strain of it all makes Lars withdraw and regress.

Lars' inability to cope with his emotional stress and the looming threat of Emerald's upcoming attack inspires Steven and Connie to fuse in order to bring someone on board who can actually lead. Similar to Captain Lars, this Stevonnie is a clear evolution from the person they used to be when first introduced. Whatever self-doubts or insecurities Stevonnie might have once had about their ability to fight is significantly downplayed, and instead we see a version of Stevonnie who very well could come to lead the Crystal Gems. 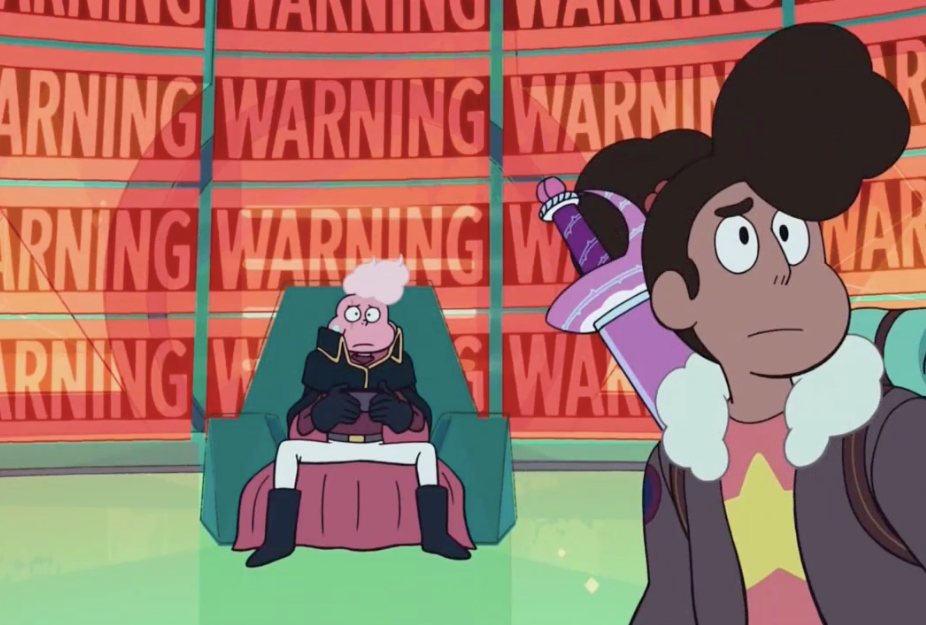 "Lars of the Stars" culminates in an epic game of space chicken between Lars' crew and Emerald, but the scene isn't just about space ships blasting at one another - it's about facing down one's fear and pain. The decision the Lars ultimately makes speaks to the wisdom he's gained as a leader and the confidence he's developed in himself. Stevonnie's willingness to follow Lars speaks to their understanding that sometimes it's fine to step back out of the spotlight if the situation calls for it.

Unfortunately, Stevonnie's decision gets them shot down and stranded on an abandoned planet, the setting where the second episode, "Jungle Moon", takes place. Where "Lars of the Stars" was largely concerned with real-time character development happening as people were being shot at in space, "Jungle Moon" takes place almost entirely in Stevonnie's dreamscape and potentially in the distant past.

After crash-landing on an abandoned moon once colonised by gems, a very Indiana Jones-like Stevonnie sets out on a mission for survival as they wait for Lars to locate them on the surface. Stevonnie encounters a diverse array of organic life, suggesting that not all gem settlements were completely detrimental to natural life, and takes refuge for the night in a large enclosure that feels oddly familiar. The moment Stevonnie falls asleep, "Jungle Moon" really begins to kick in and the story behind of one Steven Universe's most anticipated and mysterious characters begins to unfold. 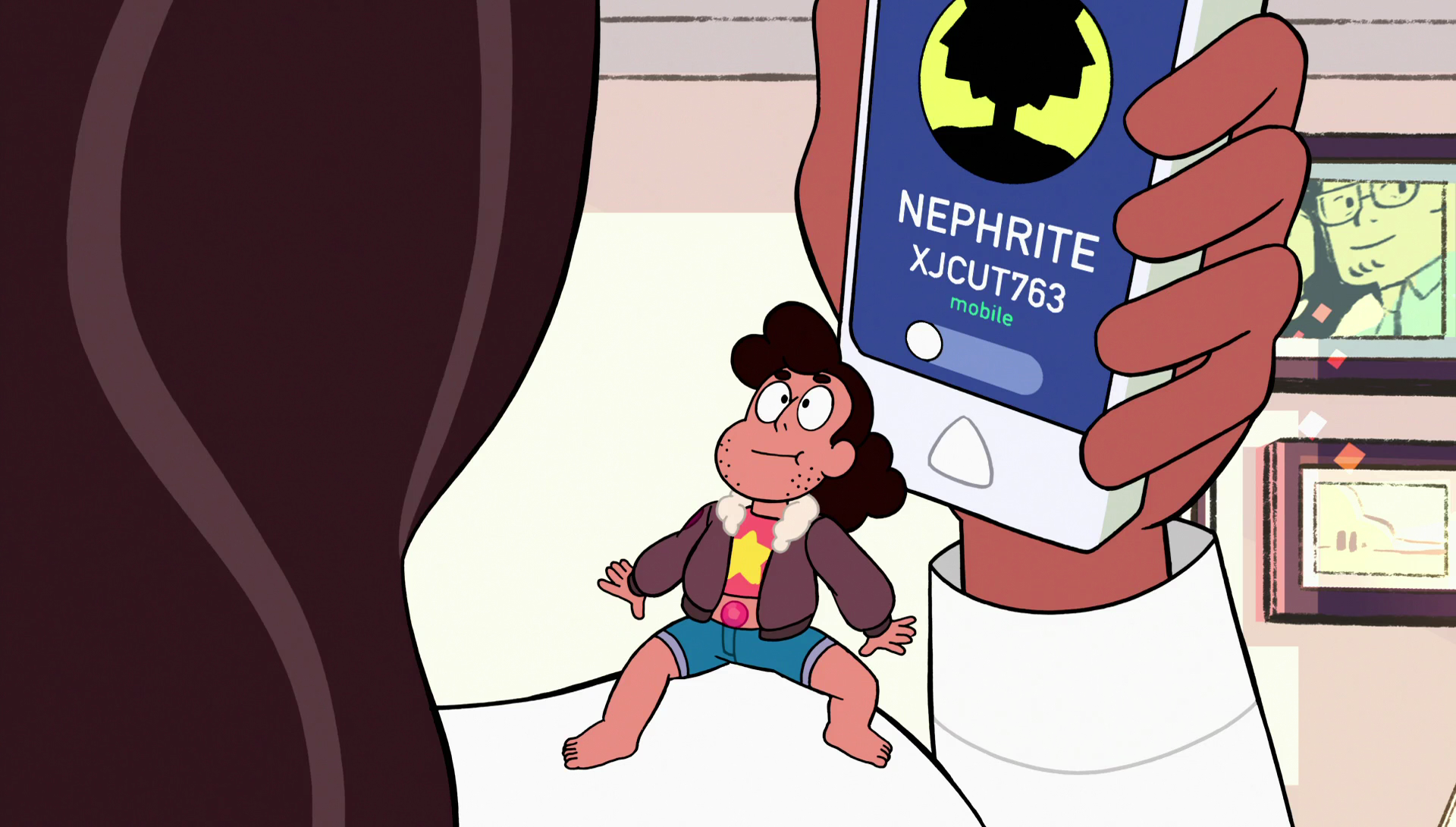 Stevonnie emerges up out of what appears to be the Maheswaran family's carpet, and it quickly becomes clear that they're having some sort of Lynchian dream experience. To Stevonnie's normal size, the living room appears gargantuan, as does Mrs Maheswaran, who's having a terse conversation with a colleague about an invasion and destroying organic life.

To Stevonnie, the mega-Maheswaran is still their mother and they try to get her attention by climbing onto her and yelling into her ear, but in that moment, the dream's logic begins to break apart to reveal the truth. Mrs Maheswaran is Yellow Diamond and her colleague on the phone is a new gem - Nephrite.

Yellow Diamond/Mrs Maheswaran plucks Stevonnie from her shoulder and just as the dreaminess seems to be clearing up, "Jungle Moon" introduces a different, more subtle kind of inversion of reality. The Maheswaran's living room disappears and is replaced with Yellow Diamond's command centre, which is being manned by what can only be described as Mrs Maheswaran doing excellent Yellow Diamond cosplay. But because this is a dream, none of it seems to bother Stevonnie, who now recognises their mother as Yellow Diamond. 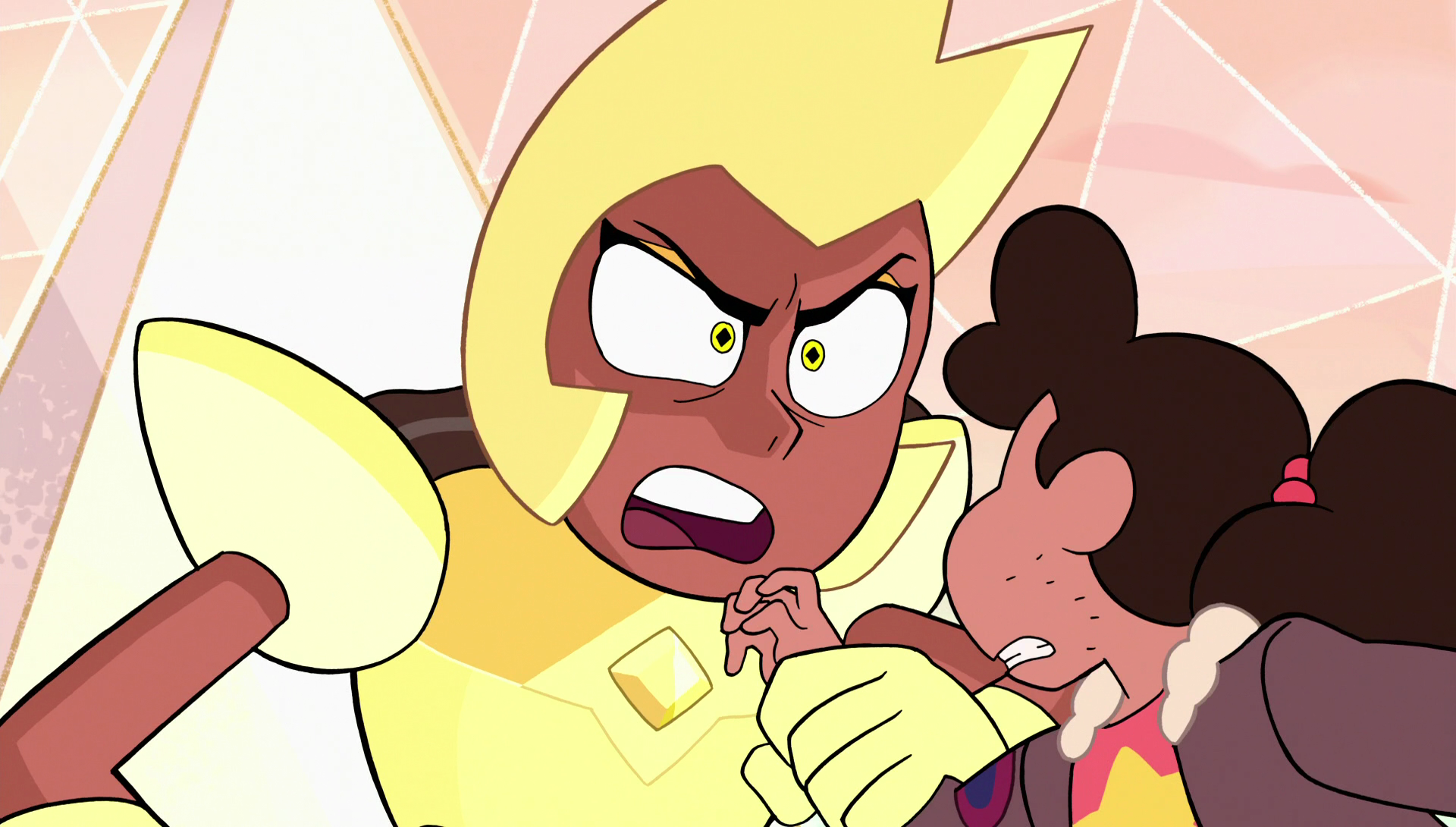 What's also striking is Stevonnie's marked slide back into a kind of immaturity that you'd expect from a child much younger than them. In an almost kid-like way, Stevonnie bothers Yellow about what she's working on - the colonisation of a planet - and why they don't get to work on that sort of stuff, too. Stevonnie wants to command a dropship, Stevonnie wants a colony, and they want it all now. When Yellow tries to dismiss Stevonnie's demands, the fusion devolves into an outright tantrum about how unfair it is that they don't have the things Yellow has, and the real secret of "Jungle Moon" slides into focus.

Stevonnie defiantly tells Yellow that they want their own army and planet because they're just as important as the diamond, to which Yellow questions why she, Pink Diamond, doesn't act like it. Stevonnie stomps away from the fight and as they rear back to punch a wall, Pink Diamond's reflection is revealed - implying that the entire dream was a memory of hers.

Even though it's one of the more information-packed episodes of the season, "Jungle Moon" introduces even more mysteries than it answers, really. For years now, there have been all sorts of theories as to what sort of gem Pink Diamond might have been before Rose Quartz shattered her. Some believe Rose and Pink to have been the same gem while others have speculated that she might exist in shards scattered across the world.

"Jungle Moon" doesn't answer any of that, but it does establish that at one point in time Pink was seemingly the youngest, most passionate of the Diamonds. It's also interesting to note that Pink was physically much smaller than Yellow Diamond as evidenced by Stevonnie's waking up and seeing that the punch left in the wall is where she'd dreamt it. The tone of condescension and accusation of immaturity from Yellow Diamond suggest that long before she'd been given an army of Quartz soldiers, Pink might have been thought of as the temperamental younger sister who wasn't ready for the big leagues.