Thanos’ Real Name Is Thanos And Everybody Needs To Calm Down

Thanos, the Mad Titan who wields the Infinity Gauntlet and its six powerful gems does not go by all that many different names. But a revelation in a recent issue of the Thanos solo comic written by Donny Cates, with illustrations from Geoff Shaw and Antonio Febela, has thrown readers for an odd loop.

Issue #14 of Thanos opens with its titular character reflecting on his distant past — specifically the day he was born on the Saturn’s moon Titan to a woman named Sui-San. The day was Wednesday and everything about Thanos’ delivery was seemingly normal until Sui-San was able to actually look at her baby.

Unlike Sui-San, who resembled Earth humans like all other Titans, her son was born with his signature purple skin and jet-black eyes in which she could already see that he was destined to be the arbiter of the universe’s destruction.

Understandably, seeing the end of all things almost immediately drove Sui-San mad and Thanos explains that in the final moments of her sanity, she realised her son was to be called “Thanos.” 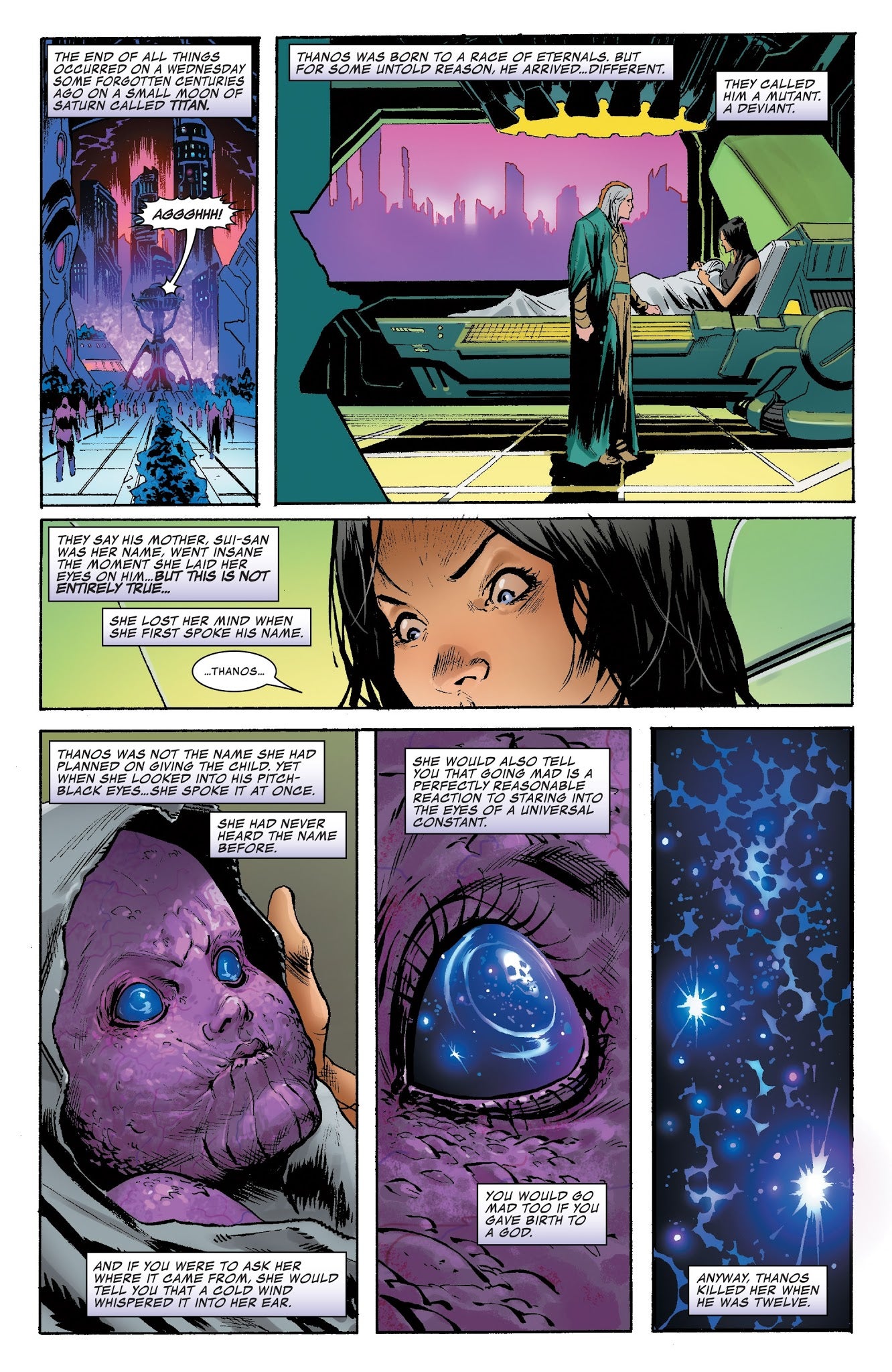 But this issue of Thanos also explains that before actually meeting her son, Sui-San originally intended on giving him another name he hadn’t heard since the day he killed her when he was 12 years old.

Thanos jumps forward in time to pick up with the thread the series has been following since a badass Ghost Rider from space (with a shard of the Time Stone) showed up out of nowhere, wrapped Thanos in chains, and took him for a little joyride into the unknown.

As it turns out, this particular Ghost Rider works as a sort of herald for Thanos’ future self who is now seeking his younger counterpart’s assistance with a mysterious plan. Upon arriving in the future, Thanos immediately attacks the Ghost Rider and when his older self attempts to explain what’s going on, the two begin brawling — mainly because the younger Thanos refuses to believe what he’s being told.

It isn’t until the elder (and grayer) Thanos says the decidedly more…human name their mother wanted to give them that the Titans’ fight ceases and the younger realises the truth. The name? Dione. Like Warwick, but with one less ‘n.’ (Or like that other moon orbiting Saturn.) 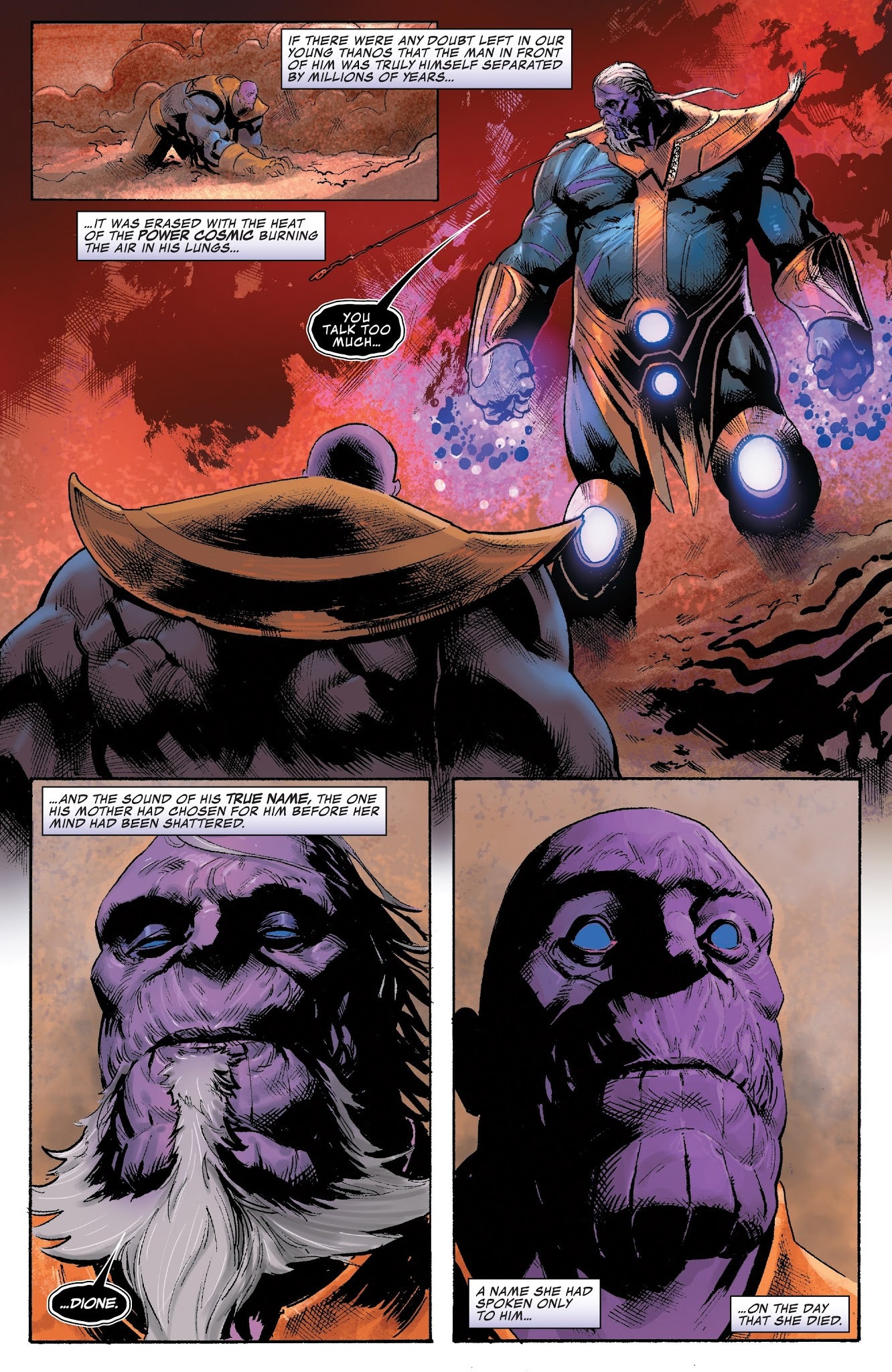 News of Thanos’ supposedly “real” name quickly sent fans of the series into a titter because of the sheer absurdity of it, but according to Thanos writer Donny Cates, everyone needs to chill out because Thanos’ name is Thanos. After receiving a number of confused tweets from fans about the news, Cates took to his own account to clear things up once and for all:

Ughghhhhh, no. No. It’s not. Dione is what his mom was GOING to name him. The name she had picked out before she saw him and went crazy and named him Thanos.

So no, there is no Dione, the Mad Titan. Only Thanos — and not just because that’s his chosen name, it’s quite literally the one his mother decided to give him.