There’s Something Off About Marvel’s Star Wars Comic

The most recent arc of Marvel’s primary Star Wars comic has been fantastic, as the team behind the first, outstanding volume of Darth Vader, Kieron Gillen and Salvador Larroca (joined by colourist Guru-eFX), have penned an interesting epilogue to the events of Rogue One. But something’s been bothering me more and more with each issue, and it’s coming up every time Han, Luke or Leia appears.

“Ashes of Jedha”, which began when Gillen and Larroca took over the main Star Wars book in issue #38, has taken Luke, Han and Leia to the infamous site of the first Death Star firing test as seen in Rogue One. The story has been examining what remains of the legacy of Saw Gerrera and Jyn Erso’s team of fighters, and how the horrors of the Death Star have changed the Jedha resistance and the Empire itself. That’s fascinatingly fertile ground to tread, and an interesting way to explore how the heroes of the original trilogy come to learn of and honour the heroes of Rogue One. But revisiting Jedha isn’t the problem. It’s the faces of the main characters. They’re mostly fine, and then suddenly, a panel later, they’re so… uncanny. 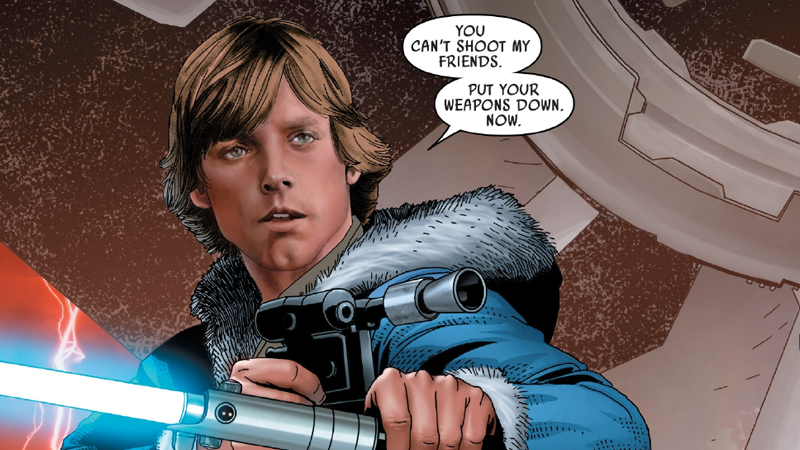 And it isn’t just uncanny because they have an awkward hyperrealism, although that’s part of the problem. It’s uncanny because these faces are ones that are taken right out of the movies – or, to give its technical term, they’re heavily drawn from photo referencing.

Photo references are standard in art, using everything from a character’s likeness, to the way a particular movement shapes the body, to the way a character stands on a certain surface. It’s commonplace, and comics art is no stranger to it. But Larroca’s facial work for this Star Wars arc trades in it so heavily, scenes with the main trio almost become a guessing game. Is Leia turning to face someone behind her in this panel, or is she noticing Han walk into Echo Base in Empire Strikes Back? 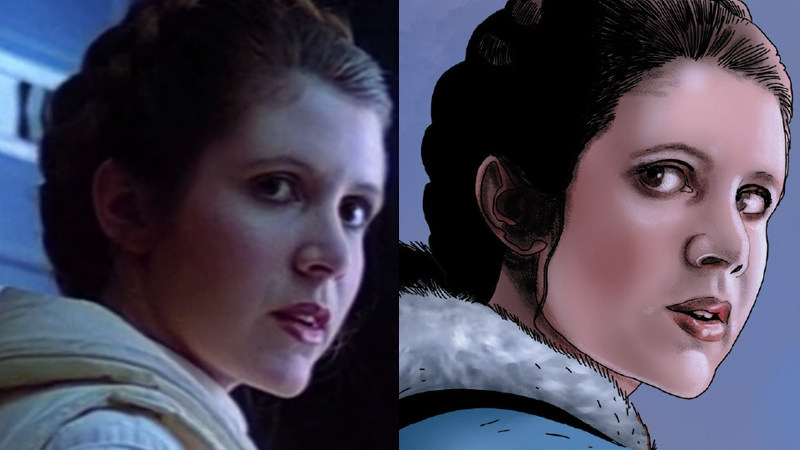 Is Han here really talking to someone about destroying expensive Imperial equipment, or is he wishing that the Force is with Luke on Yavin IV?

Like many, I’m a huge Star Wars fan, and I’ve watched the movies a frankly absurd number of times. Individual frames, characters, moments and expressions are all burned into my memory with more permanence than actually useful information, such as where I left my keys or what the pin code on my phone is. You might say that’s the ideal intended audience for Marvel’s big Star Wars series. But it also means that almost every time Larroca draws a panel with one of the main Star Wars heroes in it, I’m ripped out of the story that’s meant to be happening on Jedha, and faced with the realisation that I’m looking at a frame from the movies that Larroca’s art has painstakingly recreated.

These depictions look wildly out of place with the rest of the comic’s artwork, making it even more noticeable. Even the line work and Guru-eFX’s colouring style significantly alters for these faces in comparison to the shading and stippling seen on the bodies and locales around them. And it seems like the more this current arc has progressed, the more other readers and critics, everywhere from Polygon to social media, have been pointing out the weirdness.

Look, this isn’t a knock against Salvador Larroca’s work at large on Star Wars presently, or with colourist Edgar Delgado on Darth Vader before it, which has been otherwise roundly excellent. His technical design work is frequently stunning, especially when it comes to imagining vast gigantic ships often found in the Star Wars galaxy, such as the ginormous mining vehicles menacing the Rebels in the current Jedha arc. And not every movie-character face he’s drawn on Star Wars uses this technique. When it comes to scale and fancy splash pages, few can beat the size and scope of what he and Guru-eFX have brought to Gillen’s storyline. It isn’t even a knock on photo referencing, which, like I said, is a completely valid tool in an artist’s arsenal (although anyone who’s heard of Greg Land knows its history has not been without its controversies).

But when it’s pushed too far, it leads to some very strange-looking and jarring results, which primarily serve as distractions to the story. We’re forced to stop and acknowledge Mark Hamill, Carrie Fisher and Harrison Ford and whichever movie scenes they were in, instead of simply seeing Luke, Leia and Han in the new adventure being told.

The shame of it is that it isn’t even necessary. People weren’t complaining about Dark Horse’s old Star Wars books or even the classic Marvel comics 40 years ago because artists such as Cam Kennedy or Howard Chaykin weren’t perfectly capturing the likenesses of Harrison Ford or Carrie Fisher. All that’s needed is for the art to properly evoke the characters, and the comic feels like it’s telling a Star Wars tale.

Case in point: Some of Marvel’s other modern Star Wars comics! Take, for example, Angel Unzueta and Arif Prianto’s current work on Poe Dameron – and Phil Noto’s work before them on the same series – which manages to feel like accurate depictions of Oscar Isaac, the elder Carrie Fisher, and other cast members from The Force Awakens without recreating exact stills from the film:

And if there is photo referencing involved in Unzueta’s line work process – which, again, wouldn’t be a problem! – it’s significantly less prominent than what’s at play in Larocca’s art in Star Wars‘ current arc. It strikes a much stronger balance between likeness and interpretation, and is less likely to have you distractedly wondering just where you’ve seen those exact expressions on Oscar Isaac and Greg Grunberg’s faces, and in which scenes.

Really, that’s what reading a good Star Wars comic should feel like: Giving us familiar faces, watching them experience something that has that special Star Wars vibe, while also feeling new. Marvel’s main Star Wars comic is telling a new – and often enthralling – story, but its art makes it feel as though clips from the original trilogy have been mashed into it, which, in a very real way, they have.

Use the Force, Marvel. Trust your feelings – and your art.