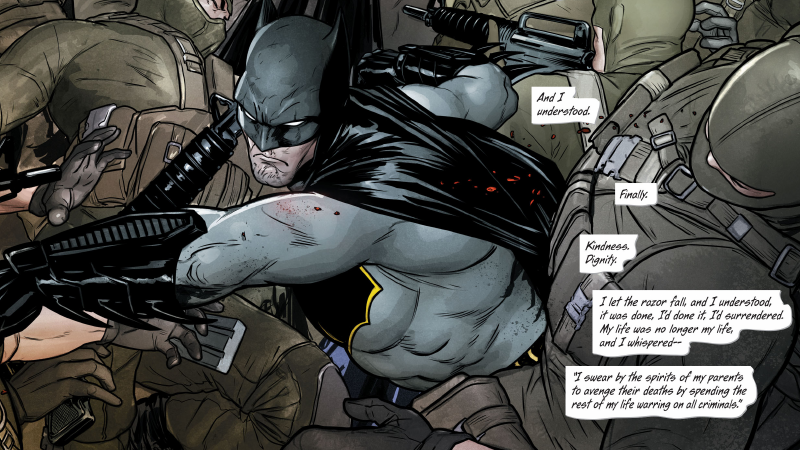 Writer Tom King has hit superhero comic stardom in the past few years with gripping series such as Marvel's The Vision, and DC's Batman and Mister Miracle, all of which took deep psychological dives into the minds of their protagonists. King's next project at DC sounds like it's going to do the same, but on a much larger scale.

At this past weekend's DC in DC convention, King revealed that he will be spearheading a mysterious new initiative, currently referred to as Sanctuary, for the publisher. Whatever form the project takes - whether it's a new ongoing comic, or a limited series, or even a prelude to some DC-wide event - remains to be seen, but Sanctuary itself, according to King, will follow crisis centres in the DC universe designed for superheroes to come and discuss the personal, psychological effects of a career in crimefighting in a safe environment. Here's a little more from King himself, speaking at a panel discussing PTSD and trauma in comics and comics writing:

The DCU has a bunch of superheroes and all they do is fight, every time, and that must have a psychological effect on them, right? You can't live a life of violence and not feel that violence deep in your heart - and we also have a group of superheroes, the Trinity, who care about these other heroes. They sort of feel like parental figures, the foundation that stands beneath them. And they care about them for two reasons: One, because they're good people, but two, if superheroes feel trauma and it drives them a little mad, that's a danger. So, as both a practical and a compassionate matter, they have set up something called Sanctuary, which is a place that you can go, modelled on veterans' crisis centres - which is an interesting name for them - and talk about this trauma and admit that this had an effect on you; where you can admit that being a superhero and seeing a life of violence and seeing people get hurt around you, that that has some sort of impact on you - and Batman, Superman and Wonder Woman can help you.

King also noted that Sanctuary could play a role in another big, secretive thing he's currently working on for DC that can't be discussed yet, but given a few recent teasers the writer's given on Twitter, his use of the term "Crisis Center" is interesting. After all, "crisis" is not a word to be thrown around lightly in the DC universe - which hasn't had one of its iconic multiverse events since before the New 52 universe began. If a new Crisis is on the way, would King be at the helm?

We'll bring you more on Sanctuary as we learn it, but if you're interested in hearing more, you can see the full panel in the video below - the "Battle and Trauma in Comics" panel begins at around 3:39:45.