Why People Are Freaking Out About Street Fighter's Ryu And Sakura 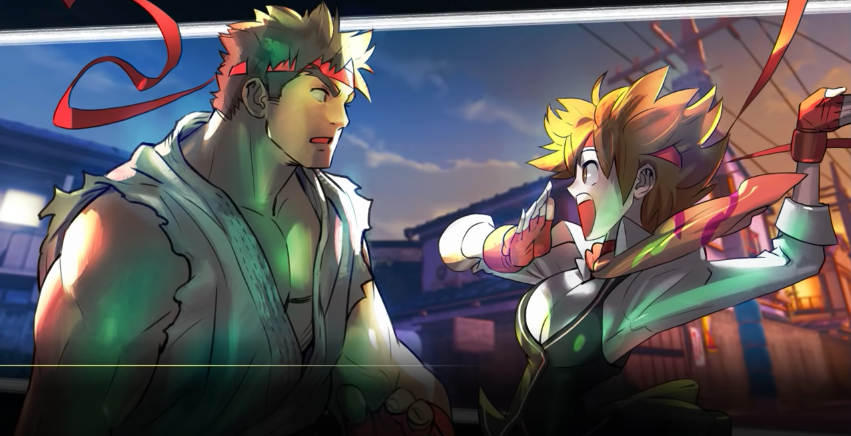 In the Street Fighter series, Sakura has always wanted to prove herself to her hero Ryu. In Street Fighter 5: Arcade Edition, the bar appears to have been raised.

By Street Fighter 4, Sakura had a crush on Ryu, but now in Street Fighter 5: Arcade Edition, the recent high-school grad ponders the bigger things in life and appears to want more from Ryu.

She doesn't explicitly say she wants to have Ryu's child, but Sakura talks about how everyone gets old and dies. Ryu says he's busy and cannot take on a disciple.

Sakura replies, "Well having a disciple is similar, but I meant... having children to create new bonds in our lives."

Having children. Our lives. That isn't very subtle!

Of course, what Sakura is saying seems to go over Ryu's head, and he replies, "I see... I've never thought of it. But, that is another type of strength." Sakura thanks him, and she then says this was what she was looking for.

Ryu replies that he was glad to have helped, adding, "I think you should seek out strength in your own way." Here is Sakura's reaction:

Sakura low-key said she wanted to have children with Ryu. And he's all chill about it. pic.twitter.com/MKWk07KYze

So, yeah, this is now canon! Street Fighter fan fiction community has enough fodder for an eternity.

I CAN'T BELIEVE SAKURA JUST WENT WITH THE "PUT A BABY IN ME" RUSHDOWN
LOOK AT RYU'S FACE
LOOK AT HIS FACE
HE JUST GOT HIT WITH THE WAKEUP SUPER VERSION OF PICK-UP LINES pic.twitter.com/U1Rc0XFgR8

I did always think it kind of gross that Sakura always wore Ryu's old sweaty headband.

sakura: hey ryu do you wanna put a baby in me
ryu: no
sakura: what if i let you train the baby
ryu:
ryu:
ryu: let me think about it

fuckin really not buying this ryu/sakura thing. These images of his frozen face are really not helping. Isn't he like 50? Isn't she like 20???

After the Sakura story ending, I believe the Sakura/Ryu fan fiction community will BLOW UP! #SF5AE

Sakura: so anyways I wanna have a baby wbu

Ryu: WE JUST LINKED UP FIVE MINS AGO pic.twitter.com/NtQrUz4GSN

Damn, Ryu don't even got time to load for Sakura lol #PS4share pic.twitter.com/X8U6y6JvKL

if Sakura ever hit on Ryu it'd go something like this:

Sakura: hey do you wanna...come back to my place ;)

Ryu: oh yeah we can spar in the backyard! i love sparring in your backyard.

Ryu: nah your room is too small.

WHY ARE YOU ALL HYPE THAT SAKURA BEGS RYU TO PUT A BABY IN HER!? RYU IS GOING TO BE THE ABSOLUTE WORST FATHER. GOKU IS GONNA LOOK LIKE FATHER OF THE YEAR COMPARED TO RYU