featurehopoo gamesindiekotaku game diaryrisk of rainstealth
To sign up for our daily newsletter covering the latest news, features and reviews, head HERE. For a running feed of all our stories, follow us on Twitter HERE. Or you can bookmark the Kotaku Australia homepage to visit whenever you need a news fix.

Deadbolt strips stealth down to the essentials and I can’t stop playing it.

One hit and you’re dead in this side-scrolling shooter – not ideal for someone like me who prefers to rush through a level guns blazing over methodically planning my strategy and route ahead of time. And yet Hotline Miami-style quick restarts meant this sort of impulsiveness was completely viable. Every death taught me something new about the level I was on and on the rare occasion I was able to improvise and recover from sloppy mistakes, the game felt sublime.

Take the Dusk to Dawn Bar Club. It consisted of four adjacent rooms, a single studio on the second floor, and a basement flooded with raving vampires who mostly didn’t pay me any mind unless I started shooting.

I was the grim reaper turned hitman, and the game had tasked me with collecting key cards throughout the club in order to unlock a filing cabinet and find information on my next target. It took me several attempts to get one of the keycards, only to realise there were two more, and I had no ammo left in my gun to safely secure them. Oops!

A ventilation shaft let me sneak into the basement or the rear of the building, neither of which seemed useful in the beginning. Instead, I took my 9mm submachine gun and blunderbuss, a flintlock shotgun with only one shot, and went through the front door. The second room had three vampires, including one on the ceiling. As soon as shots were fired, a fourth ran up from the basement and flanked me.

It was a trainwreck, but several minutes later I had it down to a science. Use three-quarters of my submachine gun clip on the room and save my blunderbuss for the knife wielding vampires coming from the basement.

Deadbolt (now on PS4 and Vita in addition to PC) nails the satisfying precision of cinematic heist moments not with taxing patience (there is almost no waiting for the AI to move along patrol routes) but through muscle memory.

Most of the levels are small, and even the larger ones feel more like elaborate, 2D dollhouses than some of the more sprawling city-scapes of Gunpoint or Ronin. This Groundhog phenomenon of learning through quick trial and error isn’t new, but Deadbolt strikes a better balance with it than most, encouraging experimentation while still maintaining the stakes that come with not wanting to see hard-fought progress evaporate before your eyes.

But this only got me to the Dusk to Dawn’s third room. From there I could either go up to the second floor, take out two more vampires, and try to thin the remaining ranks from the rooftop, or charge into the club’s back room where two zombies with pistols were chilling on the couch watching TV. While Deadbolt streamlines a lot of the more complicated elements of stealth, it keeps things from devolving into trigger-happy shootouts with strict rationing.

You can only take two weapons into any level. From there you’re at the mercy of whatever’s lying around as you infiltrate: Knives, a hammer, the shotgun formerly in the hands of the doorman. With only a few bullets left in my submachine gun and a 10mm handgun I’d picked up from one of the vampires, I still had to neutralise three threats guarding three different keycards. The maths didn’t add up. 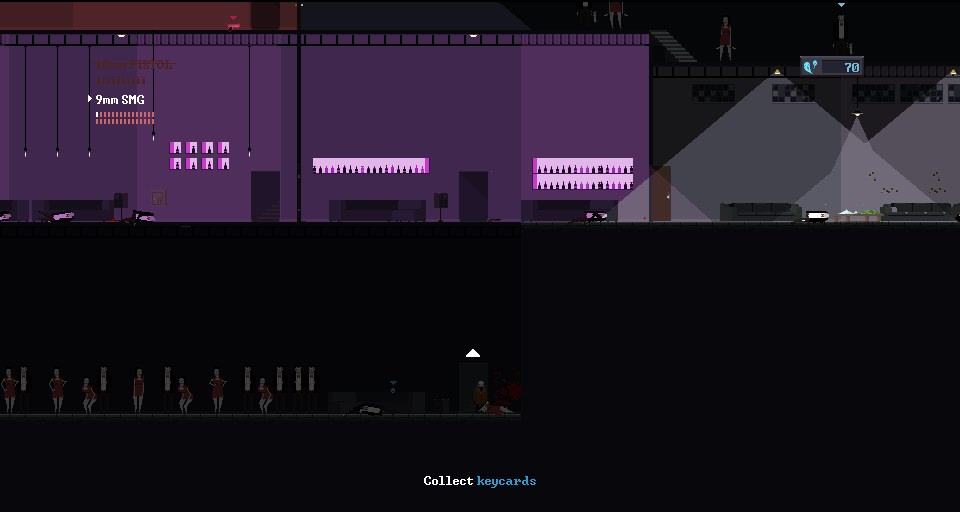 Still, I pushed on, clearing the remaining rooms efficiently so none of the enemies had too much time to be alerted to my presence and go into cover or gang up on me. Each exchange leaves you with less ammo then you had before, especially if you’re as poor a marksman as I am.

This dynamic is how you get into interesting situations. When all your weapons are used up, you can still throw wild punches. They don’t do much damage but do stun the enemy for a microsecond.

Hence how I found myself hiding in the vent hanging over the Dusk to Dawn’s basement, jittery as hell, trying to lure in the last remaining vampires one by one so I could subdue them with my fists. I couldn’t even bring myself to look at the screen for the seconds it took the last vampire to eventually fall. Surely she’d get one quick nick in with her dual knives.

Somehow she didn’t. Death finds a way in Deadbolt.