My Favourite Part Of Dishonored 2 Took Place In A Spreadsheet

Published 3 years ago: February 22, 2018 at 11:00 am -
Filed to:dishonored 2
To sign up for our daily newsletter covering the latest news, features and reviews, head HERE. For a running feed of all our stories, follow us on Twitter HERE. Or you can bookmark the Kotaku Australia homepage to visit whenever you need a news fix.

Clockwork soldiers? Kind of cool. But not as cool as logic puzzles.

When last I wrote about Dishonored 2 I lamented how tough it is to play a game like this as a time-strapped parent, what with all the secrets buried in levels that feel designed to be played in one long sitting. I’ve now finished the game and am thrilled with a moment that made it great to play as a husband.

Dishonored 2 became an unexpected marriage highlight thanks to a terrific logic puzzle that appears late in Arkane Studios’ 2016 stealth adventure. The puzzle is the core part of a complex door lock that opens once you match five names with five objects.

Those names and objects are mentioned, along with five colours, five cities and five drinks, in a written clue near the lock.

The lock is located early in one of Dishonored 2‘s final levels. You can leave it alone and creep through other parts of the level looking for clues that make opening it easier, but it’s more challenging, cooler and will get you a Trophy or Achievement if you solve it right there without added help. That’s how I chose to solve it.

Our own Kirk Hamilton raved about the puzzle in 2016, though he also embarrassed himself by showing his chicken-scratch way of solving the thing. 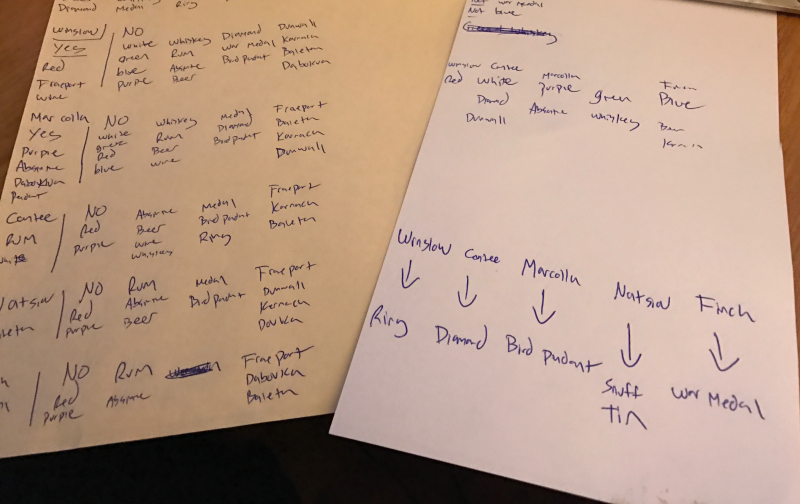 And here’s how you really should do it:

In 2016, Kirk explained that the puzzle was randomised. My version of the clues were different than his, but as soon as I saw how the puzzle was written, I recognised what kind of puzzle it was.

I snapped a photo of my version of the puzzle to use as reference on my phone and then began constructing the kind of grid I’d seen in the puzzle books I’d gleefully filled out as a kid. 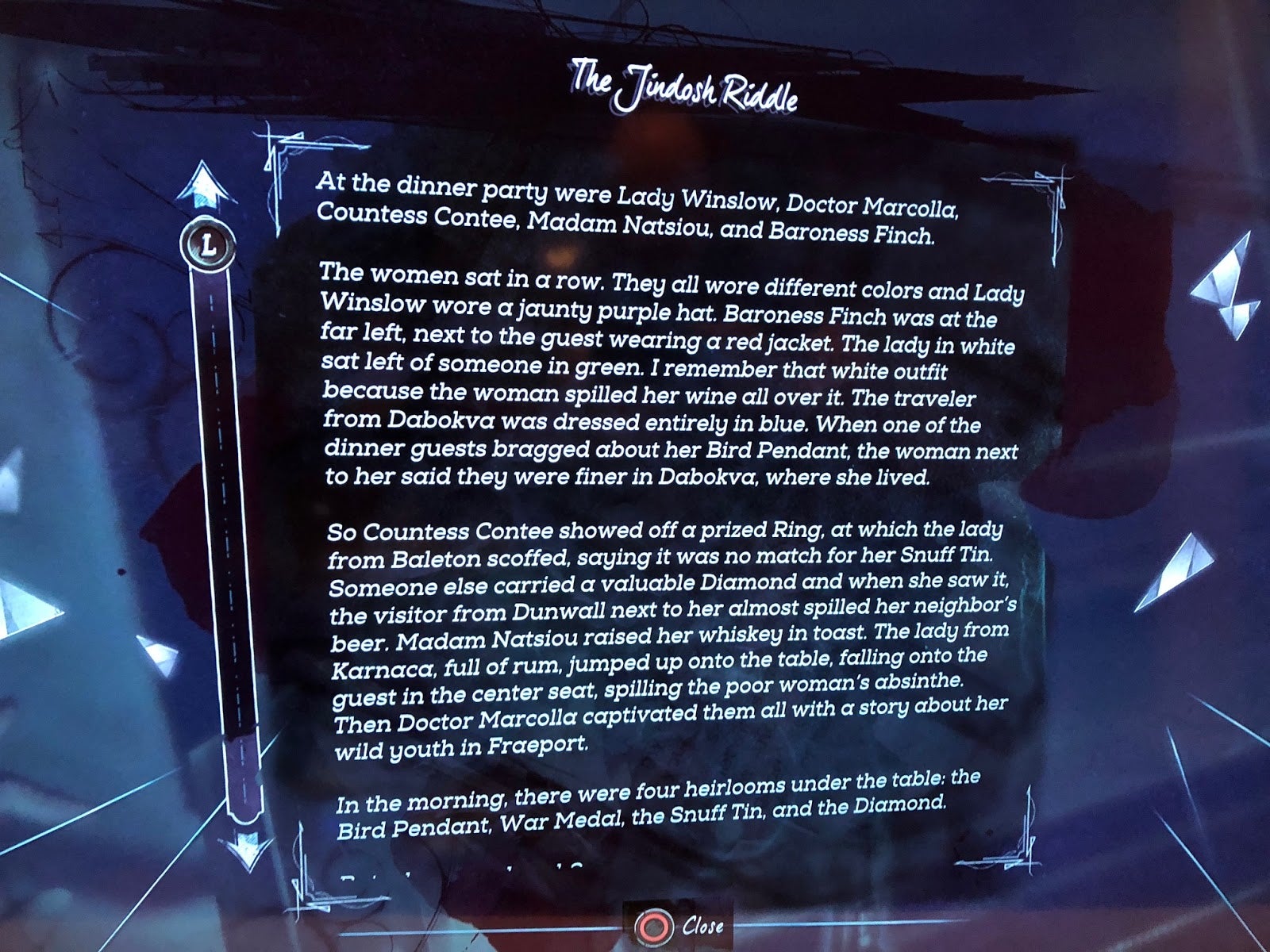 I hadn’t solved a logic puzzle in decades, but this stuff sticks with you. What I’d never done, I soon realised, was make the grid used for solving these puzzles.

I made my rows. I made my columns. You don’t want the elements in the row and the column to intersect more than once. I kept sketching tables that did just that.

My wife, who rarely plays games (other than Drop 7), saw me stressing and Googled around about how to make a logic puzzle. Then she sat down and started working with me to solve it. My – for this purpose, our – gaming time is limited at home, but over the next couple of nights we solved it.

We’d take turns reading clues, filling out Xs and Os, slowly eliminating impossibilities and occasionally marking down confirmed facts. We eventually zeroed in on the line “The lady in white sat left of someone in green” and decided to interpret it as meaning white was directly to the left and not a few seats away.

Taking that gamble (and saving a copy of the spreadsheet at that point, just in case), we plunged ahead. We were right and the rest of the puzzle quickly resolved itself.

Then she went back to non-gaming stuff and I played on. Nothing else in the game was as fun. Time travel level? OK, pretty neat. Final boss battle? Eh, not that into it.

That’s Dishonored 2 in the books: not great to play as a parent, but great to play with one’s spouse. I’ll get to the game’s expansion some time this year, but I’m off to some other games now.