The Most Difficult Game To Play As A Parent

featurekotaku game diaryparentaku
To sign up for our daily newsletter covering the latest news, features and reviews, head HERE. For a running feed of all our stories, follow us on Twitter HERE. Or you can bookmark the Kotaku Australia homepage to visit whenever you need a news fix.

In my first year as a parent, I’ve shunned VR games, sat out Destiny 2 and surprised myself by playing through Nioh. Despite all that, no game has been as tough to play in my new parenting life as Dishonored 2. I did not expect this.

Your available gaming time plummets when you have kids. I knew that would happen, and I don’t mind, considering how damn fun my little twins are. I can still play when they’re asleep. Over the last year, I’ve been able to chip through epics like Breath of the Wild and Horizon Zero Dawn, two hours a night, while still getting to bed in time to wake up.

A year into this parenting thing, I thought I’d figured out what to play and what to avoid. My findings:

All of the above being the case, I recently found myself in the mood to finish some shorter games. I’m still in the midst of the sprawling and still-expanding Assassin’s Creed Origins, still idling somewhere in Breath of the Wild‘s second expansion, and was just starting the apparently gargantuan Monster Hunter World.

No, I thought, let me give myself a break, pick up a short game, preferably one I started and just hadn’t finished, get through it and feel some closure. I chose Dishonored 2, a game I’d last played in late 2016, two days before my kids were born. 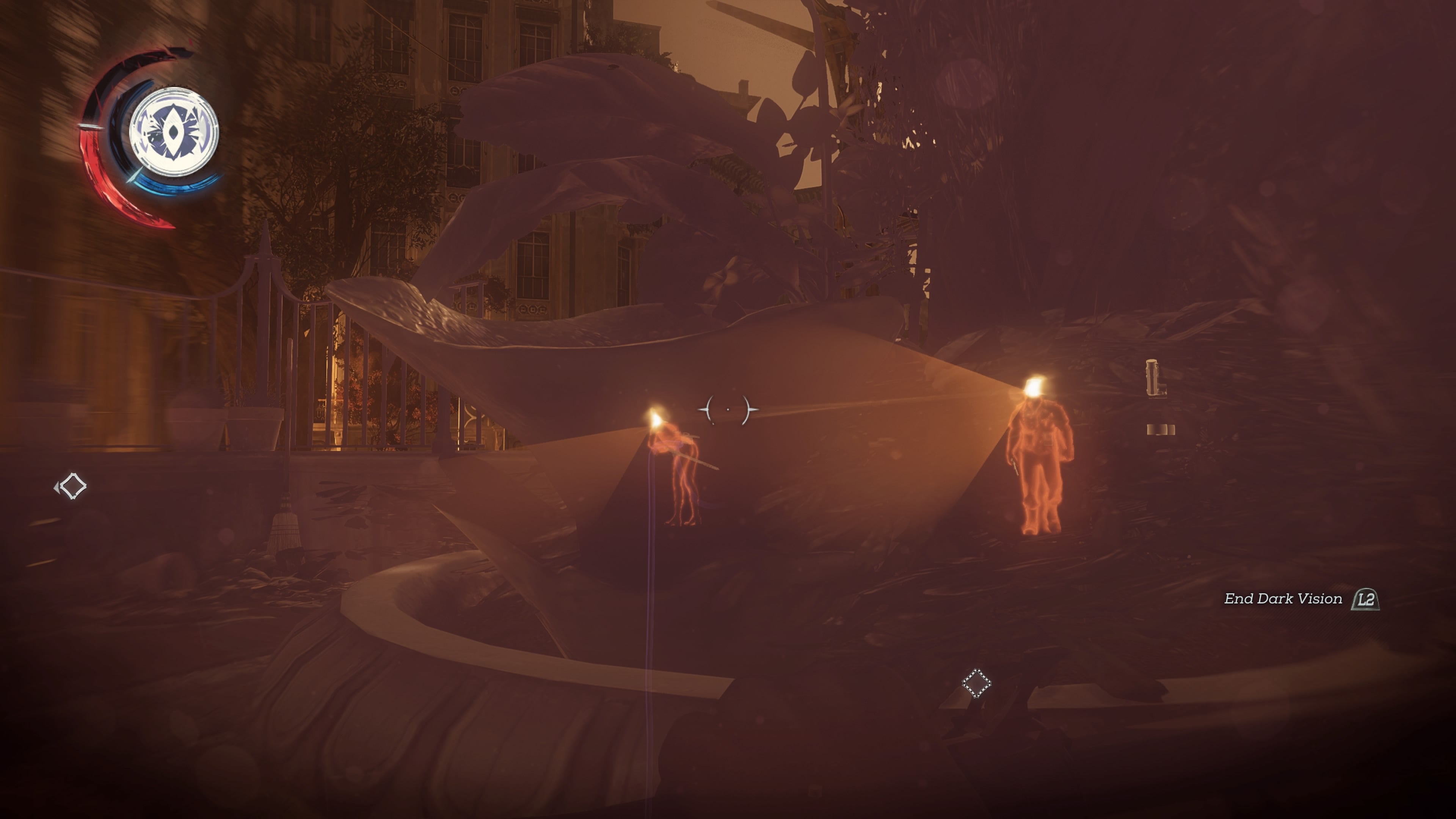 Must not get caught. Must not put myself in a spot where I am going to want to reload yet again!

I thought Dishonored 2 would be a good pick. I’d liked the first game. I’d already played through the sequel’s first level. It’d been out for a while and has probably had any of its launch edges smoothed. HowLongToBeat.com made it seem like I’d be able to knock it out in a week of nightly two-hour gaming sessions. It’s a linear, level-based game that empowers the player with new abilities the further you go. All good.

No game has been harder for me to play as a parent as this one, because the way I want to play it — and the way it feels like it was meant to be played — are at odds with the time and focus I can actually give the game.

Dishonored 2‘s levels are full of secrets. The secrets you find help you become more powerful. Level layouts are complex. There’s no mini-map or even a map screen that regularly shows you your position in the game world (plus: you have to find a level’s map).

The game does not hold your hand and expects you to creatively find your way through its spaces, preferably avoiding combat by sneaking up to or past guards while using magic to teleport across rooftops. It’s all really cool, but it’s also all best played really carefully and really slowly.

Initially, I was able to play Dishonored 2‘s levels with the right amount of caution. I’d start a level, creep through it for 90 minutes, reach a satisfying conclusion and move to the next level. That worked for the game’s second chapter and third chapter, though the latter pushed against my two-hour window to play.

By the fourth chapter, one set outside and then within a clockwork mansion, I became overwhelmed. I saw the minutes slip away as I crept through the neighbourhoods outside the mansion. I accidentally alerted guards and found myself outnumbered in melees that forced a restart. Eventually, inside the mansion I was intimidated by the coolest feature: that each room of the mansion can shift and transform. The childless version of me would have loved this. The parent version of me became incredibly stressed.

It took me three sessions to play through the level, my play clock nearly reaching five hours just for this level. I spent a lot of that time lost, confused, or re-loading the game to try to nail a stealth sequence without raising the alarm too many times. Several times, I held off from advancing in the level or finishing it because I was busy hunting for secrets I knew I’d otherwise never had time to go back and get.

A game like Nioh is incredibly difficult but is constantly dropping better weapons and letting you unlock new abilities. Dishonored 2‘s progression is much slower. There’s no easy way to simply get better at it by farming experience points and levelling up. Instead, you need to actually get better at the game. You need to play smart and unpanicked. You need to map the game’s levels out in your mind and not forget that mental map because you had to put the game down for day while you were halfway through figuring out how a clockwork mansion works.

There’s not a thing I’d suggest Dishonored 2‘s developers do differently. I don’t expect game creators to customise their games for people playing with limited hours. In fact, the game is so full of lore that reminds you what has happened in earlier chapters that I’d say it already demonstrates reasonable hospitality.

But I now can add a bullet point to my list, one that won’t keep me from finishing Dishonored 2 but will make me wary of starting another game like it: