kotaku game diary
To sign up for our daily newsletter covering the latest news, features and reviews, head HERE. For a running feed of all our stories, follow us on Twitter HERE. Or you can bookmark the Kotaku Australia homepage to visit whenever you need a news fix.

I recently began playing through the episodics extensions of 2015’s Batman: Arkham Knight with the lowest of expectations. I finished playing them excited about an unusual twist to superhero video games that shows up in the Robin episode.

The episodes are all short. The Batgirl-centric “A Matter Of Family” can run a few hours, as it’s set in its own tiny open world and plays as a microcosm of the main game. The other five can each be finished in under an hour and had, I thought, been regarded as insubstantial diversions that provide unsatisfying opportunities to play an Arkham game with the likes of Harley Quinn or Nightwing in the lead role. That’s mostly correct, though I enjoyed how the Catwoman and Nightwing episodes added a little more post-game storytelling, the latter one helping kick off the surprise dynamic in the Robin episode.

During the Nightwing episode, our hero Dick Grayson makes a comment about Barbara Gordon (Batgirl) and Tim Drake (Robin) getting married. I don’t remember if this was telegraphed in Arkham Knight, which I played through in the year it came out and only returned to recently to mop up some sidequests. In the comics, Barbara and Dick had a thing. The Barbara-Tim marriage threw me, but sure, why not? It seemed like a fun off-camera development.

There do seem to be some sparks between Robin and Batgirl in Batgirl’s episode, but the romance really hits its stride in the final Arkham episode, the Robin-centric “A Flip Of The Coin”. The little bit of marketing that episode received led me to believe that “Flip” would be all about Robin trying to take down Two-Face. Technically it is, but that isn’t why it is exciting. “A Flip Of The Coin” occurs while Batgirl and Robin should be on their honeymoon. Instead, he’s infiltrating a money-smuggling operation stocked with Two-Face’s goons while Batgirl keeps a dialogue with him going via his ear piece.

The gameplay in the Robin episode is standard Arkham stuff. The dialogue that plays out between Barbara and Tim is not. As Robin, I grappled from high point to high point, dropping down to perform silent takedowns on Two-Face’s henchmen. As I did this, Barbara and Tim bantered, at first playfully, as a married couple might, but then with some urgency as Robin realised he needed to get some information out of a factory worker.

“The foreman’s in the control room,” Barbara tells Tim. “He’ll know where Two-Face is hiding.”

“Nothing,” she shoots back.

“Barbara, I know when you want to say something,” he says.

Robin then interrogates the guy. 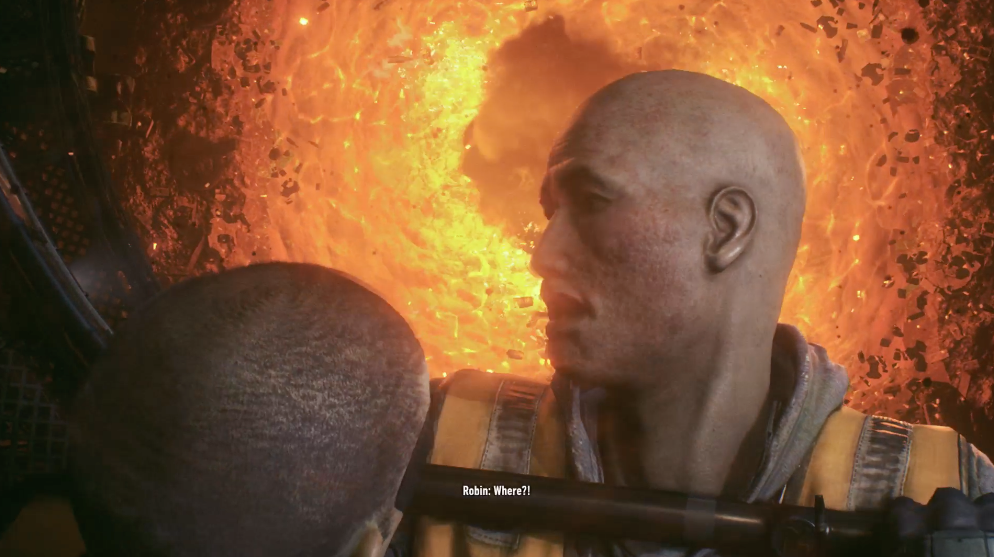 These newlyweds care for each other. Barbara is worried about how far her husband will go. Tim seems embarrassed about his rep. Batman is out of the picture by the time these events unfold, and the idea of if or how Robin would replace him hits even harder in the scene that follows. Robin is in a fancy hallway, heading to a circular balcony that looks over a heavily-guarded atrium. There’s a door down there that he needs to get through, but it is blocked by sentry guns and guarded by several thugs. The player has to figure out how to take them down.

Through a loudspeaker, Two-Face taunts Robin: “Let’s see if the Boy Wonder can cope without the Bat to hold his hand!”

“You can do this, Tim,” Barbara says in Robin’s ear piece as the game camera flies over the guarded room, tempting the player to figure out how to bypass the formidable defences.

The thugs know Robin is nearby and talk tough.

“He’s frigging deluded,” another says. “All that time working with the Bat, he thinks he’s better than he is.”

They continue, mocking Robin’s inexperience. Obviously Robin can hear this, and we can assume it bothers him.

The way to get past this room requires the player to make Robin slide down a vertical air vent and creep through a storage area. As Robin does this, Barbara asks: “How’s it going?”

“Slow,” Tim replies, with clear frustration in his voice.

“So everyone keeps telling me,” he says.

Sure, in this case, Barbara Gordon, now known as Oracle, is playing something of a cliched emotional labour supporting-wife role, but in her own episode, she’s the one in charge and Robin plays support. I’m suddenly enamoured with this idea of a superhero game in which young newlyweds urge each other on, fret about the influence of the older generation of heroes, and find ways to forge their own path. I wasn’t expecting to find something this compelling buried in the maligned DLC for a three-year-old game.

I loved this. I would play more of this.