Battlefield 1's New Dog Tags Are Almost Impossible To Get

Battlefield 1's final expansion, fittingly called Apocalypse, released during the last week of February. Alongside new guns and maps, the content pack also contains some very difficult unlockable dog tags. Reading over them, I wondered what it would take to get them.

For the most part, the tasks that you have to do to unlock the dog tags are difficult-but-possible. Most of them interact with Apocalypse's new "affliction" service assignments which are analogous to the Halo series' skulls; they make the game harder in some measurable way.

These things are hard, but they are fully within the realm of possibility. On a long enough timeline, all of them are more than achievable with perseverance. But each of these apocalyptic dog tags also have a requirement that exists to challenge the top players, some of which border on the impossible. Looming War, the dog tag mentioned above, also wants you to get 25 kills with a weapon called the Dud Club in a single life.

The Dud Club is a melee weapon. It requires you to get up close and personal with your opponents. In Battlefield 1, it's a difficult challenge to get five melee kills in a single life, so the chances of most players getting this tend toward zero. 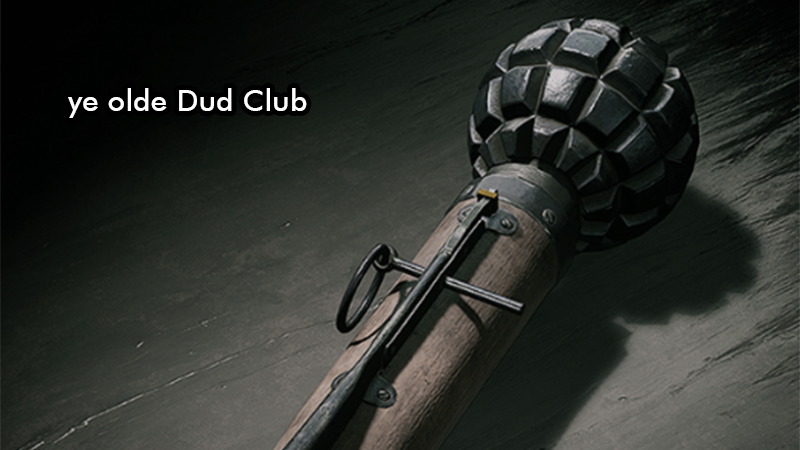 It's the Dud Club.Image: EA

They only get more difficult from there. The Creeping Death tag wants you to destroy a Behemoth, a giant vehicle that appears to shift the tide of battle in the losing team's favour, with a tiny little handgun called the Kolibri.

The Suffocating Pestilence tag demands that you get 1,000 meters of headshots in one life. The Withering Famine tag has my favourite, and it asks you to destroy an aeroplane with a tripwire bomb. Let that one sink in: You need to destroy a plane with a bomb that sits on the ground and waits for people to trip its fuse.

When these dog tags were released there were cries of trolling on the part of developer DICE from the community. And, to be fair, they all appear to be out of the bounds of possibility for most players. At the same time, digging into the community's achievements, I realised that many of these impossible-seeming tasks had been performed by someone in the past.

Here's a video of YouTube user Dothraki-Shadow getting a headshot at 1063 meters back in 2016. To be clear, this is a setup shot that required cooperation between opposing teams, but it demonstrates that it is still possible.

And here's another video that appears to be completely organic that shows a panicking xniperxx getting a very good tripwire kill on a diving aeroplane last year.

Finally, the destruction of a giant mega blimp with the itty bitty small Kolibri pistol by Ravic.

What's so amazing about these dog tag unlocks is that they are exceedingly difficult to get organically, but they are not truly impossible. The big simulation that is Battlefield 1 is clearly robust enough that players can routinely enter into situations with one another that create the kind of scenarios that the dog tags are depending on.

Besides all of that, you decide what dog tags mean in Battlefield 1. The dog tag unlocks ask you to determine your own goals, and it's important to note that unlocking the Apocalypse super-hard dog tags only requires five out of six possible parameters.

You could just go work on your affliction kills and never worry about these long shot chances. However, DICE's developers haven't given the players a challenge that they're not up to, and I'm looking forward to the posts of people gloating about how they have gotten all four of these dog tags.