Fortnite Battle Royale's $10 Battle Pass Is Nice But Not Essential 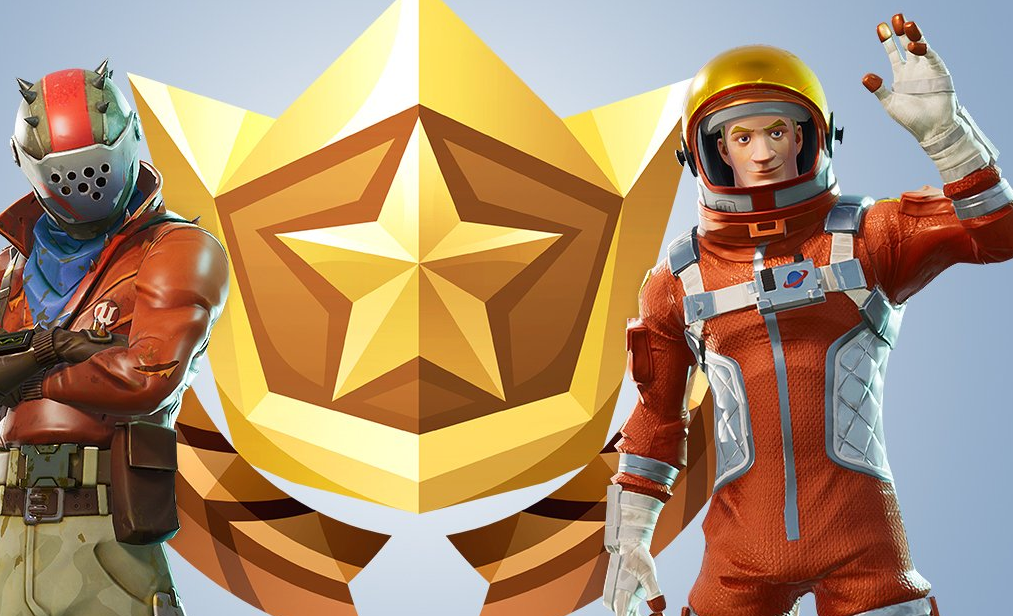 Games aren't made for free, so when they're sold for free, something's got to give, and a lot of the time, developers' solutions come off as skeezy or predatory. Loot boxes are passe. And don't even get gamers started on pay-to-win buffs. Free-to-play survival shooter Fortnite Battle Royale is doing something different, using a crowd-pleasing money-making mechanic that actually adds to the game without preying on its players.

Fortnite Battle Royale's Battle Pass is a system that players can (but don't have to) pay into to get a chance to get cosmetic rewards in exchange for levelling up and completing challenges - anything from full space suit outfits to the over-the-top "Take The L" emote.

Playing a lot, doing well and completing the challenges earns players new reward tiers, of which there are 100 in total. Players don't have to pay to participate in the Battle Pass challenges. There's the basic Battle Pass and, then, the Premium Battle Pass, which costs $US10 ($13) per multi-month season.

Players who don't pay for the Premium one (through Fortnite's V-bucks currency) will receive less interesting rewards when they gain tiers, like a saluting emote instead of "Take The L." After last season, which ran from mid-December to February 21, Fortnite developer Epic Games added in 30 more tiers along with 30 more rewards, and according to Epic Games, it should take between 75 to 155 hours of play to get to tier 100. 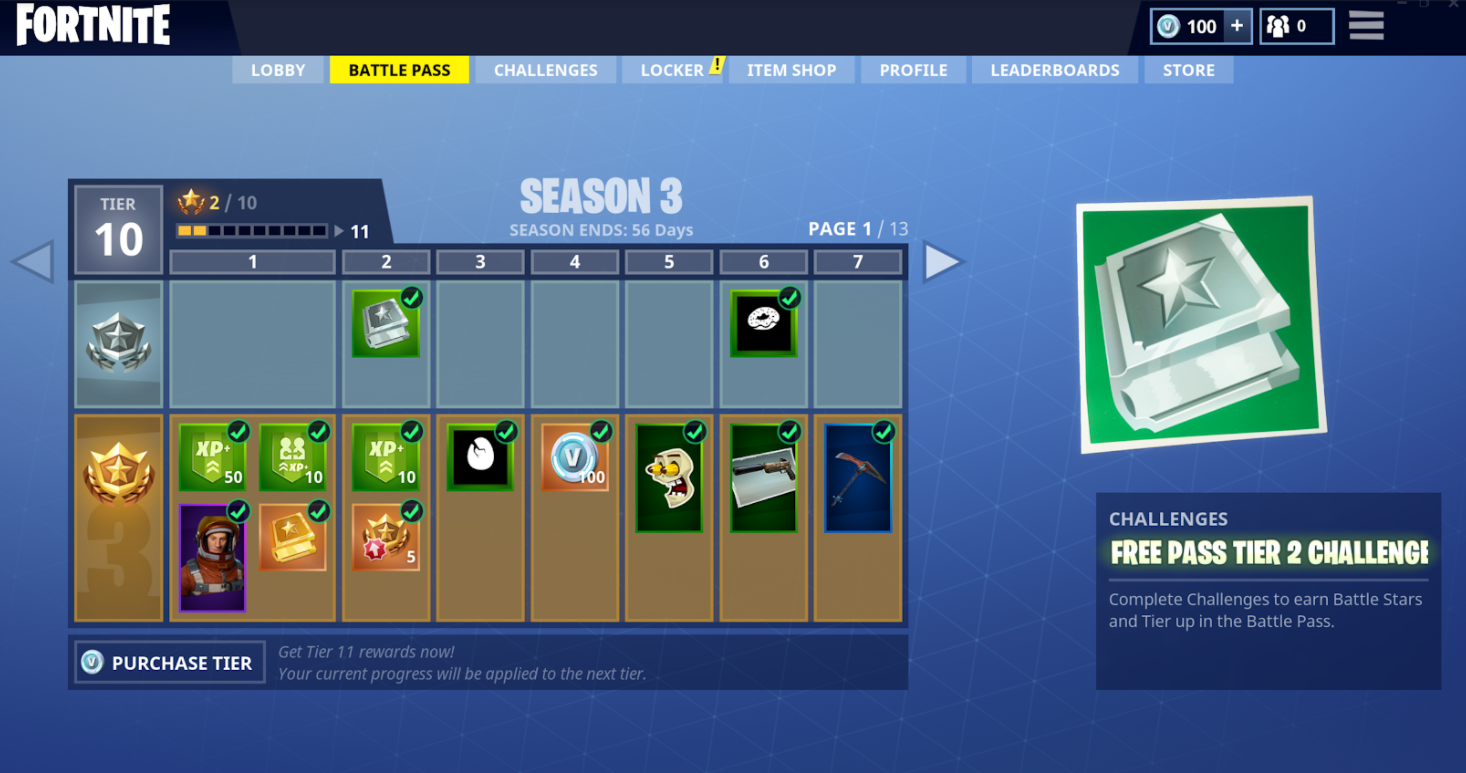 The challenges are immensely satisfying and help broaden my Fortnite experience. Seven weekly Battle Pass challenges give players incentives to get out of their comfort zones, which, in a chaotic genre like battle royale, can lead them to unconventional playstyles and strategies.

It's easy to drop in the same four or five places, look for your favourite few guns and fall into a boring, monotonous rhythm in order to deal with the game's anything-can-happen-ness. Challenges give me a structured way to experiment.

"Sniper rifle eliminations (0/2)" or "Deal damage with Assault Rifles to opponents (1/1,000)" got me to focus on getting proficient with these guns rather than finding something shinier or less risky.

Challenges like "Search chests in the Wailing Woods" got me to explore the nitty-gritty of a zone that isn't as popular as most others. Some of the challenges, like lasting until the top five in squads mode, got me to queue with randos more. Sometimes, I complete challenges without realising it. I accomplished "Play five solo games" without realising and was happy to get a reward.

The challenges change weekly and sometimes are tricky. "Search between a Pool, Windmill, and an Umbrella" tests players' knowledge of the map and keeps them looking out for landmarks. The challenge to "Dance in forbidden locations" - in hidden places where there are no dancing signs - is cute, but tempting to just look up online. 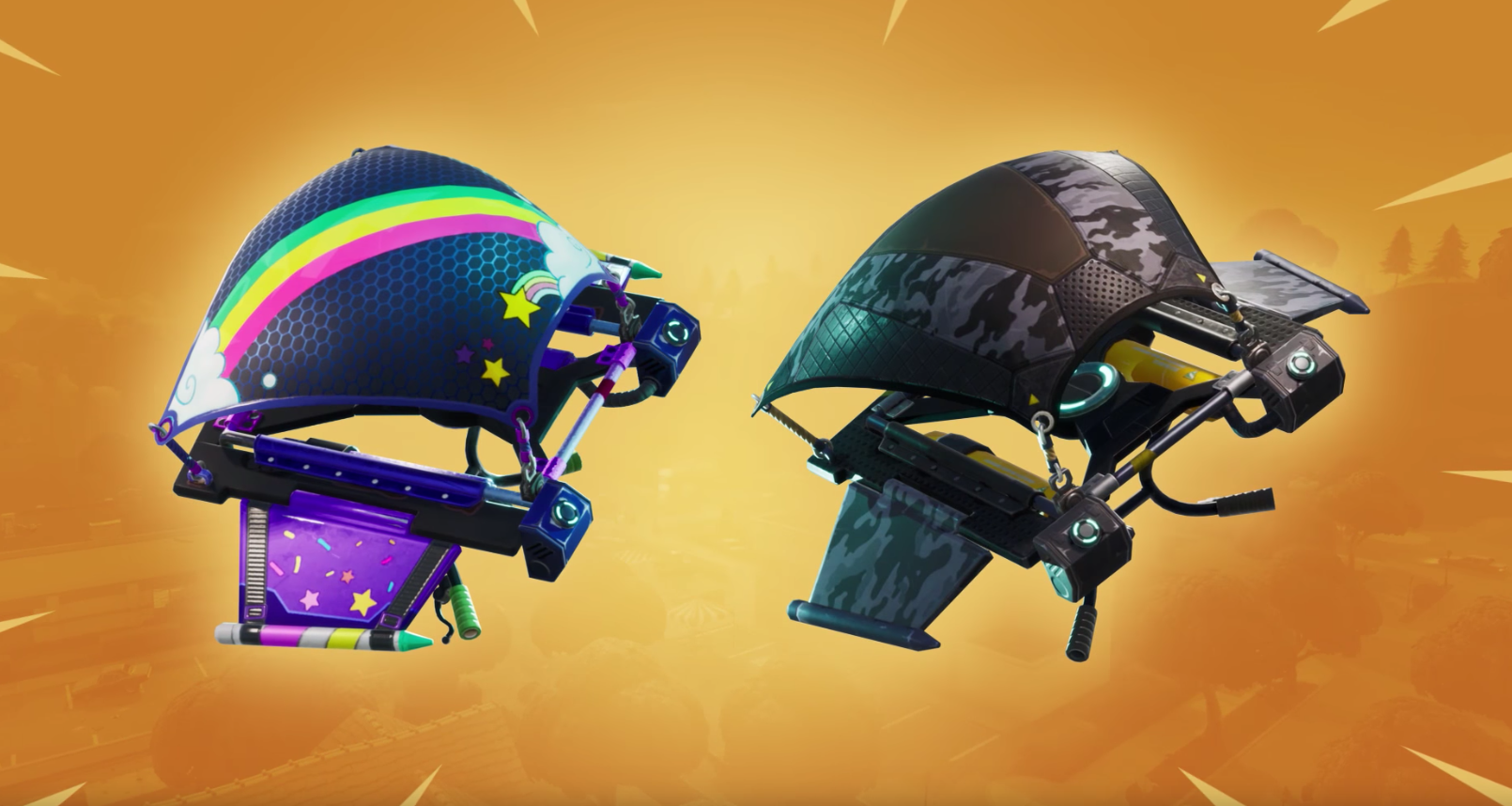 Thankfully, every player can participate in these challenges and varied challenges can lead to the same reward, since rewards are unlocked based on the points accrued from finishing challenges, not from specific challenges unlocking specific rewards. The only distinction in quality of rewards is between non-Premium and Premium tiers.

The rewards for Premium Battle Pass holders are significantly better (Players without the Premium Pass can also opt to purchase single reward tiers, but not if they haven't earned those tiers yet). I got an astronaut outfit just by getting the Premium pass. And I'm actually looking forward to getting more "contrails," or streams of stars or rainbows that flow behind your character when they skydive. Some of Fortnite Battle Royale's rewards are really cool.

It's a mirthful, lighthearted and expressive game, with sometimes ridiculous rewards, like a "Robot" dance. Many of the rewards, however, are crappy. The game offers "emoticons," small icons that players can summon above their heads. Some are cute - like a skull with its eyeballs bugging out - but I never see people do this in games and I never do it myself.

Is it worth it to pay $US10 ($13) per season to earn better rewards in a free-to-play game? The most valuable part of the Battle Pass, for me, is the challenges, not the reward. The challenges guide me through the game's sprawling map and item inventory. I can get the challenges without paying, since Premium simply tweaks the rewards, not the challenges.

A non-Premium player should scan the reward list and see if they have fewer than six tiers of rewards they'd want to unlock - and that they are sure they can reach.

One bonus of the Premium pass is that some rewards help get players through the tiers faster, bringing them closer to the rewards they want. Some of those rewards at the highest tiers are going to be hard to reach without the stat bonuses Premium users earn as they climb the ladder of unlocks.

Fortnite's Premium Battle Pass doesn't hide anything. All its rewards are out there and you know what you're getting and, essentially, when you'll get it.

Paying for it also doesn't affect gameplay. Free is better than paid, sure, but I'm happy to pay for a transparent payment mechanic just to prove loot-box-loving developers wrong: There's a way to monetise your free game without making players have a bad time.