Just-Revealed Superhot Sequel Is Free For Owners Of The Original

How To Filter Out Steam’s Sexy (Or Gory) Games 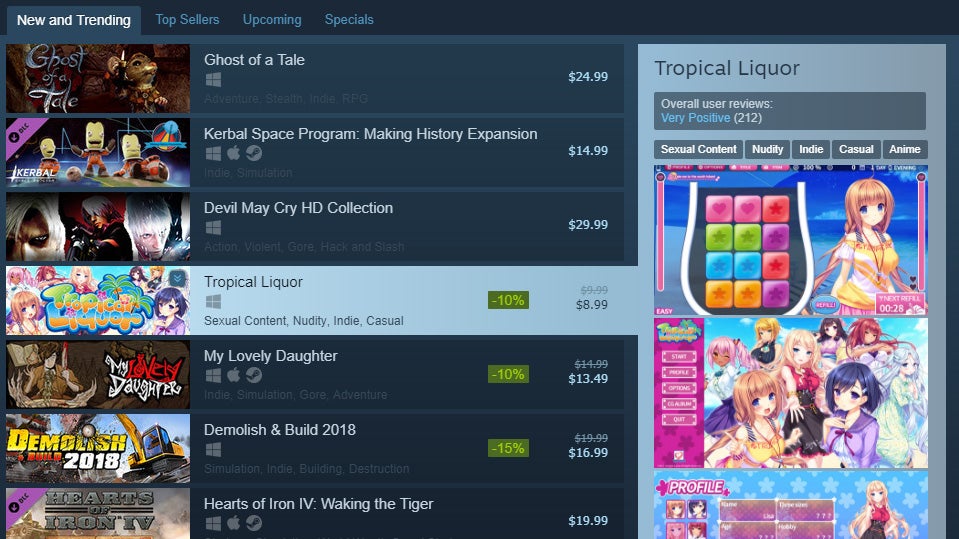 All I ever seem to see on the “New and Trending” list in Valve’s Steam service are games I know I’ll never play.

And then there are those weird sexy games.

In fact, as I write this article, the game Tropical Liquor sits near the top of my feed – another classic title that rewards you with anime characters who strip whenever you successfully complete a mini-game. (And don’t even get me started about Super Seducer, also appearing on the list today, or the flood of broken-as-hell Early Access games I regularly see.)

Thankfully, there’s a way to heavily filter the games you see on Steam, but it’s somewhat buried within Steam’s clunky user interface. Here’s how you do it.

Obviously, you'll want to click on that big 'your name', which will be your actual Steam account name. Screenshot: David Murphy

To personalise Steam’s store, you’ll need to first find the correct Settings menu. Don’t look under Steam’s Settings menu (Steam > Settings), nor your Profile preferences, nor even the “Your Store” link on Steam’s primary Store page. Instead, you’ll want to click on your account name in the upper-right corner of Steam’s UI and click on “Preferences”.

(Note to Valve: It would be great to be able to access all of Steam’s options from a single, easy-to-find “Settings” menu, which could include feed customisation. Just saying.) 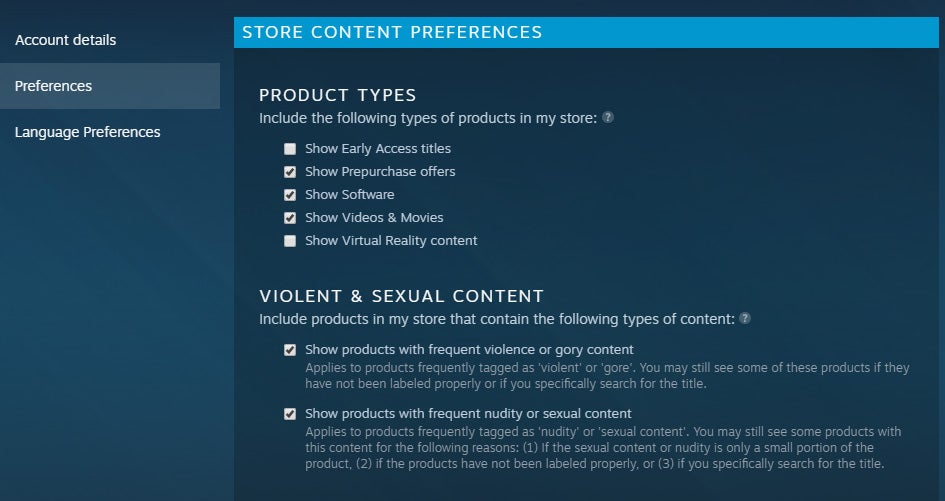 If you don't have a VR headset, no need to see VR content! Screenshot: David Murphy

Nothing against Early Access games – titles that might be beta-testing or in active development – but there are a lot of them and they can sometimes feel a bit overwhelming to view in Steam’s Store. And it’s perfectly fine to be the kind of person who prefers to know about games when they’re finished, not when they’re being worked on.

Within Steam’s Store Content Preferences, you can select whether you want to see a variety of titles in Steam’s store: Early Access games, preorders, software, videos, movies and VR content. If you aren’t interested in different categories – maybe you Netflix all movies instead of buying them, for example – just uncheck each category to remove its associated content from Steam. You can also elect to hide titles that are excessively gory or sexy, if one of those isn’t your cup of tea.

Filter out games by keywords

The “Tags to Filter Out” section in Steam’s Store Content Preferences is one of its more useful features. If there are certain types of games you have absolutely no interest in – such as “anime” games or “free to play” games – just type in the tag. You only get three tags to filter (sigh), so make them good. 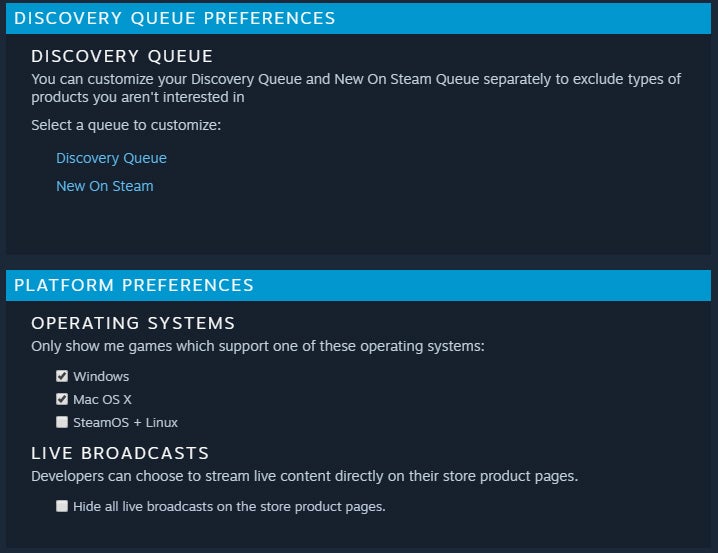 Again, if you don't own a Mac or Linux system, no need to see Mac- or Linux-only games (if such things exist). Screenshot: David Murphy

As you’ve probably noticed, the Store Content Preferences menu has a few other tricks up its sleeve. If you use Steam’s Discovery Queue or New Release Queue to find games that might interest you, you can adjust the content that appears in each. Filter titles you want to see by category – early access games, software, videos and unreleased games – or filter out particular tags you don’t care about. You can also remove games by platform if you don’t think you’ll ever play titles on a Mac you don’t own or a Linux box you have no intention of ever setting up.