Most of the time, you want your graphics chip running at maximum capacity so game performance is high. But when your GPU is idle? There’s no need for it to run hot and consume loads of power. In the case of NVIDIA hardware, this is handled automatically by drivers, but there are settings that can alter this behaviour.

By default, NVIDIA sets the power management mode of your GPU (be it in card or laptop form) to “Optimal power”. This setting was introduced into the company’s video drivers with the GTX 1080, specifically version 368.22 release in May 2016. 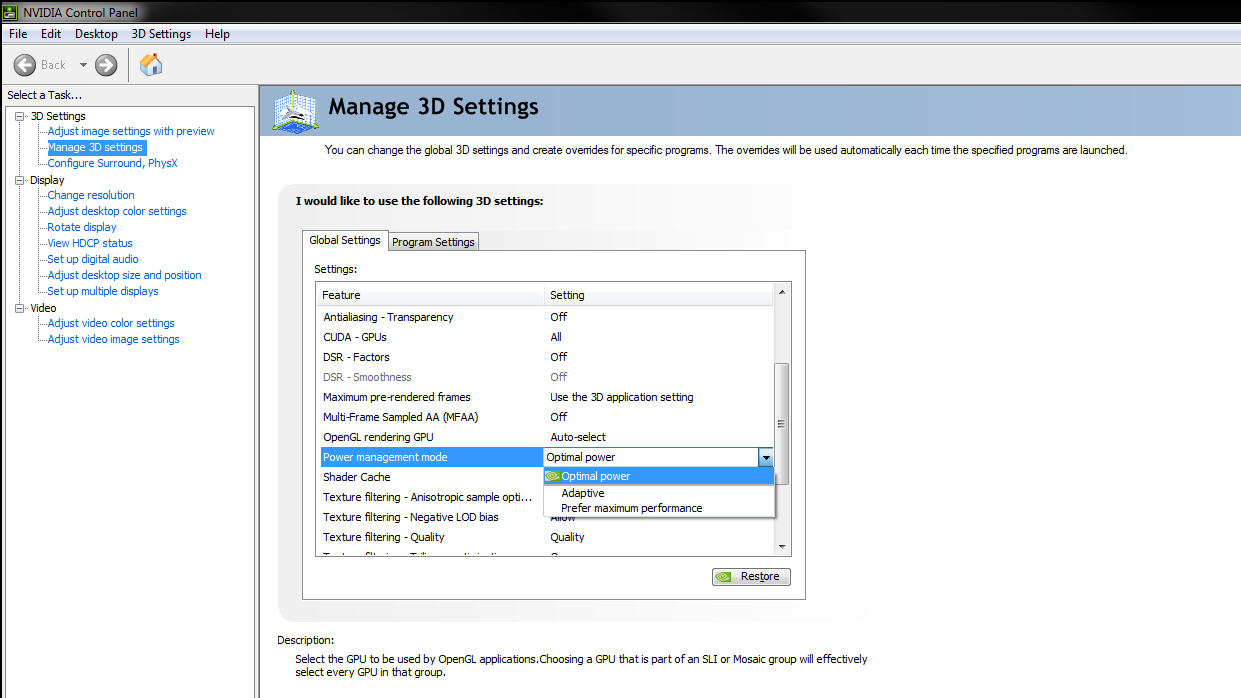 Optimal power superseded the previous default, called “Adaptive”. Both options will modulate the core and memory clock speeds and voltage of your GPU, increasing them during times of load and decreasing them when demand is low. However, Optimal Power adds another feature — it’ll stop the GPU rendering a new frame if nothing has changed on screen and instead reuse what’s already in the framebuffer.

Newer NVIDIA cards feature several more options, such as “NVIDIA driver-controlled” and “Prefer consistent performance”, but the only other choice you need to worry about is “Prefer maximum performance”. As the name suggests, this setting will run your card at its maximum clocks all the time.

Now, it’s tempting to hit up the driver’s global settings and set the power management mode to the aforementioned value and never think about it again. Unfortunately, this will increase the “idle” heat and power draw of your GPU, even when you’re not doing anything.

The NVIDIA Control Panel allows you to configure profiles for games on a case-by-case basis. For demanding games that don’t play well with Optimal Power or Adaptive, find (or create) the required profile in the “Program Settings” tab of the “Manage 3D settings” page. You can then use “Prefer maximum performance” for only those titles.

If you’re on a notebook, you’ll definitely want to make sure “Optimal power”, or at least “Adaptive” is selected in the global settings. While mobile GPUs have become very efficient in the last two years, every little bit counts.

Finally, for those who don’t mind getting their hands dirty, it’s possible to change the power curve of modern NVIDIA GPUs using MSI Afterburner.

This is a handy technique for notebook owners who want to undervolt their GPU, reducing its heat and power consumption. It takes a bit of trial and error to find the right setting that doesn’t cause your laptop to freeze or crash, but the benefits are well worth the effort.