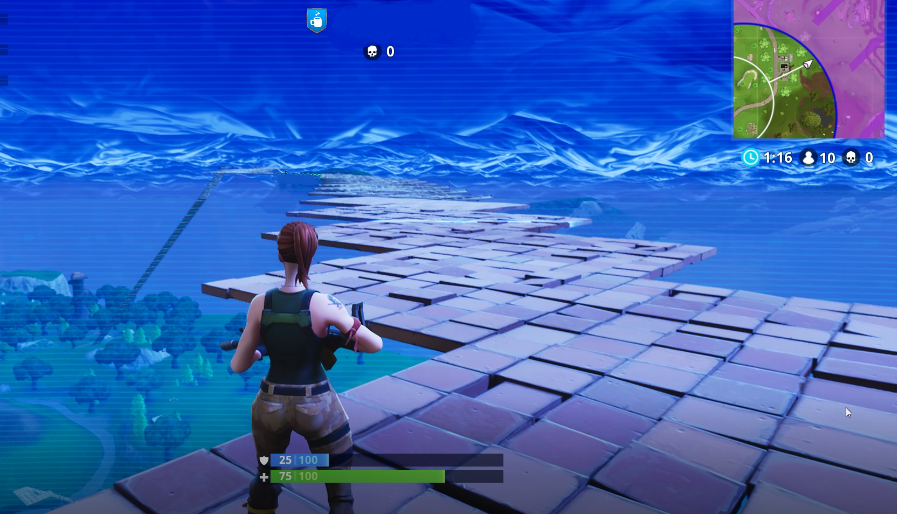 Among Fortnite Battle Royale players, there's an oral culture of trading tricks: Building zig-zag stairways along hillsides, searching every attic for hidden treasure, that sort of thing. It isn't all intuitive. Some things need to be taught. On Sunday, a buddy came over with his laptop and asked if I'd ever heard of Fortnite's "Stairway to Heaven". I said that I had not.

This buddy, my partner and I were cramped in my small home office, all playing the game on different computers. Our buddy had fallen in with some teenagers who knew everything about the game and, from the couch behind us, relayed their tricks for all occasions. We learned never to hack down entire trees, lest we give away our location. We learned to catch ourselves after we'd fallen off a cliff with a hastily-constructed wood floor. Now, it was our final game, time to go out with a bang. 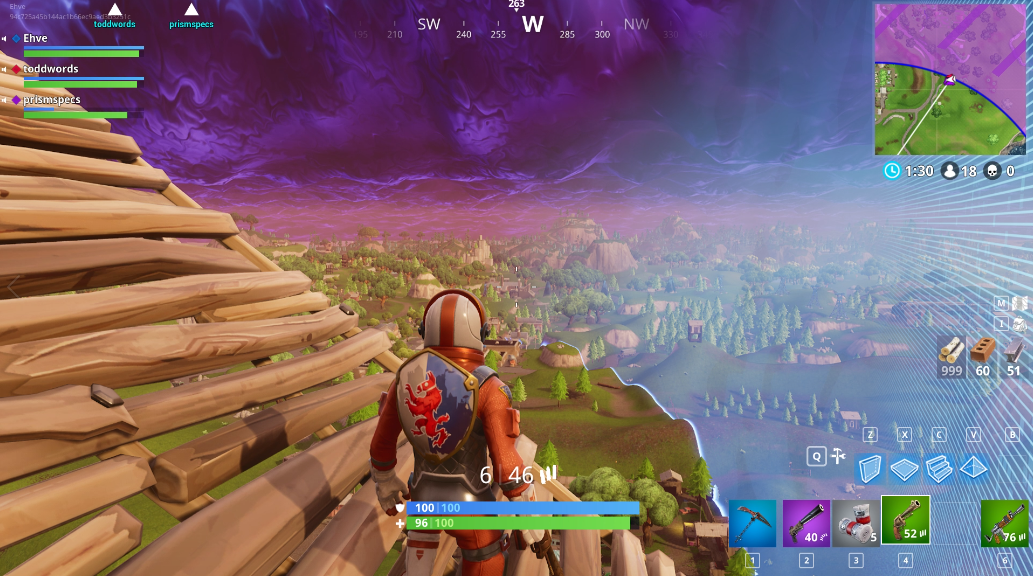 The "Stairway to Heaven" has several stages. First, we'd drop onto the Lonely Lodge, a cabinesque area dotted with trees. We needed to collect guns. Then, we needed to collect wood - more wood than I'd ever had the fortitude to mine. We'd max out our inventories at 999 wood. Hopefully, no one would kill us first. Then, we'd get to building. Our friend explained that the base of the "Stairway to Heaven" should be situated just outside the playable area, so it wouldn't be an easy target. Gesturing with his hands, he described the architectural abomination: A stairway that went as high as you could build, and then, a sky platform stretching over the playable area.

Nobody would think to look up. That way, we'd win inconspicuously, high above the forts where our opponents lay in wait. It sounded ambitious. Because Fortnite Battle Royale rounds are short, and because it's quick to get into another game, there's a huge incentive to do stupid, ambitious shit exactly like this.

We parachuted down to the Lonely Lodge and, immediately, I stumbled upon an Epic-level Suppressed Pistol. Yes. I fortified myself with a Chug Jug and grabbed an Uncommon Revolver and Burst Assault Rifle from a golden treasure chest. Surely, it would be a long game. 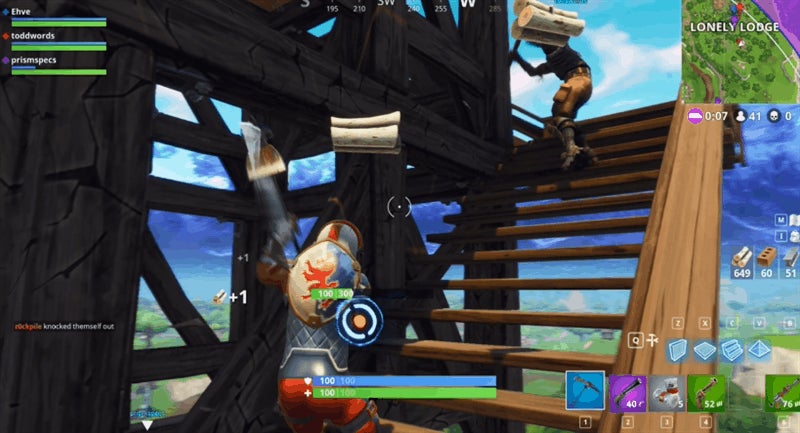 Like termites, we swarmed the Lodge, which was totally empty except us, tearing down everything wooden we could find. Windmilling our axes up the Lonely Lodges' behemoth skyscraper, we'd each collected 999 wood 10 minutes after landing. It was time to start building. We waited until the playable area's borders shrunk to exactly our location and began constructing an endless pathway of wood stairs. As it closed in, and finally stopped, a small portion of our stairway stuck out just outside the border. That's where we were perched. Who would look up here?

It was my turn to take over building the staircase. After a pause, I ran upwards as the wood began forming stairs in front of me. Then, something happened. I had moved onto a portion of stairway that had not yet solidified. My feet fell right through it. "Oh, nooooo," I yelled on my five-second fall downwards. My teammates cackled in the background. My body landed with a crunch. "What do we do?" I pleaded. "There's nothing we can do," our friend said stoically as the storm closed in on me and my 999 virgin units of wood. My Epic-level Suppressed Pistol popped out of my inventory, never to be used. 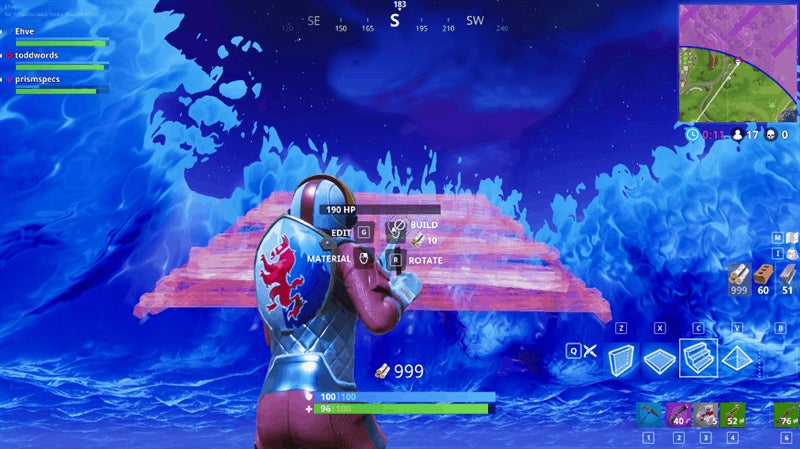 Meanwhile, my partner and our buddy had hit the game's height limit and were dutifully constructing a platform overtop Retail Row as, again, the storm chased them. The storm was moving faster than they could construct the sky platform and, moments after it consumed me, it consumed my partner, too. He died with a chuckle. It was all on our buddy, who, nearly out of wood, was desperately running on fumes into the playable area. When he made it, he had 14/100 health and, without wood, just enough bricks to keep his platform in the playable area for another minute or two. 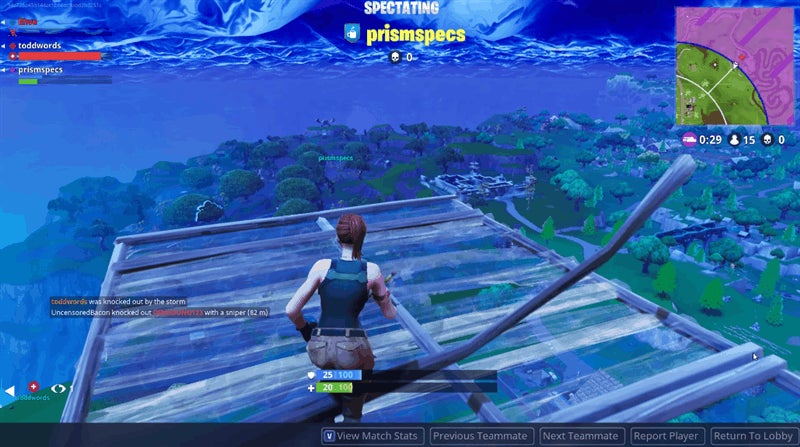 Twelve people were left. "You might do it," I said as he healed himself and pulled out a shotgun. He was on the sky-bridge, high over everyone else. He moved forward as the area shunk more and more, stretching further into the map's centre. Ten people remained. Then, there was a sound like an aeroplane, a low whoosh. And an explosion. Holding his drafting template in his hand, our buddy fell six seconds downwards. He shot a few futile rounds from his shotgun before his body landed in a pile of ammo and bandages on the ground below. We had no idea what happened. And we had placed fifth.

I will attempt this strategy many more times. I will never win with it. I will never know why I do it, and it will always be amazing.