I Won A Game About Lying By Telling The Truth

A good game of Subterfuge can last weeks as players seek to steal territory and destroy their opponents. It’s a mobile game of deceit, backstabbing, and half-truths. This weekend I won my first game, and I barely needed to get my hands dirty at all.

In Subterfuge, up to 10 players seek to control aquatic factories and bases into order to harvest a chemical element called Neptunium. In order to win, a player needs to gather 200 units of Neptunium or else have their queen survive until everyone else’s is captured.

Players can see different parts of the map, so more often than not, winning means organising large scale offensives and tricky strategic manoeuvres that need to be perfectly timed — actions in Subterfuge can take upwards of 24 hours to complete. I won by mostly playing nice.

At the start of the game, I expanded to establish a modest collection of outposts and power generators before contacting each of my neighbours over in-game private message. We agreed on specific borders that neither of us would cross and, in some cases, I even granted outposts to other players as a gesture of good faith. My goal was to rock the boat as little as possible, only encountering trouble when a neighbour to the south attacked a generator I held.

I drove them off and we agreed to a truce as players further south began to battle each other. This left me with entire days where all I did was build up my own fleet within safely-defined borders, making allies with nearly everyone around me.

The only exception to this was a player to my west, who for the sake of discussion I will called The Captain. The Captain had played numerous Subterfuge games before and seemed, to me, something of a Napoleon figure. Given enough time, he would certainly build up forces to make a move on vulnerable fronts, likely my own territory. For a time, we built up massive fleets on our borders until I contacted him with a proposition.

“It seems time to talk about de-escalation at our borders,” I said. The Captain agreed and I was once again free to build up my own fleet even though other players were gaining more territory.

Shortly after this, other players began attacking The Captain. Having kept good relations with the players who also bordered The Captain, I initially abstained from fighting until I sent a small force to distract him from my allies. In time, The Captain was contained to a single outpost. It was the one major offensive action I took during the game.

By now, days had passed and players were starting to mine for Neptunium. Further south, a player I’ll call Killer had amassed a major portion of territory. When players are lower in the standing, higher ranked players can “fund” them, increasing how quickly they generate new miners and subs.

In an effort to crush other players, numerous people had funded Killer so that he could win a proxy war that functionally destroyed another player. But this meant that Killer was well on his way to mining enough Neptunium to win. Seeing an opportunity, I contacted the many allies I’d made throughout the match. 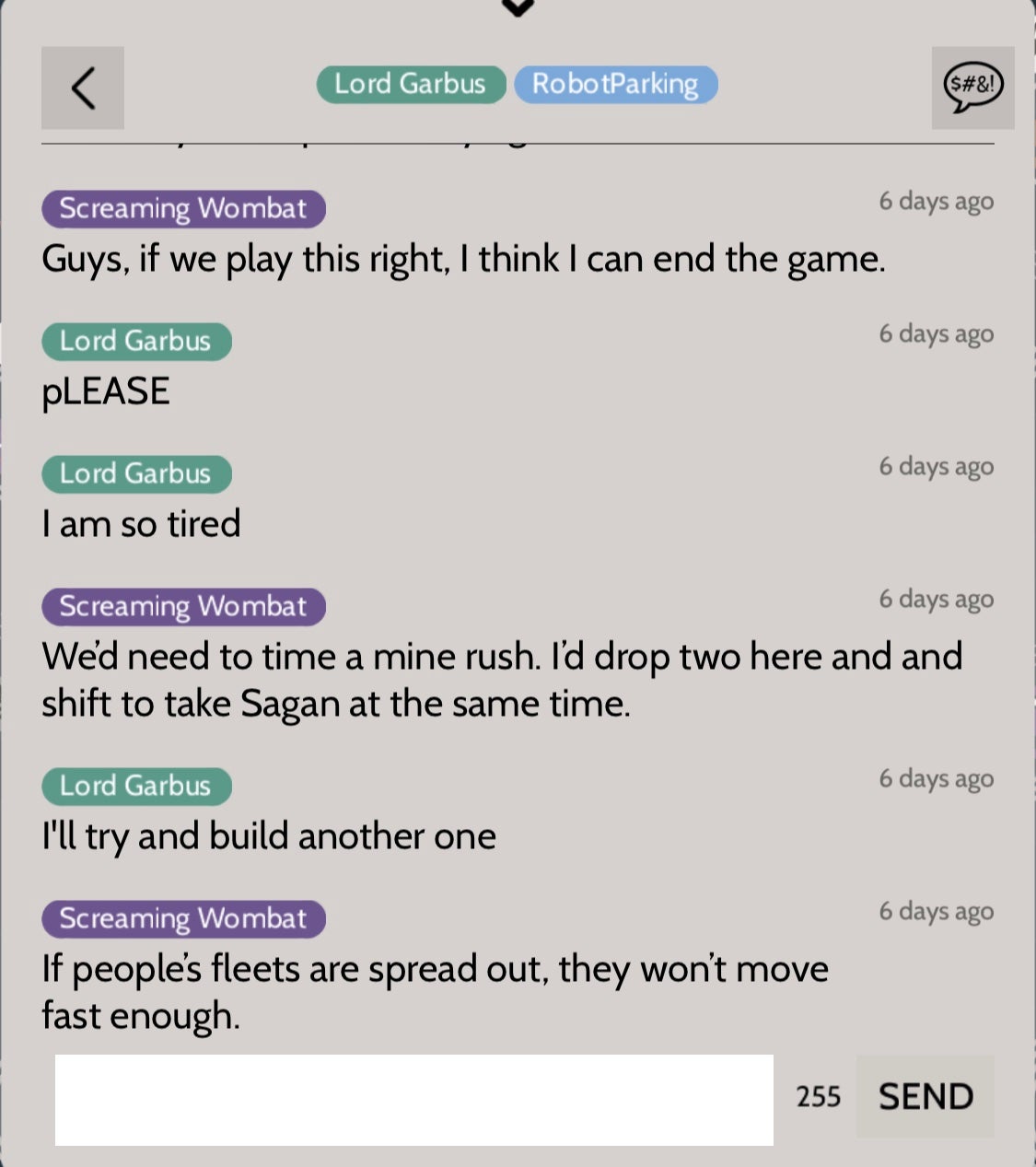 I thought about blurring out these names but honestly, this isn’t even everyone who ended up in my pocket.

I would soon gather even more after this, all eager to end the game. We hatched a plan. I would start to create my own mines to collect Neptunium but three other players would allow me access to their own mines as well. Timed correctly, I could end the game in 48 hours after nearly two gruelling weeks of constant play.

This functionally started a pacifist ‘arms race’ to generate Neptunium as Killer began to create mines at a breakneck pace. Meanwhile, I sent subs to take my allies’ mines. These moves sometimes took over 30 hours to complete, but I slowly began to gain enough facilities to outproduce Killer.

But there was a problem: The Captain launched one final sub towards one of my mines and could capture it for about two hours before I could get it back. In theory, this was enough time for Killer to outproduce me. Fortunately, I had launched a sub 40 hours earlier that would arrive at an ally’s mine with about six hours left in the game. Even with The Captain’s attempt to spoil my production, I would be able to produce more Neptunium than Killer.

A handful of time passed and I won the game, largely because I kept on friendly terms with all of my neighbours. At no point during the game did anyone truly try to invade my territory. I was, apparently, too docile to be a threat.

To be fair, I engaged in one final act of subterfuge. When a player pushed out of their territory asked for refuge at one of my outposts towards the end of the game, I decided that I needed the extra production that facility provided. Instead of letting them hide in my territory, I kept the shield on my outpost up and their queen died crashing against it.

In a game noted for backstabbing and lies I was mostly honest. Trusting in the better angels of my neighbours, I avoided conflict and instead forged an alliance of friends who helped me win the game using cooperation. Subterfuge often descends into all-out war, but I had won by being a true and proper diplomat.