In my last diary entry, I discussed my love for good mysteries. This week the first episode of an intriguing game called The Council came to Steam, full of tense conversations and supernatural phenomena. It even lets you be best buds with George Washington. But what I like best is its conversational minigames.

In The Council you play as Louis de Richet, a member of a secret society who heads to a private island alongside several other prestigious guests at the request of an enigmatic lord. The opening doesn’t have much exposition, so you’re left to cobble together Louis’ backstory while meeting the island’s other guests.

While others are on the island for their own reasons, Louis is looking for his mother. (He frequently refers to her as just “mother,” which made me giggle pretty often.) As you spend more time with the guests, you learn how Louis’ mother disappeared seemingly overnight, and how anyone could have had a hand in it. Everyone on the island has a hidden agenda, and anyone could be a suspect.

It’s a little goofy at times in how it plays with history; characters like Napoleon Bonaparte drift into scenes. But what really surprised me was how The Council portrays the tension of high-society conversational warfare.

While regular dialogue progresses through simple inquiries on a chat wheel, now and then Louis has to engage someone in a Confrontation. Think of it like a narrative boss battle. Louis has a benefit he’s looking to gain, such as trust or a vital bit of info, but the person he’s talking to will resist or test him. You have to get through each “step” to convince them, through logic, intimidation, or even simple honesty. Answer incorrectly and you make a blunder, and enough of those will fail the Confrontation, meaning some consequences for Louis such as losing out on information or even a real, permanent scar. 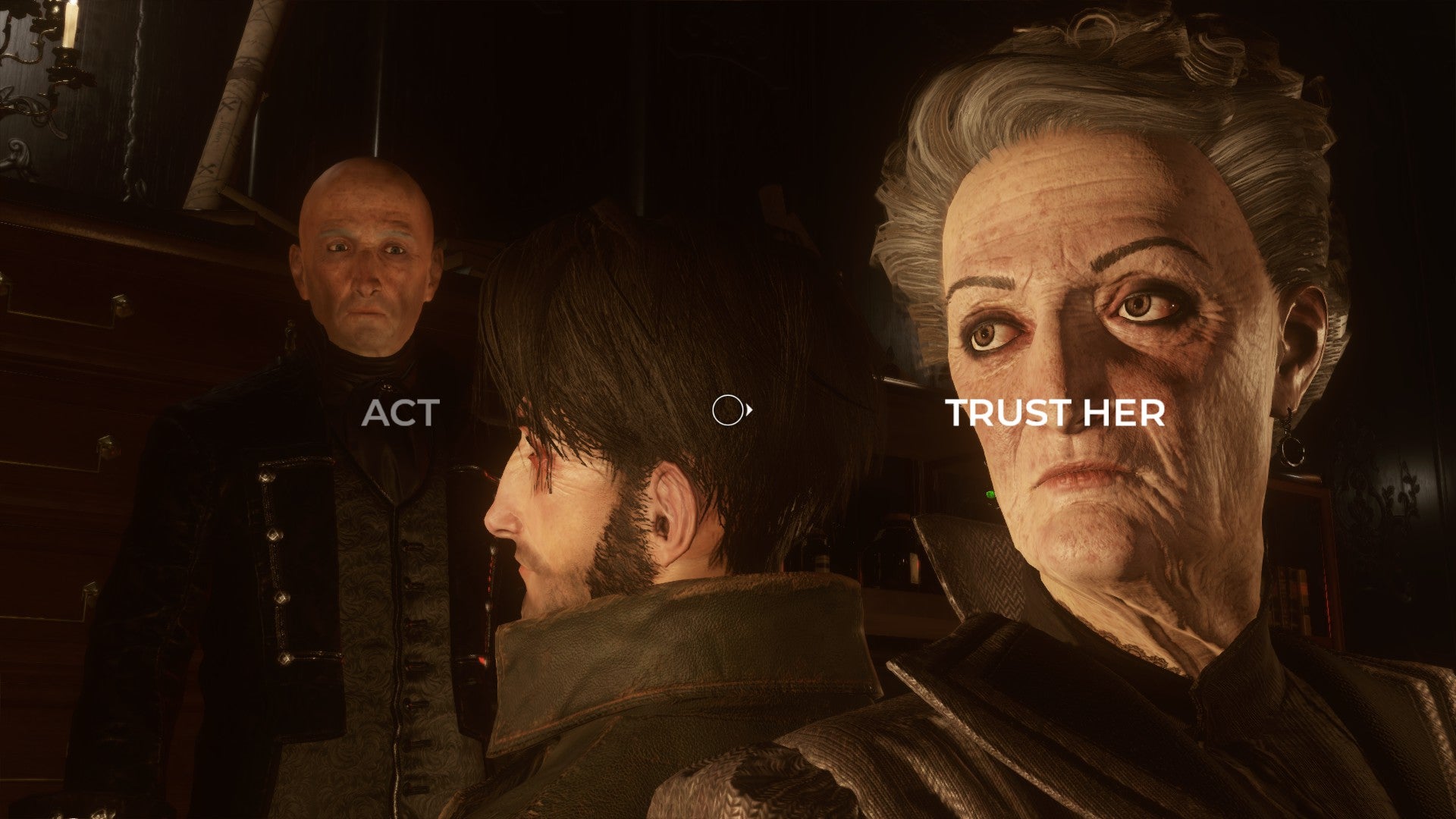 Each character requires a different approach. The Council has many ways for you to win Confrontations, but you have to utilise your strengths. At one point in the story, I was trying to win a character’s trust. I had convinced her of my honest intentions by subverting her accusations that I was just looking out for my own interests. (I was.) But to tear down that last wall, I needed to connect on a personal level.

At the beginning of the game, you choose a specialisation such as occultist or diplomat, and you can level up in other ones through the game by reading books or investing skill points. Because my Louis is a detective, I was able to use a clue I found when I snuck into the character’s room earlier in the episode to appeal to her emotional side. I knew that while her whole family wrote her, it was her sister who cared the most, and so I made an appeal based on that. I reminded her of the importance of family, so she would tell me more about Louis’ mother and where she might have disappeared to.

Those techniques won’t always work. Some characters have immunities to certain approaches, like psychology or logic. Others have weaknesses and will cave immediately if you use the right tactic. Discovering those pathways requires investigation and a little intuition, gleaning traits from previous conversations you might have had with them. 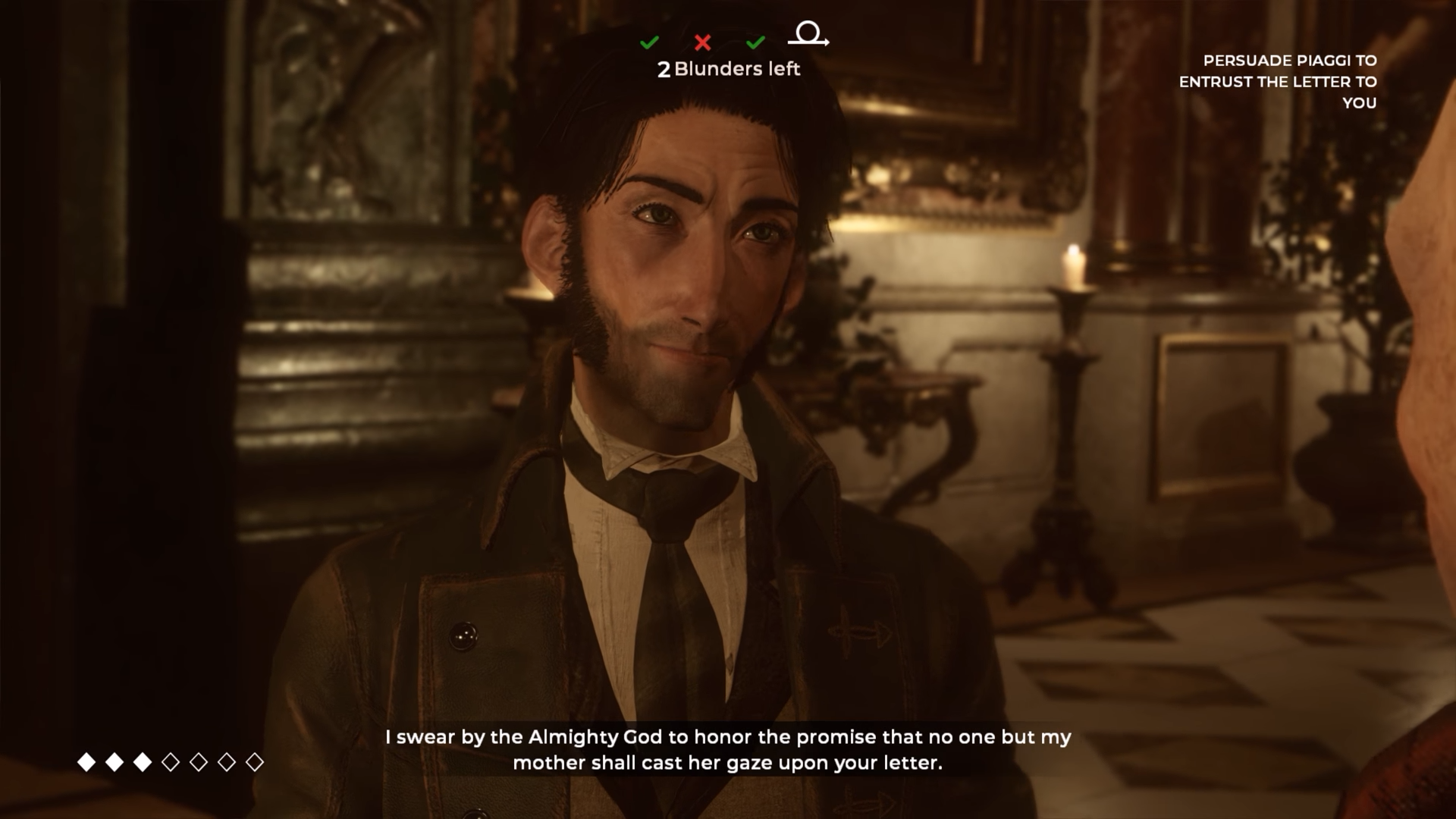 The Council is essentially an attempt to turn Dragon Age‘s “Wicked Eyes and Wicked Hearts” into a narrative, episodic game. There isn’t any combat, just intrigue and deception. Navigating around disaster means mastering many skills that wouldn’t seem obvious at first. While my skills will (seemingly) carry across from episode to episode, at the outset, my Louis wasn’t the most capable investigator.

I missed out on certain events the first time and didn’t perfectly navigate every Confrontation. Now, I’m tempted to go back and replay it, to find where the story might have gone if I’d been a little more silver-tongued.The Council‘s first episode is a fresh approach to the usual spider’s web of narrative game dialogue with consequences, and I’m really looking forward to what the developers do with the system they have built.